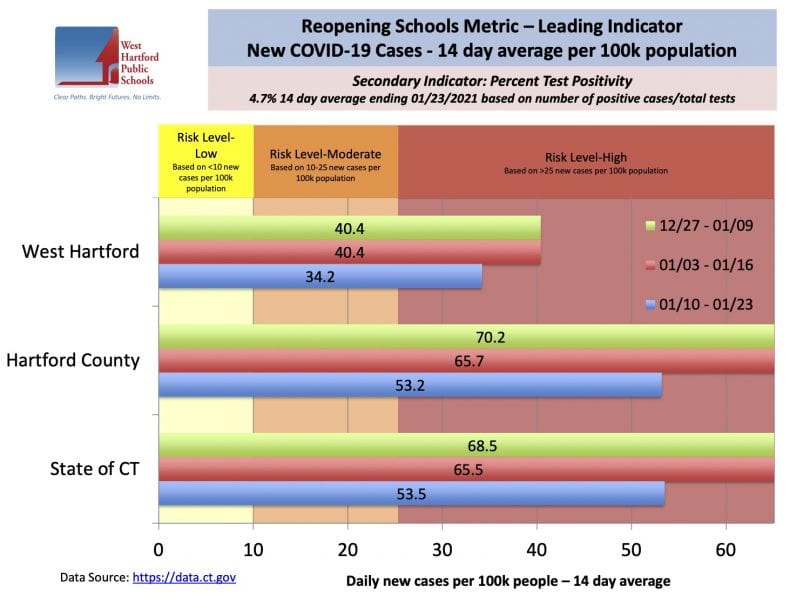 West Hartford Public Schools administrators are not sounding an alarm about the more contagious COVID-19 variants, and say there are no plans to move students to online learning.

The West Hartford Public Schools administration is confident in mitigation strategies that are in place, and said Friday that there are no plans being considered at this time to scale back the current models due to more contagious variants of COVID-19 that have been found in the United States.

“That’s not the messaging that was there,” said Assistant Superintendent of Schools Andy Morrow, who was on a call with superintendents from throughout the state on Thursday when state epidemiologist Dr. Matthew Cartter spoke about the more highly infectious strains of the coronavirus. There have been eight cases of the UK strain confirmed in Connecticut, though none are in the Hartford area.

The message Morrow said he heard from Cartter was: “Schools should be the first to open and the last to close.”

“The mitigation strategies are just as effective,” Morrow said.

Although some other superintendents may be sending a different message to families, Morrow said West Hartford’s administration is not planning on having to close schools in March. Of course if the case numbers do increase dramatically there may be a need to modify the current plan, he said, but that is not expected.

During a press briefing Thursday, Gov. Ned Lamont was asked by reporters about the need for further restrictions due to the more highly-contagious variants. “Right now our vaccines are going to be able to stay ahead of the risk we see there,” he said. The governor said he thinks the variants represent only a small number of cases in the state, and said that if he’s confident that if the state continues to receive the number of vaccines doses that have been promise, “we’ll be in school in March.”

Superintendent Tom Moore said the number of cases in West Hartford have been declining, and while the district is watching the spread of the variants, the Department of Public Health has said the same mitigation strategy will work.

Morrow said that according to data provided by the state Thursday, West Hartford’s positive case rate per 100,000 of population for the most recent 14-day period has decreased, from 40.4 – where it had stood for two weeks in a row after having been in the 50s –  to 34.2. The most recent data reflects positive cases for the 14-day period Jan. 10-23.

West Hartford’s positivity rate indicated by the state for that same period was 4.7%, down from 5.3% for the previous reporting period.

“It’s clearly trending in the right direction after the holiday bump,” Morrow said.

Statewide, positivity rates have continued to drop this week, with Friday’s report indicating a rate of 3.64%, and the seven-day rolling average, which had exceeded 7% a few weeks ago, dropping to just above 4%.

The town’s metrics have remained more favorable than metrics for the county and the state as a whole. In its most recent report, the West Hartford Bloomfield-Health District has reported a rate of 3.11 for West Hartford for the week ending Jan. 26.

West Hartford continues to provide daily updates on COVID-19 cases on its dashboard. Friday there were 34 cases overall among students and staff, down slightly from the number of cases the previous Friday when there were 37 cases.

While Morley Elementary School had indicated 12 active cases earlier in the week, Moore said the vast majority of those cases had been expected because they involved individuals who were already in quarantine. Specifics cannot be provided due to privacy concerns, but Moore expressed confidence in the contact tracing and the district did not think additional strategies were required.

Morrow said the district’s goal remains to bring all of the schools back to full in-person learning during this academic year.

While Phase 1B vaccinations have started, eligibility in that phase has only opened up to individuals ages 75 and older. Teachers, as essential workers, are also in Phase 1B, and Lamont said Thursday that when there are enough doses available to begin vaccinating essential workers, “teachers will be near the front of that group.”

Morrow said the school district has been working with the West Hartford-Bloomfield Health District and has plans to vaccinate as many as 500 teachers at a time during a clinic as soon as they are eligible and have doses available.

While trends may be positive, Morrow urged continued vigilance with mask wearing and distancing.

“I understand fatigue, but we have to be always aware of what we are doing,” said Morrow. “I think we’re in a good place.”