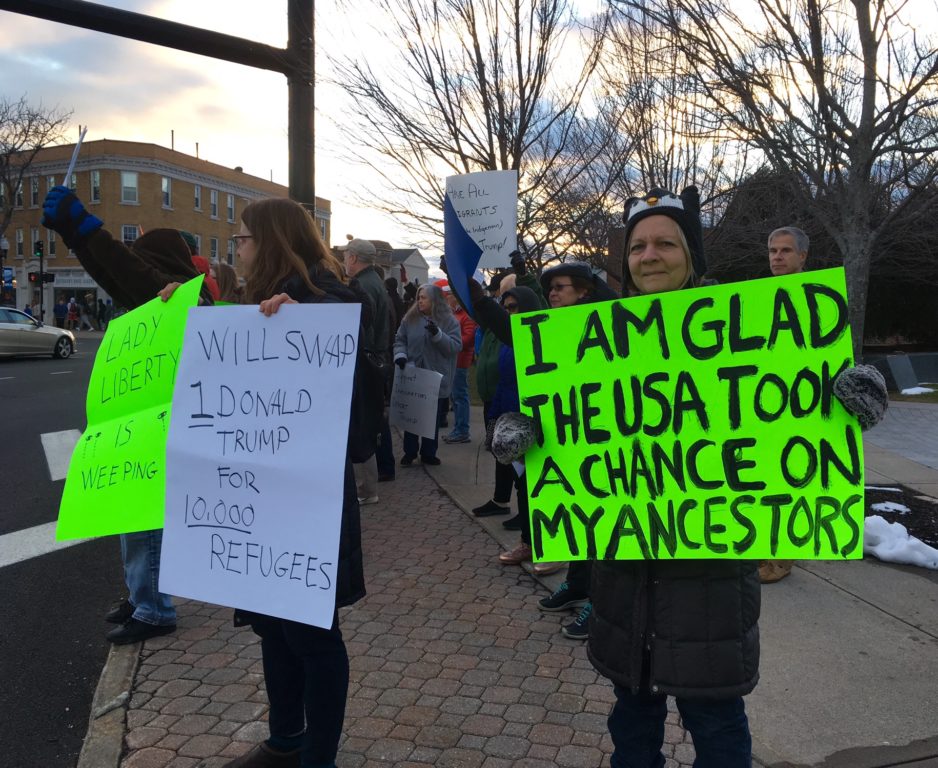 “This land was made for you and me,” sang a group of at least 75 people gathered in front of the Veterans Memorial in West Hartford Center Sunday afternoon as passing cars honked in support of their words and the posters waved in protest of an executive order issued by Pres. Donald Trump on Friday restricting the country’s immigration policy.

The grassroots effort in West Hartford was organized just hours earlier by West Hartford resident Ruth Goldbaum, New Britain resident Frank Gould, and Hartford residents Pearl Granat and Kevin Doyle. Goldbaum said she is part of a local group called “Welcome Our Neighbors” (WON) that is working with the Hartford Area Neighbors Alliance (HANA) through the New Haven-based Integrated Refugee and Immigrant Services (IRIS) to support a number of refugee families coming to the area.

“On Thursday we were ready to give the green light. Now everything is on hold,” she said.

The family is waiting in a refugee camp in Jordan, she said. “It’s a tragedy.”

Rallies and demonstrations continued throughout the weekend at airports as well as in cities and towns. At Bradley International Airport, many West Hartford residents joined a group of more than 2,000 who filled the baggage claim area of Terminal A from one end to the other, chanting, singing, and waving signs in protest of the president’s policy.

Town Council member Ben Wenograd was at Bradley Airport before heading home to West Hartford to join the local rally. He said it was peaceful and very friendly, and was thankful to the airport administration for their cooperation.

“I started crying. I was fighting tears because of how beautiful it was with the people all together combined with being so horrified about what’s happening to my country,” Wenograd said.

“It’s great to see so many people come out in West Hartford to support immigration rights, especially on such short notice,” McGuire said.

The rallies are working, McGuire said.

The ACLU filed a lawsuit as soon as citzens from the banned countries began being detained at airports and prohibited from boarding planes to the United States, and a federal judge granted a nationwide temporary injunction on Saturday.

“The ACLU lawsuit provided temporary relief,” said McGuire. “This is going to be an ongoing battle and this is just the start of this. People need to remain mobilized. Our judicial system works and we will be heard.”

McGuire said that from the ACLU’s perspective, the executive order is “discriminatory and unconstitutional,” and seeing so much support from citizens will help with the pushback. “These bigoted immigration polices are wrong. Our country values religious freedom and equality.”

West Hartford has shown it is welcoming, and has accepted multiple Syrian refugee families, said McGuire. As a whole, the state has been welcoming, and Lt. Gov. Nancy Wyman and Atty. Gen. George Jepsen spoke to the crowd at Bradley Airport voicing their support for the effort, McGuire said.

Gov. Dannel P. Malloy issued the following statement Sunday in reaction to the public protests: “I applaud those taking action today for seeking to give voice to fairness and compassion. I also applaud the swift legal action taken yesterday by the American Civil Liberty Union and other advocates on behalf of not just those directly impacted by this order, but on behalf of all Americans. This executive order conflicts with rights guaranteed by the Constitution of the United States, and it must be contested in our courts. As a nation of immigrants, inclusivity and compassion are the hallmarks of who we are. We will not abandon our values. In the face of grave injustice, we will be neither silent nor idle, but stand ready to protect our neighbors and communities.”

Information about the West Hartford rally – a completely grassroots effort – was spread through email and social media. The group of protestors grew in size as the afternoon progressed. “It’s a tribute to our community,” said Goldbaum.

Many cars honked, and one many stopped at the light at North Main Street and Farmington Avenue opened his car window and said he was a refugee.

“No hate, no fear, immigrants are welcome here,” chanted the crowd.

“Two-four-six-eight, refugees welcome at our gate.”

“This is what democracy looks like,” shouted the crowd. 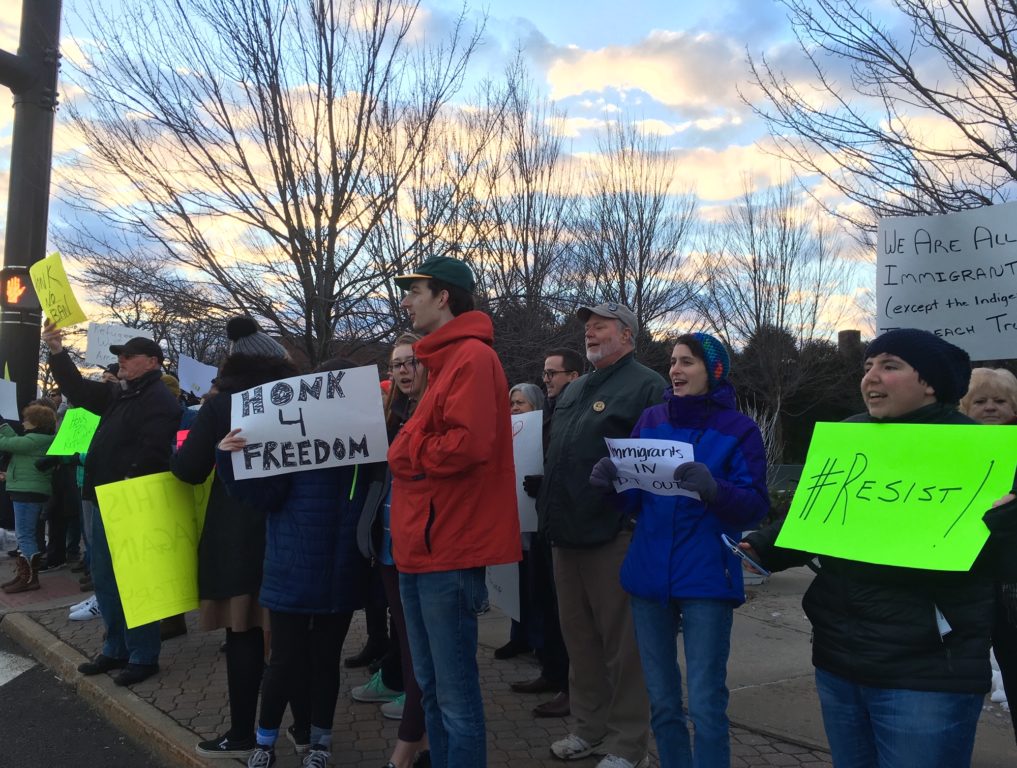 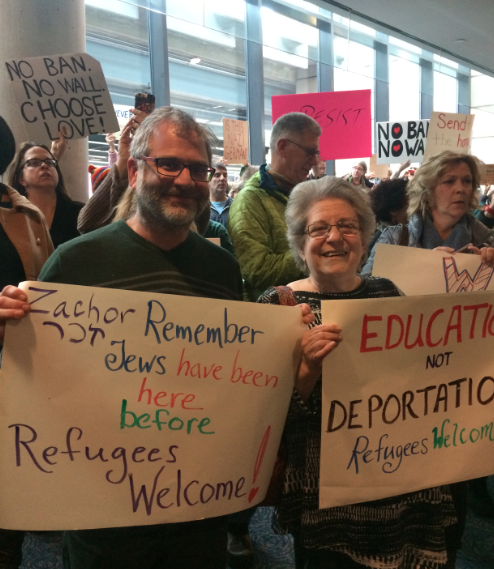 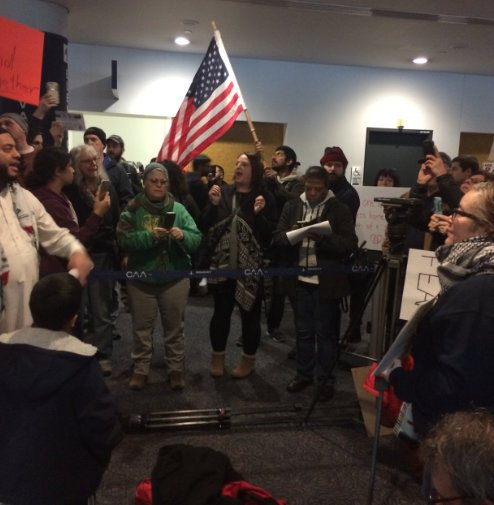 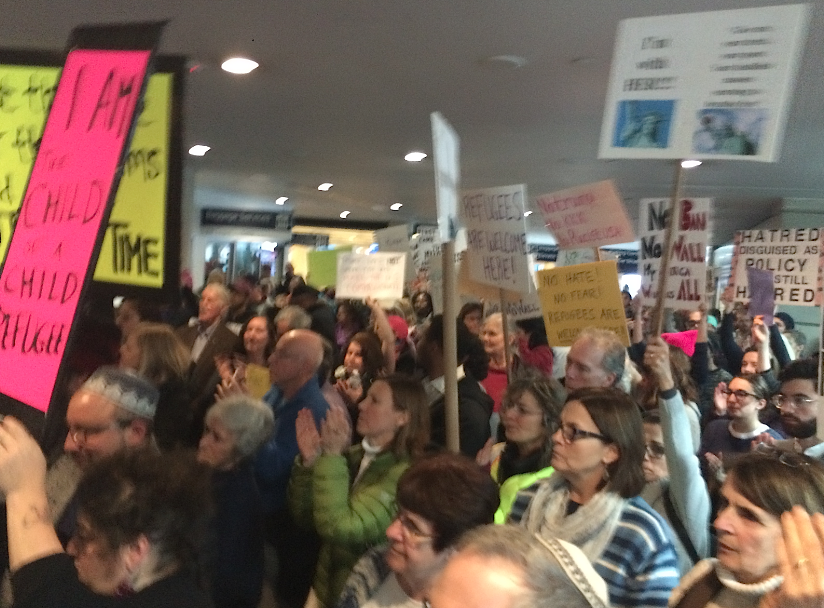