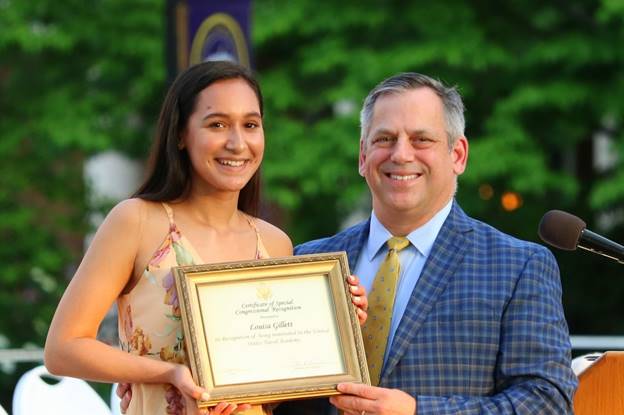 Louisa Gillett has been accepted Accepted to the United States Naval Academy Prep School in Newport.

Gillett was one of about 16,500 students nationally to apply to the Naval Academy and one of approximately 250 students to be given the opportunity to attend the prep school. Candidates must both qualify for Naval Academy admission and earn a nomination as part of their application.

Upon successful completion of the curriculum that includes study in calculus, chemistry, physics, and English, as well as basic military instruction, she will have the opportunity to earn an appointment to the Naval Academy’s class of 2023.  An appointment to the United States Naval Academy is equivalent to a full four-year scholarship including all tuition, room and board, medical and dental benefits, and a monthly midshipmen stipend. After completing the four-year curriculum at the Naval Academy, students receive a Bachelor of Science degree in one of 25 majors and earn a commission as an officer in the United States Navy or Marine Corps.