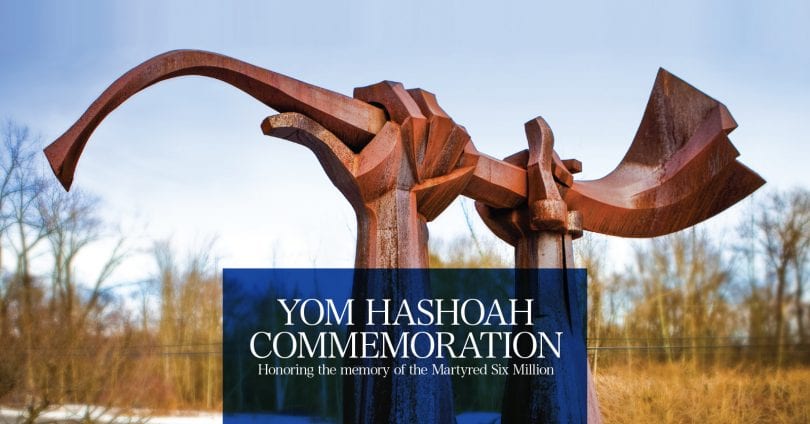 Holocaust survivor Abby Weiner, and his daughter Gayle Temkin, will give testimony on April 15 at the Yom Hashoah Commemoration/Holocaust Day of Remembrance in West Hartford.

The Mandell Jewish Community Center and Voices of Hope invite the community to remember the victims of the Holocaust during a Yom HaShoah (Day of Holocaust Remembrance) commemoration on Sunday, April 15, 2018 at 7:30 p.m. at Emanuel Synagogue, 160 Mohegan Dr., West Hartford, CT.

Members of the community are invited to submit names to be included in the readings, and to sign up to participate in the procession. Contact Sheri Gaudet at 860-231-6351, [email protected].

Holocaust survivor and West Hartford resident Abby Weiner along with his daughter, Gayle Temkin, will together give testimony.

Weiner, who is originally from Romania, was 14 years old when he and his family were taken to Auschwitz-Birkenau where he was separated from his mother, whom he never saw again. Weiner was eventually separated from his father and sent to the Jawiszowice subcamp, while his father was sent Buna. He would be reunited with his father briefly before his father died at Buchenwald in February 1945.

Weiner was liberated on April 11, 1945 from Buchenwald. He later moved to England and then to America, where he served in the Army during the Korean War and later entered the men’s clothing business in New York. Abby and his wife Bonnie have two children, Howard Weiner (Houston) and Gayle Temkin, and five grandchildren.

“We are humbled and honored to have Abby and Gayle share their stories,” says David Jacobs, executive director of the Mandell JCC. “There are fewer Holocaust survivors alive to serve as witnesses to the horrors of that inhuman time in our history. We have created this new format of testimony in order to engage the second and thirds generations in ensuring that the stories continue to be told.”

In addition to the Commemoration, a second reading of names provided by the United States Holocaust Memorial Museum for the Days of Remembrance, will take place all day on Monday, April 16 at the Mandell JCC in the Chase Family Gallery, 335 Bloomfield Ave., West Hartford, CT.

About the Mandell Jewish Community Center

About Voices of Hope

Voices of Hope is a nonprofit organization created by descendants of Holocaust survivors from across Connecticut. Voices of Hope’s mission is to foster a culture of courage and social action against hate, bigotry, intolerance, and indifference.