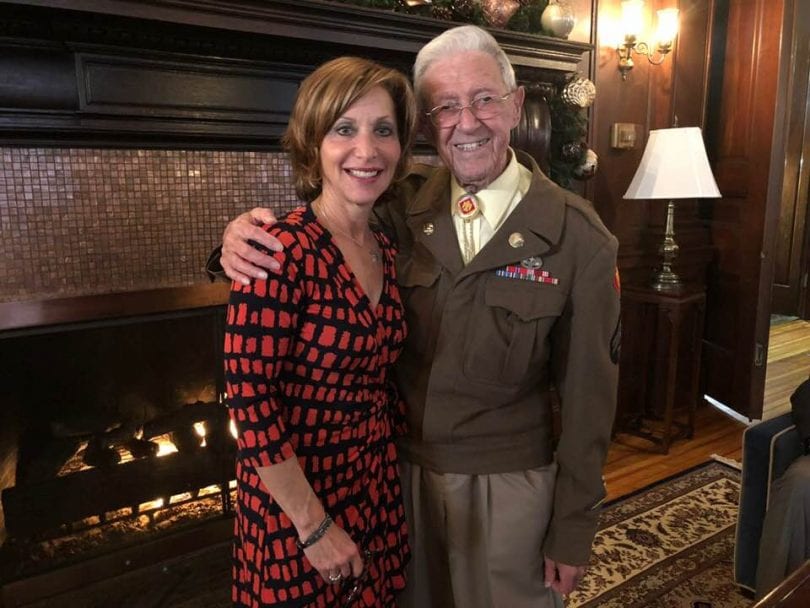 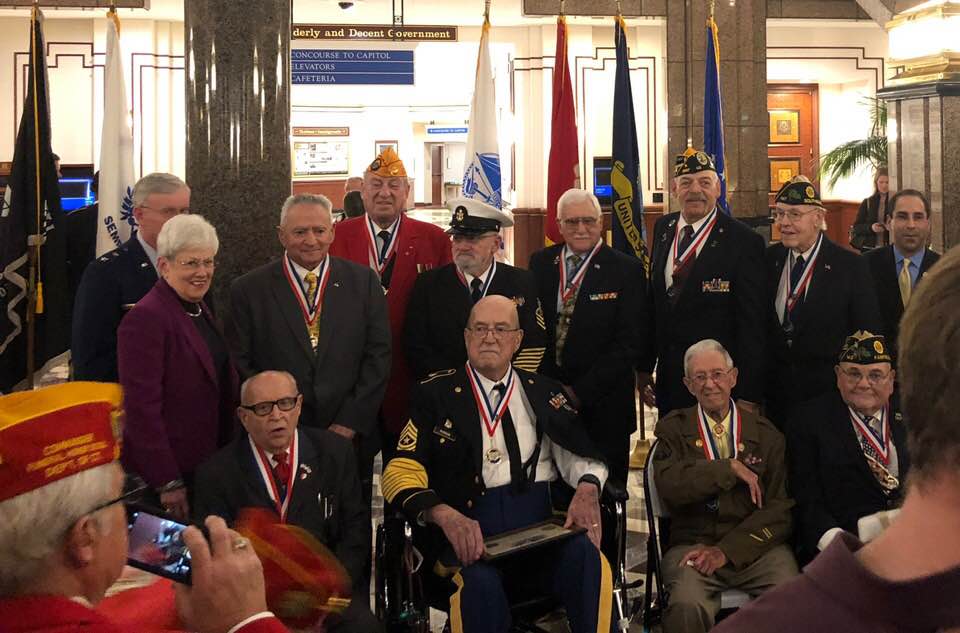 Eleven Connecticut veterans were inducted into the Connecticut Veterans Hall of Fame on Monday, among them Ben Cooper, a 95-year-old West Hartford resident who served in the U.S. Army during World War II.

According to a news release, the Veterans Hall of Fame, which was established in 2005, “recognizes the continued service of Connecticut veterans who have made significant contributions to their communities after leaving military service.” There have been 137 veterans inducted, and their names appear on a plaque in the concourse of the State Capitol complex.

Cooper’s experience with the U.S. Army was as a combat medic in the 45th Infantry Division Thunderbirds during the height of World War II, according to the news release. He was among those who, on April 29, 1945, liberated Dachau concentration camp in Germany.

During the past 30 years, Cooper has spoken to countless groups of students, civic leaders, and other veterans about the Holocaust as well as his service in WWII and the struggle to preserve freedom for all. He has also established a community discussion group, Roll Call, at the West Hartford Senior Center.

Cooper hands out his business card to those he meets, and on the back is his motto: “No act of kindness, no matter how small, is ever wasted.” The message on his card asks all to “save humanity and stop hatred and bullying” by practicing that life-saving motto. “Always remember we all belong to the same race … the human race,” it also states.

West Hartford Mayor Shari Cantor, who was invited to be Cooper’s guest at the induction, said he is one of her heroes “and an inspiration to all the lives he touches.”

“The members of the Connecticut Veterans Hall of Fame embody the true spirit of service, and we are deeply grateful to them for all they have done and continue to do for us,” Wyman said in a statement. “After the military, these men and women went on to serve in our cities and towns, giving their time, energy, and resources to help people and to strengthen our communities. Today, we honor and thank the Class of 2017 for their military service and their continued good works.”

Saadi said in a statement, “The Connecticut Veterans Hall of Fame has honored many fine men and women for their contributions and accomplishments that have enriched our state in countless ways,” noting that we are forever grateful to the newest group of patriots inducted.

“Tonight is our opportunity to recognize eleven veterans who embodied the values of military service long after hanging up the uniform for the final time,” said Martin in a statement. “Their tireless support for their communities has undoubtedly made Connecticut a better place, and I am honored to stand among them this evening.”

The following information about other members of the Class of 2017 has been provided by Lt. Gov. Nancy Wyman’s office:

Alfred Adinolfi served in the U.S. Air Force during the Korean War with the Tactical Air Command, training air control and artillery from behind enemy lines to attack enemy sites. After military service, Mr. Adinolfi spent 34 years working at DNE Technologies in Wallingford where he helped design a safer approach to rescue missions that was recognized by the U.S. Department of Defense with a commendation. He also served as the Town of Cheshire Wetlands Commissioner, Town Councilor, and as a State Representative where he was Ranking Member of the Committee on Veterans Affairs and worked to help veterans and their families.

Robert Bailey followed in his father’s footsteps when he joined the U.S. Navy. After his service, he went on to support veterans through active participation in the VFW Post 10153 where he is a Gold Legacy Life Member. Mr. Bailey established the Patriot Pen Scholarship to help veterans and their families, and he continues to help veterans navigate VA eligibility requirements and obtain services. Mr. Bailey serves as a children’s scouting and sports coach, works at his local food bank, and is a key participant in ceremonies that honor Connecticut’s military.

During the Vietnam era, Philip Cacciola, a U.S. Army veteran, was stationed in Germany as a tank platoon leader and recon platoon leader with the 3rdArmored Division. After leaving the military, he continues to serve through volunteering with the VFW, American Legion, and many other veteran-centered organizations. Mr. Cacciola sits on the Board of the Middlesex Country Chamber of Commerce and is the Chair of the Support the Troops & Honor the Veterans Committee. He assists active duty and veterans in navigating the benefits process to ensure they have the support and resources they need, and he works with local employers to bolster veteran hiring.

After leaving the military, Dominick Cortese went on to lend his expertise and advocacy to veterans in Connecticut. He serves at the Judge Advocate General for the Norwich Area Veterans Council, is a Service Officer for the Disabled American Veterans and the VFW, and is an active member of the Norwich Vet Center. Mr. Cortese assists area veterans who are homebound, ensuring they get to medical appointments. He has traveled to Bethesda Naval Hospital as part of “Operation Gift Card” to visit veterans, and he is a founder of the annual Norwich Vietnam Veterans Day Ceremony.

After serving in the U.S. Marine Corps, Lawrence Herrmann immediately went on to serve veterans as a pro bono attorney and advocate. He is active as an officer and National General Counsel of the Marine Corps League and serves on the Board of the Chapel of Four Chaplains, a Pennsylvania-based non-profit organization that recognizes exemplary service in the community. Mr. Herrmann was also a volunteer mentor in Veterans Court, part of Queens Supreme Court, and worked to bring the model here to Connecticut. He is known nationally for successfully advocating  for veterans, especially those with post-traumatic stress.

After spending 30 years in the Connecticut Army National Guard, Chester Morgan now serves his community in a variety of roles. As a former state representative, Mr. Morgan spearheaded the effort to ensure that National Guardsmen/women would qualify for free tuition at Connecticut colleges and universities. Mr. Morgan also founded the Vernon Memorial Day parade and served as its chairman, he was the Military Volunteer Coordinator for the Rockville Elks, and was part of an effort to raise $30,000 to have Armed Forces flags installed in locations throughout Vernon.

Thomas Pandolfi, a Vietnam-era veteran, is an active member of the Employer Support of the Guard and Reserve group, the American Legion, the Soldier, Sailors & Marines Fund, the Connecticut Veterans Military Coalition, and many others. He is a staunch advocate for the needy, veterans, and senior citizens and volunteers wherever he is needed. Mr. Pandolfi distributes clothing, ensures that veterans and seniors have medical devices, heat, and that they can pay their rent. He is known as a man of action and is called upon in his community for his insight and love of his fellow soldiers.

After leaving the U.S. Army, Tom Quinn turned his attention to advocating for veterans in his community. He served as Post Commander and Vice Commander for American Legion Post 143 and marshalled the Town of Fairfield Memorial Day parade, he coordinates fundraisers to support veterans, leads town memorial services and celebrations, and regularly serves on the funeral Honor Guard. Mr. Quinn is known as a strong advocate and a voice for veterans, fighting for funding and supports to meet the needs of our veterans. He also leads Veterans Day school assemblies and focuses on reminding students of the sacrifice made by our veterans.

William Sullivan served in Vietnam as the Field Artillery Unit Commander of the 33rd FA. After Vietnam, Justice Sullivan returned to Waterbury to practice law. He was appointed to the Connecticut Superior Court, the Appellate Court, and in 1999, he was appointed to the Connecticut Supreme Court. Throughout his service to the state and its people, Justice Sullivan also volunteered for many service organizations and boards and commissions. The Waterbury Veterans Memorial Committee recognized him for his military service, and he received the Patriotism Award from the Waterbury Sportsmen Club.

John Turk served in the U.S. Army and then went on to become a four-term Commander of the American Legion Post 147 in Southbury and a life member and supporter of the VFW.  Mr. Turk also participated on a ceremonial honor guard and helped establish the Veterans Wall of Honor. He has served in each municipality in which he’s lived, holding positions on the City Council in Danbury, on the Board of Selectman in Southbury, and on the Charter Revision Commission in both. Mr. Turk is an active member of the National Association of Accountants and is currently the assistant treasurer of the Southbury Interfaith Thanksgiving Meal. 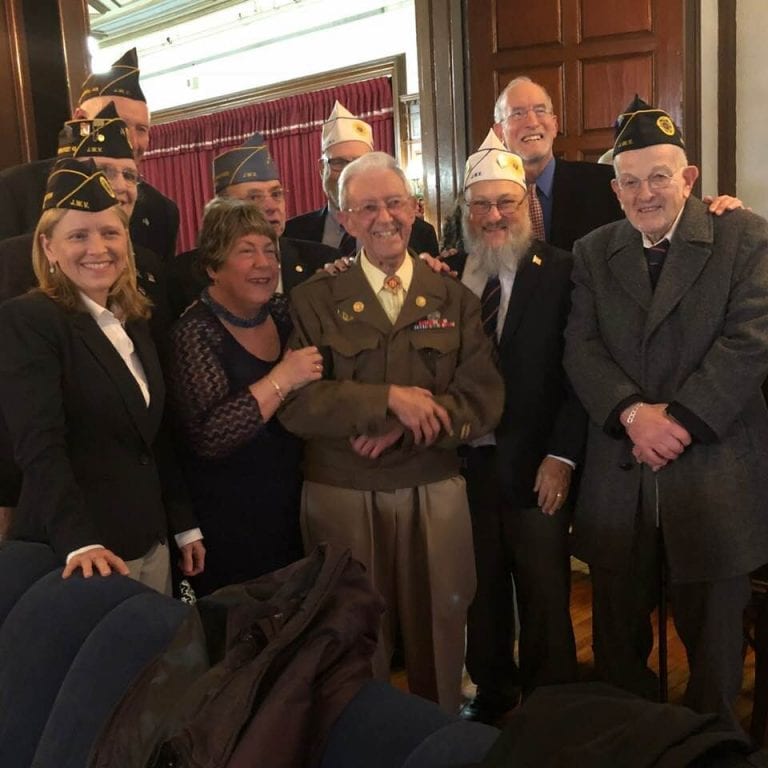 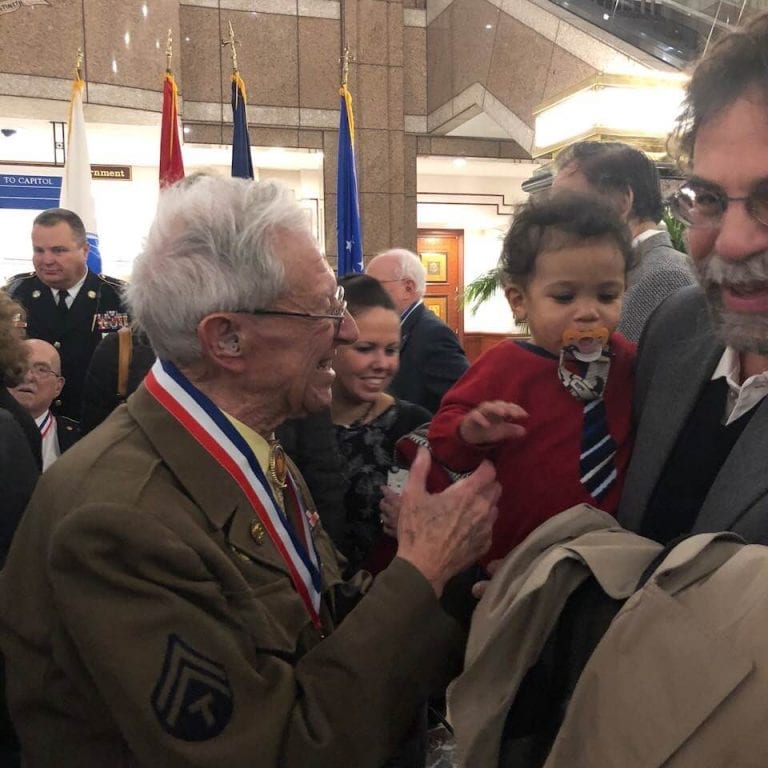