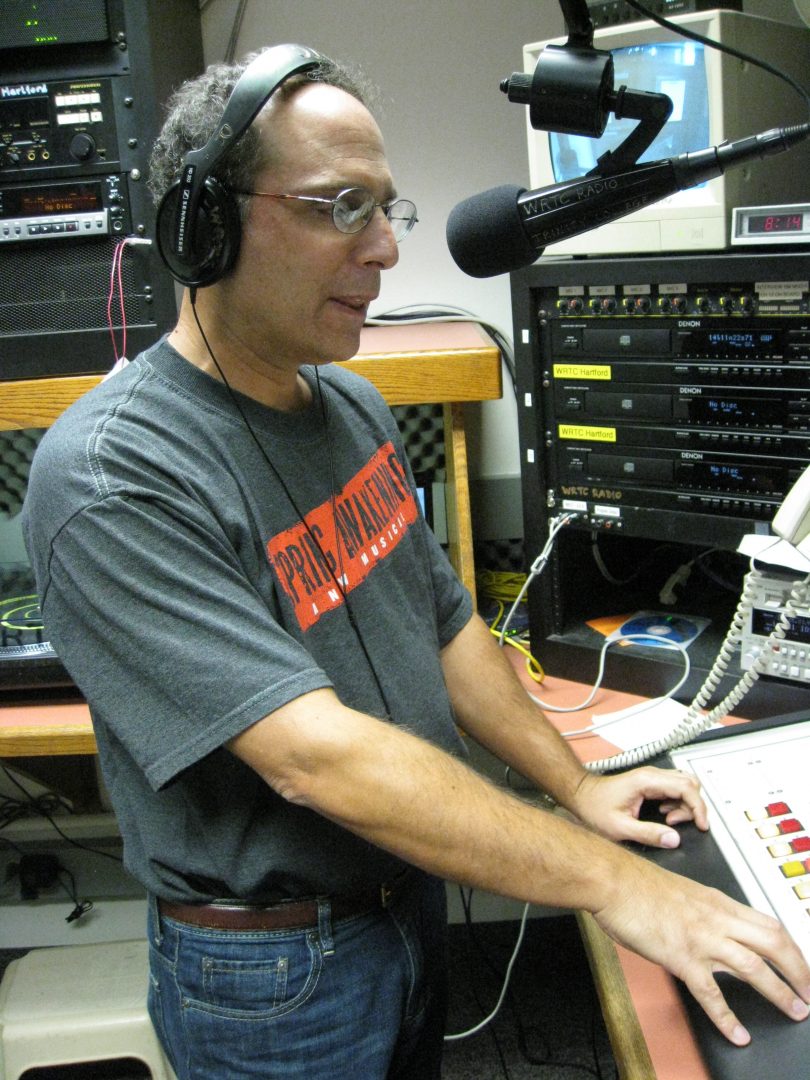 West Hartford resident Stuart Brown, a UConn administrator who is also a longtime DJ, launched the online station – which can be heard by people all over the world – in March.

“I began in college radio in the late 1970s as a student at Rutgers University,” said the UConn administrator, who is director of Student Services at the University’s Waterbury Campus. “By the time I graduated I was DJing six hours a week with two three-hour programs. One was a New Wave show and the other was Broadway show tunes.”

His experience as an undergraduate member of WRSU-FM planted the seeds for what has recently become the culmination of his long-held goal. This past March, Brown debuted a 24/7 online Broadway music radio station, Sounds of Broadway (www.SoundsofBroadway.com).

“I’ve been a huge musical theater fan since seeing the original production of ‘Grease’ on Broadway in 1972,” he said.  “In college, not only did I have my own Broadway program, but I was also the Fine Arts editor of the station, which allowed me to get press seats for Broadway plays and musicals. Rutgers was only a 45-minute train ride into New York City so I was able to see a lot of shows.

“Starting my own radio station combined my two loves – Broadway music and radio,” stated Brown, who is also president of the Connecticut Critics Circle, a statewide group of theater reviewers. “For the past 25 years, I’ve had a weekly radio program at Trinity College’s WRTC-FM, which allowed me to keep DJing. With recent advances in technology, starting my own radio station actually became a goal I could attain. I can program and run the station from my home by simply using a microphone and laptop.”

According to Brown, Sounds of Broadway offers the most wide-ranging listing of music from the Off-Broadway, Broadway, and London stages. Thousands of songs from hundreds of cast recordings are in rotation, with dozens of new shows being added weekly.

“My last count was something like 4,000 songs from about 500 musicals,” he said. “I feature popular and well-known shows like ‘Wicked,’ ‘My Fair Lady,’ and ‘Hamilton,’” he said. “But, unlike other online radio stations, I’ve included selections from more obscure or little heard of shows. I guess it’s the college educator in me. I want the station to entertain, but I also want to teach people about musical theater history.”

One of the central features of Sounds of Broadway is a two-hour all-request time slot from 6-8 p.m. every night. “Everyone has their favorite songs they want to hear and this will give listeners the opportunity to do so,” said Brown.

Other specialty programming includes such thematic slots as “The Best of Forbidden Broadway,” “Lost in Boston” (songs cut from a Broadway show’s out-of-town tryouts),” and “Nothing But Overtures.” There will also be programming corresponding with holidays, such as Halloween and Christmas; performer’s birthdays; and special times of the year, such as the start of school in the fall.

“I’m really excited about the upcoming Tony Awards,” Brown said. “During the weekend before the June 9th ceremony I’ll have three playlists in rotation featuring every past winner in the Best Actress, Best Actor and Best Musical categories. It will probably be about 12 hours of music. I’ll start from the very beginning, in 1948, and work my way up to last year’s winners. I’ll also be including Tony trivia and fun facts.”

Being an online radio station allows people to tune in from all over the world. “In just a few short weeks of launching I’ve had thousands of listeners from Australia, New Zealand, England, Germany, Canada, and, of course, all over the U.S.,” stated Brown, who has been at the Waterbury Campus since December 1989. “I’m looking for those numbers to increase once I develop a phone app. We just got onto Amazon’s Echo device.”

Over his 40-plus years in radio, Brown has seen many changes. “In college everything was vinyl, unlike today,” he said.  “We even had some albums on reel-to-reel tape. I remember that’s how the station received an advance copy of the debut album by The Cars. Then everything went to CDs and now it’s all digital. At the Trinity College station, students come in for their shift, plug in their computers, and hit play. That’s it. It’s kind of sad. There’s no spontaneity anymore. Today’s undergraduates don’t even know the term LP and are mystified on how to cue one up.”