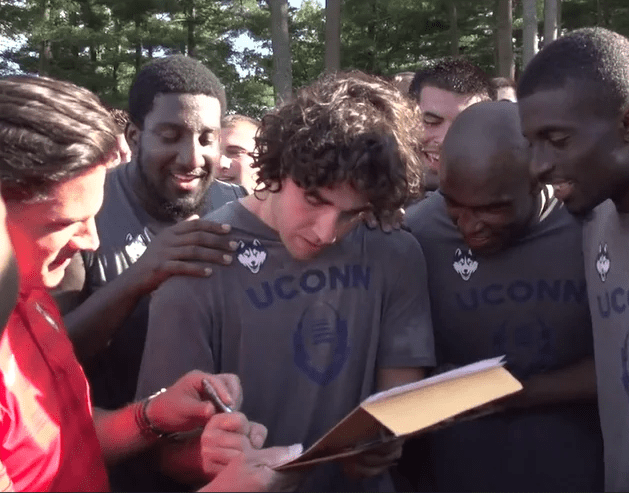 Conard graduate Jeremy Claflin has earned a scholarship for his final year of eligibility.

Jeremy Claflin, who graduated from West Hartford’s Conard High School in 2011, has been a member of the UConn football team ever since his freshman year, but after four years as a preferred walk-on, Claflin has been awarded a scholarship for his fifth and final year of eligibility as a Husky.

“I’ve been working toward it, but I didn’t know it would happen. And then I had no idea it would happen with [Head Coach Bob Diaco] announcing it in front of the whole team,” Claflin said about the day he was surprised with an offer.

Claflin said that the coach had been walking around with a clipboard during a summer workout, and before the team headed out for a barbecue, he said he had some “housekeeping” to do.

“He said, ‘In this envelope is scholarship paperwork, and Claflin has to sign it!’ Then the whole team mugged me and pushed me to the front,” Claflin said.

When Claflin got home to West Hartford late that night he told his parents. “They were ecstatic. My dad couldn’t sleep that night. It was 10:30 but he wanted to call everyone right away!”

Claflin, who played safety and quarterback at Conard, said that when he decided to go to UConn, football wasn’t even part of the equation. He originally wanted to go to the U.S. Naval Academy, but wasn’t accepted. “It was all about academics, that was all I thought about,” Claflin said. He was thrilled to be accepted at UConn.

One day Rob Cersosimo, Conard’s head football coach at the time, stopped Claflin in the hallway and asked if he wanted to play football at UConn. Claflin was definitely interested, and after reviewing his films, Paul Pasqualoni invited him to be a preferred walk-on.

“At first I just wanted to get on the field, and I was lucky enough to do that two years ago under Coach Weist and then this past year with Coach Diaco,” Claflin said. That was good enough, but getting money – that was the icing.”

There have been other walk-ons at UConn, and they usually come and go, Claflin said. Not many have stuck around, although a few others, like punter Justin Wain, have been awarded scholarships.

“Mostly it’s just about being acknowledged, proof that I’ve been valued,” Claflin said.

Claflin, who is now a graduate student in accounting, is hopeful that he will remain healthy and contribute to the team this season, his fifth and last. “I’ll be on special teams. I know my place on the team and I’m happy with the playing time I’ve been getting,” he said.

“I’m really happy to be part of the team, and excited about the season. I love this coaching staff. We have a winning mentality going into everything we do,” Claflin said.