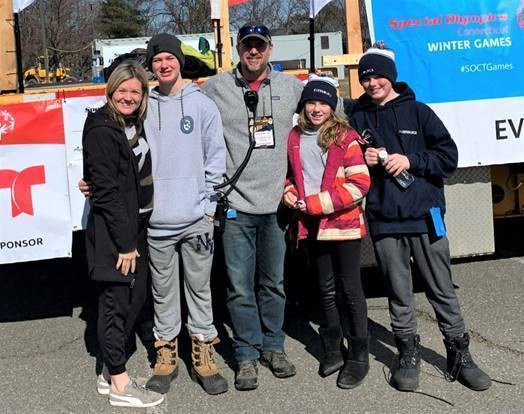 West Hartford resident and Eversource employee Chris Keever got involved with Special Olympics Connecticut Winter Games as a volunteer through his employer, which is the presenter of the event, and has now taken on the role of ‘Director of Competition.’

When Eversource volunteers welcome Special Olympics Connecticut Winter Games athletes to the company’s Windsor campus for cross country skiing and snowshoeing competition this weekend, West Hartford resident Chris Keever, who by day is a supervisor in Distribution Outage Coordination, will be overseeing the event as director of competition.

Keever has been volunteering with SOCT for 20 years, and the organization honored him as an “Unsung Hero” several years ago for his efforts to make cross country skiing a successful element of the Winter Games competition.

The Winter Games were canceled in 2021 due to the COVID-19 pandemic, but are returning this year, and Keever, whose whole family gets involved, are happy to be back.

“It’s a big family thing,” Keever said. “My wife and kids have come every year to opening ceremonies since I started volunteering and when the boys each turned 10, they became course helpers and continue to do so. They’re hooked,” he said.

“This year we’re still navigating the pandemic and while the Games will be only one day instead of the usual weekend, I had no hesitancy taking the director’s role because of our other ‘family,’ the team of volunteers, many who also come back year after year,” Keever said.

According to Eversource, the company’s volunteer snowmakers – ” the only team that makes snow exclusively for a Special Olympics state Winter Games event” – have already been hard at work running the snow guns and preparing the course for Saturday’s event. While warm temperatures early in the week would pose a challenge to making snow, Thursday is forecast to have a high in the 30s, and Friday may bring plenty of natural snow to the course courtesy of Mother Nature.

Keever is prepared to do what’s needed to ensure the Games take place and are a success.

“Ten years ago, I said it’s the smiles on the athletes faces that brings me back year after year and that’s the same today,” said Keever. “The spirit of the Games is to be open to anyone with a mental or physical handicap and we have athletes of all ability levels. We’ve integrated technology to help us officiate and report results better, and we’re committed to giving these athletes the best experience we can.”

The Opening Ceremonies will be held at 11 a.m., with competition set to begin at 11:30 a.m. on Saturday, Feb. 26. There are 75 athletes expected to compete in cross country skiing as well as snowshoeing in the SOCT Winter Games at Eversource’s Windsor facility, 1985 Blue Hills Avenue Extension (Route 187).