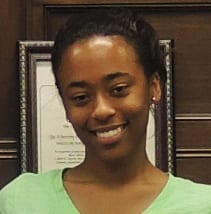 Kamille Bernard, West Hartford resident and a sophomore at Miss Porter’s School, turned her summer vacation into a life-changing experience.

What does your teenager choose to do in his/her spare time? Does s/he like to sit on the couch inhaling bags of junk food, in a video game-induced trance? Picture this scenario playing out day after day for months on end. Sound like a horror story? This could be your summer vacation nightmare if you don’t act now.

According to Kamille Bernard, a West Hartford resident and sophomore at Miss Porter’s School in Farmington, “When I think about how I could’ve missed out on the Summer Nexus experience, I feel foolish for originally not wanting to go, and lucky that I did. I would’ve just stayed at home, hung out with friends, and watched TV for a week, but instead I did something meaningful and helped a worthy cause.”

Bernard was accepted into Leadership Greater Hartford’s Summer Nexus program, a week-long youth leadership program for urban and suburban students, grades 10 to 12, that fosters connections and community involvement through interactive workshops and service learning activities. Last summer’s program brought together 30 students from 13 different towns and 21 different schools in the region.

Bernard shares, “Summer Nexus was a fantastic program that changed my life through the experiences I had and the people I met. Our service project of rebuilding Jonathan’s Dream really hit home for me. When I saw that I could help make Jonathan’s Dream a part of kids’ lives again, just like it was a part of mine, I was determined to do a good job.”

As part of the program, students select a community service project they are passionate about. Bernard’s group organized a fundraiser to help rebuild Jonathan’s Dream, the country’s first boundless playground located at the Mandell Jewish Community Center. The original Jonathan’s Dream was torn down in 2013 due to safety concerns. During their week-long session, students solicited donations and hosted a car wash and bake sale. They also created a fundraising guide for future students who wish to raise funds to help support this initiative. Through their efforts, students raised over $1,400 for Jonathan’s Dream.

In addition, students participate in various leadership workshops, activities, and have the opportunity to meet prominent community leaders. “While we were shy at first, we eventually broke out of our shells and asked questions,” explains Bernard. “We really got to know these people who do so much for our community and represent a real-world example of what we are trying to do through Summer Nexus.”