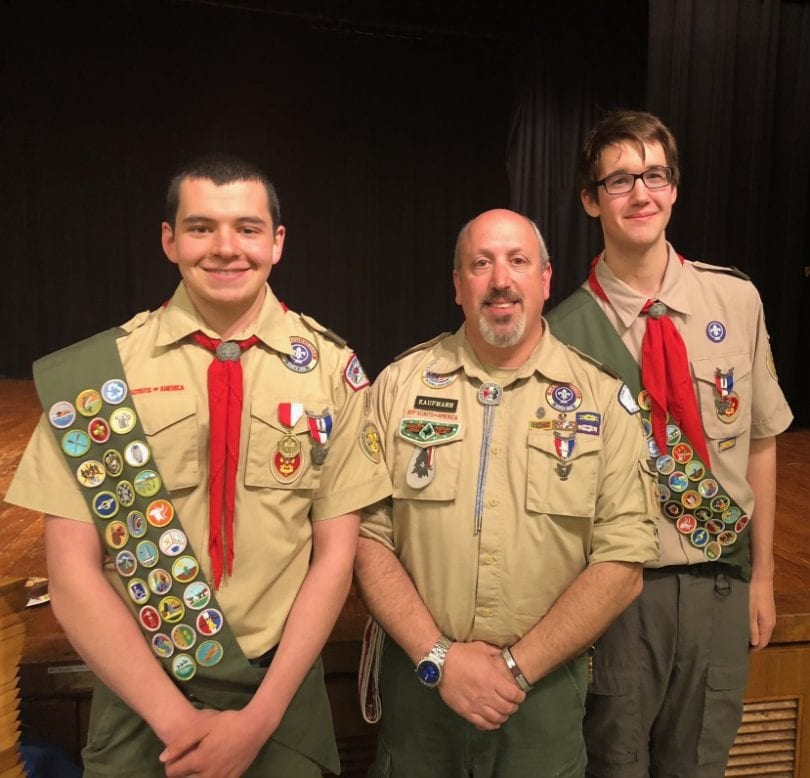 Two members of Boy Scout Troop 44 were recently recognized for achieving the rank of Eagle Scout.

Adam Smith, son of Terrence and Celeste Smith, and Nicholas Levere, son of Alan and Linda Levere, both of West Hartford and members of Boy Scout Troop 44, are the newest West Hartford boy scouts to earn the rank of Eagle.

Their Court of Honor was held on Wednesday, April 25, at the Universalist Church of West Hartford.

To earn the rank of Eagle, a scout must earn at least 21 merit badges across different disciplines and demonstrate leadership and community service by organizing, managing, and carrying out an Eagle project.

For Adam’s Eagle project, he led a group of scouts in building feral cat shelters for Our Companions Animal Rescue.

For Nick’s Eagle project, he led a group of scouts in the renovation and restoration of two of the historic West Hartford building replicas included in the Town’s portable nine-hole miniature golf course.

Nick recently completed his freshman year at Central Connecticut State University in the Mechanical Engineering program. He is a 2017 High Honors graduate of Conard High School. In addition to being named 2012 Scout of the Year for Troop 44, Nick has received awards for Sportsmanship and Co-MVP from the Town of West Hartford’s Youth Baseball League. He was a co-captain of the Conard swim team, and earned varsity letters and All-Academic awards for Conard’s swim, cross country, and outdoor track teams. Nick was also a four-year member of Conard’s band and a National Spanish Honor Society recipient.