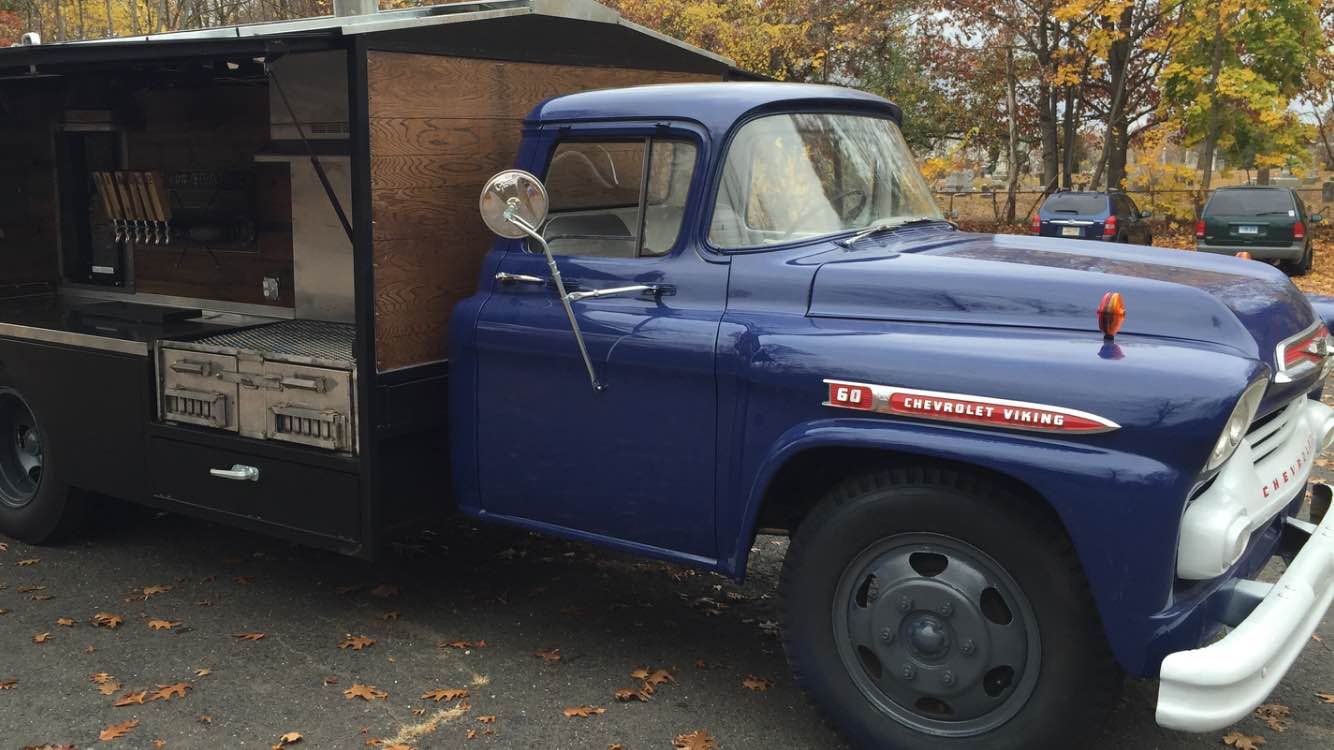 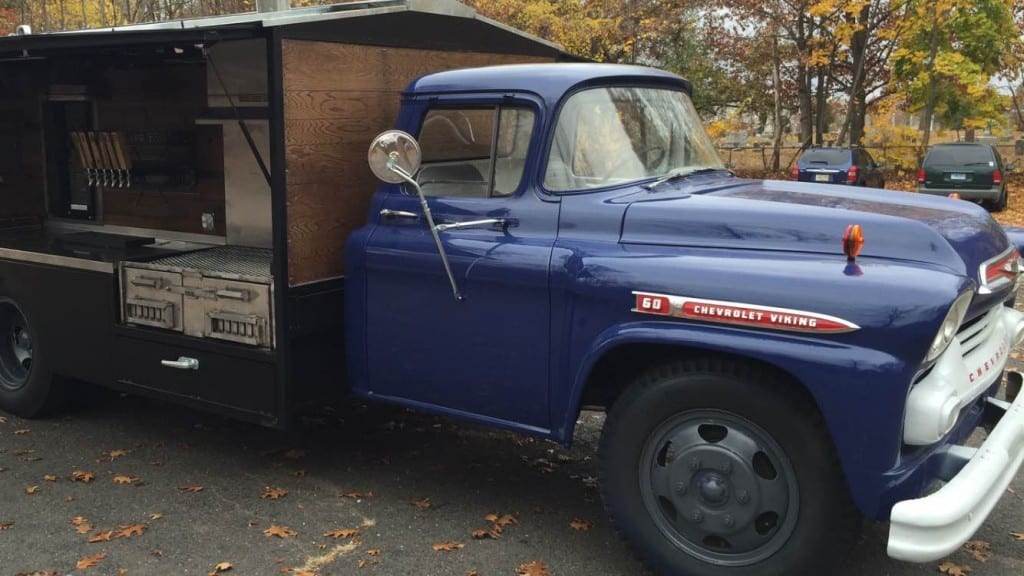 Iron & Grain Company’s mobile catering vehicle may date to the 1950s, but it is definitely not your father’s food truck.

Tate Norden’s refurbished 1959 Chevy Viking – a former farm truck that has been reincarnated and now boasts a built-in wood-fired grill, six beer taps, a wine fridge, sinks, and storage – bears no resemblance to a “roach coach.” That was the moniker used for the food trucks of past decades that would pull up at work sites during lunch hour, serving lousy coffee and prepackaged, processed foods. 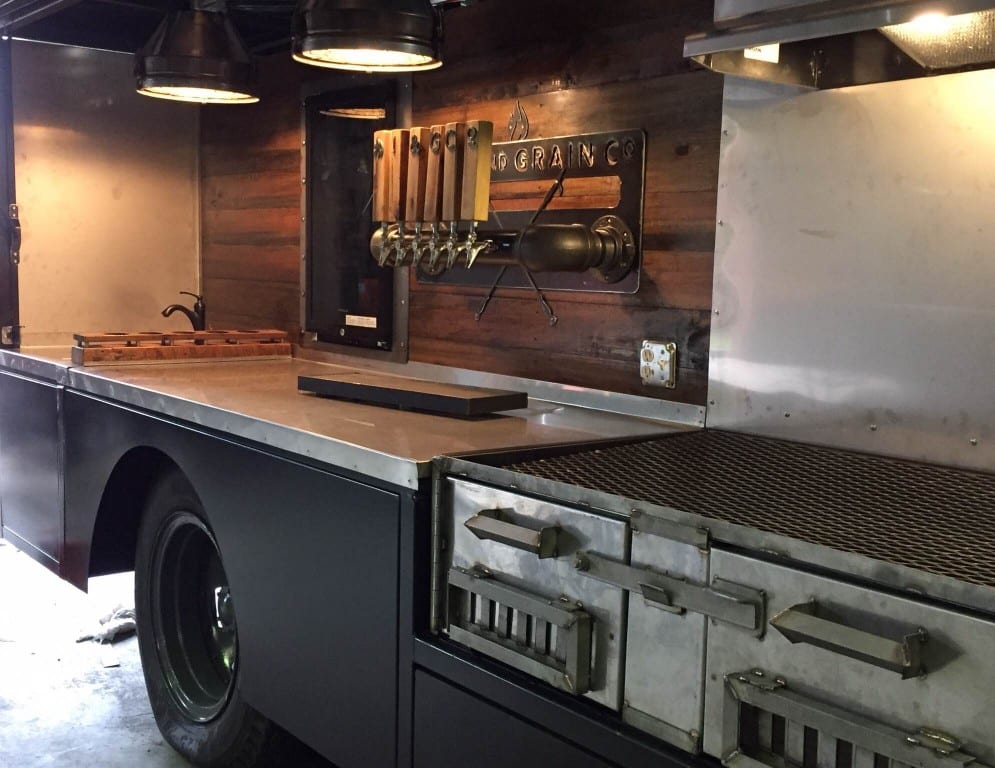 Mobile eateries have become incredibly popular in the past decade, and food trucks have become one of the fastest growing trends in the food industry.

A food truck is considered “cool” these days, and Norden and his Chevy Viking take the concept to a higher level of cool by serving fresh and locally-sourced food cooked over a wood-fired grill. They even serve local craft beer (Hooker, Black Hog, Stony Creek) – another incredibly popular trend – when the truck is used for private events. Private events can also feature wine as well as craft cocktails.

“I’ve always had a passion for cooking, especially grilling,” said Norden. He said that when he worked in the kitchen at summer camp he fell in love with open flame cooking.

Norden’s partner, his cousin Adam Belward, is a former military dog handler who used his GI Bill benefit to attend the Culinary Institute of America in Hyde Park, NY. Norden’s wife is also involved in the business. They have spent nearly four years planning, researching, and saving money to launch this business. 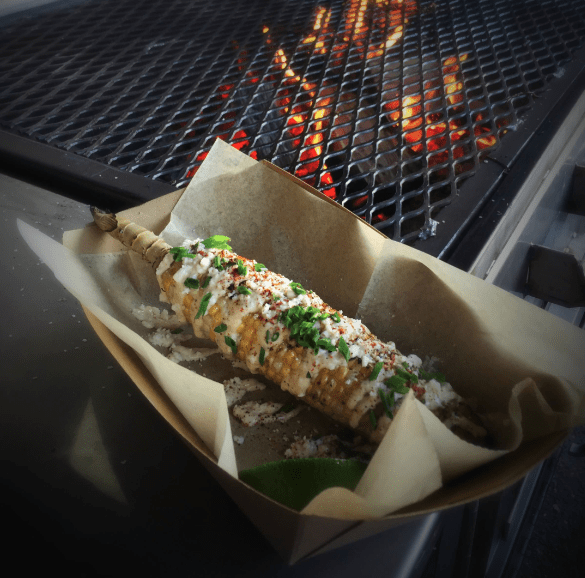 Iron & Grain doesn’t want to be pigeon-holed as a niche food truck with a limited menu. “We want to be known for serving locally-sourced food cooked on a wood-fired grill,” Norden said.

Their beef is 100 percent grass-fed, from Karabin Farms in Southington. As much as possible of the produce is locally-grown. Their bread is from Hartford Baking Company. Norden said a major part of Iron & Grain’s mission is to grow their own business while also helping the local economy.

The menu includes sliders and a variety of flatbreads. Norden said one of the most popular items is the “black and blue sliders”: a 2-1/2-oz. beef slider with bacon crumbles and blue cheese mixed in, hand-formed, served with bibb lettuce and topped with caramelized onions and more blue cheese, served on a brioche from Hartford Baking Company.

Iron & Grain grills other seasonal veggies as well, and they also grill wings. The key element is that everything is prepared on the wood-fired grill, Norden said. 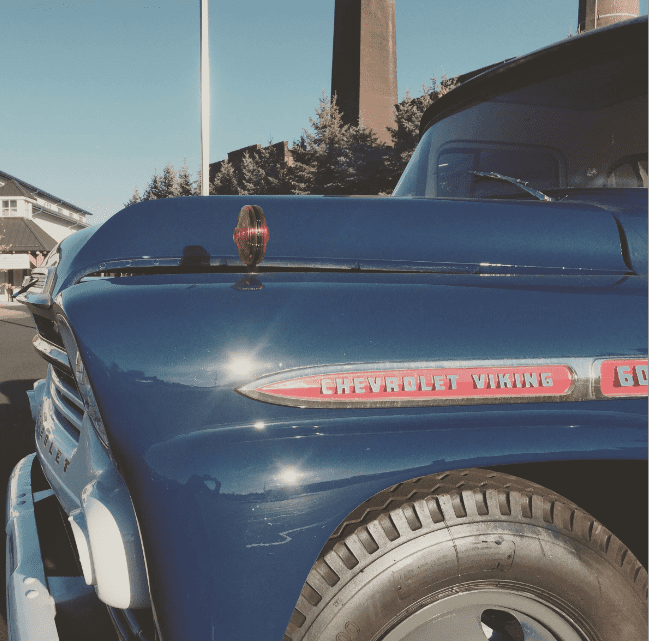 The ‘Viking’ logo was one of the reasons Norden chose this particular truck. Courtesy photo

The truck itself a major part of Iron & Grain’s appeal. It had belonged to a family who used it on a farm in Alabama, and Norden found it online. “I was looking for something that needed love and restoration, and liked the look of an old-school Chevy,” he said. When he zoomed in on the truck’s decal and saw that it said “Viking,” that sealed the deal.

Norden’s father, who died in 2008, was Swedish, and he felt that the truck was a nod to his heritage. “It’s not built for speed but it’s a really cool truck,” Norden said.

The “iron” and “grain” in the business’ name were chosen to represent a culinary fusion, and the truck itself has a “Restoration Hardware” appearance. “It’s a melding of forces to create an experience for the customer,” Norden said.

There was a soft launch of Iron & Grain last fall at several private events, and Norden said that the feedback on the look of the truck, and the food, has been very positive. He said they can easily handle a crowd of 125-150 people.

For now Norden is keeping his “day job” as a marketing professional, as is his wife who teaches fourth grade at West Hartford’s Bugbee Elementary School. Eventually, they hope to expand the business with multiple trucks. “Because of the weather this business is a seasonal model. To maximize it we need to do double booking, so we will certainly grow into having multiple trucks,” Norden said.

The schedule for 2016 is already looking busy, with plans to appear regularly at the monthly FARE farmers’ market in Willimantic, at the Cromwell Farmers’ Market, and at local breweries. They have private events such as graduation parties, fundraisers, rehearsal dinners and weddings, and other events scheduled for 2016 and into 2017.

Norden said that one of the fundraisers that Iron & Grain has participated in was a benefit for the West Hartford Dog Park Coalition. Because he loves dogs, and his partner is a former military dog handler, the business’ eventual philanthropic focus will definitely include dogs and veterans, he said.

Although you won’t usually find it parked along the side of the road in West Hartford Center, Iron & Grain will also have a chance to very publicly showcase the Viking in the Center this June – as one of the new food vendors at Celebrate West Hartford.

Iron & Grain’s logo is a fusion of metal and wood. Courtesy photo 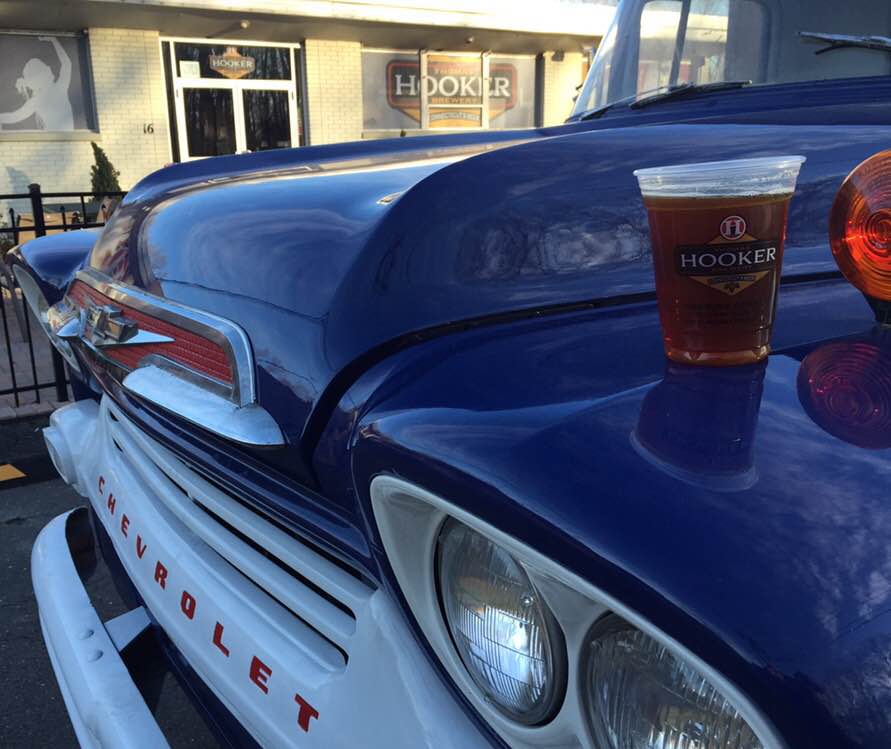