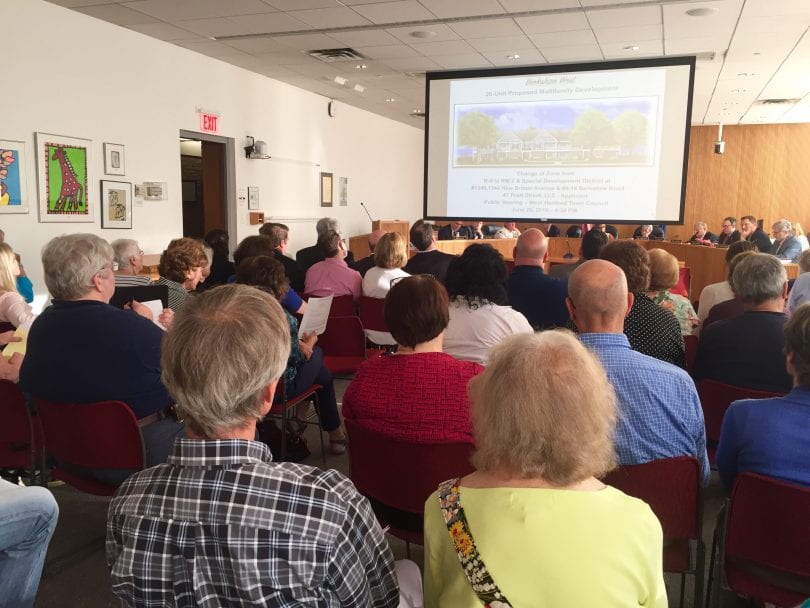 The West Hartford Town Council will continue the public hearing until September on a proposal to change zoning and establish a Special Development District at the intersection of New Britain Avenue and Berkshire Road. 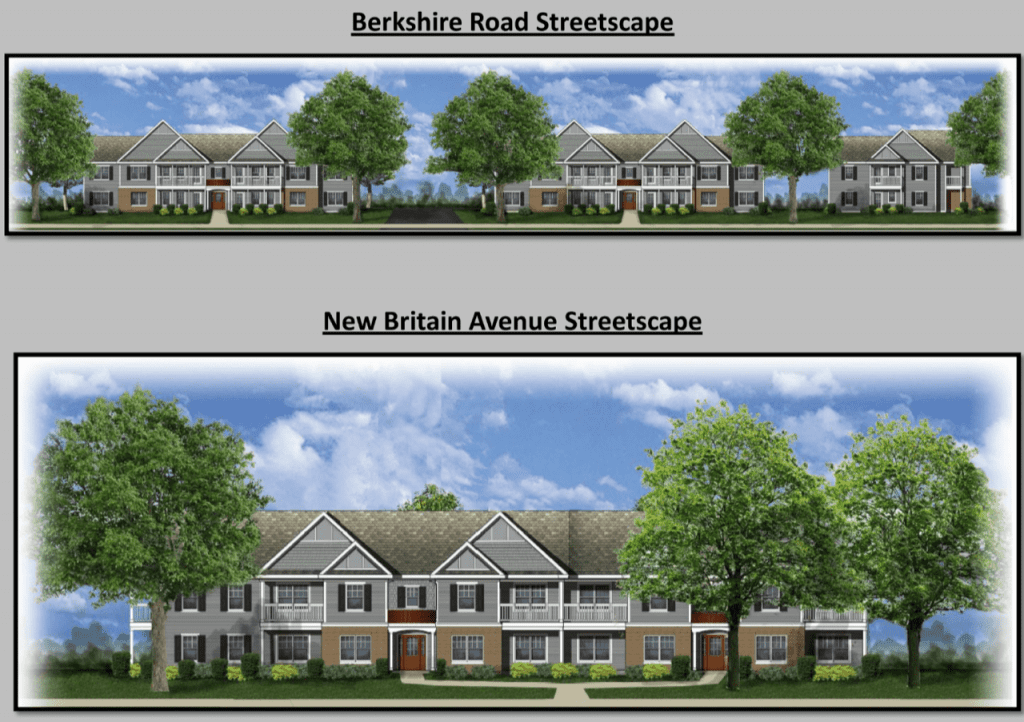 By Ronni Newton and Maddie Geerlof

After hearing testimony from more than 20 residents Tuesday night, the West Hartford Town Council closed public comment but will continue the public hearing on a request by 47 Pratt Street, LLC to change zoning from single- to multi-family and designate a parcel at the intersection of New Britain Avenue and Berkshire as a Special Development District in order to construct a 26-unit multi-family residential development to be known as Berkshire West.

A capacity crowd estimated at 80-90 people filled Council chambers Tuesday night, many of whom took the opportunity to voice their strong opinions about the proposed development, and others who came to support their neighbors.

The hearing began just after 6:30 p.m., and included a detailed outline of the application by attorney Robin Pearson of Alter Pearson, LLC, an outreach report from Chuck Coursey of Coursey & Co., and presentations by the architect, site engineer, traffic engineer, and developer and property owner Joe Calafiore. At 10:45 p.m., after a brief caucus, Mayor Shari Cantor decided to continue the hearing and thereby postpone the vote on the project.

Although all members of the public had been given an opportunity to comment, many Council members still had questions to ask of the applicant, and there was also some question about whether or not the number of qualified signatures on a petition against the project – required to be 20 percent of those who live within 500 feet of the site – was sufficient to trigger a requirement that the project have supermajority support in order to be approved.

The hearing will recommence at 7 p.m. on Wednesday, Sept. 12. Although the public comment section of the hearing has been closed, petition signatures can still be submitted and Council members will be able to ask questions. The September date was chosen because several members of the Council will be absent for the July and August meetings.

In order for the proposal by 47 Pratt Street, LLC to move forward, the Town Council would have to approve a change in zoning from R-6 (single family) to RM-2 (multifamily). In addition, the 1.7 acres of property, comprised of seven parcels located at 1340 and 1344 New Britain Ave. and 8-16 Berkshire Rd., would need to become a Special Development District.

Jim Cassidy, site engineer with Hallisey, Pearson, and Cassidy, said that Berkshire West would maintain the residential appearance of the neighborhood along the roadway, and locate the 51 parking spaces for the development behind the three buildings. The existing curb cut would be relocated, with the driveway positioned directly opposite the driveway to the West Hartford United Methodist Church, and have “excellent sight lines in both directions.”

The floor area ratio for the proposed development would be lower than permitted in an RM-2 zone, and the development would be nearly identical to or less intense in terms of building size and impervious coverage than an R-6 subdivsion scheme that had been previously approved.

Most of those who spoke out in opposition, however, live in the nearby neighborhood, including a large number of residents who live on Shadow Lane which abuts the eastern edge of the proposed development.

Although there were an array of opinions on the matter, many members of the public strongly opposed the proposal to rezone the single-family lots and construct three buildings with a total of 26 units.

Addressing the crowd, Shadow Lane resident Suzi D’Annolfo said, “Look at our audience. This is our neighborhood. We’re not a bunch of young chicks … We have been around because we love our neighborhood.” D’Annolfo and her husband, Frank, have lived in their neighborhood for decades, and she asked the Council to look at things through the eyes of area residents.

D’Annolfo said many people are drawn to West Hartford because it is safe, family-oriented, secure, and private, but she does not think that this project will be a positive addition. “With all due respect to our presenters, you provided no benefits to our neighborhood because this development is of no benefit to our neighborhood.”

The crowd gave D’Annolfo a rousing round of applause when she finished speaking, as they did for many of the others who addressed the Council.

Ed Reilly of Shadow Lane said that his opposition was not a “NIMBY” [not in my backyard] issue because there are already many multifamily residences in the neighborhood. “This is about altering our quality of life so a developer can make a profit,” he said.

Glen Baldi’s home on Berkshire Road directly abuts the north side of the proposed development. When he purchased it last August, he said he was told that six or seven $400,000 homes would be built next to his house, based on a previously approved single-family subdivision approved for the site, and that was a huge influence on his decision to purchase the home he did. When he was informed that instead there was a proposal that instead was for 26 apartments “I was devastated,” he said.

Baldi said he has concern with traffic on Berkshire, which many already use to cut through to Westfarms, and that the proposed 11,000 square foot buildings “are going to look very out of place from the single-family homes that already exist,” most of which are ranches.

“Please consider our neighborhood and how it’s going to impact us,” said Genie Heyer Shadow Lane, who emphasized the importance of the inclusivity and security of the surrounding neighborhood.

Other West Hartford residents shared similar concerns. For example, Ted Mancini of Ridgewood Road, in a passionate address to the council said, “You’re dropping a multi-family unit right smack in the middle of a single-family neighborhood.”

“Joe [Calafiore, the developer] is a businessman. He’s trying to make money. He was not elected to protect your interests,” Mancini said, stating that he believed “the decision [to approve] is already baked in.”

Mancini said an apartment complex would negatively impact the already established culture of a single-family-home neighborhood. He also brought attention to a petition that accumulated 185 signatures of nearby residents who are in opposition of the complex.

In a heartfelt plea, Ronald Taylor, whose mother owns the property adjacent to the parcel, asked members of the council and the audience, “Would you want this next to your house?” Taylor explained that the property that extends immediately past his mother’s backyard, if the development was to be approved, would be converted into a parking lot for the complex.

The traffic assessment that was presented by Kevin Solli of Solli Engineering looked at the impact the 26  units would have at peak times of day, weekday mornings from 7-9 a.m. and weekday afternoons from 4-6 p.m. Based on rates that are established by the Department of Transportation, he said that the impact would be minimal – 12 trips in the morning (three cars entering and nine leaving), and 15 trips in the afternoon (10 entering and five leaving). “What happens is for these types of developments just because there are 26 units doesn’t mean every resident is going to leave at the same time,” Solli said, adding that he is very confident that trip generation information is conservative and consistent.

Many residents, however, brought attention to traffic-related issues that already exist and how they could potentially be worsened with the addition of a 26-unit complex that would increase the volume of vehicles on the intersection of Berkshire Road and New Britain Avenue. “This is one of the worst intersections you could possibly plop [the complex] on,” said Beechwood Road resident Brian Clarke.

Of the 21 who spoke, Marc Camardo of Wolcott Road, who said he is an eight-year resident of the town, was the only one who voiced support for the project. “I really appreciate the value of West Hartford, the way West Hartford values all people of all walks of life.”

Camardo said that for millennials like himself, communities like Berhskire West, with amenities within walking distance, are critical to future success.

Calafiore said that West Hartford has become a destination, an attractive place for people – including young people and those who are retired. The town has encouraged mixed use development and patterns of growth to accommodate the type of residential options that people are seeking. Making a comparison to Blue Back Square, he said, “I believe that Berkshire West is similarly situated to contribute to the growth and vibrancy of West Hartford.”

The application states that the proposed zoning change is in harmony with West Hartford’s Plan of Conservation and Development, and “in harmony with the neighborhood development” that includes nearby Chatfield Drive and Brookfield multifamily residences.

The project has already been unanimously approved by both the Town Planning & Zoning Commission (TPZ) and the Design Review Advisory Committee (DRAC). There is currently a wetland permit in place, which was obtained for the previously-proposed project that was never built.