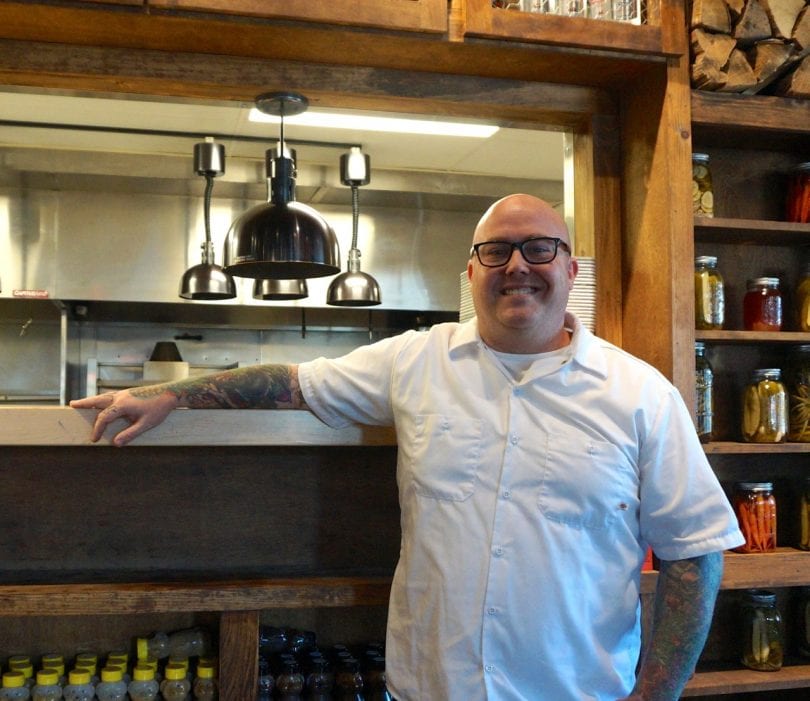 Tyler Anderson, owner of Millwright’s in Simsbury and co-owner of West Hartford’s Cook and the Bear, faces off with 14 other chefs for the title of ‘Top Chef’ on Bravo Media’s culinary challenge show.

Tyler Anderson already has an amazing resume of culinary achievements and has certainly achieved celebrity status in central Connecticut, where he is well known and highly respected as the chef/owner of Millwright’s Restaurant and Tavern in Simsbury and as partner with Jamie McDonald and A.J. Aurrichio in West Hartford’s Cook and the Bear, but after his appearance as one of 15 contestants vying for the title of ‘Top Chef’ on Bravo, he’s be a household name nationwide.

Anderson, who lives in Simsbury and splits his time between Millwright’s and Cook and the Bear, will be the first Connecticut chef to appear as a contestant on what he said is “by far the best cooking show on TV.”

In an interview Wednesday in West Hartford, Anderson spoke about the rewards as well as the challenges of being a “Top Chef” contestant – which included making a two-month commitment to being incommunicado while filming the show in locales throughout Colorado.

“It was a great opportunity. A lot of people asked me why I went on the show. I have two restaurants already that are fairly successful,” Anderson said. “The big reason is that I think there’s a lot of great things going on in the state of Connecticut and there’s never been a competitor [from the state].”

The level of intensity required to do “Top Chef” doesn’t even compare to anything he’s ever done before.

“The most challenging thing was relinquishing all control in your life,” Anderson said.

He handed in his cellphone and had no access to his computer or social media accounts for the duration of the filming. He was able to occasionally FaceTime his fiancee and children in a controlled environment – but other than his immediate family and business partners, no one knew, or was permitted to know, why he was MIA.

Anderson had to report to Denver just as the build-out for Cook and the Bear was being completed. The long-awaited opening of the West Hartford restaurant was further delayed until the middle of July so that Anderson wouldn’t miss it.

Being a contestant on Top Chef was physically challenging, too.

“It wasn’t a sprint, it was a marathon,” Anderson said. One of the other contestants was wearing a Fitbit, and there was a day that he logged 47,000 steps.

Despite being surrounded by food, and having anything he wanted to eat at his disposal, Anderson said he actually lost weight.

Anderson said he’s not at liberty to discuss any of his accommodations other than the first stop – which was a mansion in the middle of Denver.

“It had a yoga room. They filled the refrigerator with anything we wanted from the store, anything you wanted to drink,” he said. “They really treat you like an angel.”

Anderson said that surprisingly his favorite part of the experience was working with the other contestants. “At 40 years old I didn’t think I would be okay with having 14 roommates and living alongside all these people.”

They were awesome people, he said –  very diverse group “gender-wise, ethnically, and cooking backgrounds.” He had the opportunity to learn from everyone and made some great friends.

Earlier this week he teamed up to cook with fellow contestant Bruce Kalman of Los Angeles at the Taste of the Nation Hartford fundraiser for No Kid Hungry. He’s teaming up with another contestant at an upcoming dinner in January.

“It was a great experience being able to represent the state of Connecticut and Hartford County,” Anderson said of being on “Top Chef.” That was actually one of the key reasons he wanted to be on the show, to raise the visibility of the region, where there are so many talented chefs and fabulous restaurants.

“West Hartford has really become a great dining destination,” Anderson said. “We have some work to do getting it out on a national level and I think this will help.”

When Kalman was in town this week they went on a tasting tour through West Hartford –  visiting Savoy, INDIA, Zohara, and Bricco – and he said that the LA-based chef was really amazed by the variety and quality of the restaurants.

Anderson plans to host a viewing party at Cook and the Bear for the first episode of season 15 of “Top Chef,” which premieres on Thursday, Dec. 7 at 10 p.m. on Bravo. He’ll invite family and friends, and install a few extra TVs in the restaurant, but Anderson said he’ll personally be hiding out in the kitchen, cooking.

“I don’t want to watch with anybody. I don’t like to watch myself on TV. I’ll probably watch the next day,” he said.

So far he hasn’t seen any of the show other than the trailer, which is available for viewing by the public (click here to watch).

Anderson said he would not entered an open casting call for “Top Chef,” where a daunting number of people audition for the 15 spots. He hadn’t even considered applying to be on the show until he was contacted directly by the casting director.

He said the contestants are chosen for their diversity and their personalities, as well as cooking skills.

“Top Chef” is hosted  Padma Lakshmi, and features head judge Tom Colicchio as well as Gail Simmons and Graham Elliot. The winner receives $125,000, a feature in Food & Wine magazine, a showcase at the annual Food & Wine Classic in Aspen, and, of course, the right to be called “Top Chef.”

Anderson’s resume already includes a lengthy list of accolades: four-time James Beard nominee, Chef of the Year by the Connecticut Restaurant Association in 2014, chef chair of Taste of the Nation Hartford, winner of “Chopped” in 2009.

Anderson is sworn to secrecy, can’t say much more about the experience and certainly can’t share any information about the results. “You’ll have to watch the show,” he said.