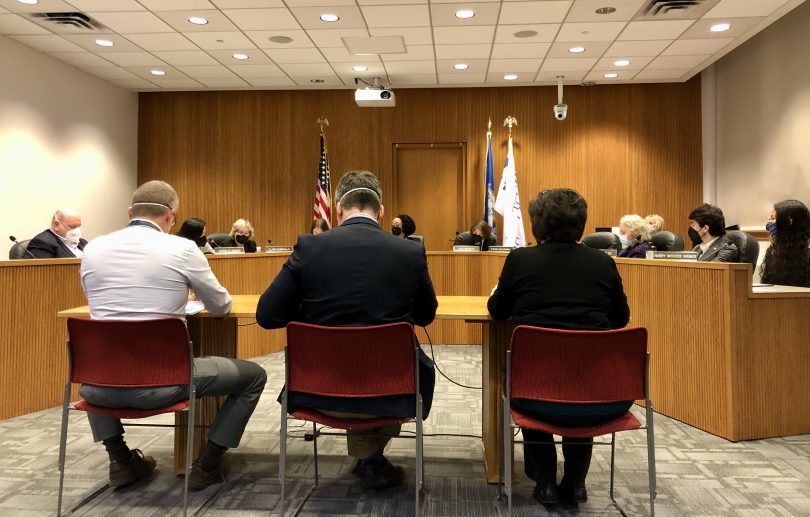 The West Hartford Board of Education began the budget process Tuesday night with a review of the Capital Improvement Plan and enrollment projections. Photo credit: Ronni Newton

The West Hartford Board of Education received the Capital Improvement Plan at Tuesday night’s meeting, and also heard a presentation on enrollment.

The West Hartford Board of Education took the first official steps in reviewing its budget for the next fiscal year on Tuesday night with a discussion of the Capital Improvement Plan and enrollment projections.

“This begins our formal budget process for the year,” said Assistant Superintendent Andy Morrow, who presented the proposed CIP to the Board, along with a summary of work done over the past fiscal year.

Shipping and other supply chain delays impacted some of the projects that the district had hoped to complete during a short window of time in the summer of 2021 – roughly the two month-period from June 20 through Aug. 20. “We have a very short time when students are not in the building,” Morrow said, and there is a very ambitious plan for work to be completed this coming summer.

The proposal for FY 2022-2023 is $11,821,000 – with the significant additions of $3,093,000 for the first year of a 15-year program to improve air quality at nine of the town’s 11 elementary schools that do not currently have building-wide fresh air handling and air conditioning systems, as well as a one-year addition of $3,000,000 for replacement of all 24 tennis courts at the high schools.

Duffy Elementary School, which is two stories and includes the original windows, many of which do not open, and ventilation system dating back to its construction in the 1950s, will be the first to receive the upgrades, which will be made over the course of two summers beginning this year.

The cost of the elementary school air quality improvements are estimated to increase slightly each year as the project progresses.

The existing tennis courts at Conard and Hall, which are roughly 25 years old, are at the end of their serviceable life and will be completely reconstructed using a new technology – post tension concrete. The project, which is a collaboration with the town, Superintendent Tom Moore said, will include new exterior fencing and nets. “There’s a guarantee of 20 years and we expect them to last 30,” he said.

Director of Plant and Facilities Bob Palmer said that in addition to COVID-related issues, a few projects due to be completed last summer had to be postponed for other reasons. Those include installation of an air handler at King Philip Middle School and renovation to the culinary kitchen at Hall High School, both of which were delayed due to design issues. The replacement of bleachers on the visitor side of the Conard High School stadium and playground equipment at Wolcott Elementary School, as well as renovations to the stage and auditorium at both Hall and King Philip, however, were postponed until this summer due to supply chain delays.

Director of Finance and Planning Liz Hewitt said the funds for the projects included in the CIP – most of which are financed through bonds sold by the town – are allocated to the year for which they are appropriated. The funds remain available even if the projects need to be postponed, and do not impact the CIP in subsequent years.

Many of the projects included in the CIP are done on a cyclical basis – like paving, replacement of flooring and roofing, and new boilers. “We have excellent buildings that are in some case approaching 100 years old … that we have to take care of in order to maintain,” Moore said.

The CIP will be adopted at the Board of Education’s Feb. 1 meeting. Tuesday’s presentation can be found as a PDF below.

In addition to reviewing the CIP, the Board received a report from Chip Ward, who retired from West Hartford Public Schools as the director of finance and planning several years ago but is engaged annually to provide enrollment projections.

Ward has been projecting enrollment for West Hartford Public Schools for more than 20 years, and by looking at birth trends and the “cohort survival ratio (CSR),” Ward is continuing to project a gradual decline in overall enrollment with adequate capacity in all school buildings.

Factors in estimating enrollment include the number of births in town – which have gradually declined from an average of 700 to 600. Families, however, often move to West Hartford when their children are ready to attend school and that is contemplated in the CSR. Other factors Ward uses in determining the CSR include families choosing to send their children to private, parochial, or magnet schools, families moving in or out of town due to economics, and turnover in the real estate market.

“COVID-19 is another factor baked into the average,” Ward told the Board, and will probably end up being a net wash.  The district experienced a larger-than-expected loss of students for the 2020-2021 academic year, but a smaller-than-initially-projected loss for the current academic year as students returned to the district.

Ward is projecting overall enrollment to gradually drop to 7,944 over the course of the next 10 years, with an average decrease of 84 students per year based on “decline in the number births in West Hartford since 2001 and the declining trend statewide in K-12 enrollments.”

Enrollment declines have already impacted the elementary schools, and that population is expected to remain stable, fluctuating between 3,700 and 3,800 students. The enrollment decline at the middle school level has nearly reached its floor and while it may fluctuate between King Philip and Sedgwick (Bristow has a fixed population based on a lottery), the overall population will soon stabilize and remain at roughly 1,800 in grades 6-8.

The enrollment decrease over the next several years will have the greatest impact at the high schools, Ward said.

As enrollment declines, the district reduces the number of sections. While there are fewer classes, Moore said, theoretically “that doesn’t mean there are less courses.”

Ward’s presentation, which includes detailed charts and projections on a school-by-school level, can be found as a PDF below.