[Updated, 5 p.m.] Snow began falling before dawn, and by early afternoon reached more than 14 inches in many neighborhoods. 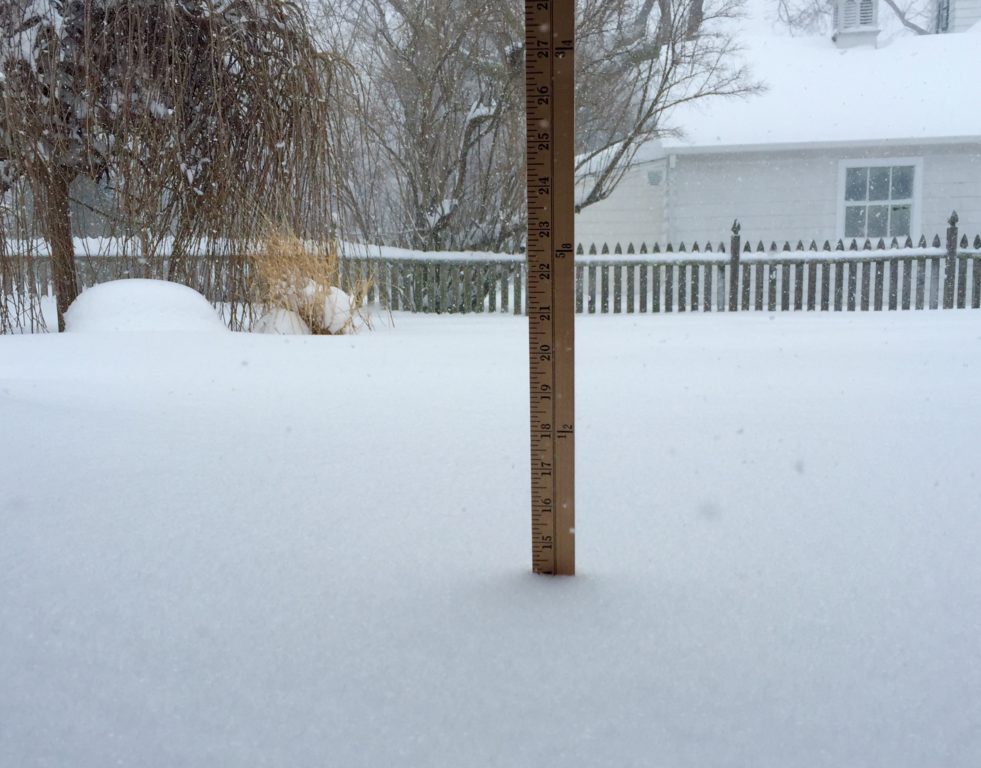 At 1 p.m., 14 inches of snow had fallen in West Hartford, with higher amounts in drifts. Photo credit: Ronni Newton

Director of Public Works John Phillips said that the parking ban will remain in effect until Friday morning.

Crews are still working to open and clear neighborhood streets, and will have to go back and do a final clearing of main roads as well, Phillips said. 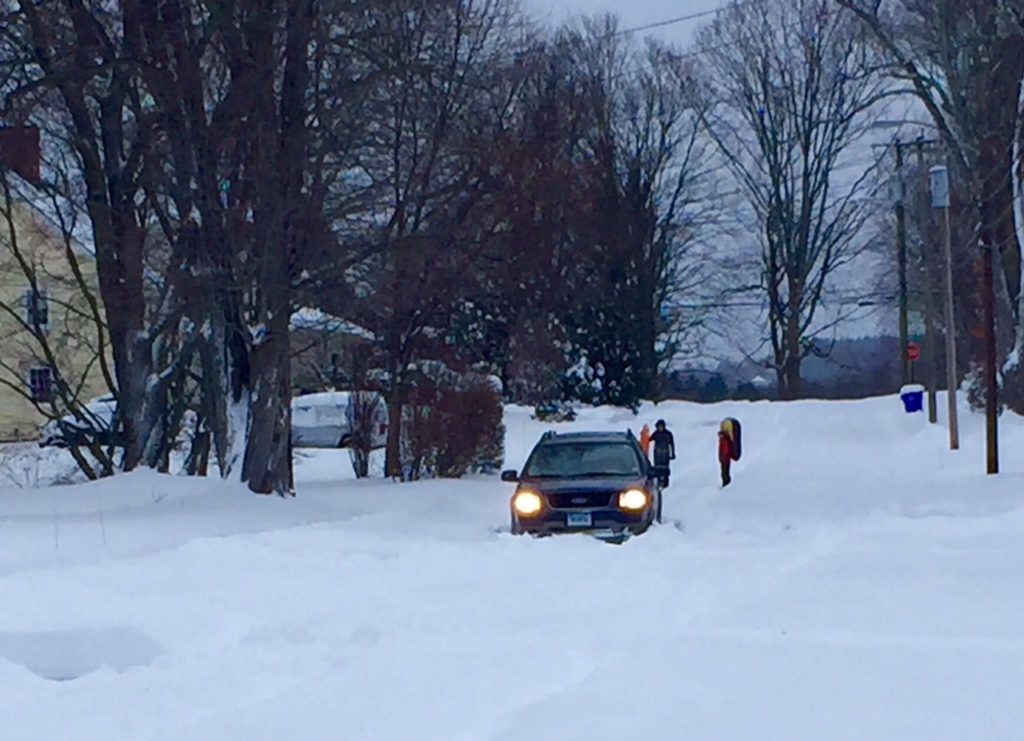 This car attempted to navigate an unplowed neighborhood street, and got stuck. The plow came by about 2 minutes later. Photo credit: Ronni Newton (taken on snowshoes)

“We anticipate traffic will pick up this evening but we still advise people to stay home,” he said. “Unplowed side streets are still impassible [see photo at right of a stuck car] and the berm of snow to a cleared street will be like hitting a wall. You will get stuck.”

Phillips said it will take all night to clear the town’s 218 miles of roadway. Reported snow totals in West Hartford range from 14 to 16 inches, and drifts of well over 2 feet in certain areas.

Phillips said that Paine’s was able to pick up trash and recycling at about 80 percent of the homes that have Thursday collection – the best they could do in some very difficult travel conditions. Anyone who has not had their barrels emptied will have pick-up on Friday along with the regular Friday collection area, he said.

Most roads in West Hartford were devoid of traffic and cars Thursday – other than snow plows – as a strong nor’easter dumped more than a foot of snow on the town and the region.

By 1 p.m., an estimated 14 inches of snow had fallen in West Hartford. Thunder and lightning accompanied the snow throughout the morning. The wind continued to howl at speeds of more than 20 mph throughout the day.

Director of Public Works John Phillips said just after 1 p.m. Thursday that plowing and clearing conditions have been challenging, but as expected for this type of storm. 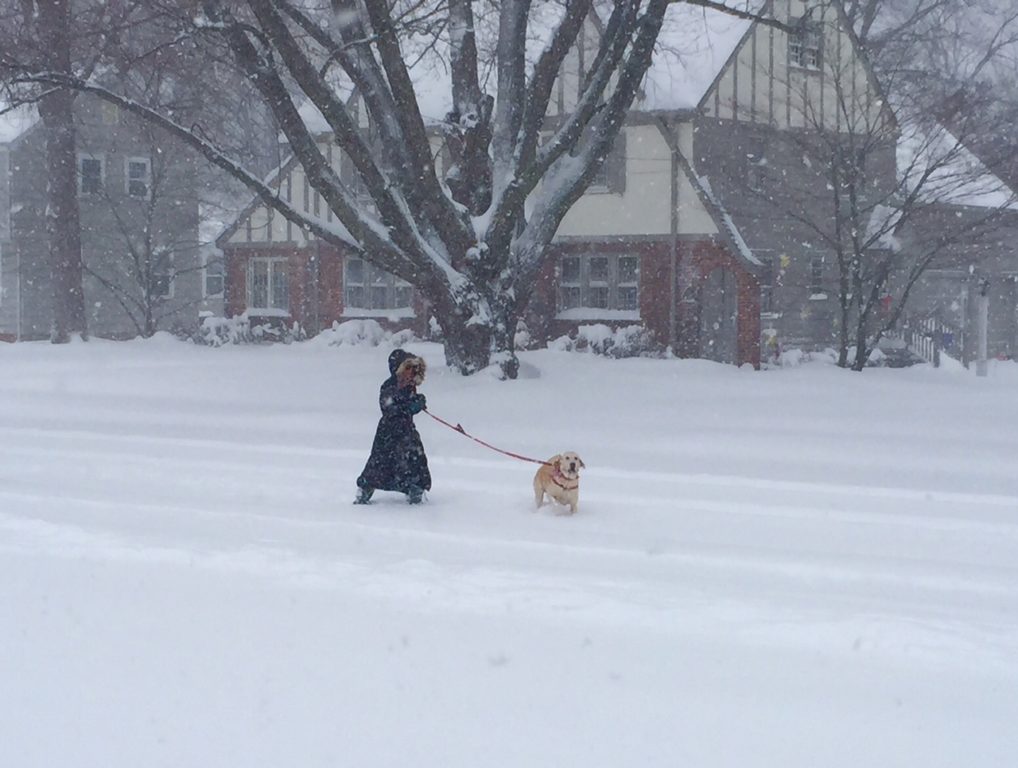 Dog walking was a challenge, even on snow shoes! Photo credit: Ronni Newton

Most side streets have 10-plus inches of accumulated snow, but Phillips said that crews will be back for another round of plowing in the next several hours.

Public Works crews have also been assisting the West Hartford Fire Department throughout the day to ensure access for emergency calls, Phillips said.

Phillips said that all DPW trucks and contractors have been dispatched and are working throughout the storm. “There is a lot of snow to be pushed and it will take time to reach all 218 miles of road. Fourteen inches of snow in five hours is an incredible amount to deal with. Crews have shown great stamina and resilience thus far as they always do in these situations,” Phillips said.

Schools, town offices, and many retailers and restaurants decided to close for the day. Chick-fil-A, which had scheduled a grand opening for Thursday morning, initially moved the opening to 4 p.m. and then decided to reschedule for 6:30 a.m. Friday due to road conditions and the safety of customers and employees.

Some drivers were out on the roads anyway, and Phillips said that cars are stuck in snow banks throughout town. In some cases streets cannot be cleared completely because of a stuck car, and those situations add to the effectiveness and amount of time it takes to plow.

“I want to personally thank everyone that complied with the parking ban,” Phillips said. “Other than a few very isolated situations, the parking ban was very effective.”

He said that the ban will remain in effect until the streets have been cleared, and it will likely extend into Friday morning.

According to the National Weather Service, the snow should wind down by 5 p.m. Thursday with a total accumulation forecast of up to 19 inches.

Melting is not expected anytime soon, since temperatures are expected to remain below freezing until at least Saturday afternoon.

Director of Human and Leisure Services Helen Rubino-Turco provided some photos (below) of Westmoor Park, where the animals were weathering the storm.

Check back for additional updates. 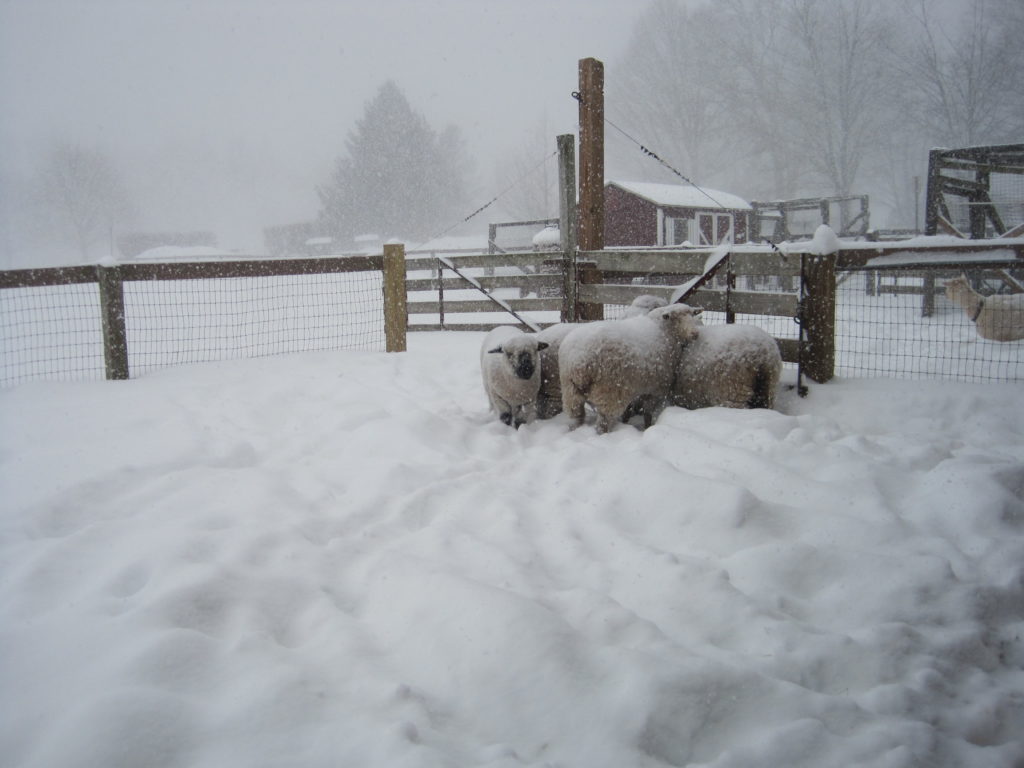 Sheep huddle at Westmoor Park to stay warm in the snowstorm on Thursday. Photo by Doug Jackson, courtesy of Helen Rubino-Turco 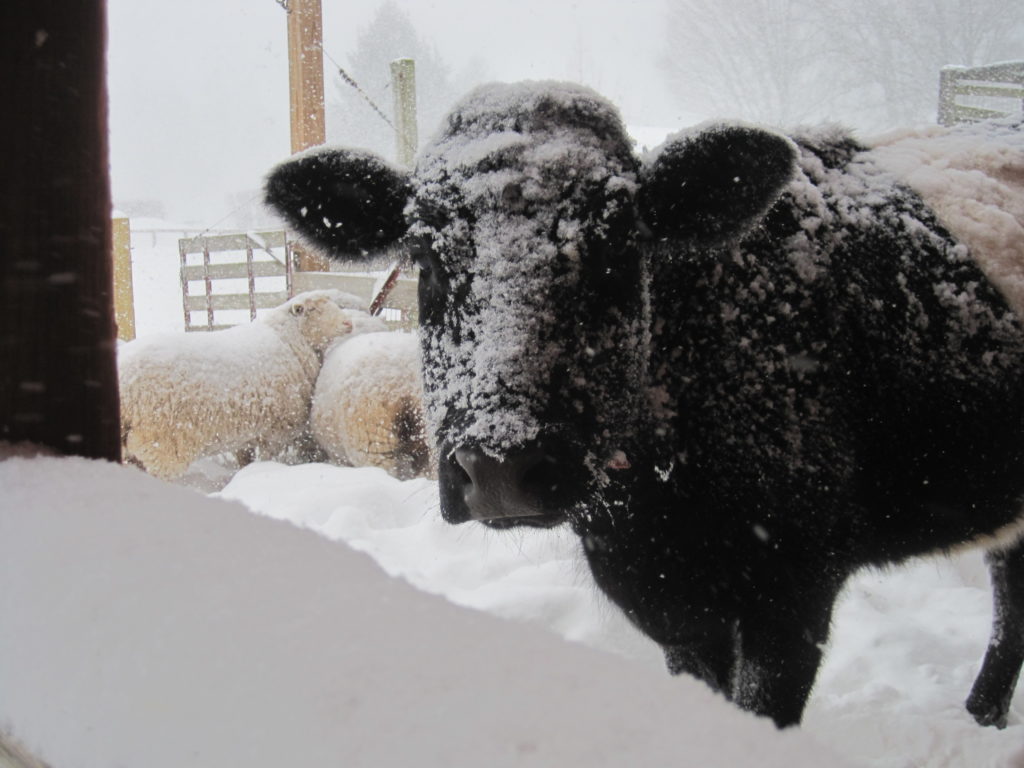 A cow at Westmoor Park doesn’t seem to mind the snow. Photo by Doug Jackson, courtesy of Helen Rubino-Turco 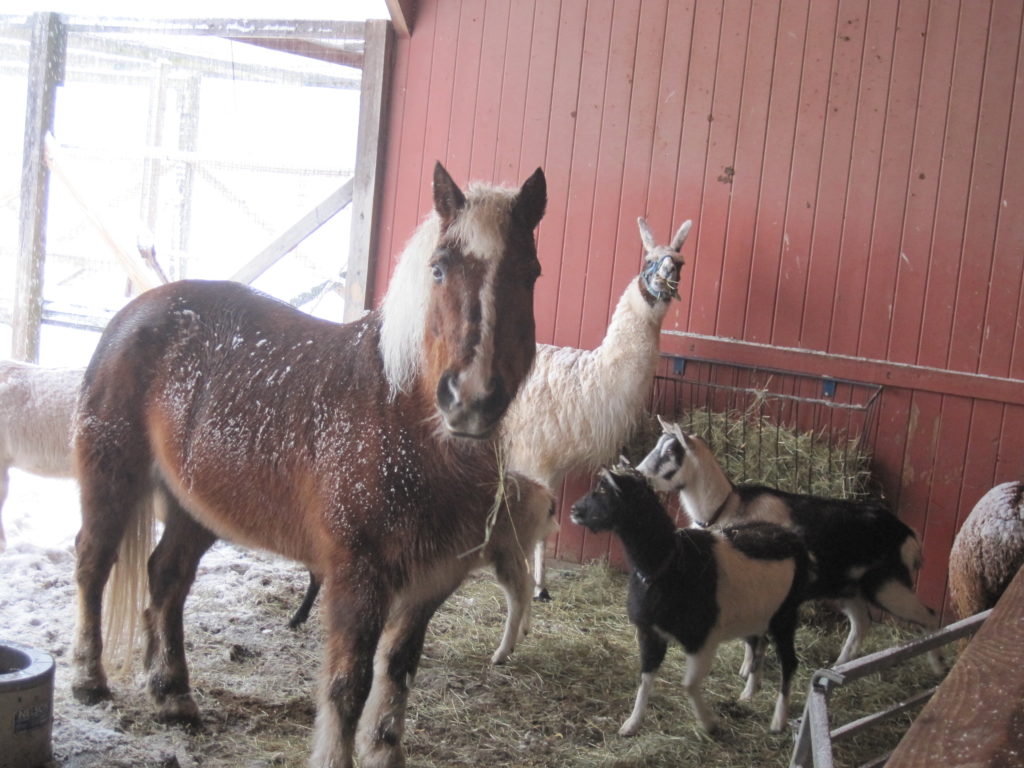 Horses and other animals at Westmoor Park stay safe in the barn. Photo by Doug Jackson, courtesy of Helen Rubino-Turco 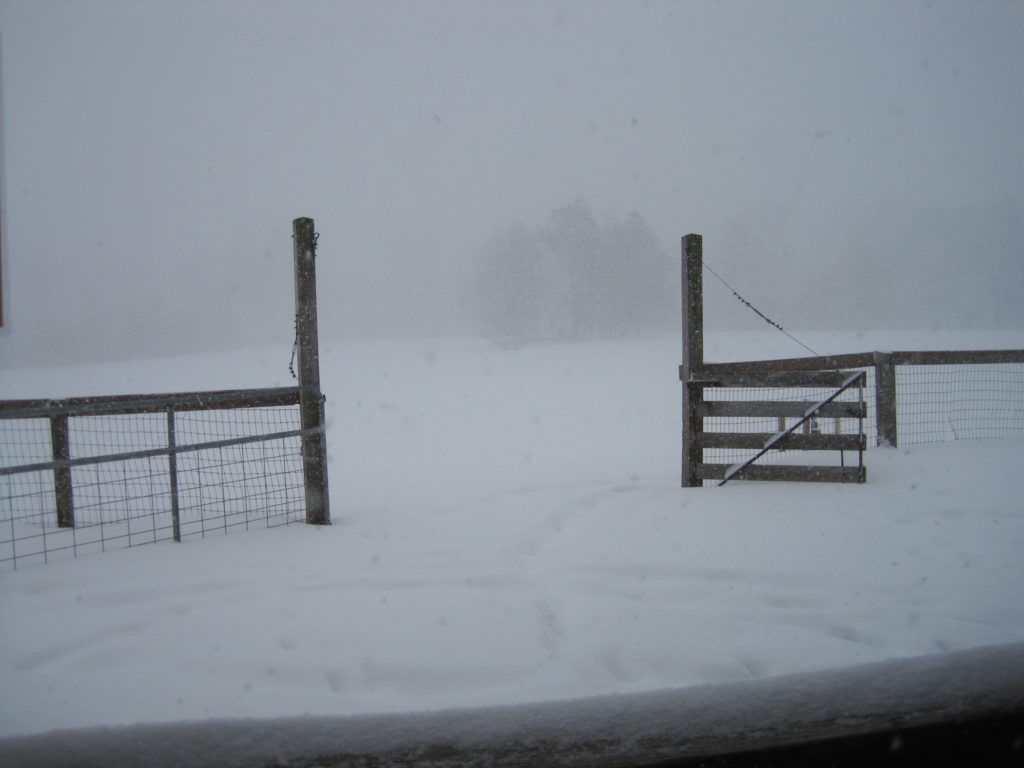 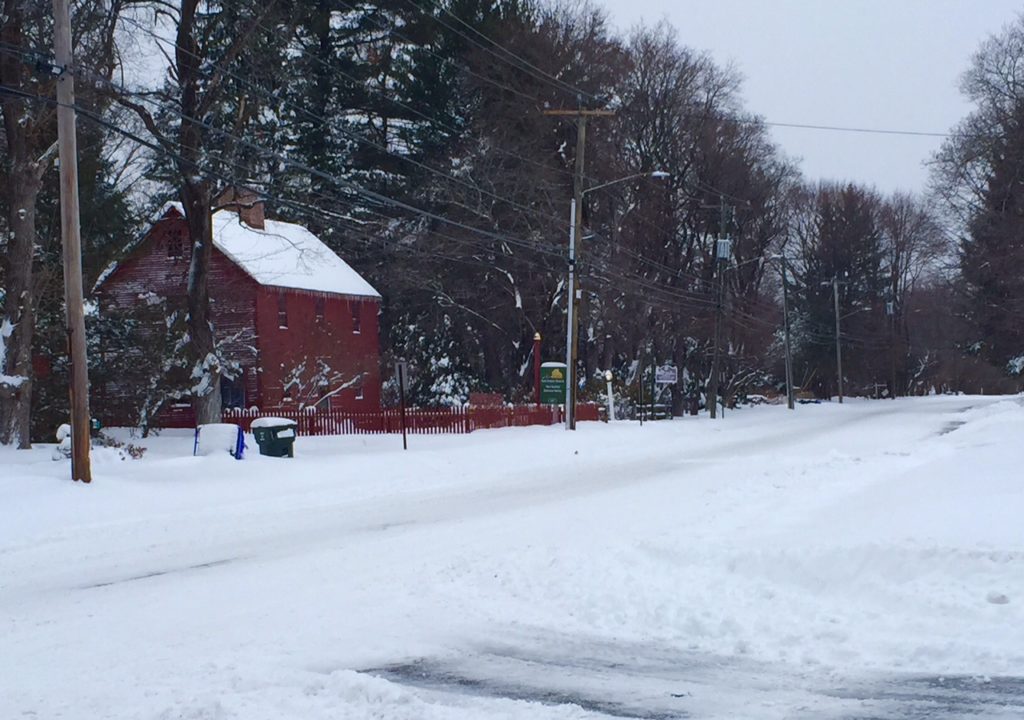 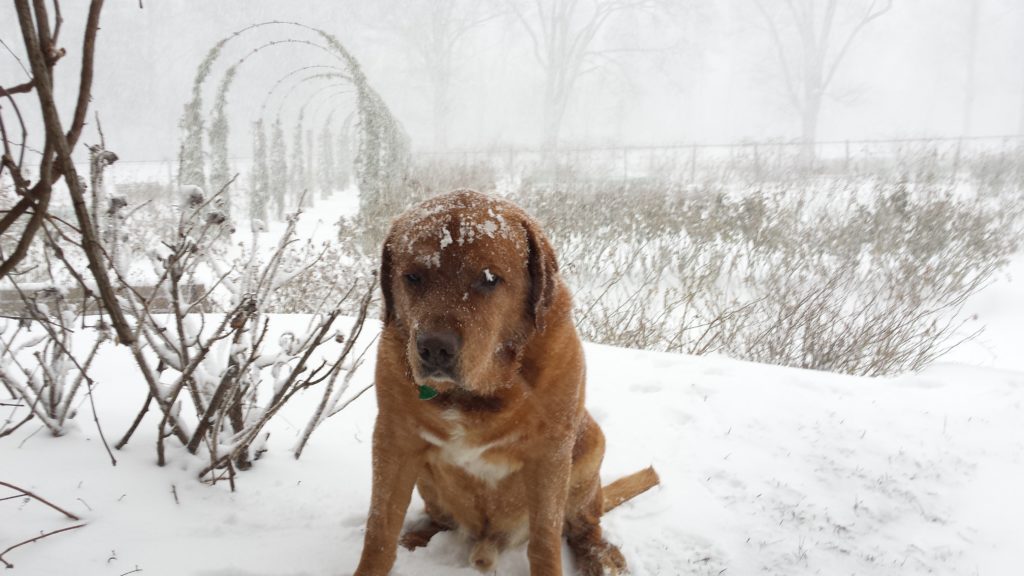 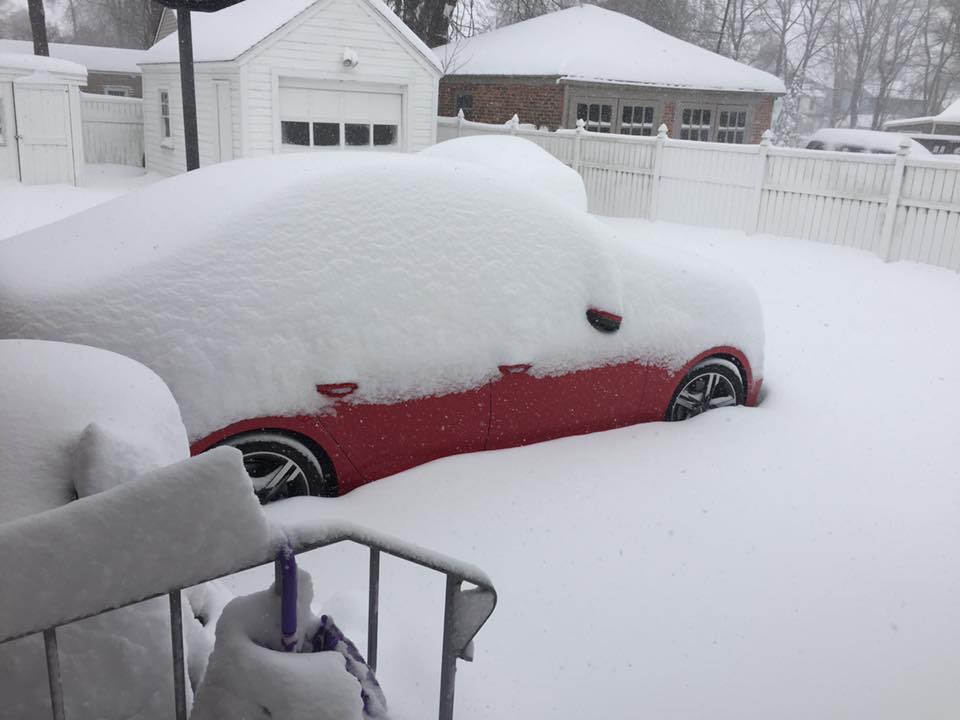 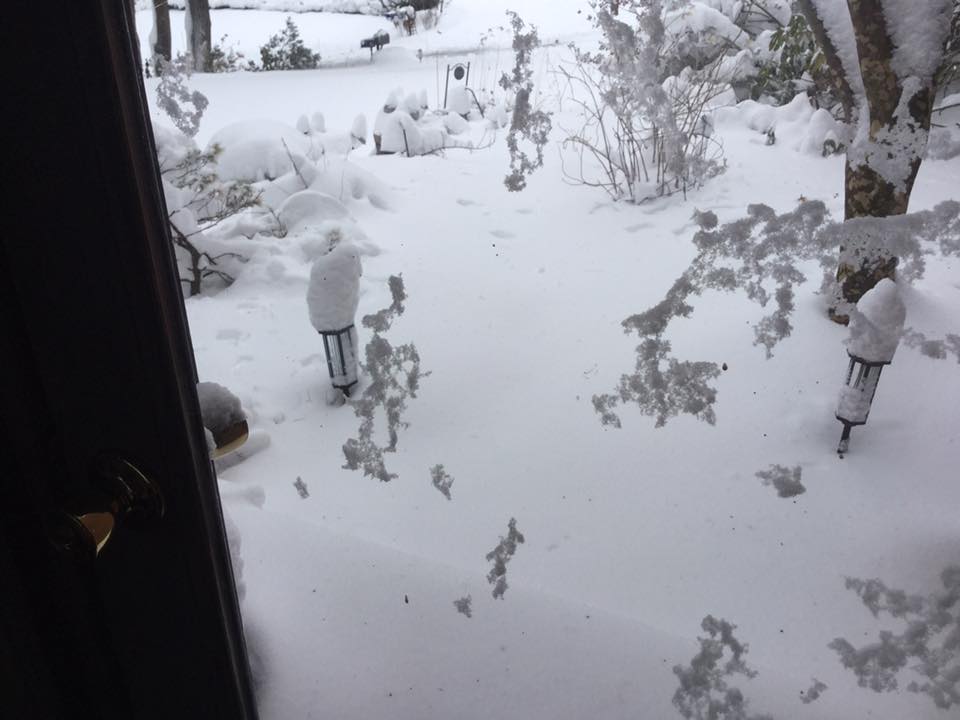