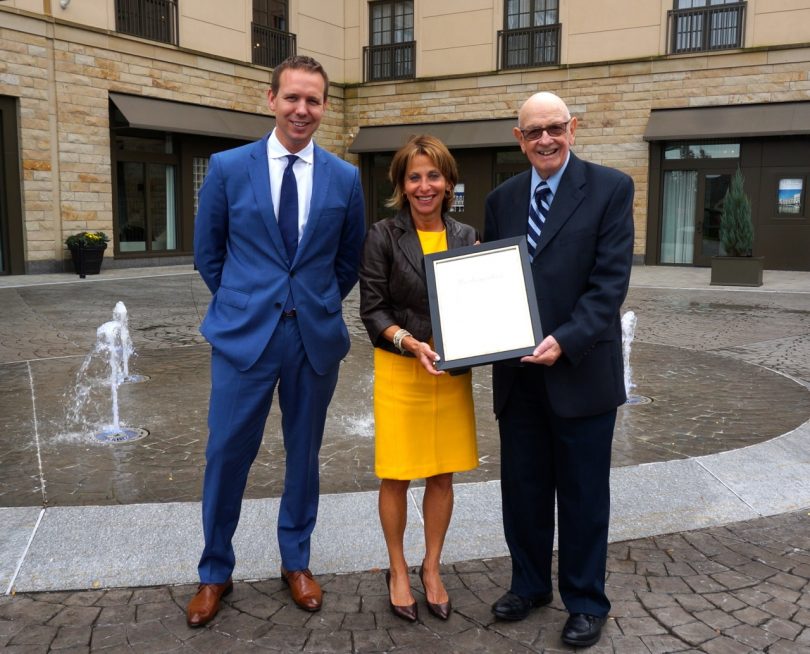 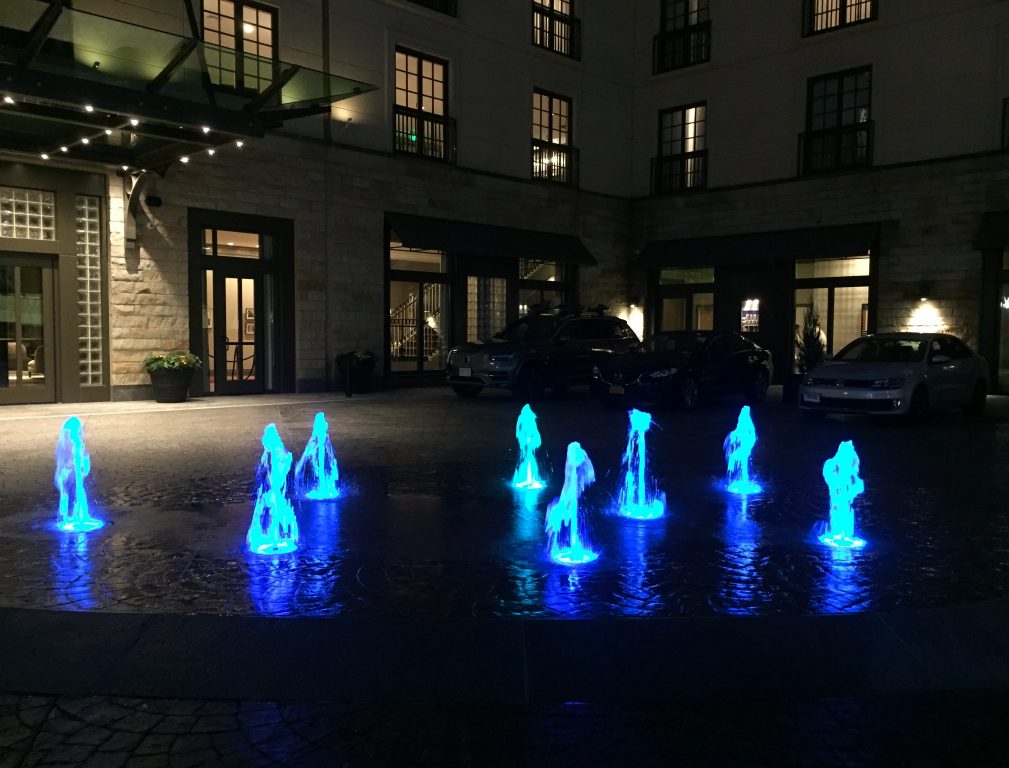 For several days during the last week of September, the water bubbling out of the fountain in front of the Delamar West Hartford Hotel glowed blue, as the hotel joined other buildings and structures throughout the country in raising awareness for pulmonary fibrosis.

“We really appreciate the Delamar West Hartford Hotel for turning their fountain blue for us to make them aware of the fact that this is Pulmonary Fibrosis Awareness Month,” Doyle said. “The Delamar is going to be listed with other iconic buildings throughout the entire country [for its participation].”

Other places nationwide that have “gone blue” to raise awareness, and promoted the cause through the social media campaign “#BlueUp4PF,” included Niagara Falls, the Superdome in New Orleans, and the John Hancock Center in Chicago.

Doyle said that he was diagnosed with the lung disease pulmonary fibrosis at the beginning of February. “For people with this disease, it’s very difficult for us to take oxygen in and transfer it to the airways that make us breath easier, so we have trouble breathing, walking long distances, and also just trying to do everyday activities like mowing lawns.”

Doyle said that when he received his diagnosis he was told he would only have a short time to live and he initially felt sorry for himself, but just a few weeks later decided to start the Greater Hartford Pulmonary Fibrosis Support Group.

The group began meeting in May at the Dunkin Donuts at New Britain Avenue and South Main Street, but when Elmwood Senior Center Director Kathleen Faroni found out about it, she offered space at the Elmwood Senior Center and helped Doyle promote the existence of the Greater Hartford Pulmonary Fibrosis Support Group. Doyle said he knew Faroni because for the past 10 years he has taught the AARP Smart Driver course at the Senior Center.

Doyle said that there are 50,000 people who are diagnosed with pulmonary fibrosis every year, and 40,000 die annually from the disease, which has no known cure. The prognosis differs depending on the type of pulmonary fibrosis a patient has. Doyle, who appears completely healthy, said he has idiopathic pulmonary fibrosis, a progressive and life-threatening form of the disease, but fully plans to defy the odds and live much longer than expected.

“I think Mal is an inspiration to all of us,” Delamar Regional Director of Operations Daniel Coggins said. “He’s taken the diagnosis and run with it, looking to spread awareness of this disease. For me [turning the fountain blue] was just an easy decision to make. Community outreach is a big part of what we do here in West Hartford and if we can help bring awareness to the cause and to the town it’s something that we’re thrilled to be a part of.”

Cantor said that she’s so proud of Doyle. “He had this serious diagnosis and he took action to improve other peoples’ lives, to get early recognition of the disease,” she said, in the hope that early intervention will lead to a better outcome.

“We’re so thrilled that the Delamar jumped right in and is a leader in community outreach to support this important cause,” Cantor said. 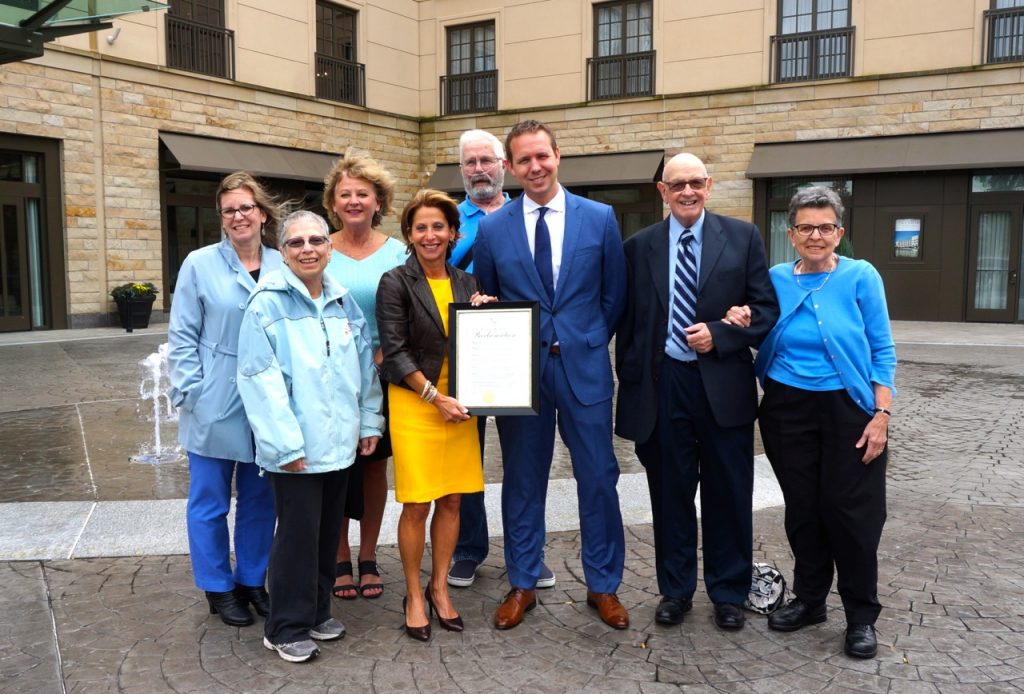 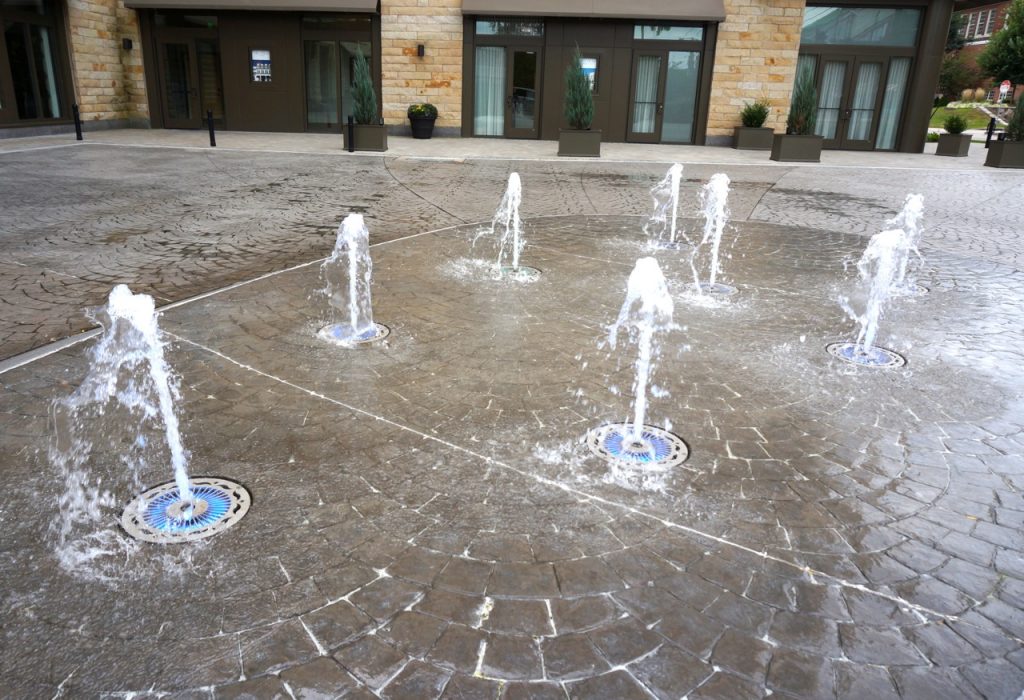 Daytime view of the fountain in front of the Delamar West Hartford Hotel, which was turned blue for several days in September for Pulmonary Fibrosis Awareness. Photo credit: Ronni Newton