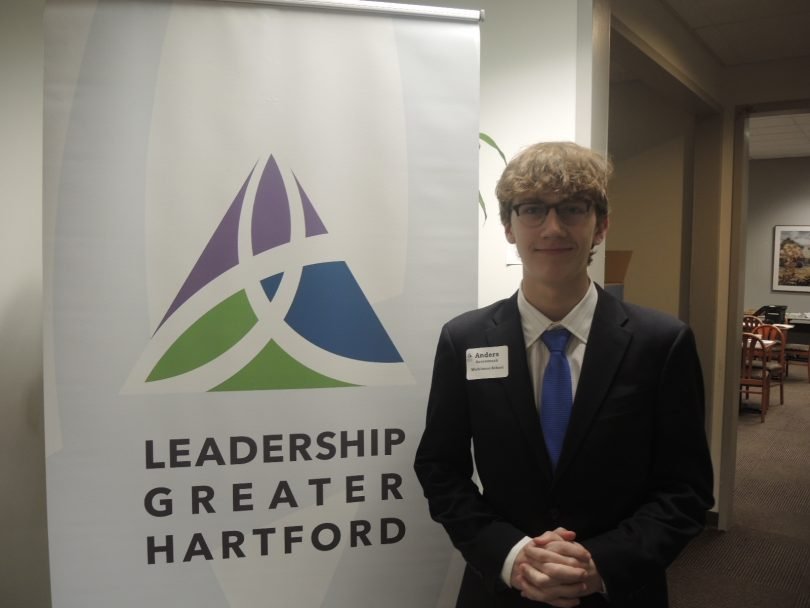 Two Watkinson School sophomores, including one from West Hartford, were chosen to Sspeak at Leadership Greater Hartford’s Common Ground Graduation.

Watkinson’s Head of School, Teri Schrader, was represented as a local leader and chosen to be the keynote speaker at the event this year. Two other Watkinson community members were also picked to speak –  sophomores Anders Aavatsmark (West Hartford) and David Evans (Manchester) who were two of the graduates participating in the event.

Eight schools were represented that evening, and of the 27 members graduating that night, Anders and David were two of five student speakers chosen to present their speeches about how the program impacted them. Anders and David were joined by two Watkinson classmates – Olivia Carrabba (West Hartford) and Shamarla King (Hartford) – making a total of four Watkinson students in the group of 27 graduates.

On having the opportunity to represent his peers, Anders said he was “grateful” to have been picked, and when asked about the message he relayed in his speech, he said, “Common Ground is a really cool thing, and it can benefit anyone who believes in themselves and wants to improve as a person. I thought it was important since leadership skills are not necessarily taught in regular curriculum, and this program helped us to develop those skills.”

Leadership Greater Hartford is a non-profit organization whose goal is to build a leadership capacity for people of all ages. The Common Ground program reaches the youngest audience LGH works with, specifically high school sophomores and juniors.