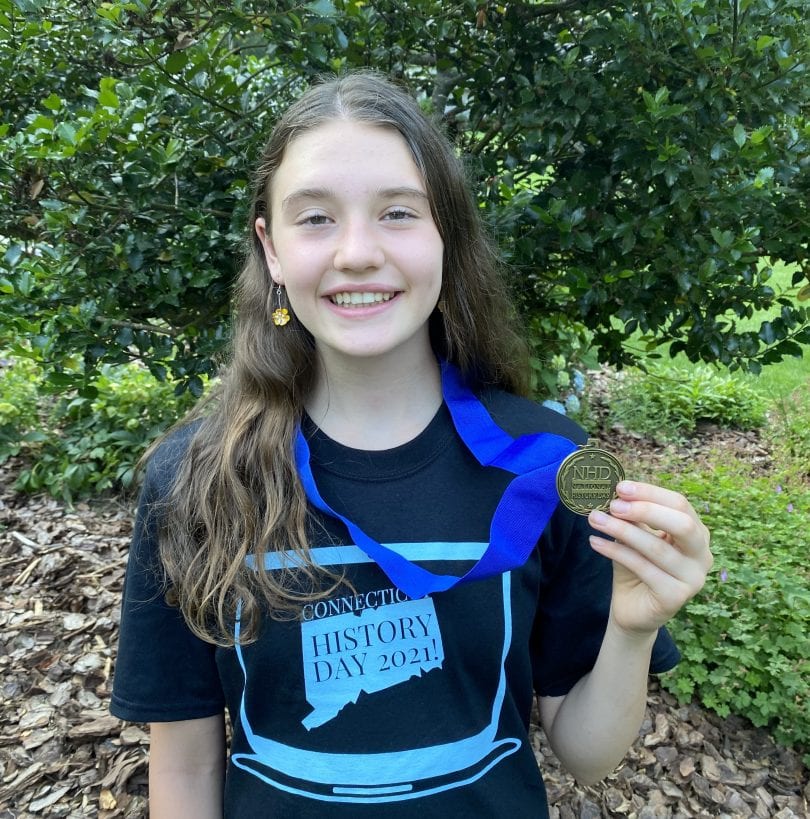 West Hartford resident Claire Flynn loves history, and she loves technology, and in 2021 she combined both and was awarded the top prize in the National History Day Competition in the Junior Individual Documentary Category for her film, “Clearing the Air: How John Hersey Communicated Hiroshima Survivors’ Stories to the World and Changed the Global Perspective on Nuclear Weapons,” which she created while an eighth-grader at Sedgwick Middle School.

Claire was also honored with the Next Generation Angels Award sponsored by the Better Angels Society – a nonprofit organization designed to continue the legacy of filmmaker Ken Burns and “to engage and empower the next generation of documentary filmmakers. As a recipient of the Next Generation Angels Award, she will have the opportunity to work directly with Burns and other professional documentary filmmakers to hone her craft.

Students in Sedgwick Middle School’s QUEST gifted and talented program often create a submission for the History Day competition as their year-end project, and this was Claire’s first documentary. She had entered the competition with an exhibit in the two prior years, and as a seventh-grader also made it to the National History Day level, earning a place in the top five for her “Cycling on the Road to Freedom” exhibit focused on how the invention of the bicycle created opportunities for women.

“I love technology and the challenges,” Claire said in a phone interview. Creating a documentary would be a new challenge.

As for her choice of topic, that idea formed last August, when it was the 75th anniversary of the bombing of Hiroshima. She learned about John Hersey’s notable book, “Hiroshima,” published in 1946, which tells the story of six survivors of the bombing. 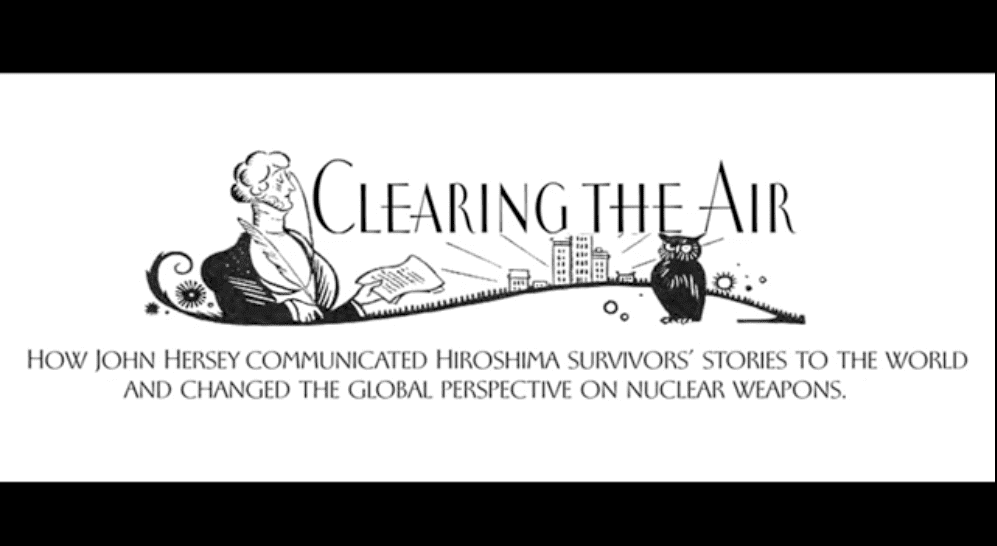 Screenshot from documentary by Claire Flynn

“John Hersey took something that was a household name and made it personal,” Claire said. Rather than looking at the bombing abstractly, and the people as just numbers, he looked at the human side.

“It becomes part of the healing process,” Claire said.

In creating the documentary, she said she improved her writing and editing skills, and learned how to conduct professional and formal interviews, including with a United Nationals official who was involved with the disarmament, and a woman who was a Hiroshima survivor herself.

“She was just 13 years old,” Claire said. “The same age I was when I did the interview.”

“I have been teaching in public schools for 24 years, and Claire is the type of student a teacher is fortunate to cross paths with once in a career. She is a true inspiration,” said David Lee, Claire’s teacher in the QUEST program at Sedgwick for the past two years.

“The work itself was all Claire,” Lee said. “The skills were all there. … I was just there to facilitate.”

One of the things that impressed Lee the most is that Claire so readily absorbed the feedback of the judges at each level. After the regional and Connecticut competitions, she re-did her voiceover of the documentary, improving it based on the advice she received.

“I definitely used that feedback to dramatically improve my project,” Clare said. “It took my documentary to the next level.”

Claire expressed her gratitude to Lee for his support of the project, and Sedgwick Middle School, for providing students with opportunities like participating in History Day.

She will be a freshman at Conard High School in the fall, and looks forward to getting involved with the newspaper, the debate club, and also plans to continue to participate in History Day.

“Conard students have done pretty well at History Day in the past, so I’m looking forward to being part of the History Day Club at Conard, too,” Claire said.

As one of six middle and high school filmmakers recognized nationally with the Next Generation Angels Award for “excellence in ideologically balanced, well-researched history filmmaking in the model of Ken Burns,” she’s also looking forward to the opportunity to work with documentary filmmakers like Burns.

The six student winners also earn a trip to Washington, DC where they are recognized as part of the Library of Congress Lavine/Ken Burns Award for Film, a professional award.

“[Claire’s documentary] is now the gold standard,” Lee said, what he will share with his future Sedgwick students as an example of an outstanding project.

According to the Connecticut Democracy Center, 21 students from across Connecticut – the most ever from the state – received awards at the 2021 National History Day Contest, this year held as a virtual event. The theme was “Communication in History: The Key to Understanding.”

“I’m so proud of Connecticut’s students for persevering through a really difficult year to do amazing research on creative topics,” State Coordinator Rebecca Taber said in a news release.  “The students’ hard work is reflected in Connecticut’s strong showing at the National Contest. Congratulations to the teachers and students!”

Inspired by the theme Communication in History: The Key to Understanding, high school and middle school students wrote papers, created exhibits, produced documentaries, designed websites and staged performances exploring topics ranging from Prudence Crandall to the Beatles to the creation of the telegraph.

Claire’s documentary will be available for viewing later this summer on the National History Day website as well as the Better Angels Society website.