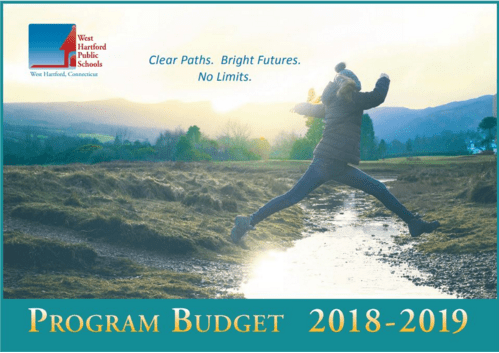 The annual budget season officially began in West Hartford with the presentation of the superintendent’s proposed general fund budget to the Board of Education Tuesday night.

“The hallmark of the democratic process in town government is the approval of the school budget followed by the town budget,” Moore told the Board. “We talk about what we believe in then we show what we believe in by how we spend our money.”

The roll forward budget – looking at keeping the exact same programs and services next year as this year, is $163,544,223, a $3.69 million (2.31 percent) increase due to the impact of negotiated salary contracts, benefits, and increases in the cost of energy and transportation. The wage increases are impacted by contractual step increases for the district’s many young teachers, but a hiring freeze resulted in a surplus in 2017-18 of $1.1 million, which will be rolled over into the next budget and offset the contractual increases.

“Medical expenses [for this year] are projected to be under budget by our consultant,” Moore said, and the administration feels comfortable with that analysis. A typical growth rate in claims will be used for budgeting purposes and results in a “flat” allocation for the 2018-19 budget.

Pension expenses for employees other than teachers will be decreasing by about $310,000. In the past the education budget paid for 25 percent of town pension costs, but an actuarial analysis has dropped that share to 21.33 percent of the total. The change will have the reverse impact on the town budget.

Transportation increases of about $480,000 are largely due to increases in the recently re-bid bus contract. “We chose the lowest bid but there’s only so much you can do,” Moore said.

Tuition expenses have increased by about $630,000 or 16 percent. Per student expenses keep increasing and but state reimbursements have been relatively flat. At the same time there are more out-of-district placements, Moore said.

The balance of the increases in the roll forward budget are utilities, rental costs for the American School for the Deaf building where the STRIVE program is now housed, the new copier contract (for which the low bid was selected) which was re-bid but still carries an increase, and inflation.

Added to the roll forward budget are “Superintendent Budget Changes” which add another $1,007,304 (0.63 percent) in total.

At the high school level, where a small senior class will be replaced by a very large ninth grade class, 5.5 additional FTE positions are being requested.

An increase of $200,000 is being budgeted for “School Refusal and Home Outreach,” Moore said, primarily for family engagement. “This is about those students that are not able to access the school environment,” he said, with anxiety and mental health issues as the primary reasons. It’s not just high school students, and an outreach coordinator, special education teacher, and two tutors will provide consultation. There are about 60 kids who require these services, and Moore said that “it’s the “biggest area of worrisome growth in the district.”

Moore is also pitching an increase of $100,000 for post-secondary program enhancements, something he is very excited about and urged the Board not to cut. Post-secondary education is required up to age 21, but abruptly stopping at that age and returning young adults to their parents, who may not be able to properly support them, is “an abomination to society,” Moore said.

He is proposing adding a foods program with a commercial kitchen for training at the ASD facility as well as space to help students learn about apartment-style living so that they can transition into independent living. Moore said he in discussion with Auer Farm about helping teach students about farm-to-table programs, and believes it’s important to use our natural resources.

Other requests for increased spending total about $270,000 and include raising the rate for TAs and substitutes to $90 per day, and $95 per day for special education TAs, to keep up with market conditions and ensure the positions can be filled. A 0.4 FTE interpreter for the hearing impaired is also being requested..

Breaking it down by category, salaries account for 64.6 percent of the overall proposed budget, and will increase by $3.06 million or 3 percent.

Benefits and pension costs are 20.3 percent of the budget and will decrease by about $150,000 (0.5 percent) while transportation/utilities/tuition, which represent 9.5 percent, will increase by about $1.31 million or 9.2 percent.

“Other expenses,” which include supplies, copiers, rents, and general insurance are proposed to grow by about $470,000 or 5.3 percent, Moore said. Those expenses are 5.7 percent of the district’s budget.

Moore said that best part of last year’s budget season was the way the community came out and really made demands about education in town, informing him and the Board what they would and would not stand for. “We’re trying to deliver what the entire community – not just parents – really demands from us and that’s excellence,” Moore said.

While “we always need more,” Moore said, the Board’s unique responsibility is finding the balance between what the community needs and what it will pay for.

One of the major drivers leading to increases in the budget over the past several years is the number of special education students which has grown by 105 students over the past five years. The associated costs of special education have also increased significantly, by 26.8 percent over the past five years. The trend isn’t unique to West Hartford, but the town has become a destination district for families moving to the area whose children have certain disabilities, Moore said. Increasing healthcare costs are also a driver, he said.

Before getting into the specifics of the numbers, Moore outlined the district’s unique demographics for the Board, and said that among the 9,678 students currently in pre-k through grade 12, there are 2,159 students (22 percent) living in a household that speaks a language other than English. Overall there are 74 different languages. “I can’t find another district with more home languages, I’ve checked,” Moore said, adding that West Hartford kids have a really unique cosmopolitan experience.

Another key demographic is that 4,146 students (43 percent) are minorities, a number that has been growing by about 1 percent a year.

There are 2,067 (21 percent) of West Hartford students who receive free or reduced price lunches. The threshold to receive reduced lunch is $41,500 income for a family of four, and a family of four earning less that $31,980 receives free lunch. Rents are high in West Hartford, and the one in five families receiving subsidies is willing to commit a large percentage of income to housing perhaps in order to live in the district, Moore said.

Currently there are 1,186 (12 percent) of students in pre-k through grade 12 receiving some type of special education services, Moore said.

In comparison to the rest of the state, 40 years ago West Hartford spent more than any other community in Connecticut, Moore said, and the town is now 117th, up slightly from the ranking the previous year due to healthcare increases. “I can promise you our expectations from our community are not 117 out of 169,” Moore said.

The average $15,671 per pupil spending in West Hartford is far below that of our reference district (DRG B), as well as the state overall and the largest districts within the state. If the town were to spend at those average levels, the budget would be anywhere from $6 to $12 million higher, Moore said.

The detailed budget is available on the West Hartford Public Schools website here. Suggestions can also be sent to [email protected].

Town Manager Matt Hart will be proposing the town’s Fiscal Year 2018-19 budget on Monday, March 12. That meeting beings at Town Hall at 7:30 p.m.