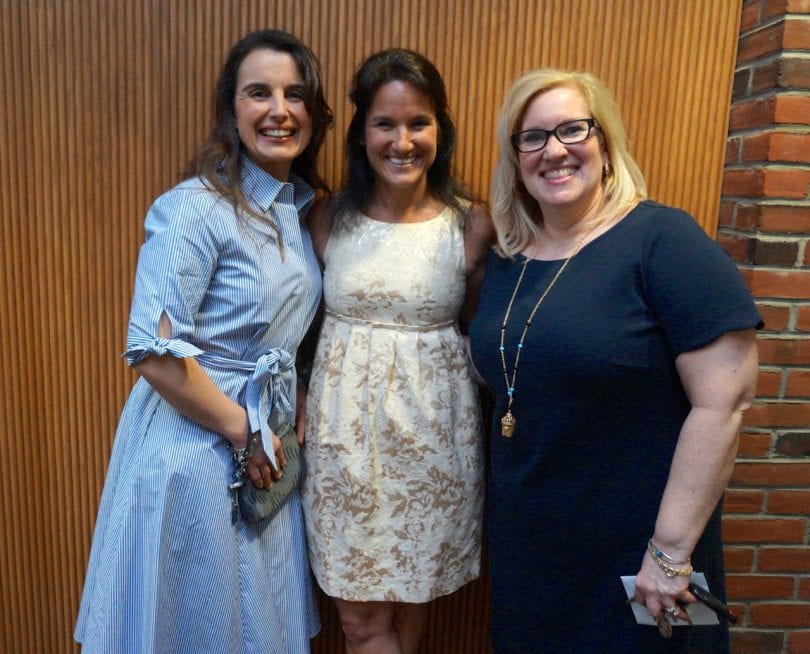 Three candidates who have been named finalists for West Hartford 2018 Teacher of the Year were recognized at a reception Tuesday evening just before the formal announcement was made at the Board of Education meeting by Superintendent Tom Moore.

This is the first time that any of them have been nominated and gone through the rigorous process that begins with being nominated by another teacher. Nominees must then submit their resume, an essay, recommendations, a videotaped lesson, and an interview by the Teacher of the Year committee. 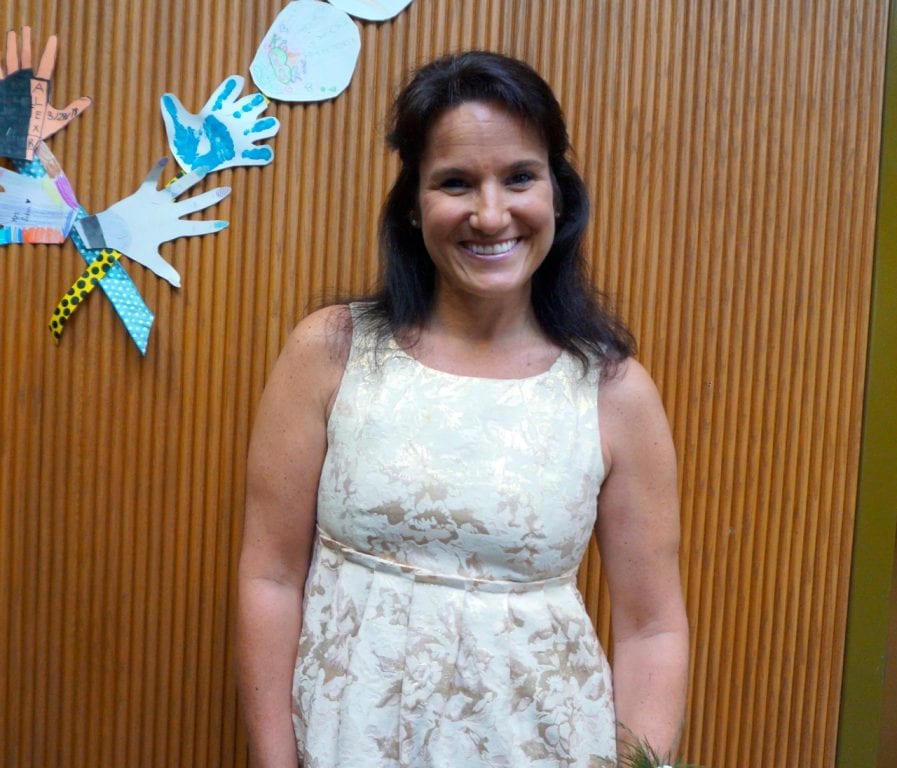 Lacroix is a 20-year resident of West Hartford and has been teaching in West Hartford Public Schools since August 2008. She taught special education at Whiting Lane Elementary School, then split her time between Whiting Lane and Norfeldt, and is now at Norfeldt.

“I’m incredibly honored. It’s been a great adventure,” Lacroix said of the Teacher of the Year process. She said that the process has been really interesting ad helped her grow personally and as an educator.

When asked about what may have led to her nomination for Teacher of the Year, Lacroix said, “I continue to inspire equity, to consider that all children have the right to learn in an equitable, sustainable way.”

Last summer Lacroix took on the responsibility of being the grant coordinator for the highly-successful “Inspiring Equity” exhibit, which fostered cultural competence among the community and still hangs in the hallway of Town Hall, Moore said.

Moore noted that she spent the summer talking with people throughout the community as part of the project. “She just has a way with people that makes them want to be honest – kids love her and trust her.”

Lacroix said that she aims to provide her special education students, who are mostly third-graders, with a differentiated learning experience but at the same time one that is inclusive with their regular education peers. “I also go beyond the cognitive skills, and focus on whole children,” she said, including on promoting a safe, loving environment with their families.

Lacroix said she has been teaching for a total of 29 years, with previous experience in Wilbraham and Holyoke, MA. She has a B.S. in elementary education from Westfield State University and an M.S. in special education from American International College.

She has three sons. Quinn and Grayson are in college, and Liam is a student at Conard High School. 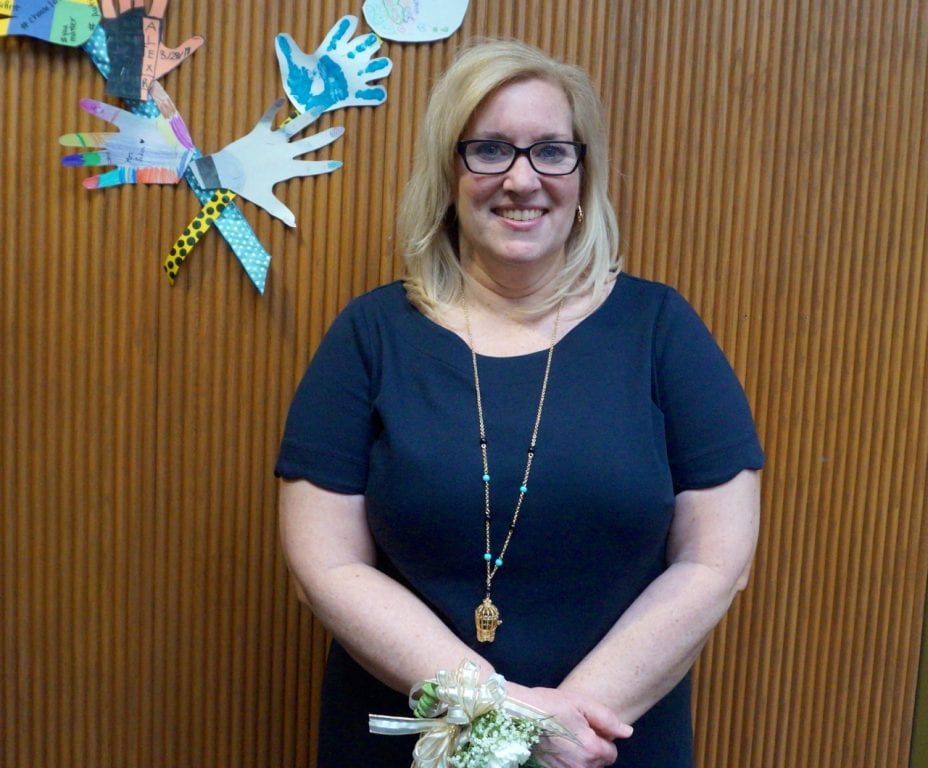 Saraceno is in her 17th year of teaching, with all of her experience at Smith STEM School. “I even student taught there,” she said, while a student at Central Connecticut State University.

“It’s very special because Rebecca is at Smith STEM School and she’s the vocal music teacher at Smith STEM,” Moore told the Board of Education. Coming from that position to being nominated for Teacher of the Year, really shows that we education “not just the mind, but the soul.”

Saraceno said she doesn’t know who nominated her, but said she works extra hard to make sure music is integrated into the curriculum at Smith. “At Smith music doesn’t automatically pop into your head,” she said, but has spoken locally and even nationally at a conference of a national science teacher’s association in Los Angeles last summer about the importance of integrating music into STEM.

“It’s a natural fit,” Saraceno said, and she has been working hard to turn “STEM” into “STEAM,” with the “A” representing the arts. She runs an after school program, which includes dramatic arts as well as music, to develop those skills among the Smith students as well.

Moore also noted that Smith’s choir will be performing at the Hartford Yard Goats game this weekend, and that every December Saraceno organizes the annual cocoa and caroling throughout the Smith neighborhood.

Saraceno is a native of Michigan and has a bachelor’s degree in music (piano performance) from Central Michigan University and a master’s of music in piano pedagogy and piano performance from the University of Michigan. She is expected to earn her sixth-year certificate in educational leadership from CCSU this month.

Saraceno also works as a private piano teacher. She and her husband live in Farmington and have two high school-age daughters. 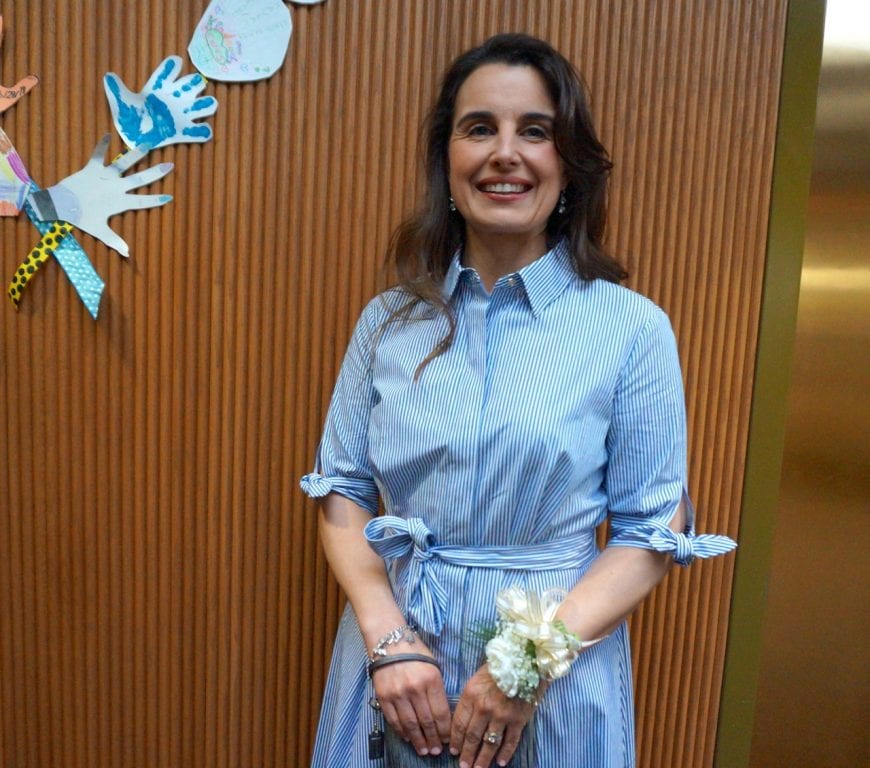 When asked why she thought she was nominated for Teacher of the Year, Stemmer responded, “Honestly I think it’s that I have really great students. I’m in my 20th year of teaching and the students make it easy. They’re incredibly endearing.”

Stemmer teaches eighth grade language arts and is a team leader at Sedgwick, and said she loves the middle school age. “Every day is different, an adventure. They are still innocent enough to be kids,” she said, adding that the middle school sense of humor has grown on her.

Recently she’s been working on an interview project with her students, requiring them to meet someone new on their team modeled after a “What Unites Us” project that the Washington Post did. She’s collaborating with the school media specialist and a science teacher on the team project that culminates with an e-book.

Stemmer started teaching in West Hartford in August 2012, as a language arts teacher and program facilitator for the Alternative Individualized Middle School Program, and had previous experience in Bristol and Waterbury. In addition to English, she has taught theater, and in an alternative school, adult education, and special education.

“Sonya is in every way, shape, and form a teacher,” Moore said. He still recalls the first sentence of her application: “I consider it s privilege to be a teacher,” but in fact “we are privileged to have her here,” he added.

Another Sedgwick teacher described Stemmer as someone who “connects with kids who don’t usually connect with school,” and said she is an inspiration to all of us and we are lucky to have her.”

Stemmer has a B.A. in English with a minor in theatre arts from Rosemont College and an M.S. in educational leadership from the University of Scranton.

Stemmer and her husband, Frank, and their three children (ages 8-16) live in Bristol.

West Hartford’s Teacher of the Year will be announced on May 31, 2018, Moore said.