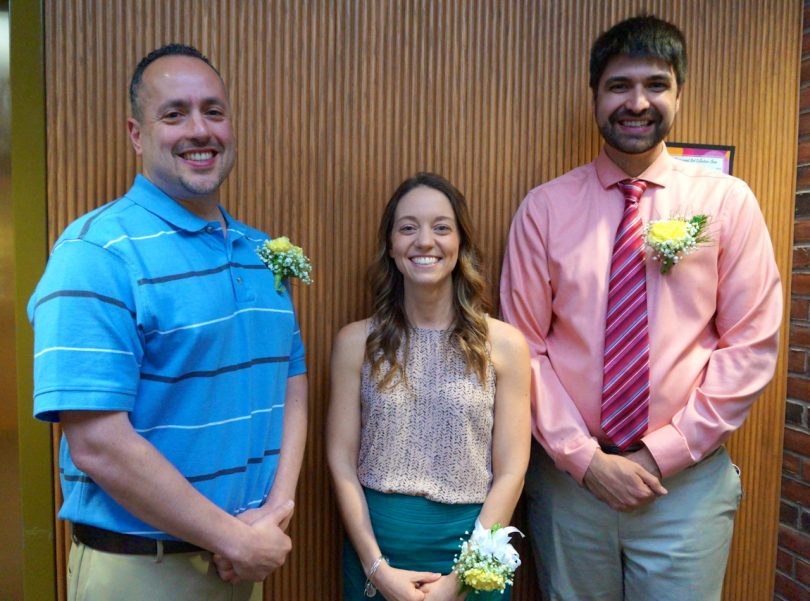 This year’s finalists include an elementary school social worker and a middle and high school teacher from West Hartford Public Schools.

Three candidates who have been named finalists for West Hartford 2017 Teacher of the Year were recognized at a reception Tuesday evening just before the formal announcement was made at the Board of Education meeting.

This is the first time any of the three have been nominated and have gone through the rigorous process that includes an essay, recommendations, a videotaped lesson, and an interview by the Teacher of the Year committee. 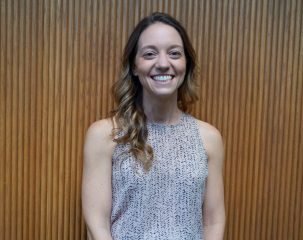 Matway started teaching social studies at Sedgwick Middle School, and according to Superintendent of Schools Tom Moore she was the first teacher he ever hired.

For the past two years, in addition to teaching she has been a sixth grade team leader.

“I am very enthusiastic about everything, and I think that shines through in my willingness to do new things. That’s the one quality that stands out,” Matway said when asked about what may have led to her nomination for Teacher of the Year.

Matway started the WEB (Where Everyone Belongs) orientation program at Sedgwick last year – carrying over her enthusiasm to a group of 60 eighth graders whom she trained to assist incoming sixth graders who arrived for a “giant orientation” two days before school last August.

“The first day is terrifying for sixth graders. It makes a world of difference, and they loved knowing eighth graders in advance – which is a big deal,” said Matway, who recalled her own experience as an orientation leader in college.

Matway’s other roles and achievements include serving as an advisory coordinator, member of the Curriculum Writing Team, and member of the Sedgwick Technology Committee. She received a Foundation for West Hartford Public Schools grant for “GPS: Geography Promotes Success” in 2009, and in 2016 was an International Dance Challenge award recipient.

Matway began her employment with West Hartford Public Schools in 2006, and has been at Sedgwick for her entire career.

Matway lives with her husband and 3-year old daughter, Cora, in Rocky Hill. 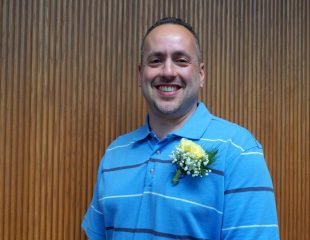 Ramirez, who has been a social worker at Smith STEM School since 2010, said that he’s “humbled and honored” to be a Teacher of the Year finalist.

“It’s a great honor for our department – to recognize the support staff for the school’s needs,” Ramirez said.

“I’m very blessed and fortunate to work with wonderful administrators,” Ramirez said. He said that the administration, as well as the school psychologist and special ed teachers, are especially supportive of his work with students and their families.

In his role, Ramirez has been instrumental in a variety of successful programs, including Gifts of Love and Holiday Helpers. He’s also a site coordinator for the West Hartford Mentor Program.

Ramirez has been recognized for his role in building partnerships, connections, and a sense of community to ensure student success, as well as for his strong clinical skills.

Before moving to Smith STEM, Ramirez was a social worker at King Philip Middle School and in the STRIVE Program, but although his background is in mental health, he didn’t begin his career working in the schools.

Ramirez worked a counselor with The Bridge Family Center from 2003-2008, an experience which he said “was a great stepping stone” to what he does today. He also previously worked at the Institute of Living in Hartford and Grace S. Webb School in Cheshire and was a member of the U.S. Army Reserve from 1989-1995.

Ramirez, who lives in Berlin, holds a B.S. in education and a Masters of Social Work from the University of Connecticut. 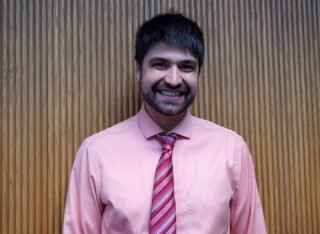 Wasley has worked for the West Hartford Public Schools since 2010, and currently teaches honors earth science and marine science at Hall High School. He previously taught eighth grade science at King Philip Middle School (2011-2013), and in his first year taught earth science at both Conard and Hall.

“It feels really good, Wasley said about being a Teacher of the Year finalist. My colleagues have have said, ‘This is the year of the Waz,'” using the name that many call him, and noting many of the other exciting things that have been happening in his life lately, including the birth of his first child in March.

Wasley said that his method of teaching is very student-centered, not teacher-centered. “Rather than me telling them something, they create scenarios to discuss science, and form their own authentic memories.”

Wasley has been chosen as the faculty speaker by the Class of 2017, and he has taught many of the same students at multiple grade levels – beginning when they were eighth graders at KP, to freshmen at Hall, and now as seniors in marine science.

Marine science isn’t a new class at Hall, but Wasley said he has reinvented it. A Foundation for West Hartford Public Schools “Hall High School Coral Project” grant has helped Wasley and his students build and set up a 90-gallon coral reef aquarium that is used in the curriculum.

Marine science is a “flipped” class, Wasley said, where students learn lesson material from his YouTube channel and then work on labs in class. He said he prefers to work with live animals rather than having the students do dissections.

Wasley has a B.S. in environmental science from the University of Connecticut and an M.A. in teaching from Central Connecticut State University. He formerly worked as an instructor/outdoor teacher for Project Oceanology from 2008-11.

Wasley’s wife teaches English in New Haven, and they currently live in Plainville but hope to one day both teach and live in West Hartford.

West Hartford’s Teacher of the Year will be announced on May 18, 2017.