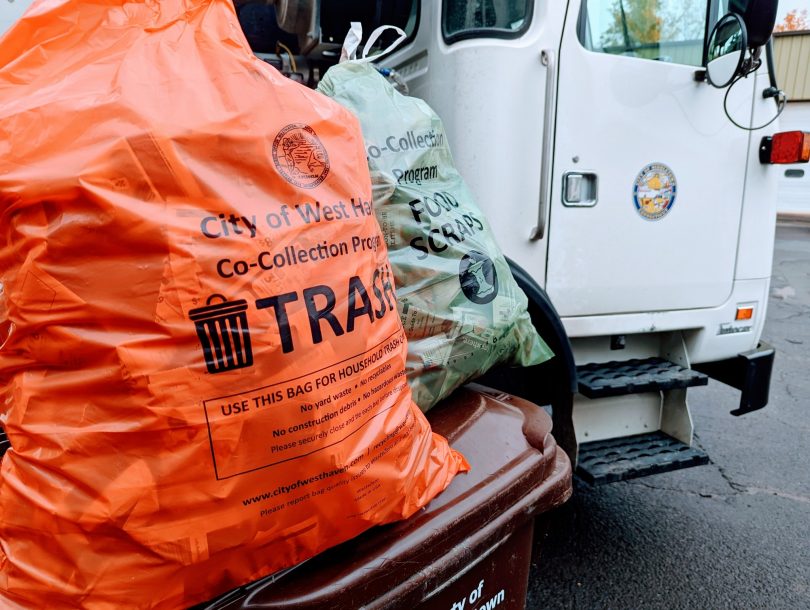 Special bags, like this being used in West Haven, will be distributed to West Hartford residents in the pilot program. Courtesy of DEEP (we-ha.com file photo)

West Hartford has been chosen as one of 15 recipients in the Connecticut Department of Energy and Environmental Protections’s Sustainable Materials Management Grant program and has identified a neighborhood where a pilot program will be implemented. 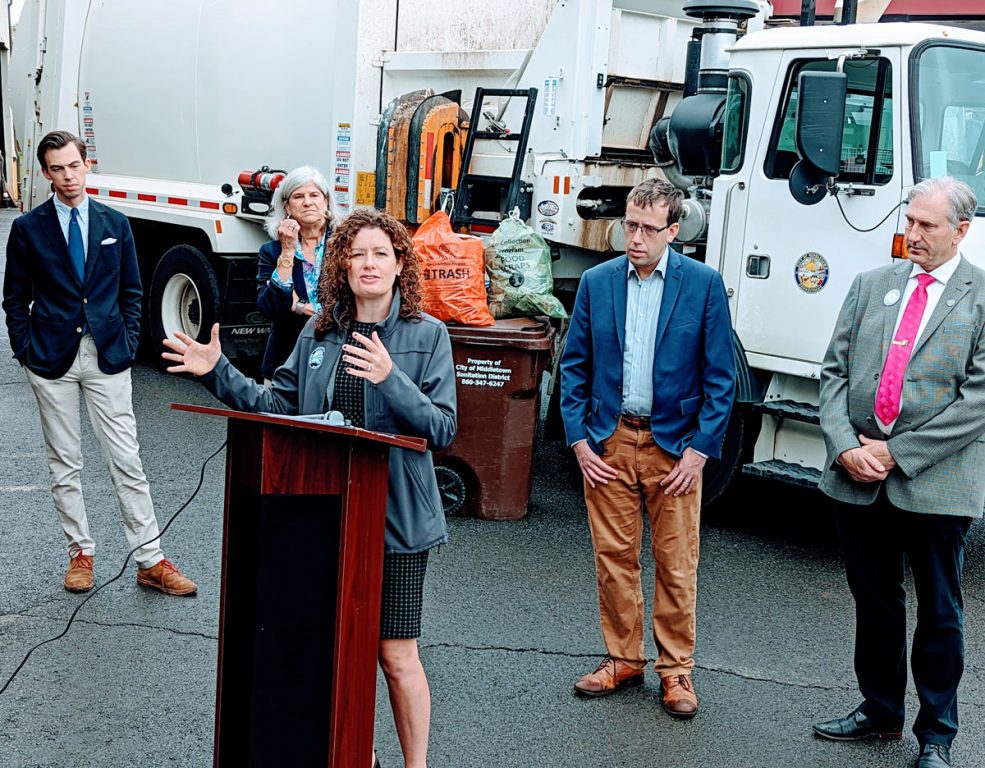 Katie Dykes, commissioner of the Department of Energy and Environmental Protection, speaks at the announcement of the grant program. Courtesy of DEEP

The Town of West Hartford will be launching a pilot program early next year involving nearly 700 homes where residents will be asked to separate their food scraps from their trash in order to develop data about the impact the diversion can have on reducing the total amount of household waste.

“We’ve been working on this for a while,” West Hartford Department of Public Works Director John Phillips said. He said he’s glad to have the grant finalized and and will be working on the next steps, which include creating a “playbook” for the rollout.

The pilot in West Hartford will be funded by a grant of $106,200. The town is one of 15 municipalities and three regional groups in Connecticut to receive a funding for a pilot announced by the state’s Department of Energy and Environmental Protection (DEEP) as part of the first round of awards from the Sustainable Materials Management (SMM) Grant program. That program is looking to pilot programs in food scrap collection as well as unit-based pricing in order to increase waste diversion as recommended by the statewide Connecticut Coalition for Sustainable Materials Management (CCSMM).

CCSMM’s mission, according to its website, is “to explore ways to reduce the amount of waste that is generated in our state, improve reuse, recycling, organics collection, support EPR legislation, and consider other innovative solutions.” 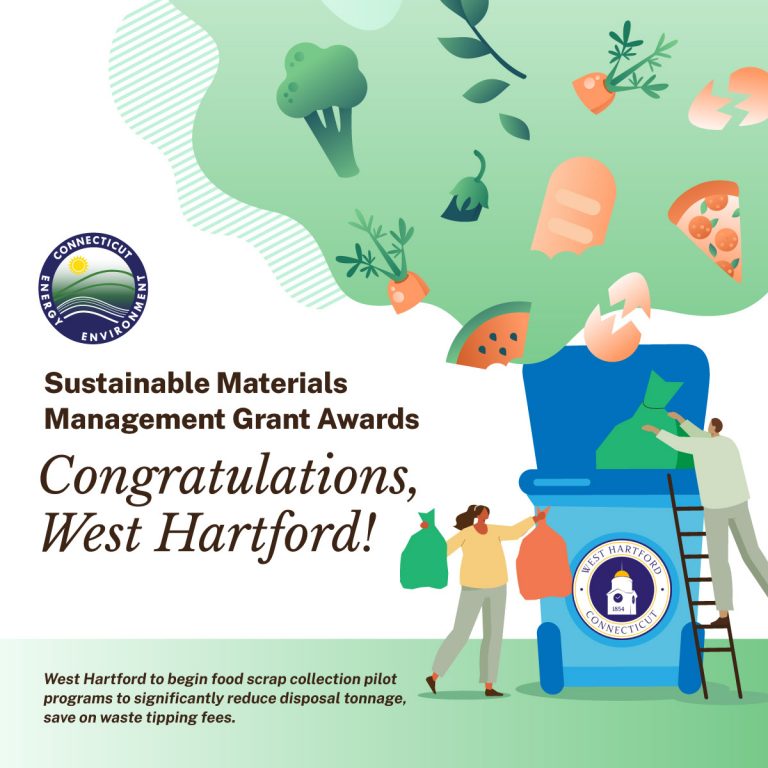 Phillips said that Katherine Bruns, the town’s recycling coordinator, will be finalizing the details along with the program manager from WasteZero, and then a resolution and contract will be brought to the Town Council for approval by the end of the year.

The pilot program will run for nine months, and will likely begin sometime around mid March to late March. Phillips said he doesn’t want to begin the program in the winter, and wants to have the opportunity to have everything in place – including special bags and food scrap containers – and educate the households that will be involved.

Trucks from Paine’s – the company that already hauls the town’s trash and recycling – will be collecting the special 5-gallon food scrap containers at the curb, and for ease of collection a neighborhood near Morley Elementary School with a grid pattern has been chosen for the pilot. All homes in the area bounded by Trout Brook Drive to the west, North Quaker Lane to the east, Fern Street to the south, and Asylum Avenue to the north, will be included in the pilot. Phillips said the town wanted roughly 700 residences in the pilot program, and the total number of homes in this area totals 690.

“It’s a well-connected community,” Phillips added, which is also valuable to the pilot as neighbors will share their opinions – favorable as well as unfavorable – with each other, and that type of feedback is important.

“It’s also quite visible,” Bruns said of the neighborhood chosen for the pilot. Many of the streets involved are major arteries, and drivers as well as pedestrians will see the pilot in action which will help awareness.

After being collected by Paine’s, the food scraps will be brought to Quantum Biopower in Southington where the material will be turned into energy.

Other communities around the state that have received grants are launching the grant-based pilots differently. Bruns said that some municipalities are doing just food scrap collection, others are testing a unit-based approach, some, like West Haven, are doing a co-collection of materials.

In West Hartford, “the pilot will be centered around food waste diversion but we are also introducing unit-based pricing,” Phillips said, in order to produce data about the volume of trash that is produced when food waste is separated.

The units being measured will be the number of bags used. While it’s technically possible to weigh each household’s trash, Phillips said, the technology is not currently advanced enough for that to be a practical solution because it’s based on hydraulics and would require the truck to be stopped for a much longer period of time at each house. Routes would take much longer, and additional trucks might also be required.

If anyone in the community knows of a better unit of measurement, Phillips said he is definitely open to alternatives.

There will be no cost to anyone involved in the pilot, and households will be given green bags in which to place their food waste – that will then be placed at the curb in the special 5-gallon container that will be collected by Paine’s through a manual process. Participants will be given orange bags for trash, and those will be placed into existing green (or pink) Paine’s barrels.

With the ultimate goal of reducing the volume of trash, Phillips believes it’s important to think outside the box and also pilot unit-based pricing. By diverting food scraps and then looking at the week-to-week volume of remaining trash the pilot will produce valuable data about the impact. “You should pay for what you throw away,” he said, just like people pay for utilities based on usage.

Connecticut is well-positioned to process organic waste, Phillips said, not just food scraps. “It makes no sense to be sending it out of state,” he said, to landfills or to be burned. “There will be real environmental impact with this.”

“Our state needs new approaches for waste management that address cost and environmental concerns,” said state Sen. Derek Slap said. “This pilot program for composing and processing food scraps can reduce the cost of waste disposal while reducing amounts of actual waste created by residents. I’m looking forward to seeing the results of the program and hope it can be expanded if it is successful.”

In the month prior to the launch, Bruns and others will go door-to-door in the pilot neighborhood to ensure that the community is educated and to hand out bags and provide information about an app that can be downloaded. Volunteers would be welcomed to assist with the educational effort, and email her at [email protected] if you are interested.

“You’re already taking your trash to the curb,” Bruns said. “This is just in separate containers.”

“We are excited to support our municipal partners implementing innovative waste diversion practices that can reduce their waste management costs and the environmental impact of waste management in Connecticut and beyond,” DEEP Commissioner Katie Dykes said in a statement. “The municipalities piloting these programs will lead the state in modernizing our waste management practices, a key to solving the state’s waste disposal crisis. I’m grateful to Governor Lamont and the Connecticut General Assembly for authorizing funding for this unprecedented investment in sustainable waste solutions.”

A news release from DEEP noted that “according to Connecticut’s most recent waste characterization study, 41% of what residents throw away is organic material – e.g., food scraps, and yard waste – that can be composted, converted to energy through anaerobic digestion or processed into animal feed. Food scraps alone represent 22% of residential trash. Food scraps are one of the heavier materials regularly thrown away at the residential level and removing them from the waste stream reduces the costs of disposal as municipalities pay by weight.”

Diverting food scraps is the “low hanging fruit,” Bruns said, and will support the effort to have greater resiliency in waste management.

“The results of the pilot will dictate if we go to the next step,” Phillips said.