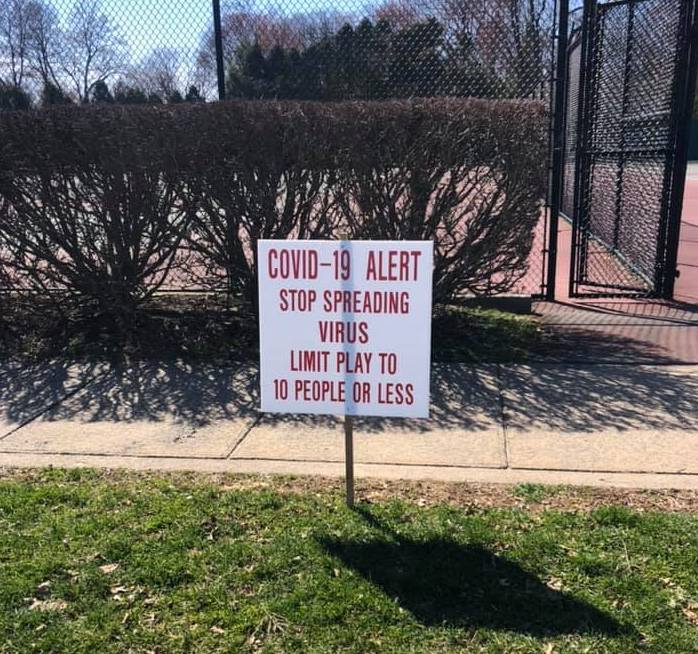 A sign in front of the tennis courts at Conard High School on March 25 requested that those who use the courts follow social distancing guidelines. The courts were closed completely as of April 1, but some will reopen May 22. (We-Ha.com file photo)

Playscapes will remain closed as will pools, tracks, and basketball courts, but summer camp options are being considered. 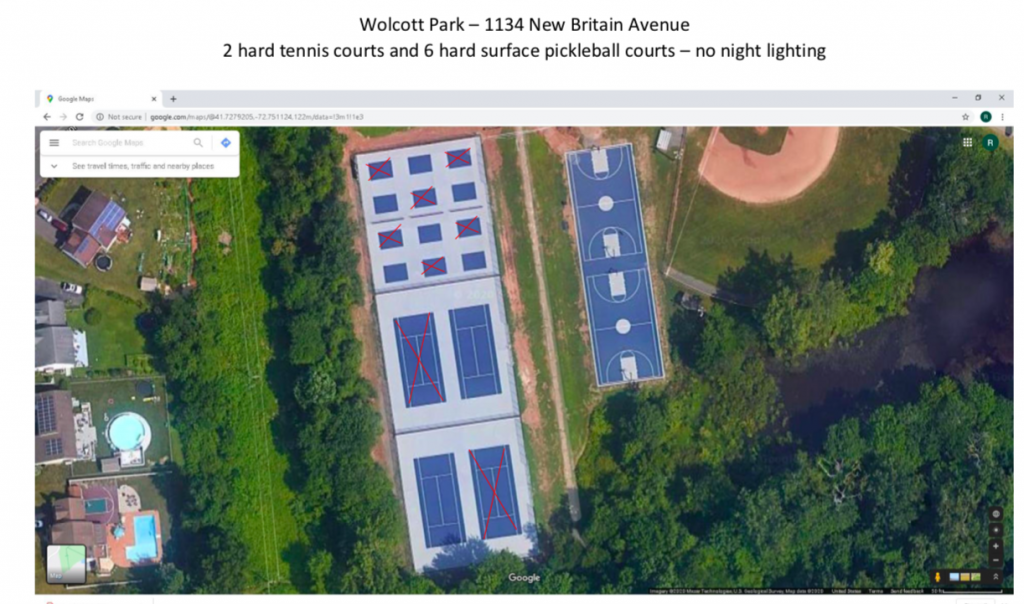 Town officials and staff discussed outdoor recreation and other leisure and social services activities at the first meeting of the Town Council’s newly-formed Special Advisory Committee for Social and Community Recovery. Town Councilor Liam Sweeney is chair of the committee, which also includes Councilors Mary Fay and Carol Blanks. Mayor Shari Cantor and other Council members also participated in the meeting, which was held as a WebEx/Facebook Live event and also broadcast on West Hartford Community interactive’s YouTube channel.

Director of Leisure and Social Services Helen Rubino-Turco briefed the Special Advisory Committee about recreation activities, and noted that tennis and pickleball are considered low risk sports, and according to Gov. Ned Lamont are now permitted to reopen. Golf courses are also permitted to be open, and West Hartford opened Rockledge and Buena Vista on May 10.

There are “a lot of safety protocols in place and that has gone very, very well,” Rubino-Turco said regarding the golf courses. 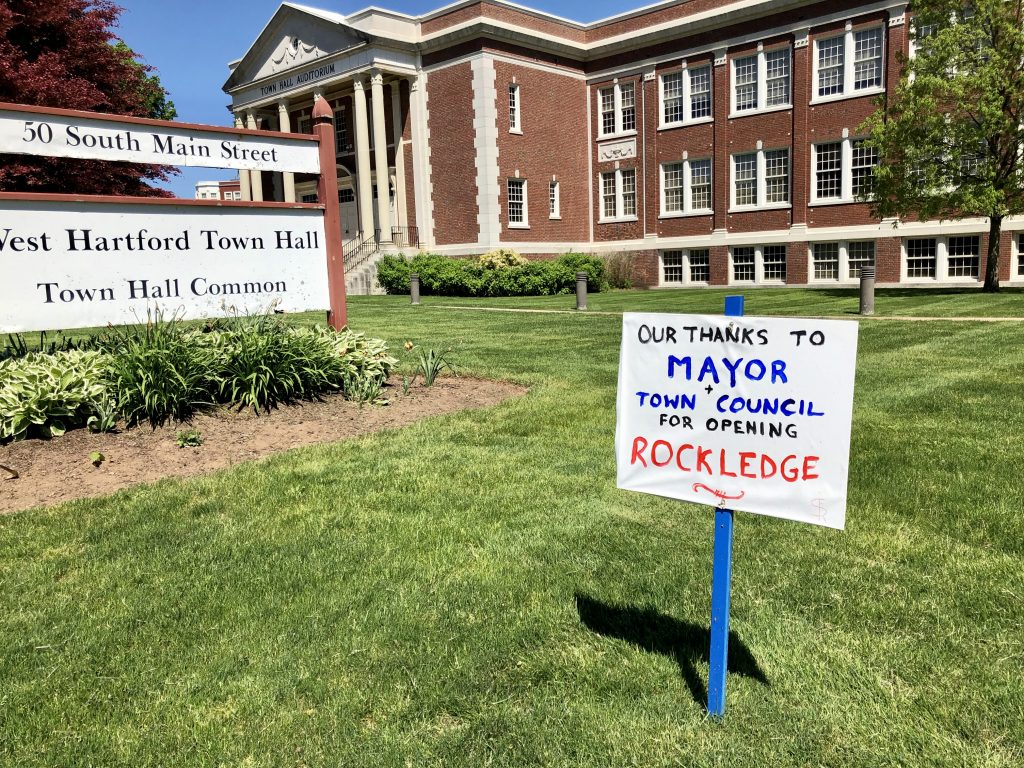 A sign on the lawn of West Hartford Town Hall thanks the mayor and Town Council for reopening the Rockledge Golf Club. Photo credit: Ronni Newton

According to town staff, effective Friday, May 22, 50% of the town’s available tennis and pickleball courts, which closed on April 1, will become available for use. The number of courts at any one location is being limited “so that participants can properly maintain social distancing,” Lisa Michaud and Robert Palmer, co-chairs of the Municipal Operations Recovery Section, said a letter to the town’s executive team dated May 15.

Nets will be in place only on those courts that are available for use, and gates will be locked in the open position to minimize contact with what would otherwise be high-touch areas.

The guidelines for the reopening of the courts were developed based on and in consultation with federal, state, and local government agencies as well as the United State Tennis Association (USTA). Other municipalities that have reopened similar facilities were also consulted.

There will be two hard courts available at Buena Vista, six at Conard High School, one at Fernridge Park, six at Hall High Scholastic’s, and two tennis courts plus six pickleball courts opening at Wolcott Park.

There will not be any lighting available in the initial stage of reopening, and the Har-Tru courts at Fernridge Park, which require maintenance, will not yet be available, Leisure Services Manager Marc Blanchfield told the Advisory Committee Wednesday night.

“It’s important for people to observe the rules and to do the right thing,” Hart said.

Player guidelines, which can be viewed as a PDF below, will be posted at each court entrance “help to ensure that proper social distancing and hygiene procedures are observed for player safety.”

Full details of the arrangement of the open courts can also be found in the PDF below.

Tracks, playing fields for organized sports, splash pads, indoor and outdoor pools, and basketball not on list of approved activity by the state until at least June 20, Rubino-Turco said. Playscapes have also not been cleared for reopening by the governor.

The state has required pools to be closed, and Rubino-Turco said perhaps any plans to open them this summer can be discussed at the Special Advisory Committee’s next meeting, which will be June 1 at 6 p.m. Splash pads – which would ordinarily open Memorial Day Weekend – are considered to be in the same category as pools from a public health standpoint, and there are also issues regarding control of crowds and multiple touch points, so those will remain closed as well.

If pools are to open at some point this summer, Rubino-Turco said Wednesday that there would need to be two to three weeks notice required to prepare, increased staffing for crowd control, and funding made available.

Cornerstone will also remain closed until at least June 20, she said.

While no decision is being made at this time, the Special Advisory Committee also received a briefing from Rubino-Turco and Elmwood Community Center Director Jamie Krajewski regarding summer day camps, which are permitted by the state to open as of June 22.

The town recently announced cancellation of many of its regular camps, such as Camp Funtastic, because they cannot be run “as advertised,” Rubino-Turco said, and staff determined that it was better to offer full refunds and then come up with other options that are viable. “In the spirit of ‘yes we can.’ and in the spirit of problem solvers we do have some ideas,” she said.

The town camps have typically served 265-270 children per week.

Krajewski said she has been working on a plan for two separate camps at the Elmwood Community Center, one for children ages 3-5 and another for children ages 6-12, with space for a total of 60 children per week. The programs, if implemented, would require “valet” drop-off, daily temperature checks, and separation of children into groups of no more than 10 with two dedicated counselors for each “pod.” Other strict procedures would also be in place.

Camps must have indoor facilities available for weather-related shelter, and in addition to the Elmwood Community Center, Rubino-Turco said there could also be space for 30 to attend camp at Westmoor Park. Use of school buildings is also a possibility and has been approved by the Board of Education.

Based on guidance from the state’s Office of Early Childhood, permissible day camps must be long enough in duration to require a meal break, essentially to be considered childcare rather than an enrichment program. Meals are not required to be served, however.

Rich Mabee, a longtime camp program director in West Hartford, expressed concerns about putting campers and counselors on the frontlines, and Rubino-Turco said that other nearby towns – Manchester, Newington, Rocky Hill, Wethersfield, and Berlin – have all canceled their camps for this summer.

While Leisure Services could run virtual programs, they would require time spent in front of a screen and could not serve as childcare options.

There are risks to opening camps, Rubino-Turco said, and staff will look to the Town Council as well as the West Hartford-Bloomfield Health District for guidance.

Senior Centers are not able to open and may not be until the end of the summer, but continue to run virtual programs.

The West Hartford Libraries, which have been running a robust schedule of virtual programs, will begin offering curbside service, Director Martha Church said. Patrons will reserve books online or by phone, and library staff, wearing masks and gloves, will provide no-contact drop off at their cars.

Church said she has targeted the commencement of the service for June 8, and will begin with providing materials that have been on hold since the library building closed in March.

The date for the reopening of the library buildings has not yet been determined by the state, but Church said it may happen at the same time as schools. 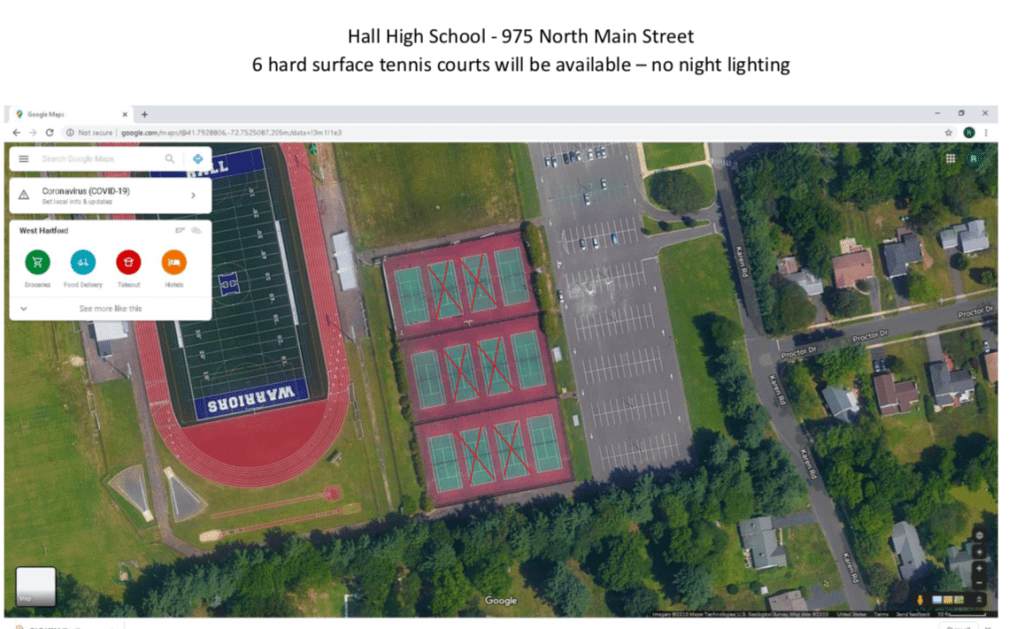