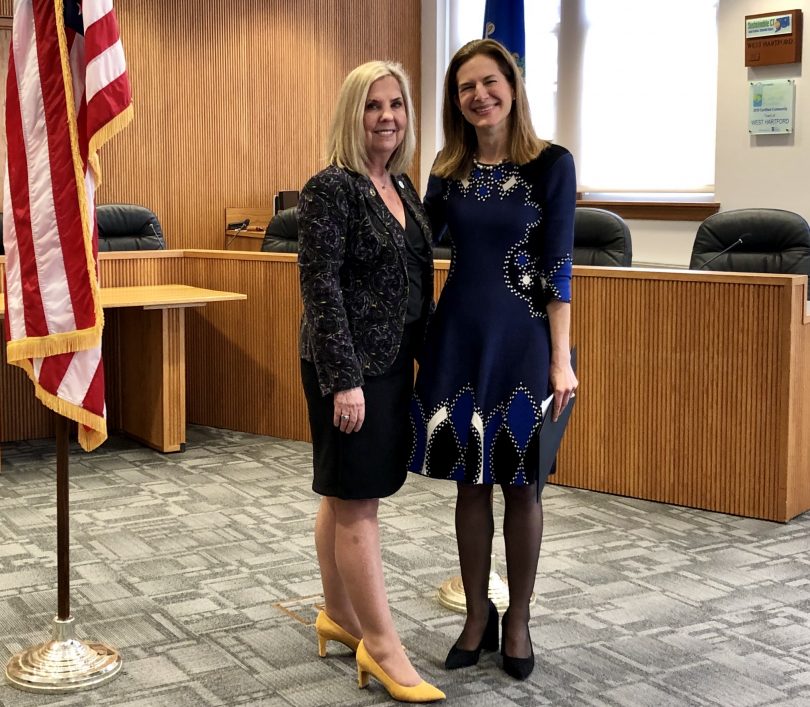 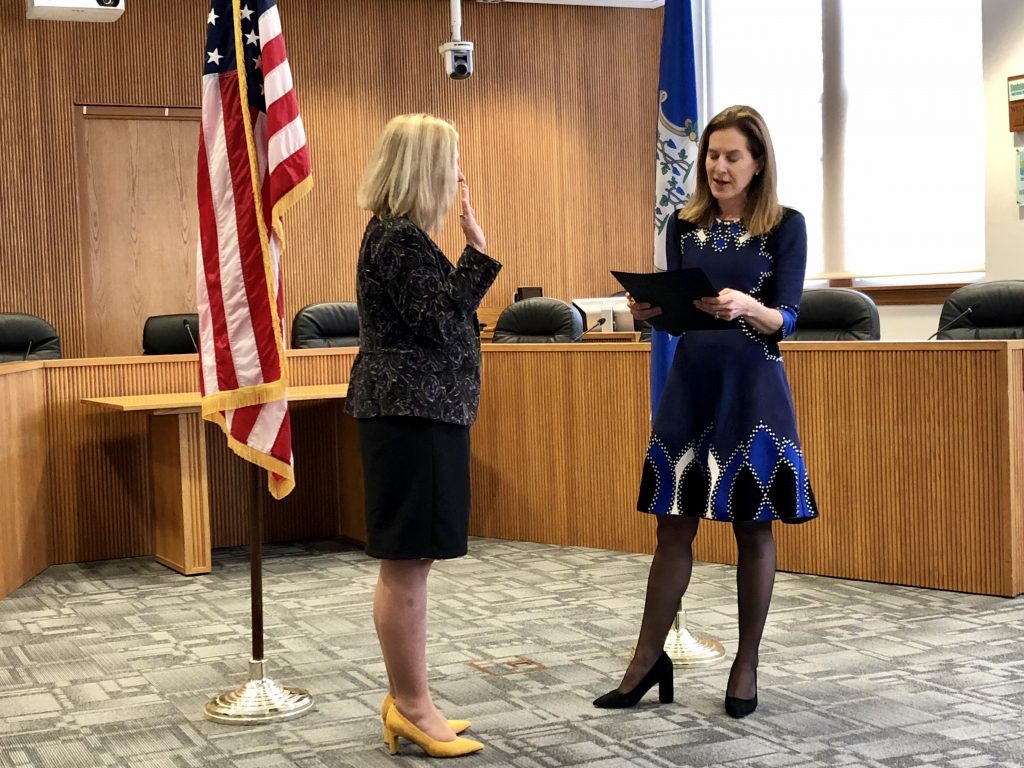 As she was sworn in for her third term Monday, Town Clerk Essie Labrot, who has received numerous accolades during her tenure, credited current and former staff members as the dedicated “unsung heroes” who have made the West Hartford Town Clerk’s Office a great place over the past 12 years.

Lt. Gov. Susan Bysiewicz was in town Monday afternoon overseeing the swearing in ceremony of Labrot, who who was re-elected in November 2019 for her third four-year term.

Bysiewicz said she was pleased that this was the second time she has handled the swearing in of Labrot, who was first elected in 2007 and began her tenure in January 2008.

“I had the the pleasure of swearing her in as town clerk in 2008 as secretary of state, and now as lieutenant governor, and I have had the great pleasure of working with her,” Bysiewicz said.

“Thank you for your support, because you have really let our office grow in the way that it needed to grow, at a time when it needed to grow,” Labrot said to West Hartford town staff and elected officials who attended the ceremony.

The swearing in was also attended by Labrot’s family and friends as well as town clerks and town managers from several other municipalities.

The town clerk is really the chief information officer of a town, said Bysiewicz, and Labrot is a “terrific CIO” in her handling of land records as well as the election process.

“Essie is a leader in the the Town Clerk Association in the state of Connecticut, and the fact that town clerks from New Britain, Waterbury, Glastonbury, and Newington attended the swearing in speaks to the esteem her colleagues hold her in,” Bysiewicz said.

Bysiewicz praised Labrot for advocating for change to make it easier for people to vote and to make the election process more secure, and noted that she is a respected voice on the state level.

At the end of the ceremony, Labrot was gifted a trophy, engraved with the words “Queen of the Absentee Ballots,” by Antoinette (Chick) Spinelli, town clerk of Waterbury. Bysiewicz noted that the action “speaks to the gravitas and respect” for Labrot.

“I’m so appreciative of her professionalism and her dedication to West Hartford and her state, and her democracy,” Bysiewicz said.

The Town of West Hartford has won the Democracy Cup seven times – most recently for the 2018 election – and a key factor in the town’s high level of participation has been the number of voters who use absentee ballots.

Labrot said she anticipates about 5,000 votes will be cast by absentee ballot in West Hartford for the 2020 presidential election. Greenwich is the only town that sometimes has a higher number of absentee ballot voters, but Labrot noted that it’s a “commuting city” where it would be expected that people who work in New York City may not be able to get to the polls during the time they are open.