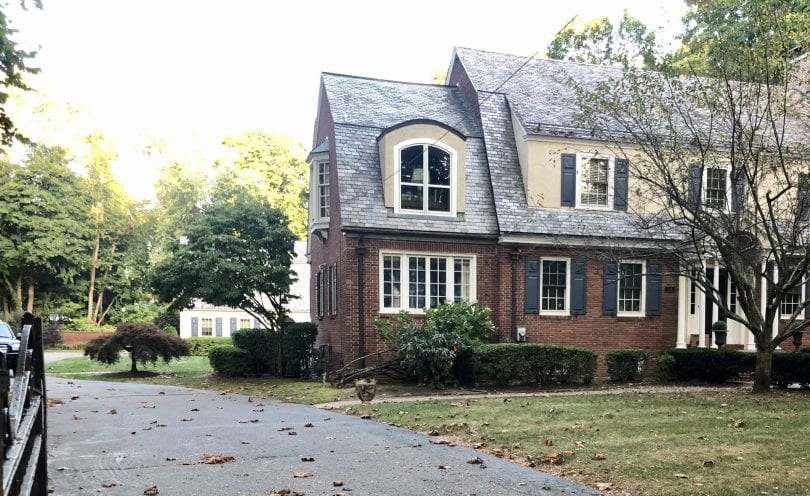 According to Town of West Hartford records, there are only a few dozen Accessory Dwelling Units – such as this guest house behind a larger home – documented in West Hartford. Photo credit: Ronni Newton (we-ha.com)

After years of considerations and extensive rewriting of a proposed ordinance, Accessory Dwelling Units – which some also call granny flats or in-law units, as well as a host of other names – will now be permitted in all single-family residential zones in West Hartford following approval by the Town Council in a 6-3 vote along party lines Tuesday night.

Town Manager Matt Hart, who outlined the ordinance at a public hearing that preceded the Council meeting and again prior to the vote, said that in staff’s opinion, the intent of the zoning change is to promote housing choice; provide a greater range of housing affordability options than currently exist in West Hartford; provide “age-in-place” or “grow-in-place” options for family members; provide additional income streams for property owners, including those who are struggling to hold onto or maintain their homes; and can provide for some (minimal to moderate) grand list growth.

The ordinance will, Hart said, “establish a more equitable approach to provide access to this type of housing for current residents as well as future residents.”

Council member Ben Wenograd has been spearheading the discussion, and ADUs have been under consideration for several years. An ordinance was first proposed in the fall of 2018, Hart said. It was withdrawn for a variety of reasons, he said, and the decision was made to look at the issue of housing more broadly as the town was undergoing an update of its Plan of Conservation and Development (POCD), a process that takes place every 10 years.

After extensive outreach and input from the community, the POCD was adopted in the spring of 2020, and has seven primary goals. “One of those relates to neighborhoods and housing,” Hart said, and specifically identifies ADUs as a tool to broaden the town’s range of housing types and affordability.

ADUs are common throughout the country, Town Planner Todd Dumais said, and even in Connecticut they are permitted in 141 of 169 municipalities. Although banned in some places through zoning several decades ago, there has been a growing movement to promote housing diversity, affordability, and choice, and nationwide new ordinances are being approved, he said.

An ADU ordinance is not a new concept for West Hartford, said Dumais, “just refining something we have had on the books for more than 50 years.”

West Hartford’s zoning had previously permitted ADUs, but only on lots double the size of what is required in that particular zone. In addition, the prior ordinance wording stated: “No accessory building on the same lot with a main residence building shall be used for residence purposes, except for guests or for domestic employees of the owners or tenants of the main building and who are employed on the premises, provided that such accessory building contains no kitchen facilities.”

While they may not meet the parameters of the new ordinance, there are currently at least several dozen ADUs in town, and likely more that have not come to the attention of the assessor’s office or building department.

Restrictions on ADUs remain under the ordinance passed Tuesday night, and require that the structure be at least 400 square feet but not more than 800 square feet or 30% of the square footage of the principal dwelling unit, whichever is less.

In addition to being freestanding structures, ADUs can be carved out of or attached to existing dwellings, but must not increase the footprint by more than 30% and if constructed in a basement must have grade level access on at least one side, with a door as well as windows.

One off-street parking space must be available for the ADU, site plans must be approved by the town, and either the unit or the principal dwelling must be owner-occupied according to the new ordinance, which can be viewed in its entirety in the PDF below.

Mayor Shari Cantor thanked Wenograd for his work on the ADU ordinance and said he “showed a lot of perseverance in getting us over the goal line.” ADUs have become a national trend, Cantor said, and she believes this is “an important step for West Hartford to take.”

“At long last we finally have an opportunity tonight to decide whether or not we want to maintain what has been an effective ban on ADUs,” Wenograd said, removing highly restrictive provisions of the previous ordinance. “I’m confident that the ordinance strikes a good balance between the rights of the homeowner to make improvements to their own property, the public good of such improvements in terms of tax revenue, stability, and diversification of housing options, and the very limited and speculative impact such an improvement might have on neighbors,” he said.

Wenograd’s interest in the topic was sparked because his mother used to rent out a room in their West Hartford home for additional income, which was legal because there was no separate kitchen. Some of her friends, however, had illegal units with kitchens in their homes that they also rented out.

He first brought up ADUs in 2017, and the Town Plan and Zoning Commission struck it down unanimously. The ordinance passed Tuesday was greatly modified from that first proposal.

“This has been one of the more researched and debated issues of this body,” Wenograd said. While it likely will be just a small step in increasing affordable housing, “it is low-hanging fruit,” he said, and will provide opportunities not just for seniors, but for adult children with disabilities, recent graduates, and others to have a safe and affordable place to live.

“This will not discourage home ownership,” said Council member Beth Kerrigan, adding that she would have paid more for a home if it had an ADU, which could have provided a good option for several of her family members.

Liam Sweeney said that West Hartford has one of the largest community of intellectually disabled individuals in the state, and ADUs could fill an important housing need.

Chris Williams, who along with Republicans Lee Gold and Mary Fay voted against the ordinance, said his decision was for philosophical reasons. He expressed concern that the ordinance “overnight turns single-family zoned properties into potentially multifamily properties.”

Williams also said he “doesn’t think we have a lack of diverse housing stock to justify a policy like this.”

Cantor said that through the creation of the current POCD, and with extensive input from the community, “there was significant feedback in supporting further housing options.”

They will be an option for disabled adults who are unable to be in completely independent living arrangements. “The ADUs can also be made ADA compatible in a way that a regular home may not be retrofit,” she said.

Building an ADU is not inexpensive. “This is a commitment,” Cantor said, “but to have an option is important.”

A half dozen people spoke at the public hearing and others submitted letters to the Council that were read into the record during the public hearing on ADUs, with all but two favoring the ordinance and a few asking for the easing of even more restrictions.

Alan Ruiz said ADUs “tend to enhance the character of neighborhoods and provide citizens of towns to be flexible in the housing choices available to them,” and also provide the opportunity for a source of income.

Jay Stange also expressed his support for ADUs as a way to support sustainability, but asked the Council to consider removing the parking space requirement. “I think anything we do to discourage investment is a mistake,” he said.

Rick Bush asked if the town would consider amending the size requirement for ADUs for those with larger lots. “This favors larger houses and doesn’t take into account lot size,” he said, noting that although he has an acre of lane, he would only be able to build a 570 square foot ADU because his house is 1,900 square feet.

Luke Reynolds said ADUs could help make the town a more “inclusive and affordable place to live,” and offer an alternative to living in a big city for young people.

Shawn Daly spoke out against ADUs, stating that there is already an abundance of homes for sale in West Hartford and soon will be more as seniors turn over their properties. He expressed concern about the potential environmental impact of ADUs and the possibility that they could become illegal Airbnbs, and stated that they would not improve neighborhoods. “Home ownership continues to be a proven method for building wealth over renting,” Daly said.

“Today, more and more families are looking to help their elder family members with affordable housing by keeping them out of assisted living or nursing homes,” wrote Carolyn Darr, noting that the ability to have an ADU could provide an affordable option for family members while allowing them to live nearby. “Seniors are an important part of the community, assisting their family with child care, and filling numerous volunteer positions. Yet the cost of maintaining a single-family residence in West Hartford is becoming too costly for many seniors and they opt to move to another town or move out of the state.”

Mark Merritt wrote that he thought ADUs were “bad policy decision” that could negatively affect town services. “The current proposal does not identify a need we have in town to expand the current policy nor does it address the negative impact on our neighborhoods,” he wrote.

Cantor, who was the last to speak before the Council voted, said she doesn’t think ADUs will be a drain on resources, and usually it would be just one person living in the unit. In addition, she said, it’s an infill development of unused land.

“We need to give our homeowners options so they can keep up their homes. … flexibility for families as they change and age,” said Cantor. While it’s not a silver bullet, it’s “a really low hanging fruit.”