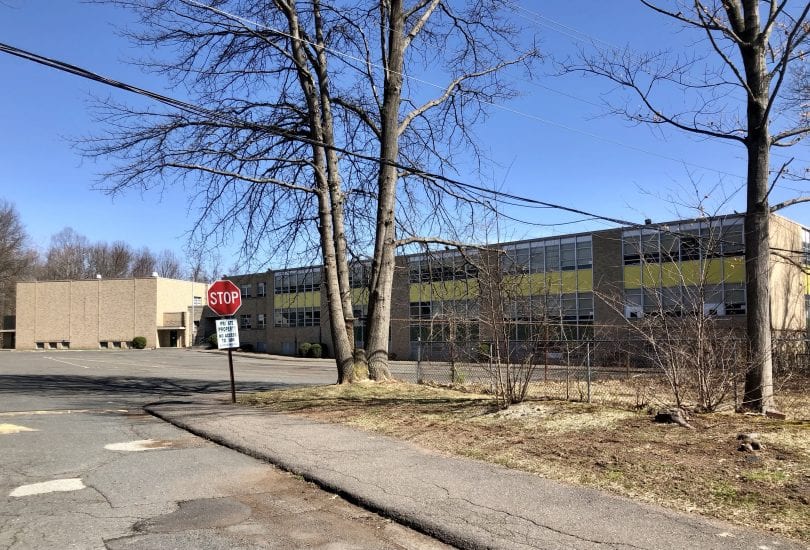 The Town of West Hartford will be taking ownership of the former St. Brigid School property at 100 Mayflower St. later this summer following a 6-2 vote by the Town Council Tuesday.

Citing the strategic location of the vacant St. Brigid School property and the ability to not just meet a current need but also fulfill a vision for the future, and following the completion of due diligence, the West Hartford Town Council voted Tuesday night in favor of purchasing the 8.5-acre parcel at 100 Mayflower Street for $3 million.

“I’m really excited about this,” Town Manager Matt Hart told We-Ha.com. “I think this is a once-in-a-generation opportunity,” he said, noting that he is very thankful to the Archdiocese of Hartford and the Saint Gianna (Beretta Molla) Parish Corporation for trusting in the town and providing the time for assessment of the property to be completed.

The town became interested in the property for multiple reasons, including its location adjacent to Beachland Park and the opportunity to construct a more sustainable and energy efficient building for current programming that takes place at the 100-year-old Elmwood Community Center building and Faxon Branch Library, as well as for future needs.

In addition to expanding and enhancing programs and services for seniors and teens, the site could provide the opportunity for space for a cultural center for the town. 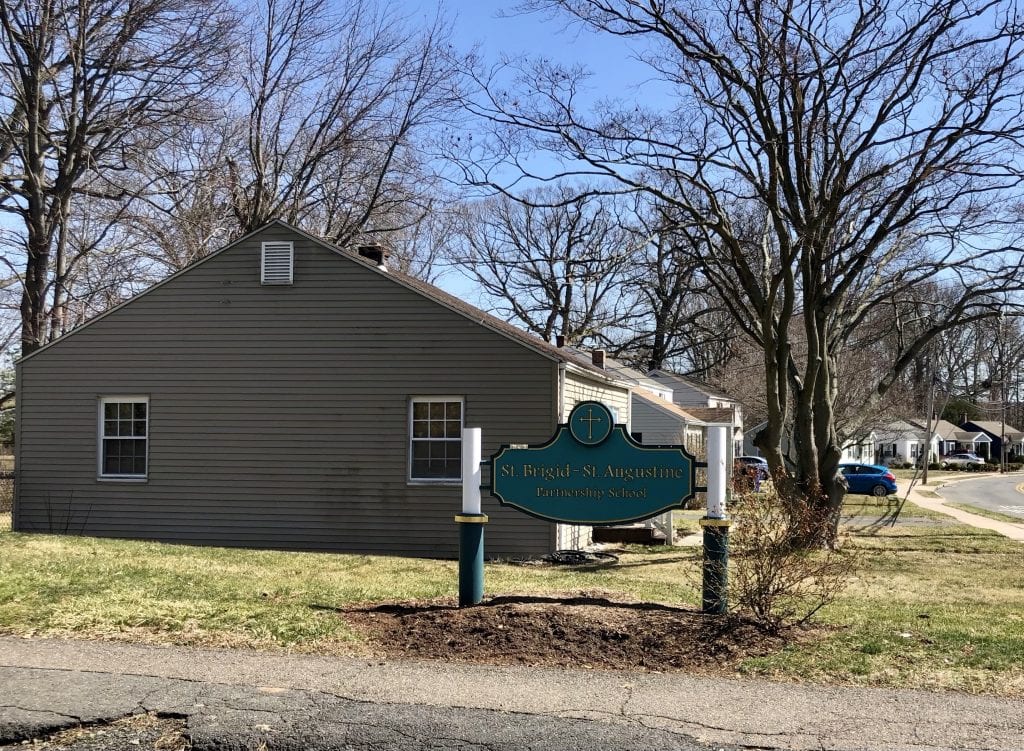 The vote was 6-2 Tuesday in support of a resolution to acquire the property. Mayor Shari Cantor, Deputy Mayor Leon Davidoff, and Democrats Liam Sweeney, Ben Wenograd, and Carol Anderson Blanks voted in favor, as did Lee Gold, who is currently unaffiliated. Republicans Mary Fay and Chris Williams voted against the purchase, and Democrat Beth Kerrigan, was absent from the meeting.

The Council had voted 6-2 (Fay and Williams opposed) on March 23, 2021 to enter into a contract for the purchase, subject to the results of the due diligence, which included an evaluation of the mechanical, electrical, and plumbing systems – as well as an examination of the structural integrity of the roughly 46,000 square foot school building that was constructed in 1960-61. A hazardous building materials investigation, Phase 1 Environmental Site Assessment, and a title and survey review were also conducted during the due diligence process, Hart said.

“The results of the building and site assessment evaluations are favorable, with no major structural repairs or environmental remediation or abatement required at this time to use the building,” he reported to the Council on Tuesday. There is not the same degree of hazardous material as was found on the former UConn campus, Hart said, and the building could be used with minor enhancements.

Ultimately most or all of the building will likely be demolished, Hart told We-Ha.com, but decisions about short- and long-term uses of the property will be made following outreach to key stakeholders, including members of the Elmwood Senior Center, Elmwood Business Association, and the Library Board, and through the Town Council’s committee process.

In the near-term, the decision will be either to mothball the property – which would involve an initial cost of $25,000 and annual expense of $16,200 – or use it for limited purposes at an estimated annual cost of $150,300. The limited purposes could include Leisure Services and Social Services programming, as well as public safety training, Hart said.

“We will discuss with Council committee whether we should mothball it or use it on a limited basis,” Hart said.

The town has already paid the seller, Saint Gianna (Beretta Molla) Parish Corporation, a $50,000 deposit, and the balance of the $3 million purchase price has been included in the Capital Improvement Program that was approved in April. The town will pay the initial costs out of “pooled cash,” and once bonds are sold to finance the CIP in January 2022, proceeds will effectively reimburse the town for cash that was utilized.

The closing will likely take place this August, Hart said. The town will plan to hire a consultant to conduct outreach, which could take six to 12 months, and then design a new facility would may take another year.

The terms of the contract dictate that the property can “only be used for municipal purposes for a period of five years after recording of the deed and further that the name ‘St. Brigid’ or ‘Saint Gianna (Beretta Molla)’ cannot be used in connection with any operations or activities on the property.”

Fay said that while the opportunity to purchase the 100 Mayflower Street property was exciting, she opposed it due to the numbers and the potential burden to taxpayers. She expressed concern that the town would be paying the appraised value of $3 million, that remediation costs would be more than expected, and that it could become expensive to maintain.

Those who voted in favor of the purchase strongly disagreed with Fay.

Sweeney said the property provides the town with “the opportunity to have a vision for 2050 or beyond.”

The existing Elmwood Community Center, built in 1920, houses a teen center that’s basically a closet, doesn’t measure up to what’s found in other communities, and can’t sustain growth. “This is a need. We have growing needs for our kids and our seniors,” and the community in Elmwood, which can be addressed in one fell swoop, Sweeney said.

“I’m so excited about this opportunity … this is so important and can be so monumental in this town,” he said.

“I think it’s an amazing opportunity for the town. … We talk about wants and needs, and this truly is a need,” Gold said. He said this is a very strategic property for the entire community, and noted that the legislative delegation plans to apply for state bonding for the project.

“This is something we should embrace and move forward on,” Gold said.

Williams, who had voted against the original plan to purchase the property and opposed it again Tuesday, said his decision was difficult.

“The concept is a good one, the idea that we should consolidate public buildings, build new ones,” he said, but the recent experience with the UConn campus clouded his vision and created concerns about the potential future costs of not just purchasing but also demolishing and developing the property.

Blanks said her oldest daughter had attended St. Brigid, and she expressed her excitement about the opportunity and thanks to the parish. St. Brigid School had been a draw for the area, and “what I envision is what we do with the parcel now is going to restore that,” she said.

West Hartford is a leader in so many ways, but is lacking a facility for our youth. “I think it’s going to be a home run,” Blanks said.

“The idea of need vs. want, we’re talking about core functions of our town,” like seniors, library, youth, Wenograd said. “We’re a leading town with a mission to serve our residents,” he said, and this isn’t wasteful.

“We believe there should be a youth center. We have one now; it’s a closet,” Wenograd said. He said the location is perfect, the price is appropriate, and the environmental costs are in no way comparable to what exists at the former UConn campus.

In addition, Wenograd said consolidating the senior center, a teen center, the library, and other functions at the new site would be the “more fiscally responsible choice” because it would provide the town the opportunity to develop the current site of the Elmwood Community Center, which is better suited for private development.

Davidoff said this vote, this opportunity, is one of “historic proportion. … For me it’s a spirit of renewal.”

He reiterated the commitment to providing a process for engaging stakeholders before reaching any final decision about the final use of the property.

Cantor gave her sincere thanks to the Archdiocese for working with the town – and noted that Director of Leisure and Social Services Helen Rubino-Turco has had an eye on this property for many years.

“We have a 100-year-old building that has not served us well for a long time,” Cantor said of the Elmwood Community Center.

This community talks about being diverse, but “we don’t get there by standing still we do it by envisioning … taking advantage of all we can be.” Having a library attached to a community center could have exponential benefit, Cantor said.

Purchasing the property will benefit the community for the next 50 years, Cantor said. “Not for yesterday … not for today, but really for tomorrow.”

Jill Spear, chair of the West Hartford Library Board, attended Tuesday night’s meeting to voice support for the project. While the Faxon Branch Library is vibrant and welcoming, she said, the condition of the building and constraints of the structure and site have been an issue for at least 25 years.

“I’m excited about finding a new facility that could meet our core services and beyond,” Spear said, a place to create a forward-looking library to serve the community for years to come.

“We urge the town to be bold and create the 2050 facility, not the 2025 facility,” Spear said.” “Take this rare opportunity to create the jewel in the crown.”

The Town Plan and Zoning Commission unanimously recommended approval of the purchase agreement this spring, noting that it was “consistent with the Plan of Conservation and Development, in particular the Facilities and Infrastructure Section Goal that seeks to: Promote practices that will maintain and modernize Town facilities and infrastructure in order to meet the evolving needs of the community.”

The property at 100 Mayflower St., has been vacant since the Pre-K through grade 8 St. Brigid St. Augustine Partnership School, operated by the Saint Gianna Parish, closed at the end of the 2019-2020 academic year. The plans to close were announced last year, with the following stated in a March 12, 2020 news release: “Demographic shifts resulting in low enrollment over the last several years have created financial shortfalls that make it impossible for the parish to continue its financial support of the school.”