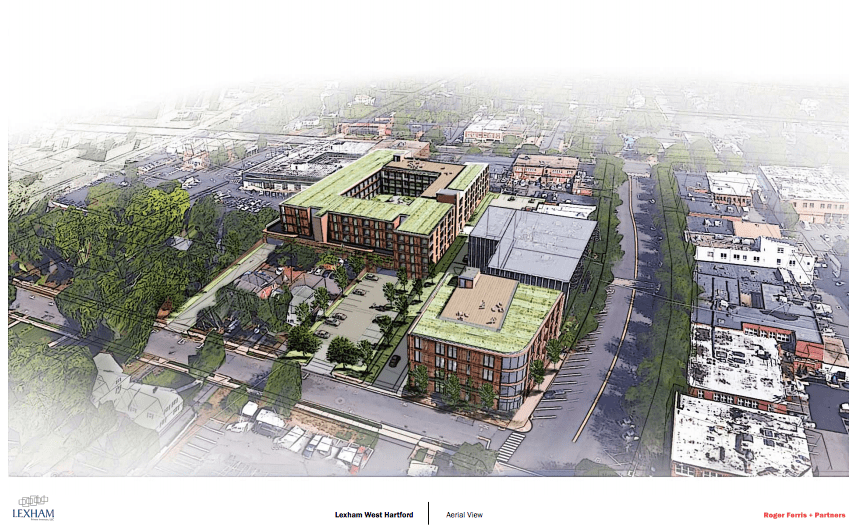 Lexham, which already owns multiple properties in West Hartford, has proposed a zoning ordinance for zone BC that will be the subject of a public hearing before the Town Council votes on Tuesday night.

The West Hartford Town Council will hold a public hearing Tuesday night, and is also scheduled to vote on a zoning amendment to permit increased floor area ratio (FAR) for properties in zone BC.

The hearing will begin at 6:30 p.m. in West Hartford Town Hall Room 314, with the Town Council meeting scheduled to begin at 7:30 p.m.

Lexham West Hartford Owner, LLC submitted the request in August to amend the existing ordinance to allow FAR to be increased from 1.25 to 1.5. The increased FAR would be required for a project the company would like to build, a moderately-sized residential development – two four-story buildings with total of approximately 85 apartment units, retail/commercial space, and parking to West Hartford Center – on land it already owns. Current zoning regulations allow for four-story structures in zone BC.

Although the company has not yet filed an application for the project, a rendering of the proposed development was provided to the Town Council as well as to residential and commercial property owners as part of Lexham’s outreach. All that the Town Council will be considering Tuesday night is zoning amendment.

Chuck Coursey, a West Hartford resident who has been engaged by Lexham as outreach coordinator, said that the town recommends neighborhood outreach to all property owners within 350 feet of the impacted area, but he said he went far beyond that with mailings, calls, and personal discussions with many of the homeowners over the past month.

Some opposition has recently arisen, and on Tuesday, Sept. 20, a group of residents formed the grassroots organization “A Better West Hartford” and started circulating a petition against the proposed zoning amendment. Scott Falk, one of the organizers, said that by Saturday evening more than 200 signatures had been secured. More than half of the signatures are from residents who live outside the bounds of West Hartford Center, he said.

“At the last hearing [in April] we felt like we were blindsided,” Falk said. After several public hearings earlier this year, on April 25 the Town Council withdrew a proposal to increase density in zone BC, which primarily includes West Hartford Center but also several other locations throughout town, and agreed to engage in a “thoughtful process,” Falk said. That ordinance change was much more extensive than what Lexham is proposing, and among proposed changes were increasing FAR to 1.75 and allowing for five-story buildings in the BC district.

“This comes from the developer, not the Council,” Falk said. He that he supports growth and that his issue is not whether the change in FAR is good or bad, but that he doesn’t believe the dialogue that was promised has taken place and would like more time for an amendment to be considered.

Falk lives on Arapahoe Road, and said that personally he would like to perhaps see more of a buffer between residential areas and the central business district of zone BC. “No one wants a four-story building up against a residential street,” he said.

“I just want to draw people back. FAR is far-reaching, and it’s time for a holistic report and discussion,” Falk said. “All I’m looking to do by stopping the proposal is to immediately engage the discussion I think we should have.”

Lexham Managing Principal Marc Lewis said Friday that West Hartford Center businesses and the Chamber of Commerce are very supportive of the proposed zoning amendment and the possibility of adding more residents who will be able walk to shop, eat, and use services. “We have had 100 percent overwhelmingly positive support from the entire business community in the Center, including from business merchants who live in town,” Lewis said. 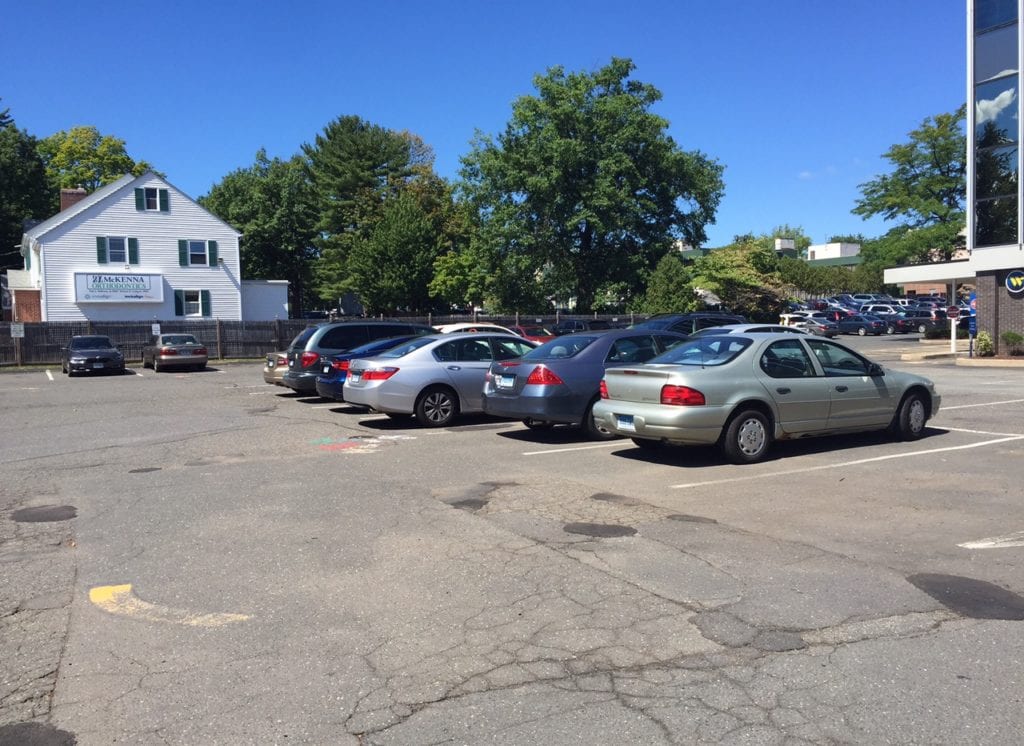 If the amendment to FAR is approved, Lexham will propose a residential development with ground floor retail/commercial occupancy for the current Webster Bank building parking lot. Photo credit: Ronni Newton

Most buildings in the Center were constructed before the current zoning regulations were enacted, and Lewis said most far exceed 1.25 FAR. The Central Building on Farmington Avenue, for example, has an FAR of 2.2. Even the increase 1.5 FAR would not permit much additional development, Lewis said, because few buildings are below that level now, and parking and other restrictions must still be met.

The mayor and Town Council members are unable to comment in advance of the hearing, but Director of Community Services Mark McGovern said in an email that both Lexham and neighborhood residents will have the opportunity to present their views on Tuesday evening. Lexham’s proposal is not as broad as the amendment that was withdrawn in the spring, McGovern said, but the creation of the “A Better West Hartford” website and petition indicates that there is opposition. 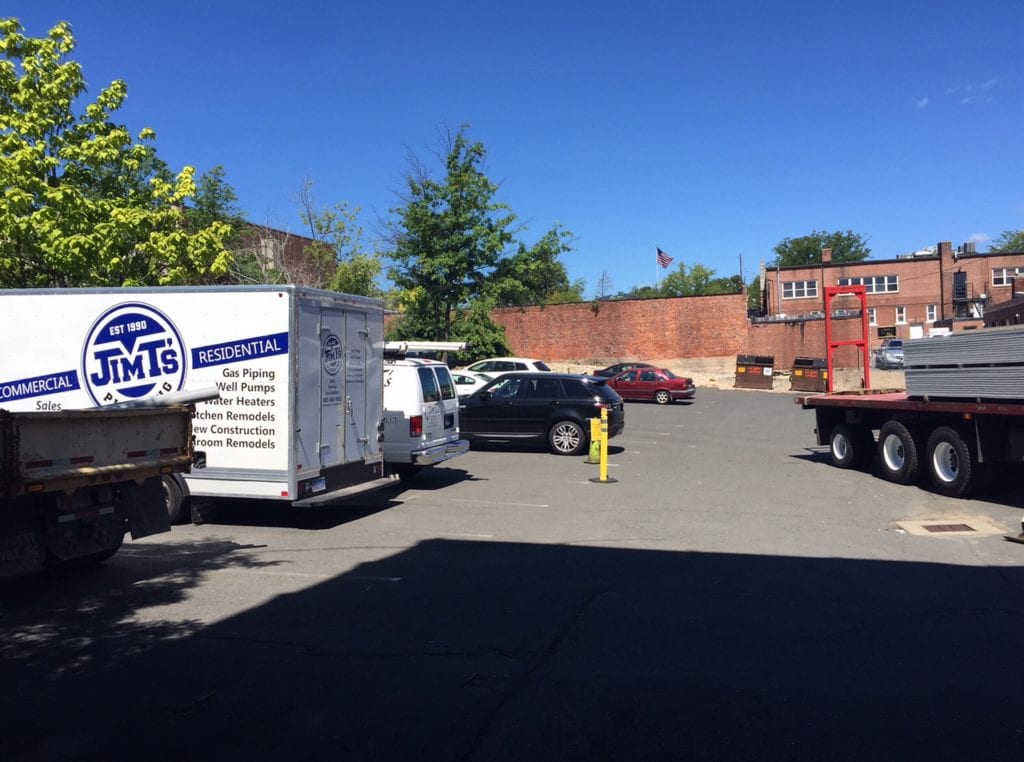 A four-story residential building will be proposed for this parking area behind LaSalle Road if the Town Council approves a zoning amendment increasing allowable FAR. Photo credit: Ronni Newton

McGovern said that his perspective has not changed since Lexham’s proposal was first introduced. In August he said, “We’re always interested in seeing major investment. It’s exciting bringing new residents to the Center, and new residents would also mean new customers for our businesses. It’s a positive opportunity for us to consider.”

If the amendment (reproduced below) is approved, Lexham will then plan to submit a request to the Town Council for a Special Development District for that project. The buildings would be constructed in the current parking lot of 65 LaSalle Rd. (Webster Bank, Becker’s Jewelers); and in an area that is currently surface parking for tenants and employees of 25-55 LaSalle (Ávert, McLadden’s, future Noble & Co., Central Optica); and 1001 Farmington Ave. (Scottrade and Optimal Wellness).

According to Lexham, one building will be entirely residential with two levels of parking, one of which will be below ground. The other will include commercial and retail on the ground floor. Lexham has stated that 100 percent of the parking spaces it will build on will be accommodated in the underground parking as well as a surface lot that will be constructed on the land currently occupied by McKenna Orthodontics at 8 Arapahoe Rd.

“I’m hoping the town wants something invested in this town,” Lewis said.