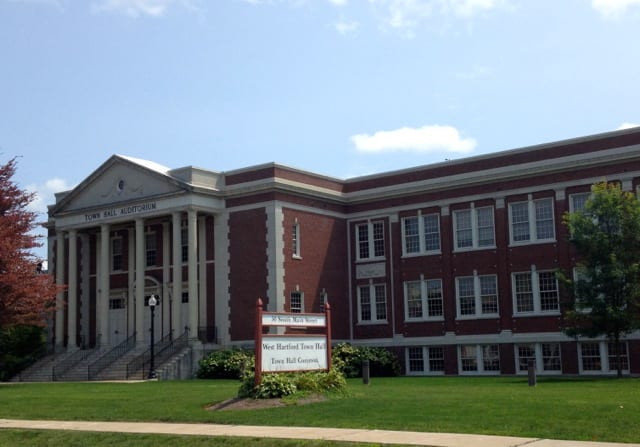 The budget presented to the West Hartford Town Council Tuesday night – a total of $269.3 million – increases overall expenses by 4.4 percent but increases net property taxes by only 1.9 percent.

“That’s one of the lowest increases we’ve had in a long time,” Town Manager Ron Van Winkle said. The budget adopted for 2015-2016 resulted in a 2.5 percent increase.

“The budget this year is a little bit different,” Van Winkle said as a preface to the presentation. The impact of a state-imposed cap on the mill rate for motor vehicles is the most significant change, and that is partially offset by an “OPM hold harmless grant.” Other changes to the state aid formula – especially for Education Cost Sharing (ECS) – have a positive impact on West Hartford’s revenues, but Van Winkle cautioned that some assumptions needed to be made because the town will adopt its budget before the state does.

“It’s not as easily understood as past budgets because there are a lot of things moving,” he said. However, Van Winkle added, “I want to emphasize one thing – if you own property in West Hartford the calculation is that taxes on your home will rise approximately 1.9 percent under this budget.” Van Winkle said he is very proud of the work the staff has done to put the budget together.

The specifics of the budget were outlined to council members by Director of Financial Services Peter Privitera, the town’s CFO.

The largest revenue producer in town is property taxes, Privitera said, and account for 85 percent percent of overall revenue.

Intergovernmental revenue, which is primarily state aid, is the next largest revenue source. Changes to the formula for state aid this year should give the town an additional $4.7 million above what was received last year.

Growth in the town’s Grand List, which added $34,209,653 of overall property value, will bring in nearly $1.3 million of additional revenue, offsetting some of the needed tax rate increase. Without that growth, property taxes would have increased by 2.5 percent rather than the proposed 1.9 percent, Privitera said.

Because of the state’s new required motor vehicle tax cap, this year’s budget actually includes two different mill rates – one for real and personal property and a separate one for vehicles.

The motor vehicle mill rate is capped at 32 mills. Without the cap, West Hartford could have a 39.49 mill rate to meet revenue needs, but because of the cap, there is a shortfall that shifts some of that burden to real and personal property. The proposed mill rate for property is therefore 39.63 for the upcoming 2016-2017 fiscal year.

The current fiscal year’s mill rate for real and personal property, as well as vehicles, is 38.31.

Privitera provided the council with details of the expense increases that impacted the budget. Wage and salary increases were minimal, he said, a net increase of $166,000 (0.04 percent). One economic development specialist will be added to the Community Services Department to serve as a liaison with the business community and assist with economic development issues, and two equipment operators will be added to the Public Works to handles tasks associated with mandated MS4 compliance that includes additional street sweeping and other measures to keep pollutants out of the waterways. A paramedic coordinator position has been eliminated from the budget because that position will be contracted out, Privitera said.

Town operating expenses will increase by $837,000 or 3.7 percent. The largest share of that is the MDC ad velorem tax – a charge to the town based on the value of real property – which increase by $526,000. There is also a shift of $300,000 in electricity expenses to the town that were previously part of the Leisure Services Fund. Leisure Services has an accumulated deficit, but the transfer of utilities to the general fund, plus the use of bond premium to offset debt service, will wipe out the deficit in several years, Privitera said.

Risk management expenses will increase $1.3 million in 2016-2017, reflecting an approximately 8 percent increase in health care costs. Town pension contributions increase $1.8 million but just like with the Board of Education, a large share of the pension fund contributions are to fund a shortfall caused by a recently-discovered actuarial error. There is an employee benefits contingency fund increase of $669,000 due to unsettled police and fire department labor contracts.

One capital improvement project to be implemented this year is a change to parking operations at the Memorial and Isham garages. Gates will be eliminated and parking kiosks with a “pay by license plate” system similar to those used on West Hartford Center roads and certain parking lots, will be installed. The total initial investment is $374,000, which will be paid out of the Blue Back Square Fund. Labor costs, as well as costs of maintaining the existing antiquated system will be eliminated. Downtime associated with malfunctioning gates will also be eliminated, and the investment will pay for itself in a few years, Privitera said.

Mayor Scott Slifka was out of town and unable to attend the meeting, but Deputy Mayor Shari Cantor said that the Town Council will spend the next several weeks on an in depth review of the budget. Emails with comments are welcomed, she said. “We need community input. This is the most important thing that we do because it affects all of our day-to-day lives.”

Budget documents will be available on the Town of West Hartford website.