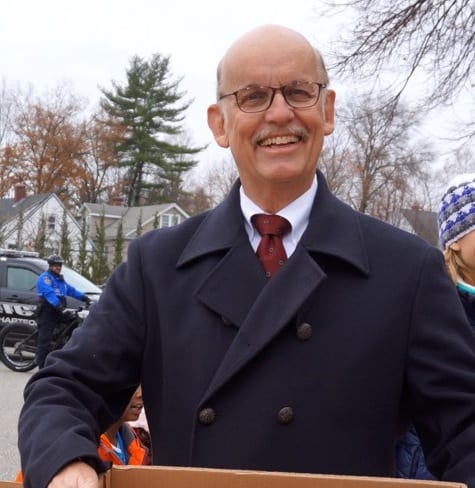 West Hartford Town Manager Ron Van Winkle announced that he will retire at the end of fiscal year 2016-2017.

After 30 years of working for the Town of West Hartford, Town Manager Ron Van Winkle has officially announced his plans to retire on June 30, 2017, at the end of the current fiscal year.

“I told the Council at the beginning of September. They’re my employer,” Van Winkle said Wednesday.

At its meeting next week, the Council will appropriate $35,000 to do a national search for Van Winkle’s replacement. Former Town Manager Barry Feldman came from the west, and Van Winkle anticipates a broad range of applications.

When he came to work for the town in 1986, it was as a consultant, Van Winkle said. He was born in West Hartford but went away for his education and was drawn back to the area for a job as an economist for Pratt & Whitney. He bought his West Hartford home in 1983.

He then spent several years as director of planning in the Department of Economic Development in Gov. Ella Grasso’s administration before branching out into his own consulting business.

Feldman became town manager on July 1, 1987, and asked Van Winkle to take the job of director of Community Services. “The night before he asked me [my wife] Ruth and I – she was pregnant with our second child – were having this conversation. She said, ‘You need to be around more,'” Van Winkle recalled.

It was far from a 9 to 5 job, but Van Winkle was happy to be working in West Hartford.

He worked for Feldman, and then for Jim Francis before taking the town manager job effective July 1, 2008.

“In April I will be 70. I should have retired a long time ago,” said Van Winkle.

When asked what he feels is his legacy, Van Winkle pointed out several things of which he is proud to have been a part of, including the town’s response to the October 2011 devastating storm and power outage. “We did really well. Everybody was part of that team and never had a second thought about being able to do it,” he said.

Van Winkle is also proud to have been instrumental in the changes to the Center and building of Blue Back Square – a major transformation that has taken place over the past 20 years. “It’s a place to eat, to enjoy, to live,” he said.

Housing prices are as strong as ever, Van Winkle said, and that’s something we should all be proud of.

He’s also proud to have merged the town and school functions as much as possible, with one manager of human resources, facilities, and finance. It’s saved money and makes sense, he said.

Van Winkle said his successor will face challenges, especially financial ones. When he took over it was right as the financial markets were crashing, but he has managed to run a surplus every year. “The new town manager needs to have an understanding of the financial pressures. This is an expensive town with quality services, and we need to preserve that.”

That said, this coming budget year will be very challenging, especially with the MDC’s proposed increased contribution and the state’s enormous deficit. “I suspect [the state] will have to turn to us,” Van Winkle said, and the town’s own budget already faces needs, demands, desires, he said.

“We will find a quality person who will be able to do this job just right,” Van Winkle said. The town has a great team of people, with great leaders in all departments.

The town is still adjusting to a new leadership under Mayor Shari Cantor, who took over in May 2016 from longtime Mayor Scott Slifka. “She has lots of financial experience and will be a great asset to the new town manager,” Van Winkle said.

Cantor said she and other Council members have known for a while that Van Winkle would be retiring. “We have been so lucky to have had him for 30 years,” Cantor said.

“He’s such a gentleman, treats everyone with respect, he’s smart and honest, and his expertise in economics has been so wonderful,” said Cantor. Van Winkle’s ability to look at the numbers from an economic perspective and then explain everything to the Council and the community has been great. He’s also a great cheerleader for the town, but that support is backed by expertise and history.

“He’s a great teacher. He can explain the complexities of the budget or projects in a logical way, and that’s been so helpful to the community as a whole,” said Cantor.

Personally, Cantor said Van Winkle has been such a pleasure to work with. “He’s a good man, a good friend, and I value his opinion and judgment. He’s so well-respected, everywhere I go, and that reflects positively on West Hartford.”

Former Mayor Scott Slifka said that Van Winkle contribution has been integral to the success of the town, but he doesn’t ever take credit for it. “The town has no idea how fortunate we’ve been to have someone of such high character for so long.”

Van Winkle brought the perfect combination of talents to West Hartford, Slifka said. He was the pre-eminent economist in the region who then transitioned to government. “He had those skills, but he’s also born and bred in West Hartford – a hometown guy working in the community that raised him. That had an immense impact on the decisions he’s made.”

Van Winkle has also overseen the hiring of all of the current directors, and all are quality people, Cantor said.

The Town Council has already finalized the town manager job description, and Cantor said that whether an internal candidate rises from the ranks or an external hire is made, she’s confident that we will get the best person.

Slifka thinks that West Hartford is such a unique community that it’s important to consider a resident for the job. “You need someone with an appreciation for how development impacts the community, who knows what the neighborhoods are like and what they were, their history. It’s visceral,” Slifka said.

“It’s the most important decision the Council will make … He will be leaving some pretty big shoes to fill,” said Cantor.

Van Winkle said he loves West Hartford and has no plans to move, but will be spending more time visiting his adult sons. One lives in San Francisco and the other is in Washington, DC. He doesn’t have any grandchildren yet, but he hopes to one day and will welcome the chance to spend time with them. His wife, who is retired from CIGNA, has been excitedly making plans.

“It’s been a great town and a great experience for me. I never intended to stay this long,” Van Winkle said. He’s enjoyed the challenges and the opportunities, and loves the town as a resident and an employee.

“I will enjoy not getting up at 6 a.m. every day and getting home at 8 p.m. This is not an 8-hour-a-day job at all,” Van Winkle said. “I look forward to slowing down. There’s a lot to do, books to read, weeds to pull.”