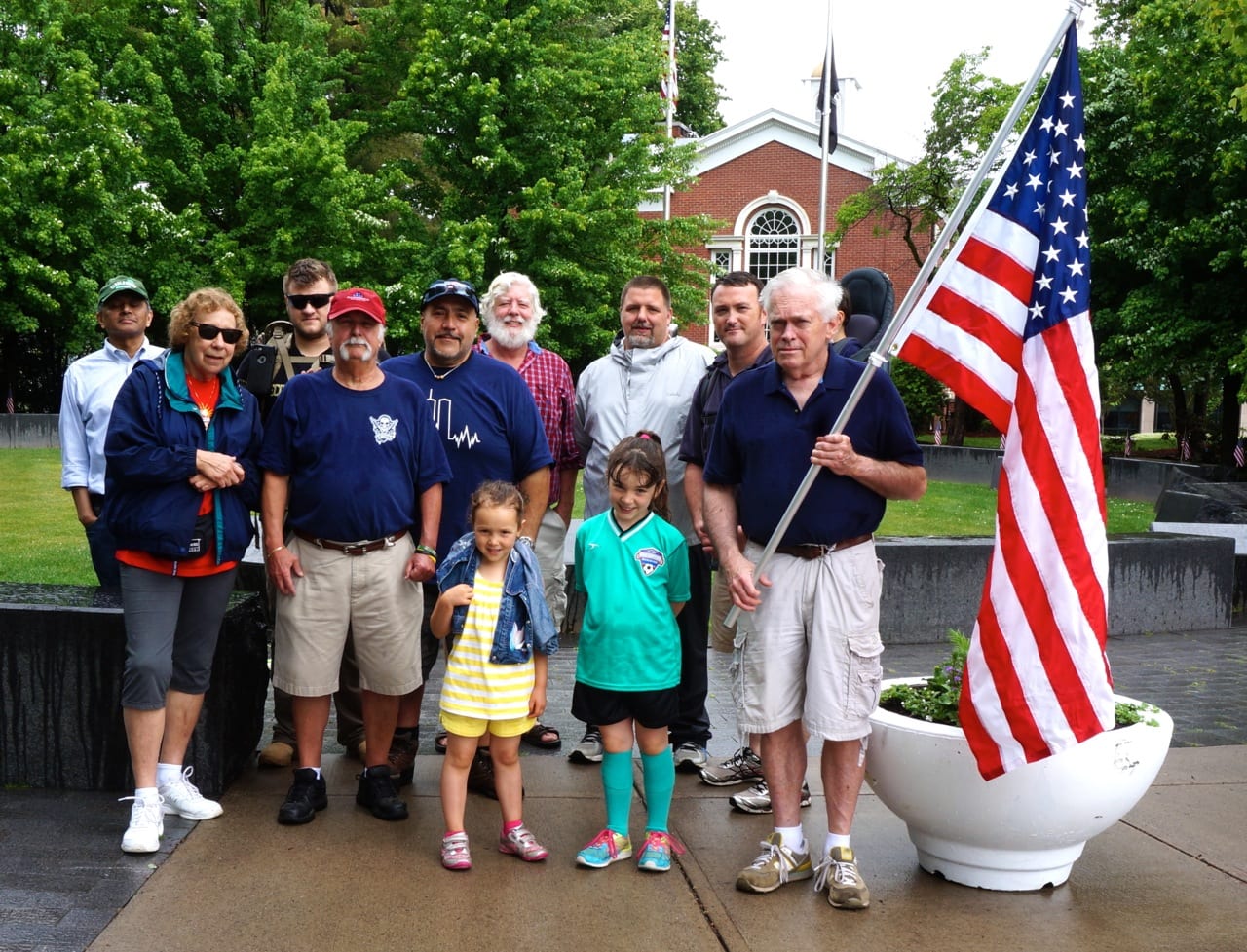 A group of veterans and supporters pay tribute to the fallen at the Connecticut Veterans Memorial in West Hartford after staging an informal parade along the Farmington Avenue sidewalk. Gerry Aldrich, holding the flag, organized the group that included his wife Susan (at left), Giovanni Seccareccia (center with dark blue cap), Joe Goldkamp (back row in red shirt), and Sean Caffyn (back row at far right with baby in backpack). Photo credit: Ronni Newton

The official West Hartford Memorial Day Parade was canceled in 2016 due to the threat of hazardous weather, but a small group decided to march anyway and pay tribute at the Veteran’s Memorial. 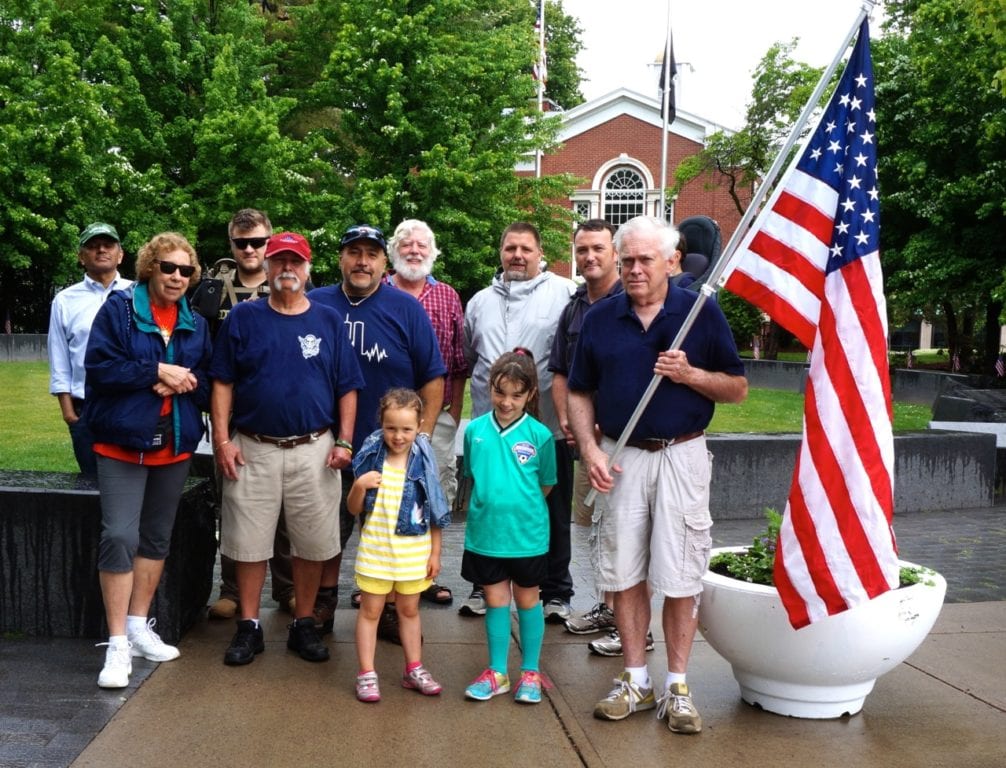 Monday morning’s West Hartford Memorial Day parade was canceled by the Commission on Veterans Affairs due to the threat of extreme weather, but a group of veterans and some supporters decided to march anyway.

Their reason for marching wasn’t a protest of the decision, but rather the compelling feeling that the town’s veterans should be honored despite the weather. 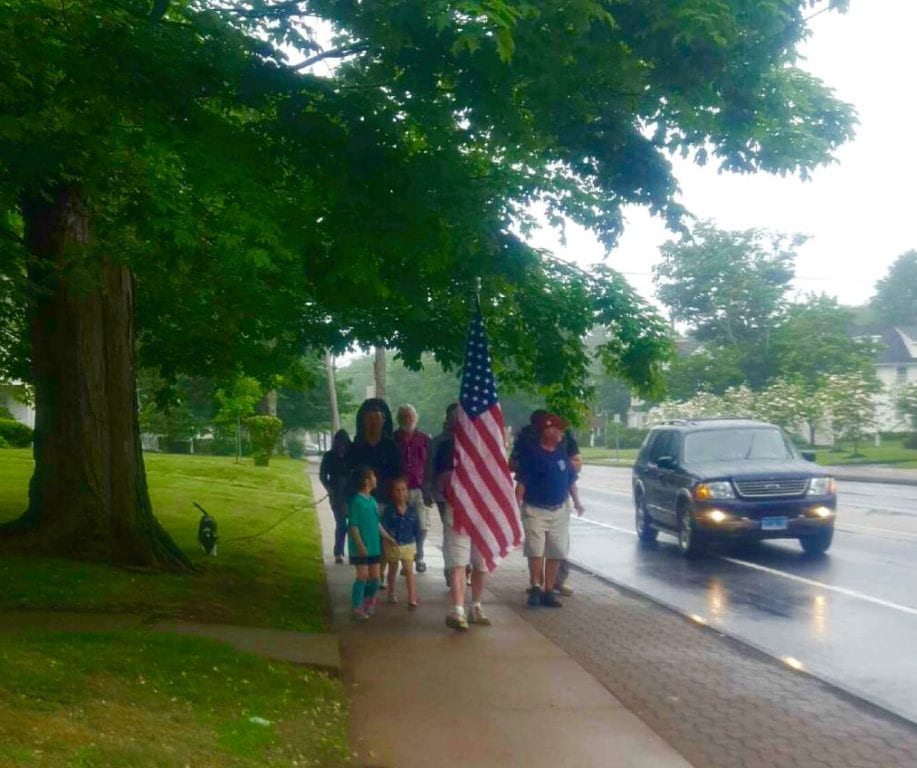 A group of veterans and supporters march in an informal Memorial Day parade down Farmington Avenue in West Hartford after the original parade was canceled due to rain. Photo credit: Debbi Zimbler

Gerry Aldrich, a Vietnam era veteran, organized the group of about a dozen who met at the intersection of Woodrow and Farmington Avenue, where the traditional parade kicks off. He posted the idea of the informal parade on a thread on the West Hartford Neighbors and Friends Facebook page that followed the We-Ha.com story of the parade’s cancellation.

“They’re not going to cancel our parade,” Aldrich said after the group honored fallen West Hartford veterans with a moment of silence at the Connecticut Veterans Memorial at the intersection of Farmington Avenue and North Main Street.

“These guys didn’t get an option to stay in their bunks if it was raining,” said resident Chip Adams who joined the group and helped carry a large American flag.

Giovanni Seccareccia has many family members who are veterans, and felt that it was important to honor them on Memorial Day. He heard about the march on Facebook. “Veterans have gone through mud and typhoons. I thought we could at least try,” he said. “I understand why they canceled but I’m glad we did something like this.” 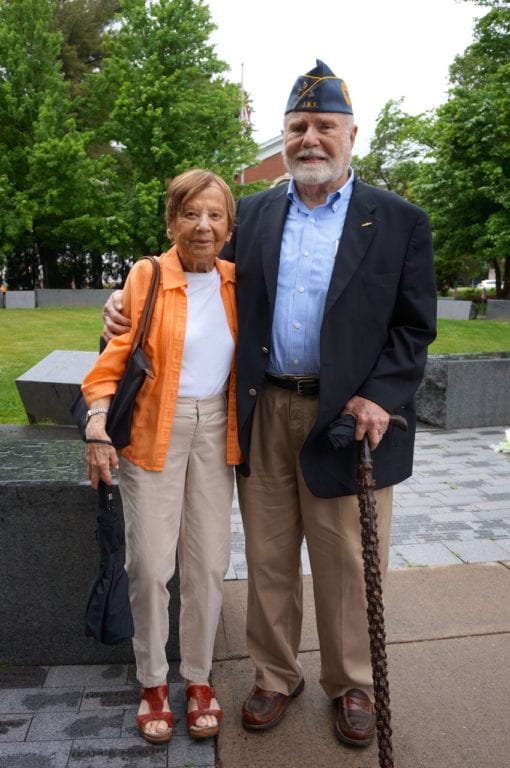 Jim Tierney and his wife Phyllis arrived at the Veterans Memorial shortly before 11 a.m., hoping that the ceremony would take place even though the parade had been canceled. Tierney, a World War II, Korean War, and Vietnam War veteran is a retired Navy officer who chaired the group that built the Connecticut Veterans Memorial in West Hartford.

Tierney, who is a member of the Connecticut Veterans Hall of Fame and the Jewish War Veterans, said he was in high school during World War II. “I graduated on Sunday and on Monday there you go,” he said of his service in the military.

“It was not a question of ‘if’ but of ‘which’ [branch of the service]. It was a nation united and you didn’t think twice,” said Tierney, who joined the Navy because he didn’t like the idea of crawling through mud.

“I never looked back,” said Tierney. He spent 12 years as a submarine seaman, and became a chief He served on destroyers and amphibious ships and eventually commanded his own ship.

“I’m not a hero. I’m just one of the guys and Uncle Sam was my travel agent,” said Tierney.

Aldrich said that he planned to be riding on the trolley that traditionally carries veterans in the West Hartford parade, but recently learned that the trolley had been sold and was no longer available. Golf carts were to be used instead, which would have been tough on some of the older veterans if the parade had been held in heavy rain.

West Hartford Public Relations Specialist Renée McCue said Monday afternoon that the Commission on Veterans Affairs mad the difficult decision to cancel Sunday night based on the information they had available.  “The reason yesterday was that the outlook around parade time was 100 percent chance of precipitation with lightning. Lightning was truly the determining factor. It was just too risky to put all the children who march in the parade in danger,” she said.

Safety was a paramount concern, Commission on Veterans’ Affairs member Larry Josiah said Monday in an email. “The West Hartford Veterans’ Commission kept close tabs on the developing weather situation yesterday and based on those weather reports that included a forecast of thunder and lightning, we decided to cancel the parade and the ceremony in the interest of all participants in the parade. Also, as everyone knows, many of the participants in the parade consist of youth sports teams, boy scouts, girl scouts, school bands and other groups that would’ve had many children marching in the parade.”

West Hartford was not the only town or city to cancel its parade on Monday, said Josiah.

The West Hartford Memorial Day parade is not canceled very often, and the last time was in 2003 when more than an inch of rain fell on parade day.

It was still raining lightly when the group set out Monday morning, but by the time they reached the Veterans Memorial the weather began to clear and the sun poked through. “Maybe we brought the sun,” Aldrich said. 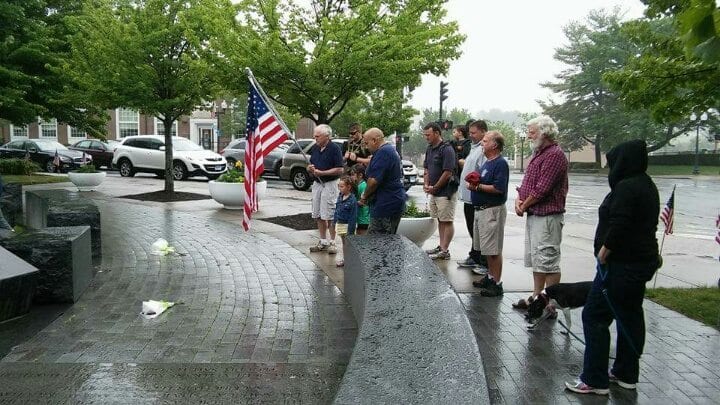 A moment of silence for the fallen on Memorial Day. Photo courtesy of Giovanni Seccareccia 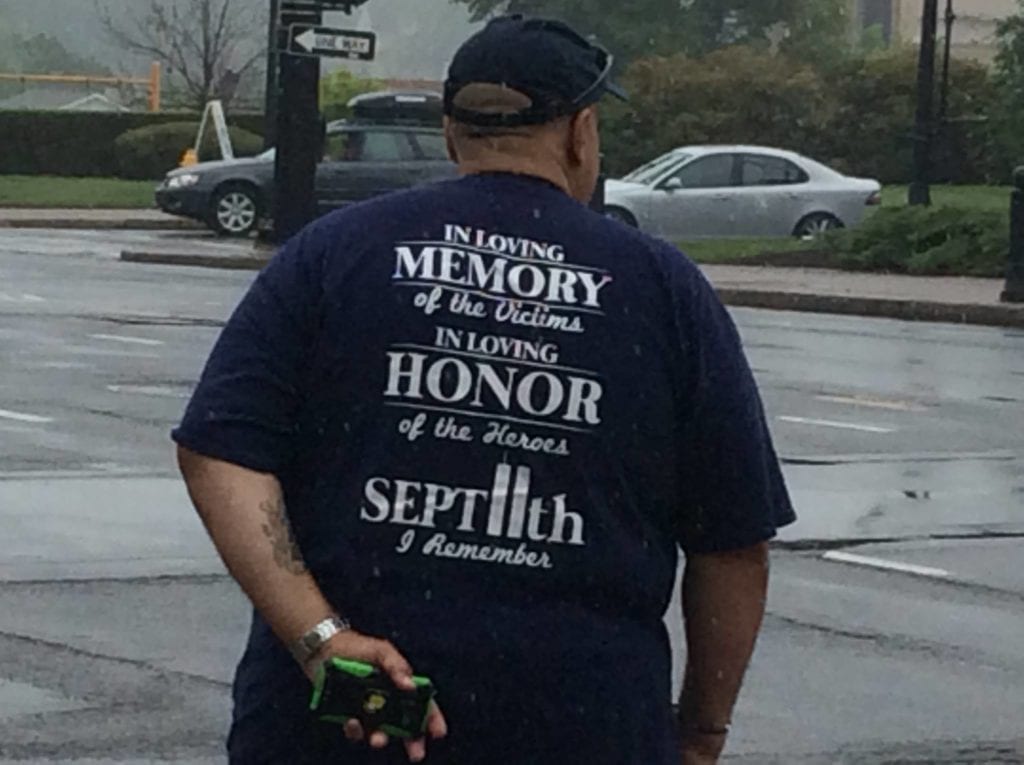 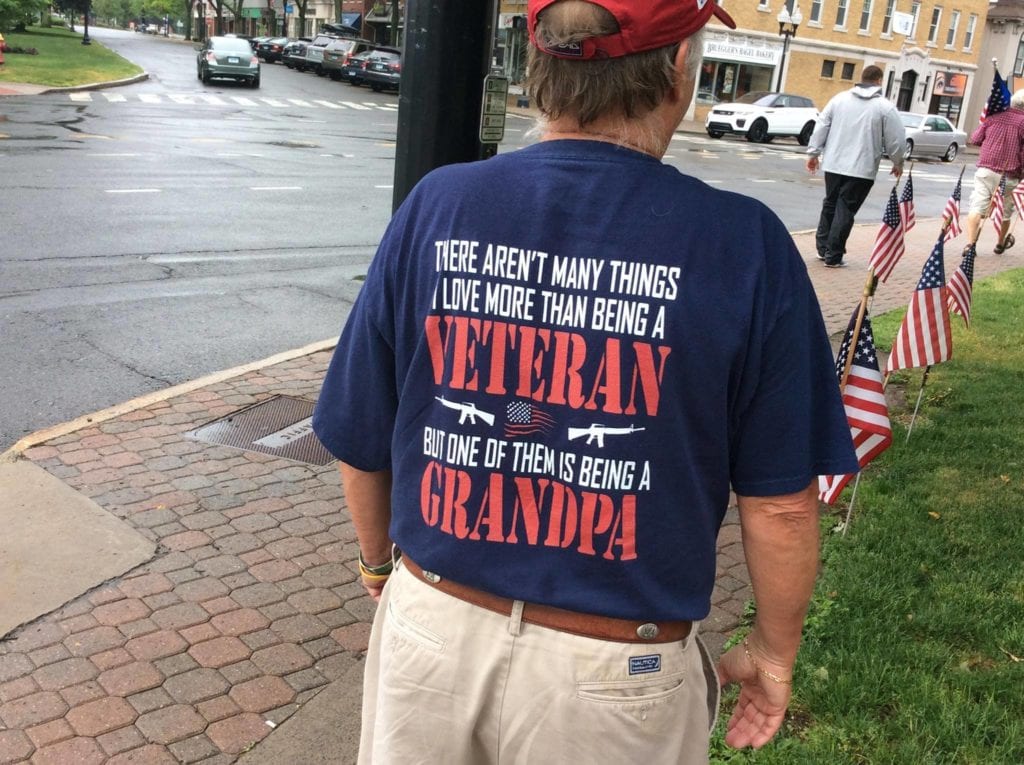 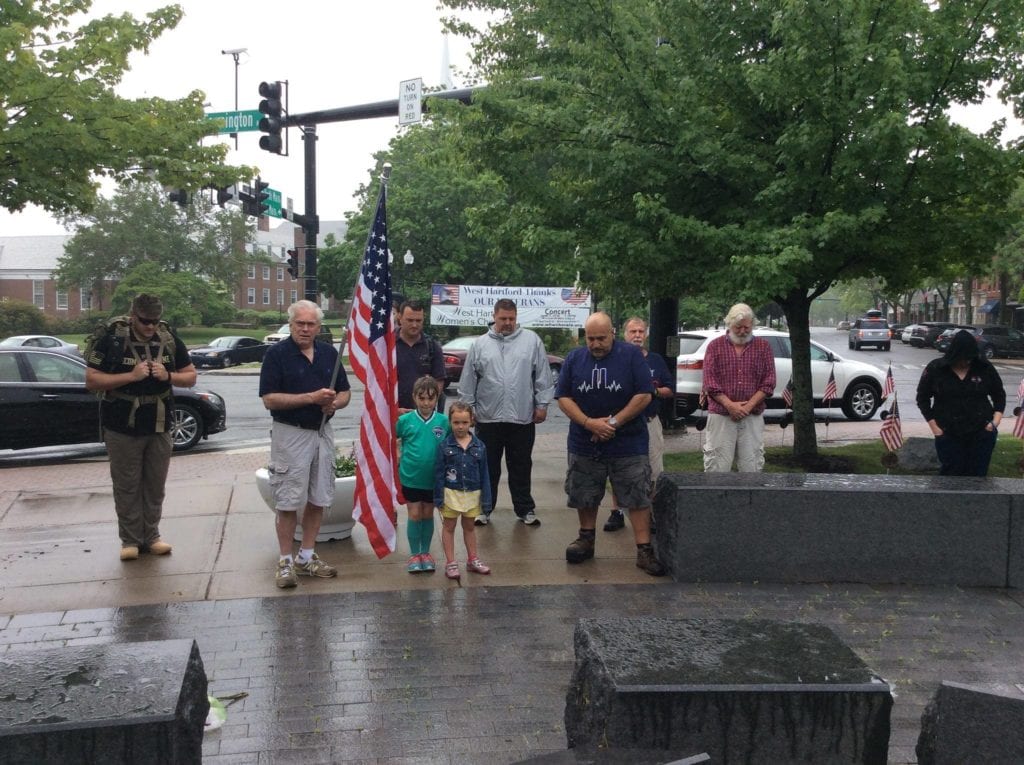 A moment of silence in tribute to fallen veterans. Photo courtesy of Giovanni Seccareccia 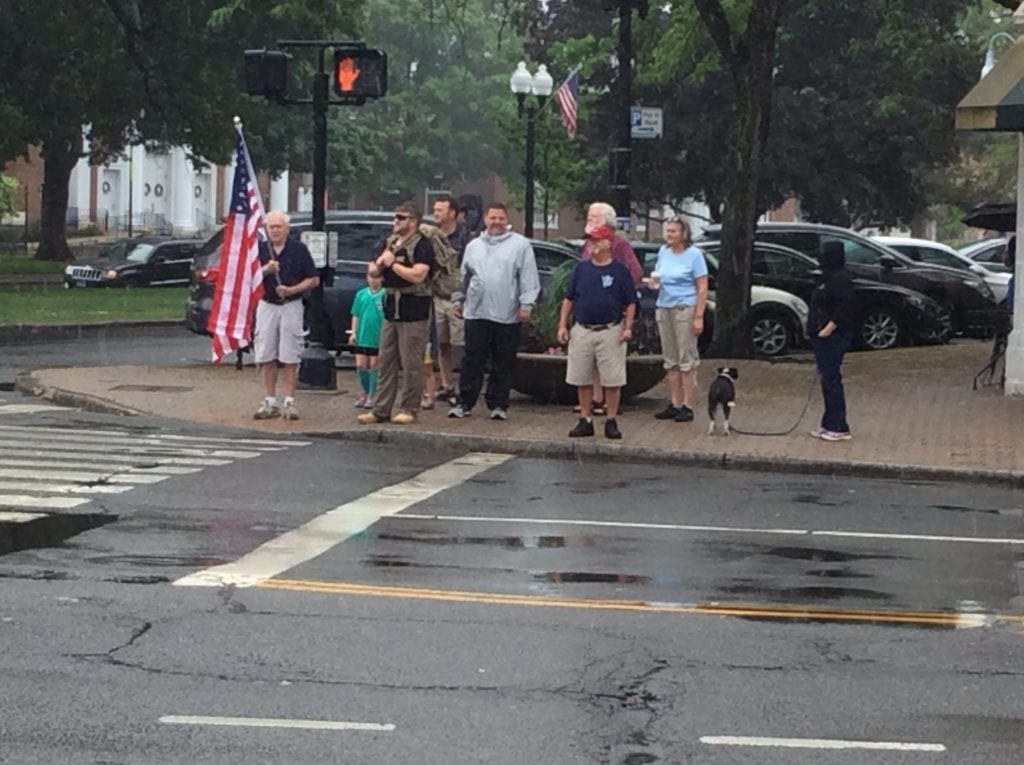