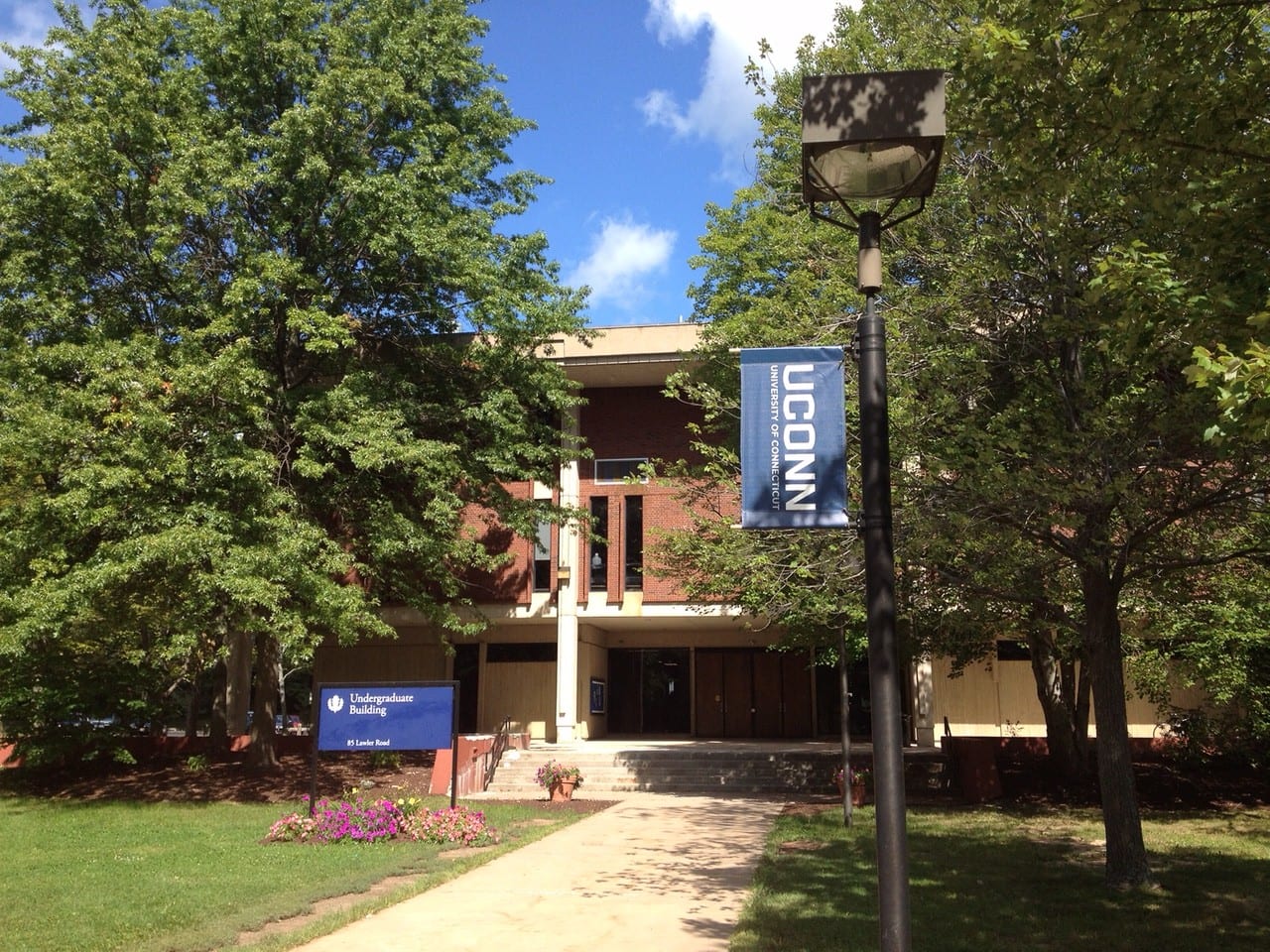 The Town of West Hartford is passing on the opportunity right now to purchase the property and buildings on the UConn West Hartford campus. Photo credit: Ronni Newton (file photo)

The Town of West Hartford had last year negotiated with the state what appeared to be a favorable agreement to purchase for $5 million the property at Trout Brook Drive and Asylum Avenue that is currently the home to the UConn Greater Hartford campus, but on Tuesday night Town Manager Ron Van Winkle announced that due to budget issues and the potentially astronomical costs of cleaning up the property, this is not the right time for the town to move forward.

In a letter dated Feb. 27, 2017, Van Winkle officially notified UConn General Counsel Richard Orr that West Hartford will not meet its due diligence date, and suggested that the University might want to solicit other buyers.

The primary factor influencing the town’s decision is financial. Van Winkle said that he is facing an enormous challenge of crafting West Hartford’s FY2018 budget and incorporating at least $14.5 million in state aid cuts, plus increases in MDC fees and other mandatory adjustments which could result in a budget shortfall of as much as $25 million.

“The State of Connecticut has a serious problem,” Van Winkle said in his report to the Council. No matter what the legislature does, Van Winkle said the increase for West Hartford taxpayers will likely be “significant.”

Passing on the UConn opportunity might be seen as one of the “first cuts” the town needs to make in dealing with fiscal challenges, Van Winkle said. Buying another property could not be justified when the town needs to consider making major cuts.

“This may not be the time for the town to purchase the UConn property,” Van Winkle said. The Council’s Community Planning and Physical Services Committee, meeting in executive session last week, directed him to inform UConn that the town will not be able to close in March.

“It’s a wonderful opportunity and the Town would love to have it, but the buildings are in in awful shape,” Van Winkle told the Council. Studies done thus far indicate that the cost of demolishing the buildings could be $5 million, plus another $500,000 for soil remediation, he said.

Following the meeting, Van Winkle said that if the buildings were to be retained, significant renovation and repair would be needed. He noted that there are serious problems with leaking roofs and water damage.

In response to a question from Minority Leader Denise Hall, Van Winkle confirmed that the town still has the right of first refusal if UConn finds another buyer, and also retains power over the zoning of the 58-acre parcel.

A payment of $750,000 was due on March 13, 2017, which was the end of a due diligence phase that had twice been extended. In October the town was granted a 90-day extension for additional due diligence after a higher-than-anticipated level of PCBs were found on the property. Another extension was subsequently granted as environmental and other assessments continued, and March 13, 2017, was the close of that phase.

A deposit of $250,000 was made when the Purchase & Sale agreement was executed last summer, and the remaining $4 million was to be due at the closing date of Oct. 2, 2017, or later if UConn delays its plans to vacate the campus and move to its new Hartford location in time for the fall 2017 semester.

Although Van Winkle said it might never be the right time to purchase the property, the letter to UConn officially requested that the University extend the due diligence date to “two weeks after the adoption of the state budget.”

“We don’t know when that would be,” Deputy Corporation Counsel Kimberly Boneham said Wednesday, but the timing would allow the town the opportunity to analyze its fiscal conditions once the levels of state aid have been finalized.

The letter also noted that the town understands UConn’s desire to complete the sale since the move to the new downtown Hartford campus is planned for this fall. “In recognition of this, and given the uncertainty of the situation, the Town has no objection if the University would like to entertain other options including soliciting offers from other potential buyers,” Van Winkle wrote in the letter.

UConn could come back and say they will extend the due diligence period, Van Winkle said Wednesday afternoon, or they could decide to look for other buyers. He does not expect a response until UConn has a chance to discuss the letter with its Board of Trustees, he said.

The town had planned to meet with residents in 2017 to gather input about potential uses for the property.

West Hartford had negotiated the $5 million purchase price in May 2016, after UConn had initially planned to sell the property to China-based Weiming Education Group for $12.6 million. West Hartford would have received estimated tax revenue of $500,000 from the for-profit school.

A week earlier, a capacity crowd attended a forum at West Hartford Town Hall to voice opinions on whether or not the town should purchase the property or allow the sale to Weiming, which wanted to turn it into an international academy for high school students from China and other countries throughout the world. Weiming had also expressed an interest in contracting with West Hartford Public Schools where its students would complete their junior and senior years.

Weiming has expressed no further interest in West Hartford and is currently working with other municipalities for the site of their school.

The Children’s Museum has also expressed a desire to move to the UConn property, but would need to raise $25 million.

The property is currently zoned for single-family homes on quarter-acre lots, with a special use permit allowing it to operate as a school. A significant portion of the 58-acre parcel is classified as wetlands.