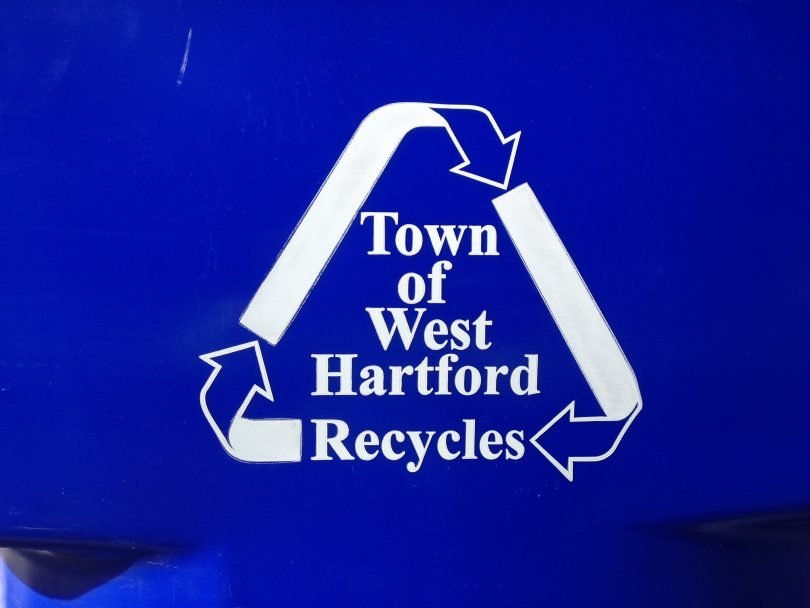 Weekly curbside pick-up of recycling, which began as a pilot on July 1, 2017 with the intended results of dramatically increasing the town’s diversion rate, will end on June 30 with a return to a biweekly schedule. At the same time, the town is adding biweekly curbside yard waste collection that will run through Oct. 31.

Beginning in 2020, biweekly yard waste pick-up will run from April 1 through Oct. 31.

“The weekly program was just a trial, and it went through two years,” Director of Public Works John Phillips said. “The outcome of the trial is that we moved [the increase in recyclables] less than 2 percent, and trash didn’t change at all. It’s not what we had hoped.”

While many people got used to the weekly recycling very quickly, the “put-out rate” – the number of people who actually put their recycling barrels at the curb weekly – was only 60-70 percent. “We’re paying for 100 percent,” Phillips said.

For most people, biweekly recycling pick-up is sufficient, Phillips said. With weekly collection, many residents just threw entire cardboard boxes in the bin without bothering to collapse them because they had the capacity.

“I think we’re doing the responsible thing. It was a pilot and we weren’t seeing significant success,” Town Manager Matt Hart said. “We are returning to biweekly, and introducing a key new service with yard waste collection, to keep that material from going into the bins.”

“It’s really what I see as doing the responsible thing,” Hart said. “Taxpayers want us to use resources effectively.”

Over time, more and more yard waste has been ending up in the trash stream as residents add it to their green barrels. “Yard waste is a recyclable material and should be diverted from incineration or landfills,” said Phillips. 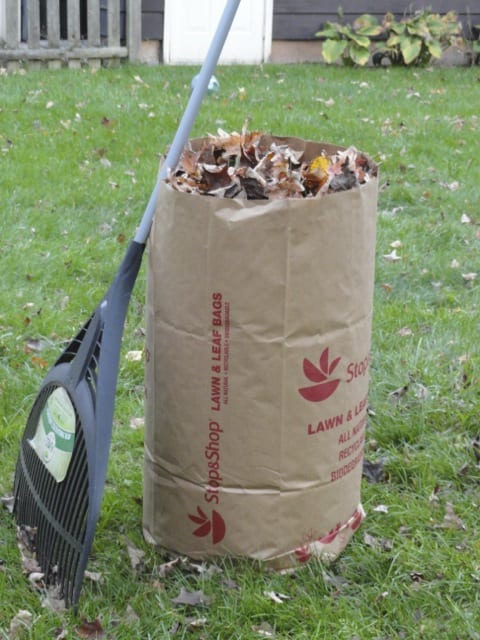 All leaves and other yard waste, other than bundled branches, must be placed in 30-gallon biodegradable bags. Photo credit: Ronni Newton (we-ha.com file photo)

The spring yard waste collection, which has been offered once a month in April, May, and June, has been very successful in diverting material from the waste stream, and Phillips is hopeful that offering those results will continue.

The list of materials that can be picked up through curbside yard waste collection remains unchanged, and should be placed in 30-gallon biodegradable leaf bags and placed at the curb on the same day as your recyclables. Brush must be cut to four-foot lengths, tied and bundled.

Rocks, or large pieces of wood, are not good yard waste, said Phillips. “Don’t just drag a 10-foot limb to the curb,” he said, noting that the parameters of the program will be strictly enforced.

During spring yard waste pick-up, residents have attempted to stretch those rules. “We’re not picking up the whole bush,” said Phillips, mentioning that people have dug up entire shrubs and placed them, root ball and all, at the curb for pick-up.

Residents will also be able to purchase a 96-gallon yard waste cart – which holds roughly three bags worth of material – directly from Paine’s at a cost of $73.12. While the purchase price is being subsidized by the town, the bin will be owned by the resident.

The Town of West Hartford provides curbside collection services of trash, recycling, yard waste, and bulky waste (at a fee) to all single-family homes, as well as multi-family buildings that have up to three individual dwelling units.

How do I know when to put out my recycling and yard waste?

Recycling and yard waste, as well as textile recycling through the pink bags, will all be on the same day, every other week according to an “A” and “B” schedule determined by Paine’s.

There is a link on the Paine’s website to input your street to find out (or double-check) if it’s your recycling week, and all residents will be receiving a postcard by June 24 informing them of the program, Phillips said. A more detailed brochure will also be included in the automobile tax bills which will be sent out shortly.

Also part of the FY2020 budget, a position was approved for a part-time recycling coordinator, who will track the every changing recycling market, educate the community on better diversion, and work to improve the connection with the schools. There is currently almost 100 percent participation in a food waste diversion program in the schools, Phillips said, and students often set a good example for their parents and can help with overall recycling education.

Once the recycling coordinator is on board, that person will be able to interact directly with the public, Phillips said, and will be actively involved in social media and keeping the town’s website updated with the latest developments.

“I’m really excited about this position given how dynamic the recycling industry is right now,” Hart said. “It will be very, very helpful for our organization and the community.”

The recycling market has been in flux, with a drastic reduction in what will now be accepted in China, where most recycling was formerly sent. “The ‘Chinese sword’ has been a long-time coming,” Hart said, referencing China’s dramatic restriction on the level of contamination permitted in recyclable material the country will accept. The policy began in 2018 and has had a major impact on the U.S. recycling industry.

New markets are being created, and China is still taking in what is pure, Phillips said. “Recycling is still happening, and it’s still part of materials management,” he said, but the Chinese sword opened up a major issue. 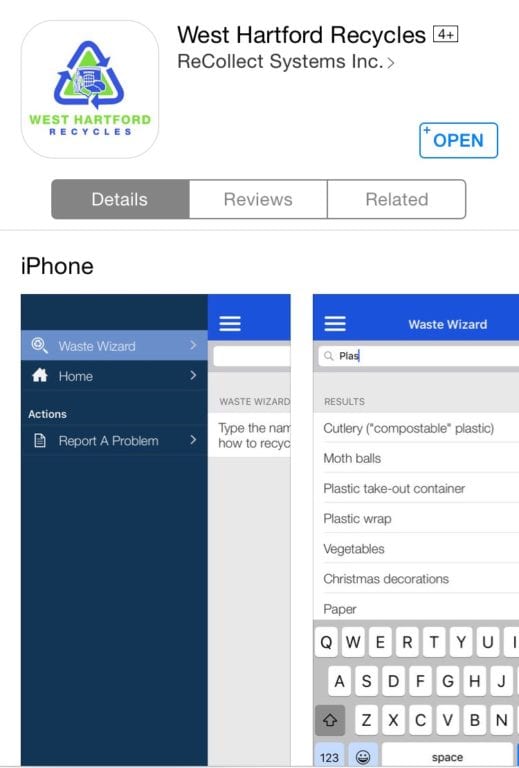 The town also has a recycling app – West Hartford Recycles A-Z Waste Wizard – which is a convenient way to check and see if something is recyclable.

The Public Works web page on the Town of West Hartford website is a great resource, Phillips said, and includes a direct link to RecycleCT.com which has the “most concise list of materials acceptable in the blue bin.”

Residents who would like to obtain a second recycling bin can contact Paine’s directly 860-844-3000. The subscription cost for a second bin is $79.20, and will be billed directly by Paine’s, Phillips said.

Residents can also continue to bring their recyclable items to the Yard Waste and Recycling Center. An annual residency permit is required.

What does the future hold?

Phillips said he favors legislation to increase the redemption fee to 10 cents, something that will result in less volume at the curb.

The town doesn’t pay a fee for processing its recyclables as of now, but Philips said he is sure that will change by next year.

A “heavy” item that goes into the trash stream is food waste, but there are no immediate plans to add curbside organic waste pick-up, Phillips said.

“Is there an appetite to pay for that service?” Phillips asked. Diverting organics from incineration or a landfill would have “more of a social impact than a fiscal impact” in terms of saving the town money. While the cost for processing would have to be paid, along with the cost of transportation with a specialized truck that is, the town is continuing to explore partnership opportunities.

For the future of organics recycling, West Hartford is geographically in a good position – close to the Quantum Biopower facility in Southington, as well as to MIRA which would like to add organics recycling as the facility is upgraded. Right now, however, there isn’t enough capacity for large-scale organics waste recycling.

West Hartford held a small-scale three-month test of organics recycling that began in October 2017. “The program taught us that we can do it,” Phillips said, and it also taught the town what the cost might be. The participation rate was 100 percent, but it’s expensive. In the test, all of the participants were volunteers, but the put-out rate would be smaller if it were implemented town-wide.

“You’re paying for 100 percent [put-out],” Phillips said. That’s what has to be contemplated in any materials management program, he said. “It’s difficult to customize for 20,000 customers.”

Hart said there have been questions from residents about implementing bi-weekly trash collection instead of cutting back on recycling pick-up.

“Many need weekly [trash] pick-up, and its also important for public health reasons. We don’t want complaints of rodent harborage,” he said.

Phillips said that realistically, cutting back the frequency of trash pick-up is probably a decade away. “You have to deal with the organics first … then we can have that honest discussion. We’re not there yet, but that’s where we are heading.”

The state has not changed its mandates about requiring 60 percent diversion by 2024.

It’s really about “the proper way of processing,” Phillips said.