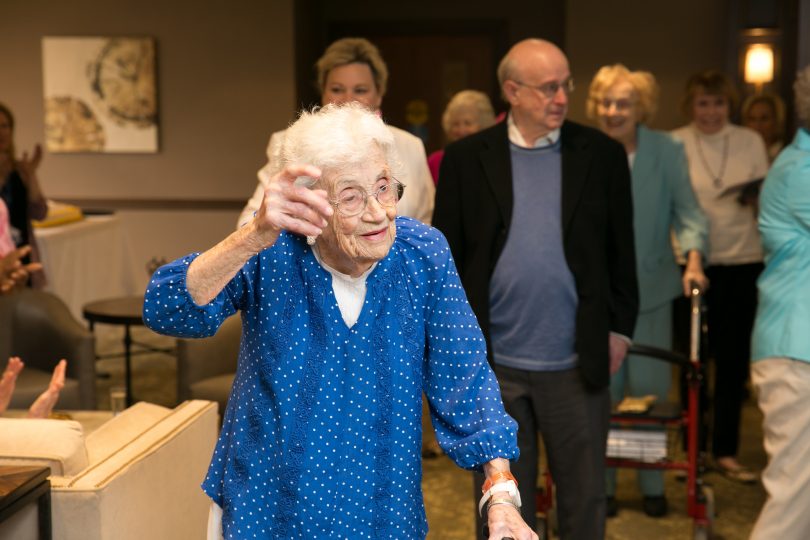 Sophie Bialeck greets more than 100 guests at her 105th birthday party at the McAuley on May 26, 2019. Photo credit: Mike Schauck, Iris Photography

Sophie Bialeck, a resident of The McAuley, reminisces about her more-than-100 years of life. 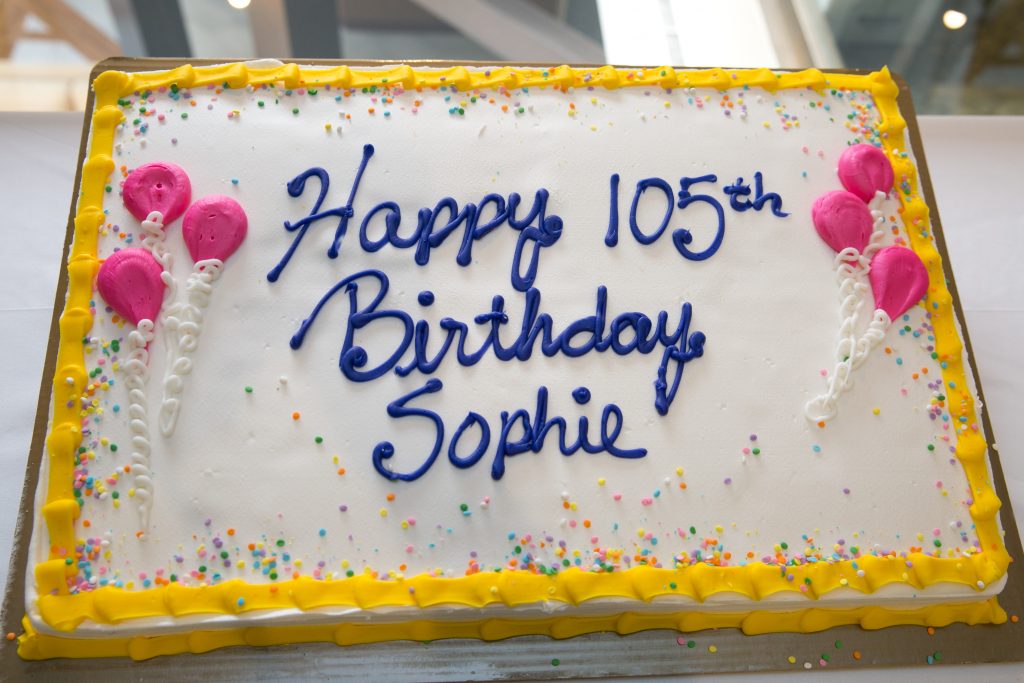 Sophie Bialeck recently had a birthday party, a grand celebration attended by more than 100 people – family members, friends, and residents and staff at The McAuley in West Hartford, where she has lived since 2001. 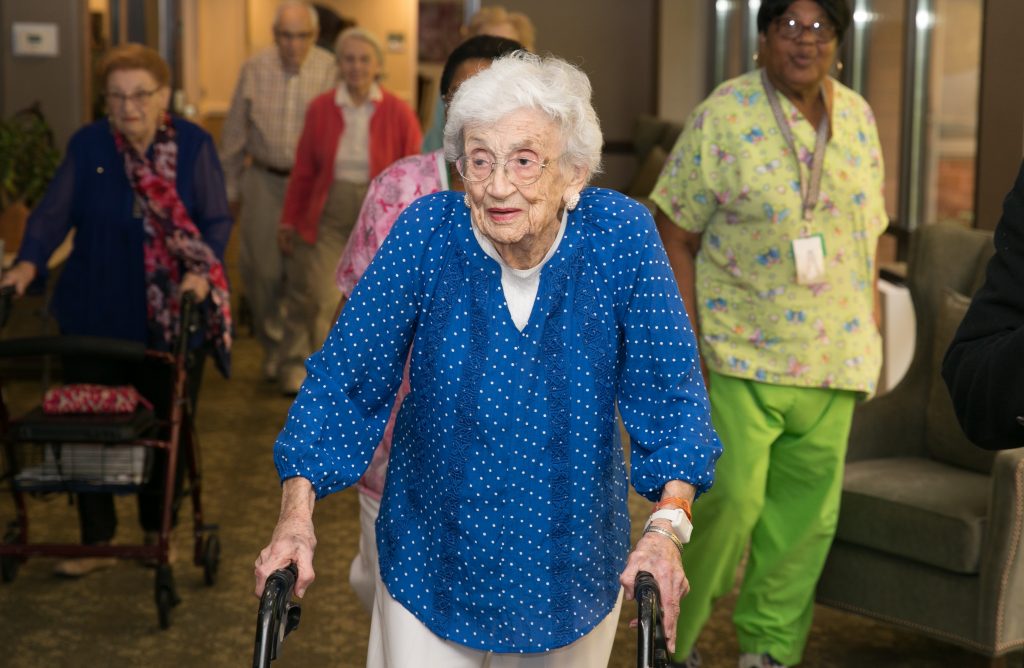 Sophie Bialeck enters the room at her 105th birthday party at the McAuley on May 22, 2019. Photo credit: Mike Schauck, Iris Photography

Bialeck said she had a great time at her birthday party. “It was wonderful, stupendous.”

There’s nothing at all remarkable about that – except that Bialeck turned 105 on May 26.

“It’s a roll of the dice.” Bialeck said she has no idea how she has managed to live so long.

Joke Trzaskos, resident services coordinator at the McAuley, said that Bialeck has “a sharp wit, great sense of humor, and great outlook on life.”

Bialeck responded by shrugging that off. “People here are very nice,” she said.

“She’d bottle it if she knew it,” said her son, Alan, adding that his mom smoked two packs a day of unfiltered Pall Mall cigarettes until she was 48. That’s when he refused to buy her more, so she quit, cold turkey, and wondered why she hadn’t quit earlier.

When asked what she thinks has changed the most in her lifetime, Bialeck didn’t mention the obvious – transportation, communication, and other technological advances.

“It’s the attitude toward women and what women can do,” she said. “Opportunities for women.”

As Bialeck reminisced about growing up in Derby, it was obvious that she’s always had spunk.

Bialeck loved sports, and swam and played basketball. She and her friends formed a women’s basketball team, and played against women’s teams from Waterbury and Naugatuck.

She said that back then she was almost 5 foot 9, and her friends were tall, too. “We played against the factory girls. We never swore,” she said, but she recalled that one team cursed freely. “Those girls said, ‘Let’s knock the hell out of those little s*#%heads,’” Bialeck recalled, laughing. And after that, she said she and her friends adopted that nickname for themselves.

Bialeck went to college at the University of New Haven, where she joined a sorority. She stayed four years so she could get a job, and then became a teacher in Milford, where she taught first grade at Walnut Beach Grammar School for more than 50 years. She went back to work a few years after having her children, which is something that rarely happened at the time.

It was an “interesting group,” Bialeck said of some of her early classes. During the depression, she said, many well-educated and formerly wealthy people moved to “poor housing” in the Milford beach community where she taught. They were children of opera singer, writers for the New York Times, but they were poor.

She had 50 students in her classroom. The “matron” would make them a big pot of soup for lunch.

Bialeck met her husband, Raymond, when she attended a sorority dance at the Bond Hotel in Hartford.

They married when she was 23 and moved to Hartford. He was also a teacher for many years, at Northeast Junior High in Hartford, and was a charter member of the Hartford Federation of Teachers. He died in 2000.

Bialeck has three children: Richard, who also became a teacher and taught for more than 34 years at Quirk Middle School in Hartford; Alan, a now-retired lawyer; and Janet, who retired after working for about 50 years at the St. Francis Hospital Laundry. Janet was one of the first developmentally disabled people in the area to join the workforce.

The care and treatment of the handicapped and those with special needs, Bialeck said, is also something that has been a major transformation in her lifetime.

Janet attended Mansfield Training School, but wasn’t thriving there. The experience prompted Bialeck and her husband to become active participants in the formation of the Jewish Association for Community Living (JCL), which is now in its 36thyear of supporting adults of all faiths with intellectual disabilities. When JCL was formed in there early 1980s there were just 50 group homes in the state, and  850 group homes throughout the state. 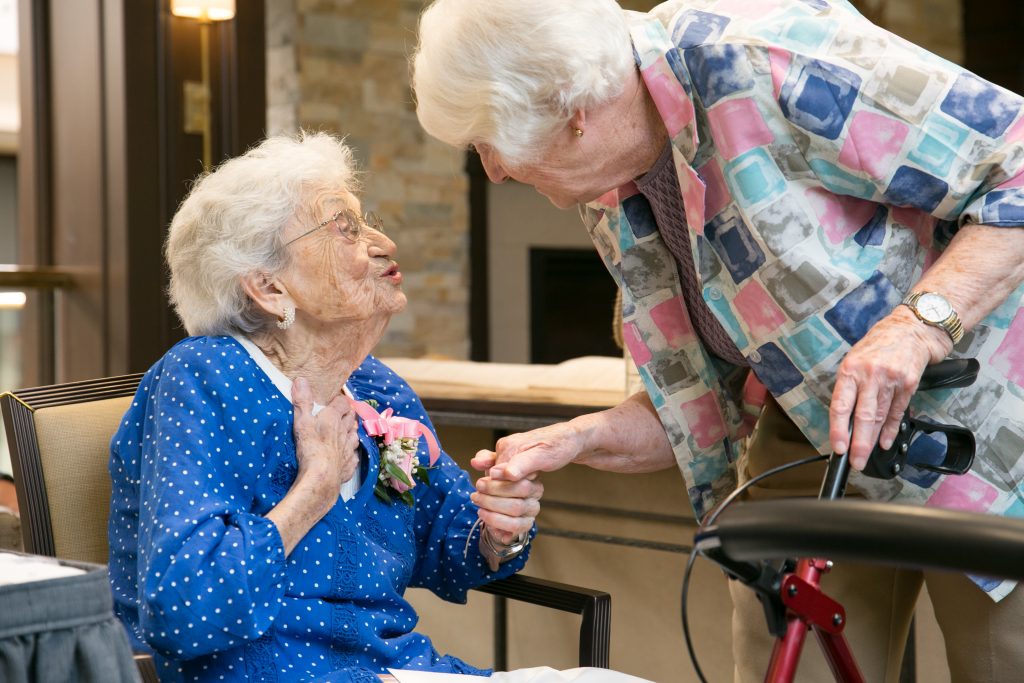 These days Bialeck spends her time knitting, and enjoys sitting among the flowers in the sun in the McAuley’s greenhouse.

Bialeck said she used to enjoy being outdoors, and had a big garden in the backyard of the home on Overhill Road in West Hartford that she and Raymond bought in 1969. Her son Alan owns the home now, and said that his mother would come and turn over the garden every spring until she was about 86.

An early composter, Bialeck said she would use “clean garbage” and fish heads from a friend’s shop on Albany Avenue to fertilize her garden, where she grew cauliflower, broccoli, lettuce, beans, tomatoes, zucchini, onions, garlic, and peas.

She does regret that she can’t really read anymore because of poor vision, and said she has resisted listening to books as an alternative because it’s “not really reading.”

Bialeck now has five great grandchildren, ranging in age from 4½ to 9. “They’re the best, the smartest,” she said.

When asked if she feels her age, Bialeck threw that question right back, responding with: “Do you?”

Then she laughed. “Now that I stop and look, I am surprised that I don’t have more wrinkles,” she said. “I’m not saying I look young.”

Her favorite food? “Everything,” she said.

Alan and Richard said their mother’s days are full, and she’s interested in what people are doing, what they think, and current events.

“I’m glad for what I have,” Bialeck said.

“I just wake up every day and do what I have to do.”