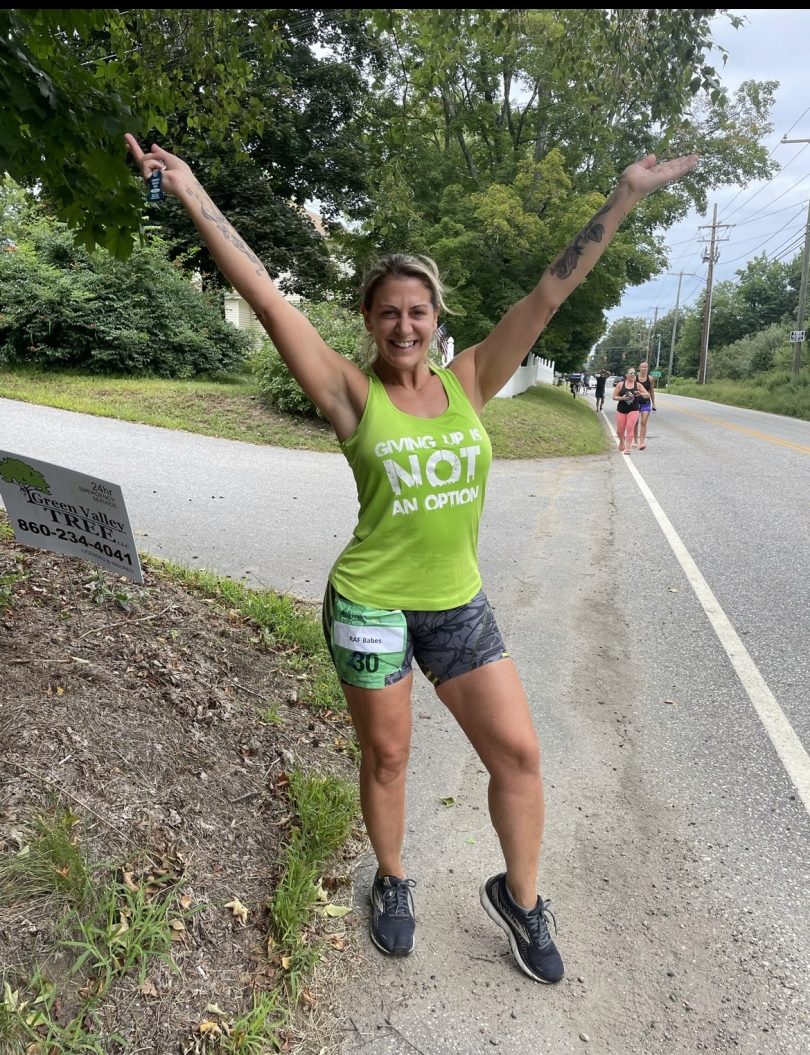 Racquel Lunser’s ‘power’ is her dedication to inspiring others, and she has been named to represent the 2022 Inspiration Team for the Hartford Marathon and Half Marathon. 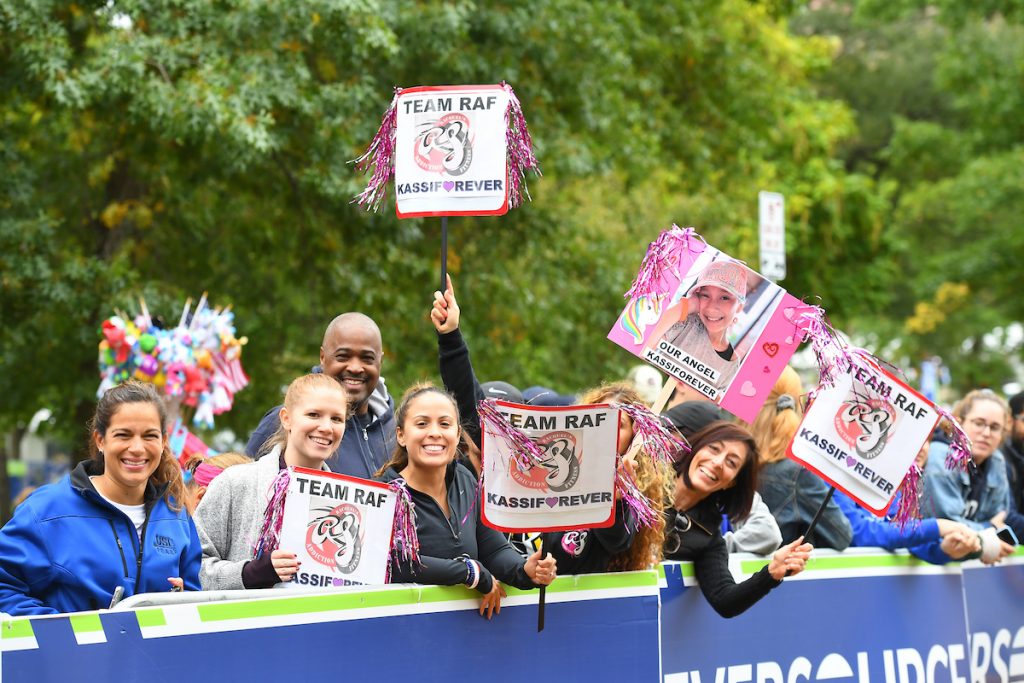 To say Racquel Lunser’s life is busy would be a major understatement, but she never hesitates to help others improve their health and find their inner power and strength, and her efforts have earned her a spot on the Hartford Marathon Foundation’s 2022 Inspiration Team.

Lunser, who lives in West Hartford, works full-time as a social worker at a skilled nursing facility in Simsbury, leads an outdoor bootcamp program year round, and before and after work she teaches a variety of HIIT (high-intensity interval training) classes at Racquel’s Addiction Fitness – the studio she started in 2011. The single mother of a 12-year-old boy also finds time to take her son, a seventh-grader at Sedgwick Middle School, to myriad practices and games throughout the country for his AAU basketball and football teams. 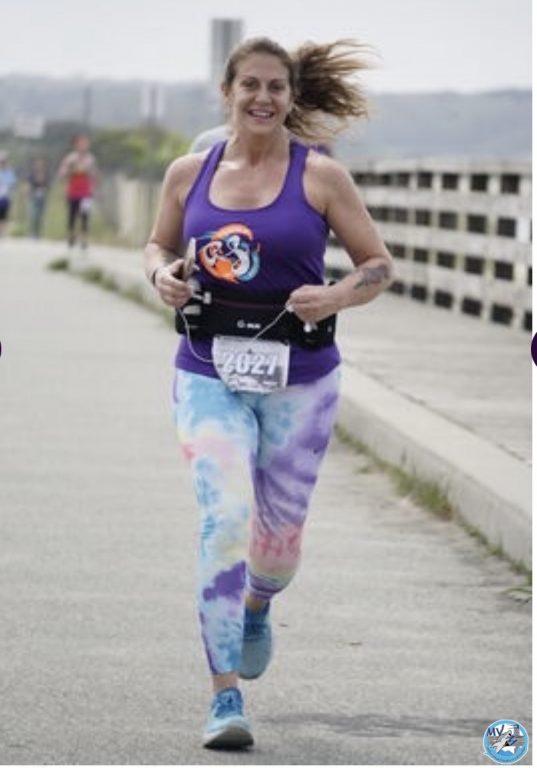 Lunser believes that fitness is for everyone, and every year she inspires many of her bootcamp participants and studio members – anywhere from 20 to 50 people per year – to participate in one of the Hartford Marathon races. Some of those participants nominated her for the Inspiration Team.

She’s been a social worker, and a fitness inspiration, for 25 years, transforming the lives of many people who have found their own strength and resilience, and have gone from saying “I can’t” to “I can and I will.”

“We decided we really wanted to highlight people who don’t win the race but have inspiring stories to tell,” Shluger said. “The people who inspire you to do hard things in your own life.” They were looking for nominees who had inspired people to run a marathon, to lose a significant amount of weight, to just put one foot in front of the other to start a transformation of their lives. 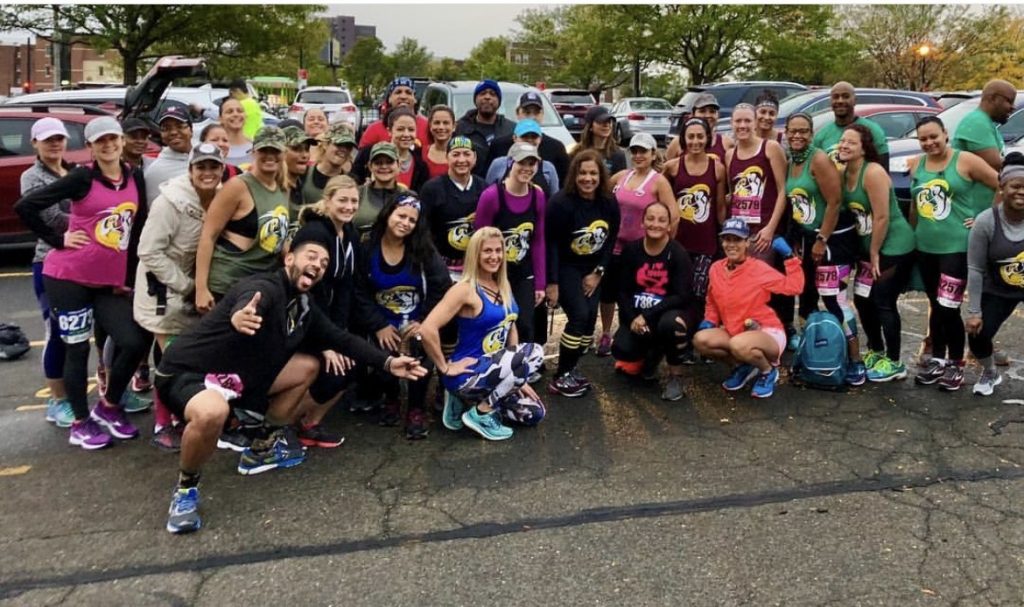 In the 2018 HMF Team RAF had eight relay teams and a lot more runners in 5K, half and full marathon. There were even two pregnant runners. Photo courtesy of Racquel Lunser

There were hundreds of nominations this year, Shluger said. “Of all the entries we got, we selected 12 participants that really epitomize the power within themselves.”

Lunser had been teaching fitness classes at other studios in the Hartford area, but in 2011 decided to take the leap and open her own studio. Her father had just died, and her son was only a year old, but she said she decided, “It’s time to start helping to change other people’s lives.” 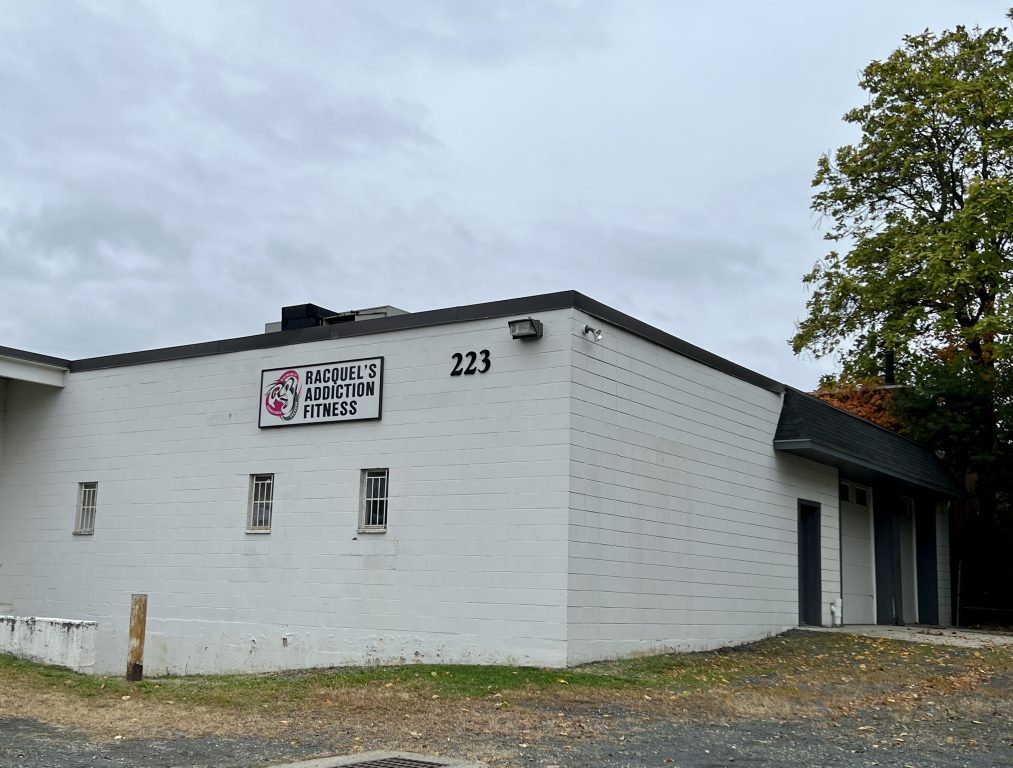 More than 20 years ago, long before “bootcamp” was a popular fitness trend, and long before fitness moved outdoors due to the pandemic, Lunser started an outdoor bootcamp class for women. They met in a local park, including in the winter.

“It started growing more and more popular,” she said, and the eight-week sessions soon expanded from five to 50 people. They continue to be outdoors, rain or shine, in parks throughout the Hartford area. “There’s no excuse,” she said.

“I always bring a lot of running into the bootcamp. You need cardio,” said Lunser. The running starts off in short intervals, but by the end of an eight-week session, most are physically ready to join “Team RAF” and do at least a 5K. They’re already used to exercising outside in all types of weather, too. 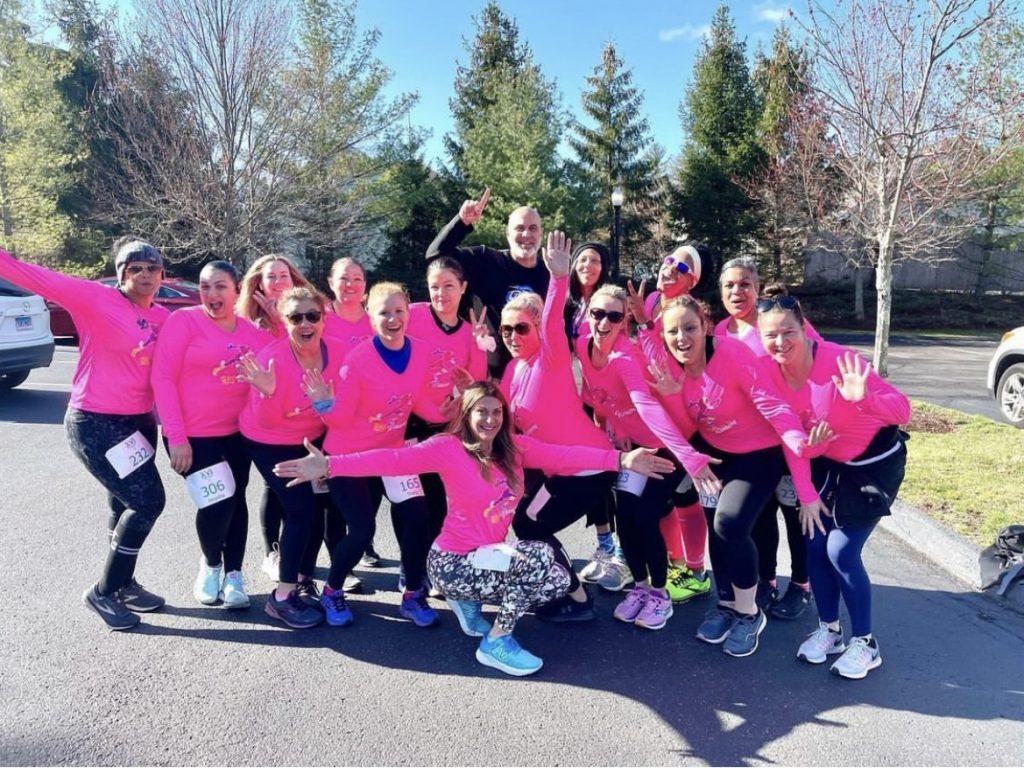 Her programs incorporate weights, running, and nutrition as well. “They all go hand-in-hand,” she said.

“Running helps people with their mood,” said Lunser. “It helps you heal.” Running helps with anxiety, depression, and self-esteem, she added.

“Runners, we’re all united by that inner culture when we run,” Lunser said. This year’s theme for the Inspiration Team is “What Powers You?” and Lunser not only has found her own power, but she’s used it to power others.

She encourages bootcamp participants and other members of her studio to participate in whatever length race they are comfortable with. “We’ve had people running their first marathon, first half marathon,” she said, as well as their first 5K. “So many start [with the bootcamp] and say they hate running, but after they do bootcamp they see they can do everything.”

All of the activities engaged in by “Team RAF” involve friendship and laughter, too.

“One of the things that’s great about running is it’s always there,” Lunser said. It’s always accessible, and most of the time only requires lacing up sneakers and heading out the door. 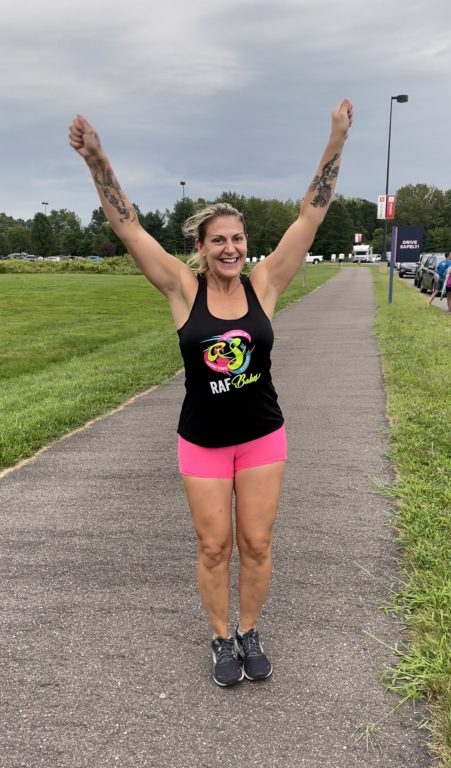 People could continue to run during the pandemic, and because the sessions were outdoors, the outdoor bootcamp sessions were even more popular than ever.

Lunser ran her first half marathon in 2010. Her son was a baby. She encouraged a friend to join her in the training, and said she didn’t care if they “walked or crawled across the finish line.” Running a half marathon then became an annual thing, and she’s also participated in the Hartford Marathon Relay – which is what she will be doing this year.

She’s running the first leg of the relay so she can do what she also loves – stand at the finish line, cheering on Team RAF like a proud mom. 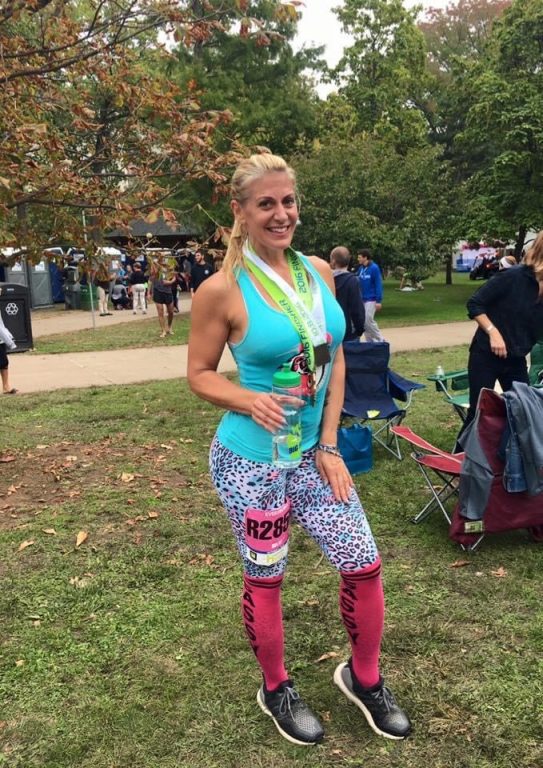 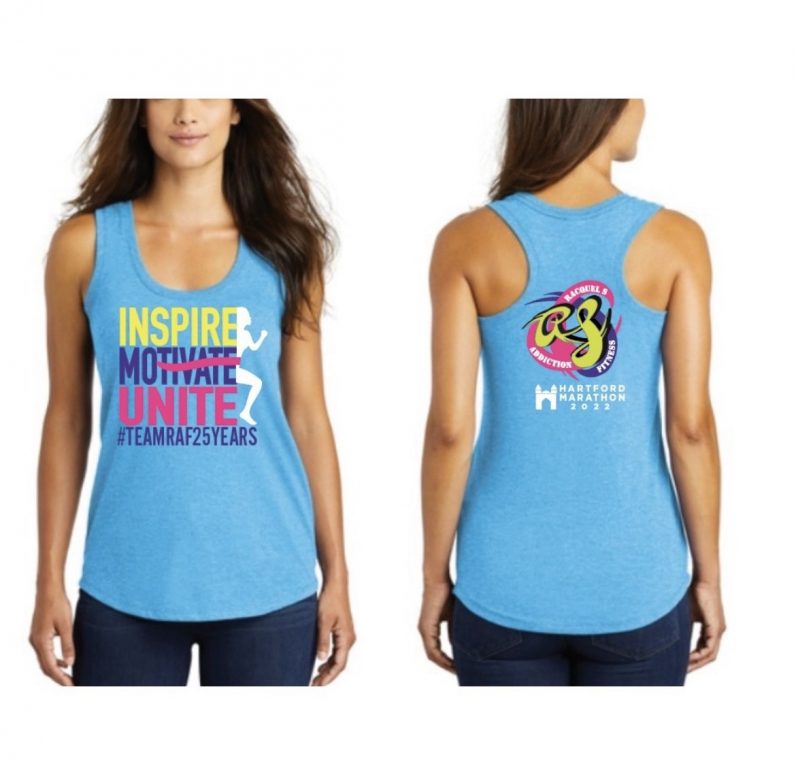 Shirts that Team RAF will be wearing in the 2022 Hartford Marathon events. Courtesy of Racquel Lunser

“We want them to inspire you,” Shluger said of the Inspiration Team.

The stories of those who were chosen for 2022 Inspiration Team are varied, but all are inspiring. Shluger said one person weighed 350 pounds and lost 200 pounds on her own, making small and incremental changes every day. She lost 100 pounds before she even started exercising. “She didn’t lean on anybody but her own power and determination,” Shluger said. Others were working through tragedy.

In addition to Lunser, 2022 Inspiration Team members include:

Shluger said she is thrilled to have the half marathon course return to West Hartford. In 2020 the entire race was virtual, and in 2021 they had to cap the number of entrants and the only way HMF could afford to stage the race was to have both the marathon and half marathon on the same course.

“This year we’re back to our traditional course,” Shluger said. “There are lots of excited neighbors who are back to having parties and cheering on runners.”

About 8,000 runners are expected to participate in the marathon, marathon relay, half marathon, and 5K events. There are also approximately 2,000 volunteers – who are also 2022 Team Inspiration members, Shluger said.

For more information about the event –including registration, packet pick-up, and cheer zones – visit the Eversource Hartford Marathon and Half Marathon website.

For more information about Racquel’s Addiction Fitness and the programs she organizes, visit the website.