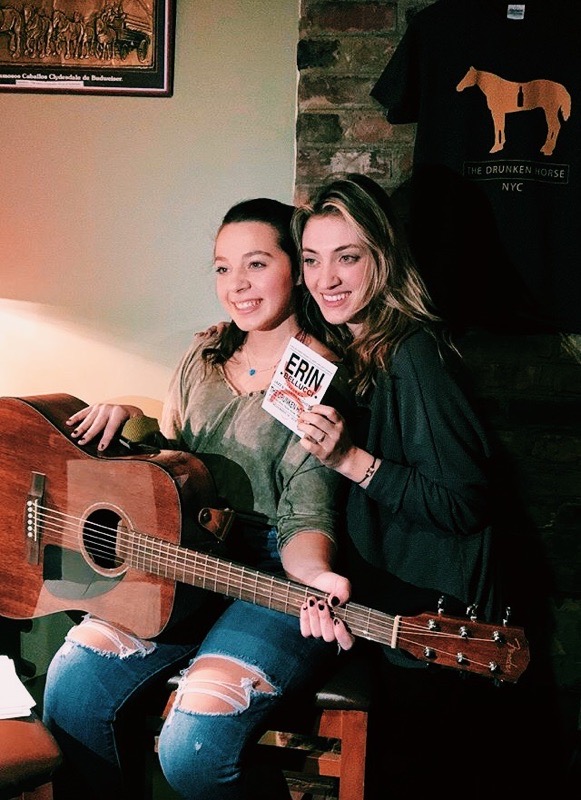 Erin Bellucci, a Hall High School graduate and former kicker for the football team, now a junior at the University of Delaware, suddenly found herself singing live for Michael Bublé at Madison Square Garden on Wednesday night. [Updated]

This story may well end up being a flashback at some point in the future, as a singing sensation retells the moment when she was “discovered.”

When she and her sister, Allison, arrived at the concert they had no idea Erin would be performing.

“It wasn’t planned,” Erin said early Thursday morning in a phone interview from Allison’s New York apartment, still giddy with excitement and admitting she really hadn’t even slept since her performance the night before.

During the concert Bublé started talking about songs that people like to sing in the shower, engaging the audience. Seated in the front row, Allison was jumping up and down asking him to let Erin sing. And Erin was raising her hand and jumping up and down as well, when Bublé came over with the microphone.

Even without the chance to sing for Bublé, Wednesday was shaping up to be an exciting night for the Bellucci sisters.

Erin, a junior at the University of Delaware who is majoring in music education, told the story of how she even came to attend the Michael Bublé concert.

Erin said that she was on her way home to West Hartford for Thanksgiving break last fall when her sister presented her with an opportunity. Allison, a 2013 Hall graduate, works in public relations in New York and one of her clients, The Drunken Horse (a wine bar/restaurant in New York City), was looking for someone to sing live. Allison volunteered her sister.

“Singing is what I love to do,” said Erin, a veteran of Hall’s notable Pops ‘N Jazz shows and a singer with the University of Delaware Jazz Band and the Golden Blues a capella group.

Erin sang, and people were dancing, and it was a great night, she recalled. Then a woman seated at one of the tables in the front came up to her. “She said, ‘Hey, we’re coming back to the city in February. You should come see one of our shows,'” Erin recalled.

The woman handed her a card – which indicated that she was Michael Bublé’s executive stylist.

“She was this incredible person, and she said to just email her the week before and she would give us tickets,” said Erin.

Allison sent the email last week, and sure enough was told that the tickets would be at the box office.

“That’s all the info we had,” said Erin. She told her professors that she would be missing some classes for the chance to see Michael Bublé in concert, but didn’t even have to do that because it was a snow day.

Erin took the train to New York, already buzzing with excitement, and when they went to the box office at Madison Square Garden found themselves with front row seats. “Allie and I were just beside ourselves,” she said.

She’s been a fan of Bublé since elementary school. It was an amazing performance, and she said they were both crying as they listened and took in the whole experience.

And that’s when Bublé started asking if anyone in the audience had a song they liked to sing in the shower.

“My sister was screaming and raising her hand. ‘My sister sings in the shower,'” she said. Erin said she started jumping up and down, too.

Bublé came over, and asked Erin what her shower song was.

He asked her her name, and then he announced it, handed her the microphone, and she started singing.

“I was stammering, but then I heard the music,” she said. “I’ve sung that song so many times, they had the piano ready to go, and I knew I had about 30 seconds to sell myself.”

As Erin belted out an amazing rendition of Etta James’ 1960 jazz classic, the crowd roared with applause, Bublé was smiling, and in what could have been “A Star is Born” type moment, he said, “That was so beautiful. That may not be your last time here. That was incredible. Too incredible if you ask me … Did you check that out, this is the truth, this is not some set up thing …”

The woman who had given Erin and Allison the tickets was backstage. She was shocked when she heard Erin’s voice.

“She told me after that she heard a girl singing and said to herself, ‘I recognize that voice, that’s Erin Bellucci.'” She had no idea that Erin would get “noticed” by Bublé.

“It was really just a series of incredibly lucky – beyond incredible – events that transpired,” Erin said.

“Last time I was in the city it was incredible to sing, and now I was singing at Madison Square Garden,” she said. 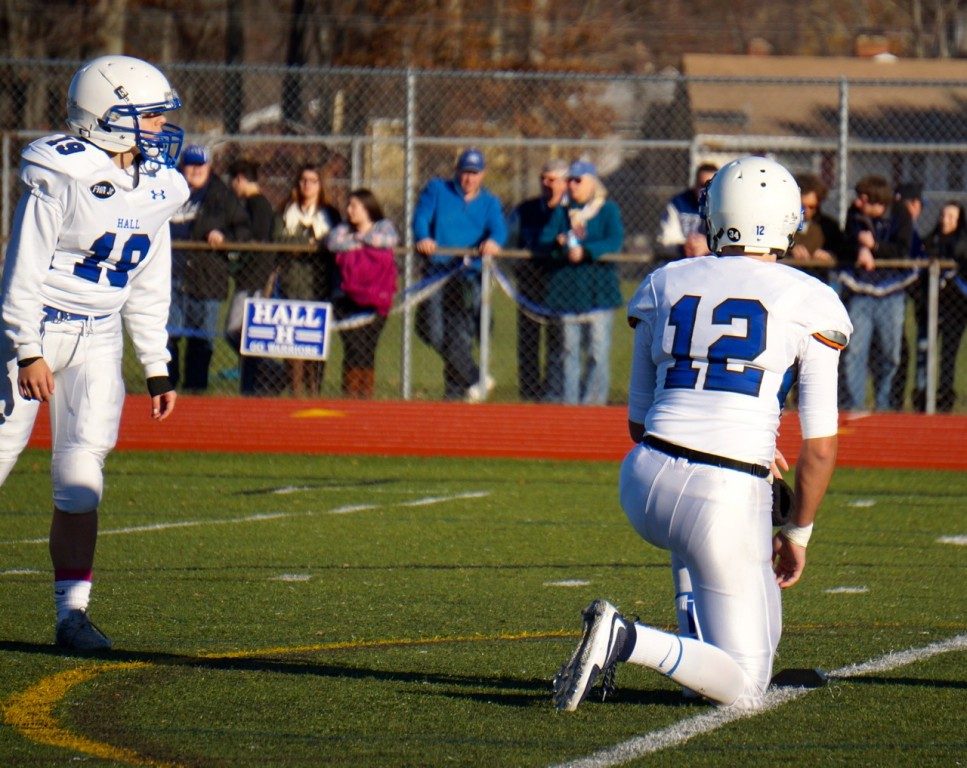 Erin Bellucci, then a senior at Hall High School, prepares to kick an extra point during the Hall vs. Conard football game in November 2015. Photo credit: Ronni Newton

If the name Erin Bellucci sounds familiar for other reasons, she also made headlines as a senior at Hall for her performance on the gridiron – as a very successful kicker for the football team. She was even chosen for the all star game – where she kicked an extra point and sang the National Anthem.

The daughter of Hartford Public High School football coach Harry Bellucci, Erin said that football and singing have been her two passions. “Football taught me a lot about being confident,” she said. But she decided to pursue music in college.

Erin has no idea what will happen next. “I think this is a sign that I really need to put myself out there,” she said. “Michael Bublé …  this is is just incredible.”

And Allison, an intern at Becca PR and the founder of her own business, A Wildflower Project, may have gotten lucky finding a great new client, right in her own family.

Erin also got a shout-out in a Billboard.com re-cap of the concert that mentioned Bublé’s giving “an audience member time to shine with his or her own shower song, picking an eager 21-year-old girl who made for perhaps the biggest surprise of the night with an impressive rendition of Etta James’ ‘At Last.'”