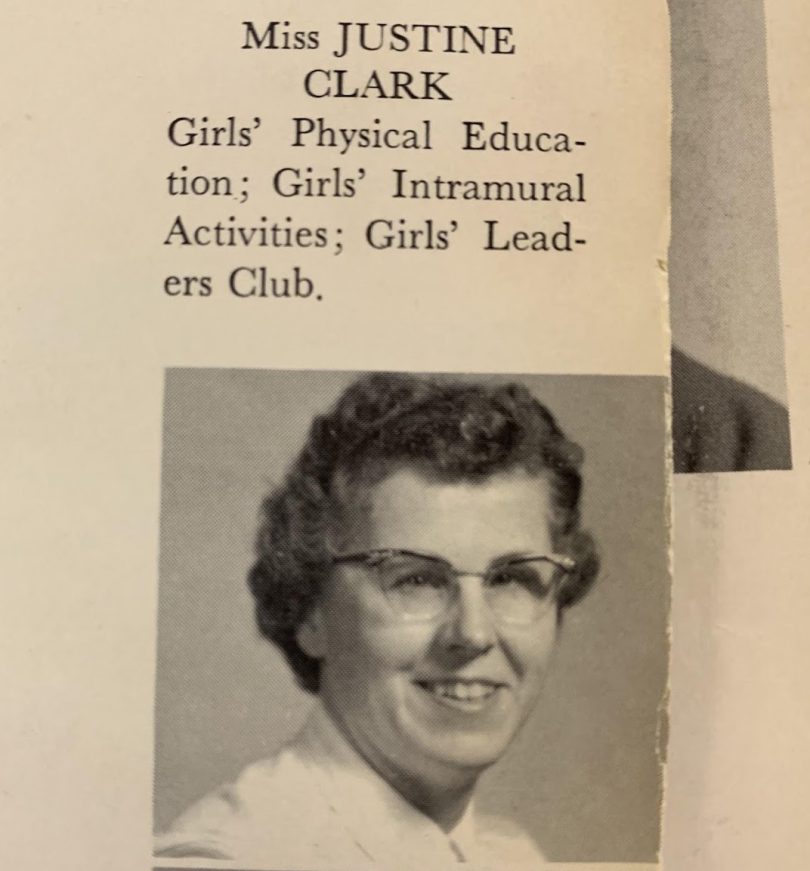 Justine Clark taught girls’ physical education in the West Hartford Public Schools from 1942 to 1977.  She championed women’s athletics in the generation even before Title IX (1972) guaranteed equal access to girls and boys.

Clark graduated from Connecticut College for women in 1942 with a degree in physical education. West Hartford hired her that very year and she taught for 15 years at Hall High School in the center of town. Clark taught P.E. to every girl who went to Hall.

When Conard High School opened in 1957, Clark got the transfer and taught there for 20 more years.

At the same time she taught, she also got girls involved in sports outside of the school day. Clark ran intramurals for tennis, golf, gymnastics, archery, softball, swimming, badminton, basketball, field hockey, volleyball, bowling, and square dancing. Her goal was for “girls to develop socially, mentally, and physically through team play and individual skills and have a source of enjoyment for the present as well as for the future years.” (Pow Wow, September, 1957)

In the 1940s, girls participated in “varsity” sports at the end of the intramural season with three to 10 games scheduled with other towns.

Field hockey and basketball games were played against one or two out of town teams each year including Agawam, Farmington, American School for the Deaf, Weaver, and Manchester.

Clark knew the power of sports in her own life; she loved tennis, golf, cross country skiing, and dancing. And, as a girls’ physical education teacher in West Hartford, she passed along the joy of all that sports added to life: competition, leadership, movement, rule following, creativity, and team play.

Starting in 1947, she ran leagues through the town’s Recreation Department. She ran the girls’ leagues in numerous sports until the early 1950s, when they were taken over by a male coach.

Clark advocated at the state level for girls in sports. In 1947, Clark sat on a panel called “Standards in Girls” in competitive athletics at the CIAC’s State Convention. She was joined by the associate director of the New Haven YWCA, a professor at the State Teachers College in Danbury (now Western Connecticut State University) and a P.E. teacher from Hartford High. They reached a consensus that providing competition for the highly skilled player was a real need but could not agree on how to implement a program. The CIAC agreed to hold four basketball clinics in each of the CIAC regions.

After 30 years of teaching, Title IX changed her workplace. Boys and girls took physical education together. Coaches got paid for coaching girls’ sports. Coach Pam Moffo fondly remembers Clark as a mentor and as her assistant coach in field hockey in those first years. Clark mentored the young women who came to teach at Conard in the 1970s.

When she retired in 1977, P.E. teachers and coaches established the Justine Clark Award given each year to a female athlete who was sensitive to teammates, dedicated to the team and to the athletic program.

Clark retired after 35 years of teaching. She was a model for retirees who stayed active. She played tennis and golf (into her 90s) and participated in the Senior Olympics. She was a lifelong sports enthusiast.

Her joy in sport should be remembered by future generations in West Hartford. I propose naming the Conard High School Tennis Courts for Justine Clark. A plaque with her name can be posted and an accompanying tabletop historical sign can tell her story.