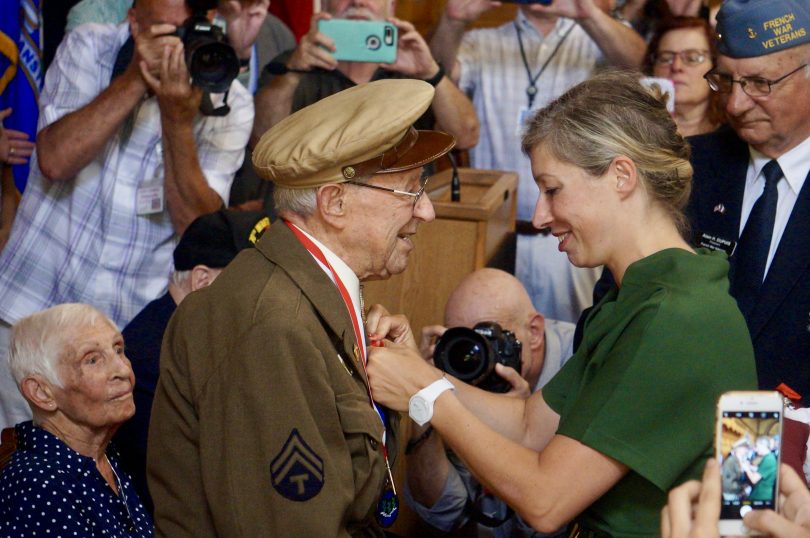 Ben Cooper and Francis King, two World War II veterans from West Hartford, were among five Connecticut residents who received the ‘Légion d’Honneur’ from the French Consul General Tuesday in a ceremony at the State Capitol. 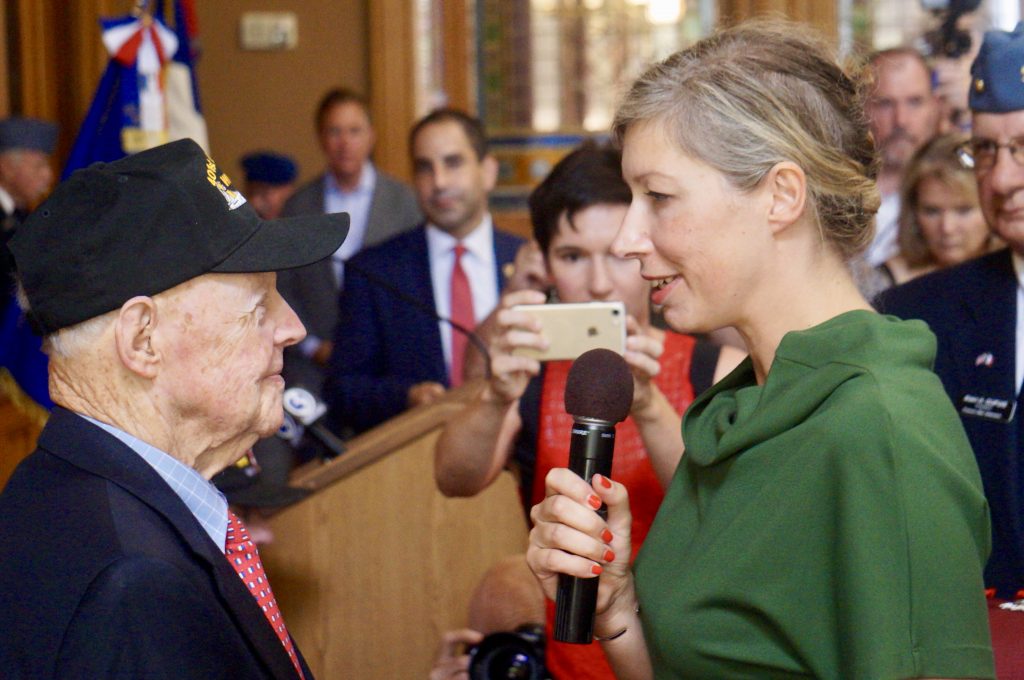 French Consul General Anne-Claire Legendre speaks with Fran King of West Hartford as she presents him with the Knight of the Legion of Honor Medal. Photo credit: Ronni Newton

Fran King was still a teenager, and Ben Cooper was just 20 when, as part of the “Greatest Generation” they began serving the U.S. and supporting the Allied efforts in World War II.

The U.S. and French national anthems played and the French flag flew over the State Capitol building Tuesday as a standing room-only crowd watched in the Old Judiciary Room as French Consul General Anne-Claire Legendre presented the prestigious French Legion of Honor medal to four men and one woman from Connecticut.

The two West Hartford men were among the five presented with France’s highest honor, an award given to living veterans who risked their lives during World War II and who fought on French territory. The Legion of Honor award itself dates back to 1802 when it was first awarded by Napoleon Bonaparte.

King, 94, a West Hartford resident since 1967, was a staff sergeant in the U.S. Army Air Corps, a tail gunner who flew 35 missions in Europe, serving in France, Belgium, England and elsewhere in Europe. The recipient of six air medals, he later became an instructor and remained on active duty until 1945.

Cooper, 97, a lifelong West Hartford resident, was a combat medic, a member of the General George Patton’s U.S. Army 45th Infantry Division serving on the front lines in France and Germany. He was among those who, on April 29, 1945, liberated the Dachau concentration camp in Germany, and prior to that he also helped liberate and treat 200 captive American soldiers.

For more than 30 years, Cooper has made it his mission to speak to countless groups of students, civic leaders, and other veterans about the Holocaust as well as his service in WWII and the struggle to preserve freedom for all. He has also established a community discussion for veterans, Roll Call, which meets at the West Hartford Senior Center and gives veterans from all branches the opportunity to share their stories.

Wayne Rioux, a veteran’s liaison with Hartford HealthCare at Home who conducts support sessions at the Elmwood Community Center and supports veterans throughout the state, applied to the French Consul for the honor on behalf of the five Connecticut veterans. The application was researched by the Ministry of Defense, and approved and awarded by French President Emanuel Macron.

In addition to Cooper and King, the other honorees included Robert Freeburger, a captain and motor transport officer, Elsie Schultz-Thomson, a nurse whose hospital had a survival rate of 96 percent, and John Horan, a machine gunner who was captured and spent four months as a POW in the Gruen and Bilfinger labor camp before escaping at the end of the war.

Gov. Ned Lamont, beginning his address to the audience in French, said that despite some of the “noise” coming from Washington today, the people in this room “worship our shared values and work of our friends the French, and that’s why we’re here today.”

“The men and women being honored today have a diverse range of experiences … but basically represent that greatest of generations, that saved not only the United States but France, Europe, countries across the globe from the oppression of Nazi Germany, Imperial Japan, and their allies,” said Commissioner of Veterans Affairs Thomas Saadi. “I thank each of these veterans here today for their service. We as a society could learn lessons of dedication and perseverance, rather than indulgence and instant gratification, from these men and women …”

Mayor Shari Cantor also spoke, acknowledging the hard work of Rioux to make Tuesday’s ceremony possible.  She urged everyone to spend time with these heroes, to listen to their stories.

“Today we are here to honor and to recognize five outstanding men and women,” said Legendre.

One-by-one, she summarized their varied contributions.

“These stories are really compelling examples of bravery … you risked your life to help men and women that you never met,” Legendre said. “Today we bestow upon you the highest military distinction of my country, the Legion of Honor,” she said, which is given to exceptional men and women.

Guy Wildenstein, president of the American Society of the French Legion of Honor, also addressed the audience and recipients, noting that the occasion was a celebration of French-American friendship.

“Today we are gathered here to honor you but also to remember your fallen comrades, those who made the ultimate sacrifice … I would like to ask you all to never forget,” Wildenstein said, adding that we owe our freedom to the men and women of this greatest generation.

Senators Richard Blumenthal and Chris Murphy were both in Washington, but sent representatives from their offices who presented certificates of recognition to the five veterans.

Laurie St. John, on behalf of Hartford HealthCare, also expressed her thanks to the French for bestowing the award, and to the veterans for their service.

Following the ceremony, honorees and their families enjoyed a reception in the North Lobby of the Capitol, where French champagne and pastries, as well as coffee and tea, were served. 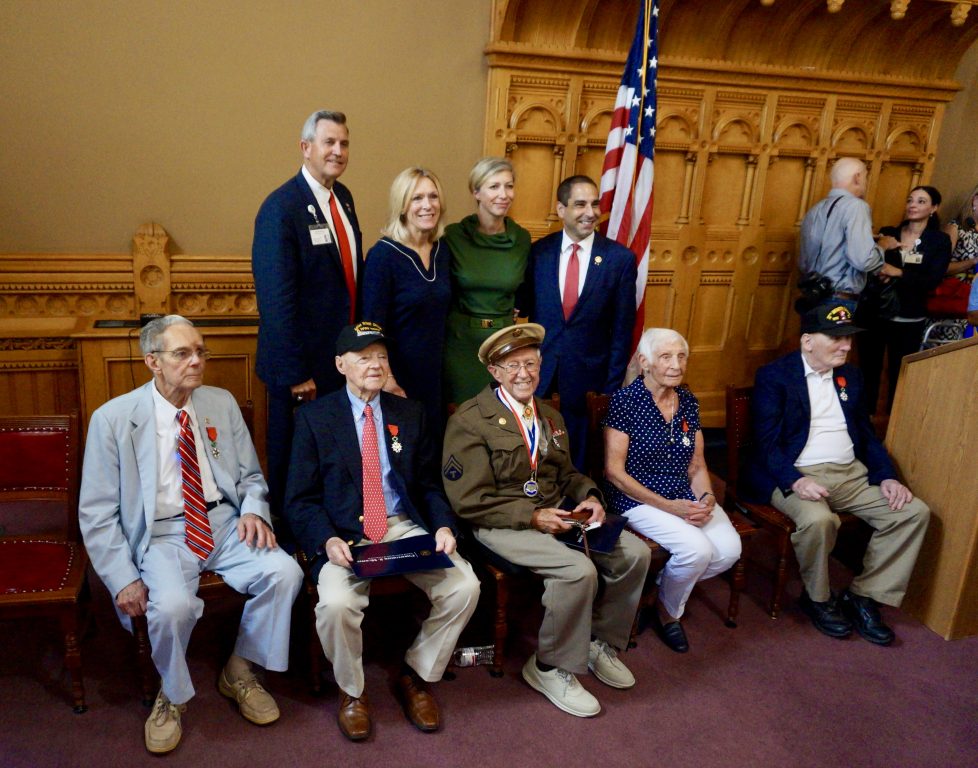 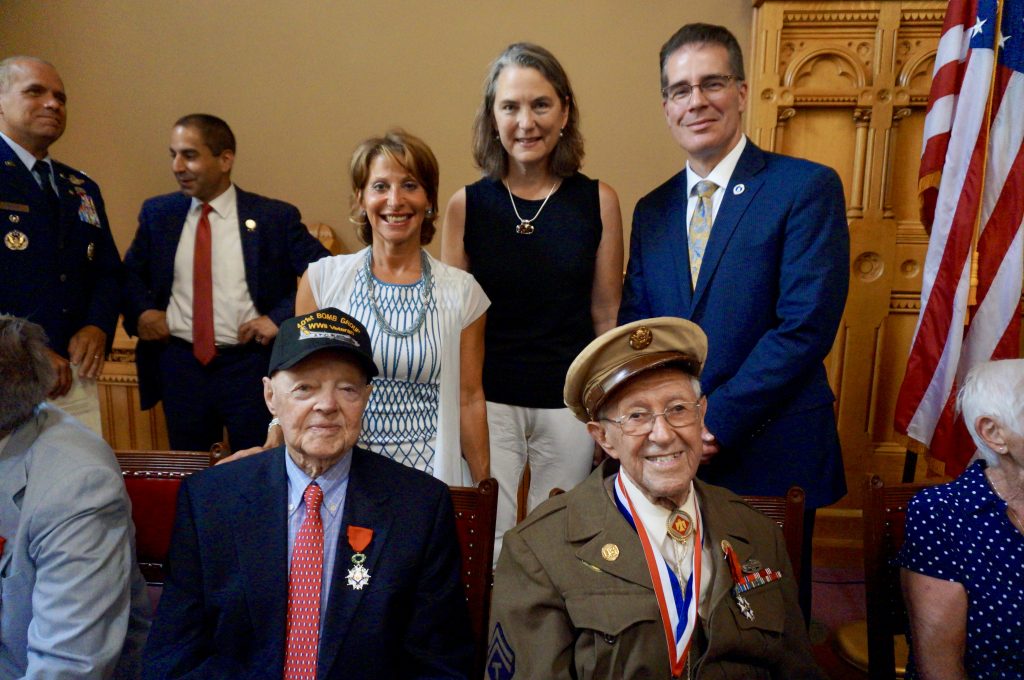 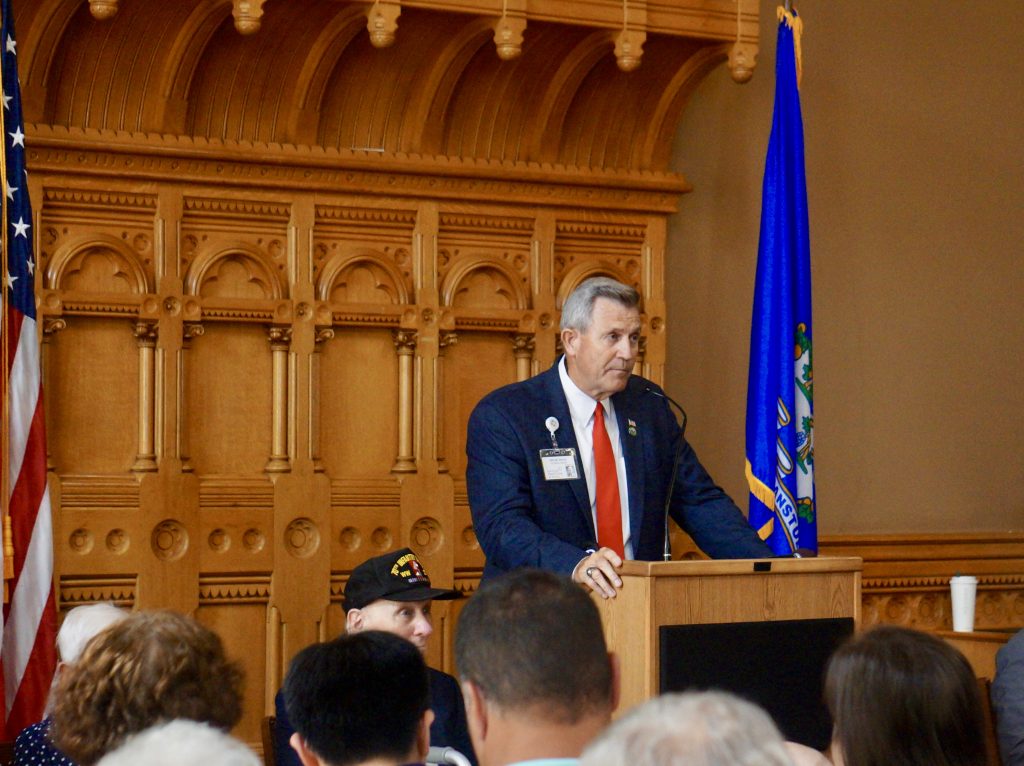 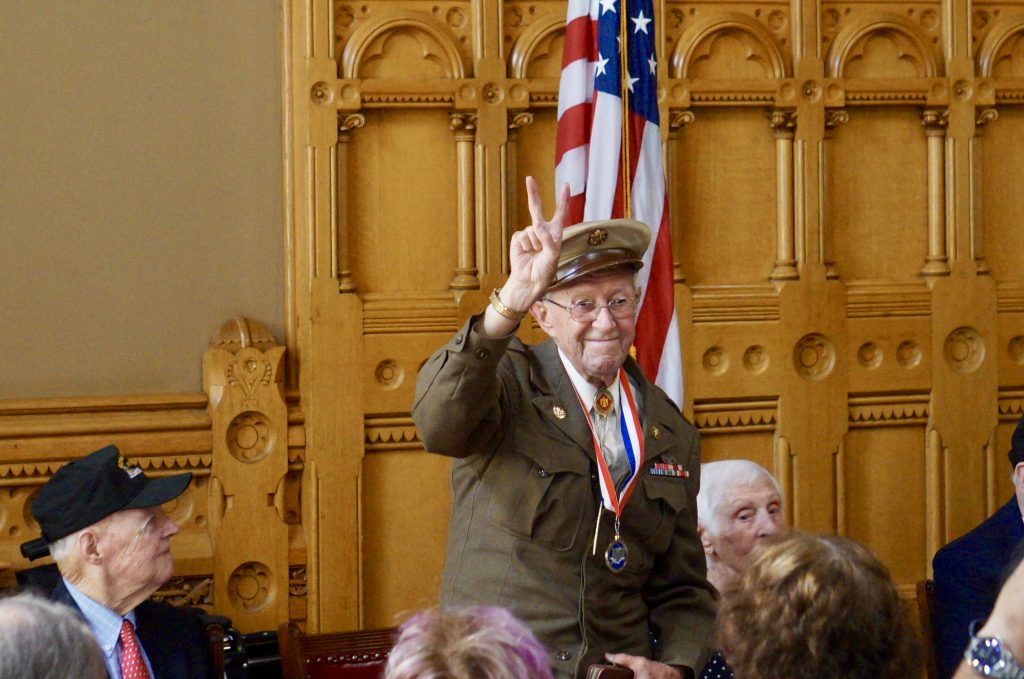 World War II veteran Ben Cooper gives the “V” for victory sign as he is introduced at the Legion of Honor ceremony Tuesday at the State Capitol. Photo credit: Ronni Newton 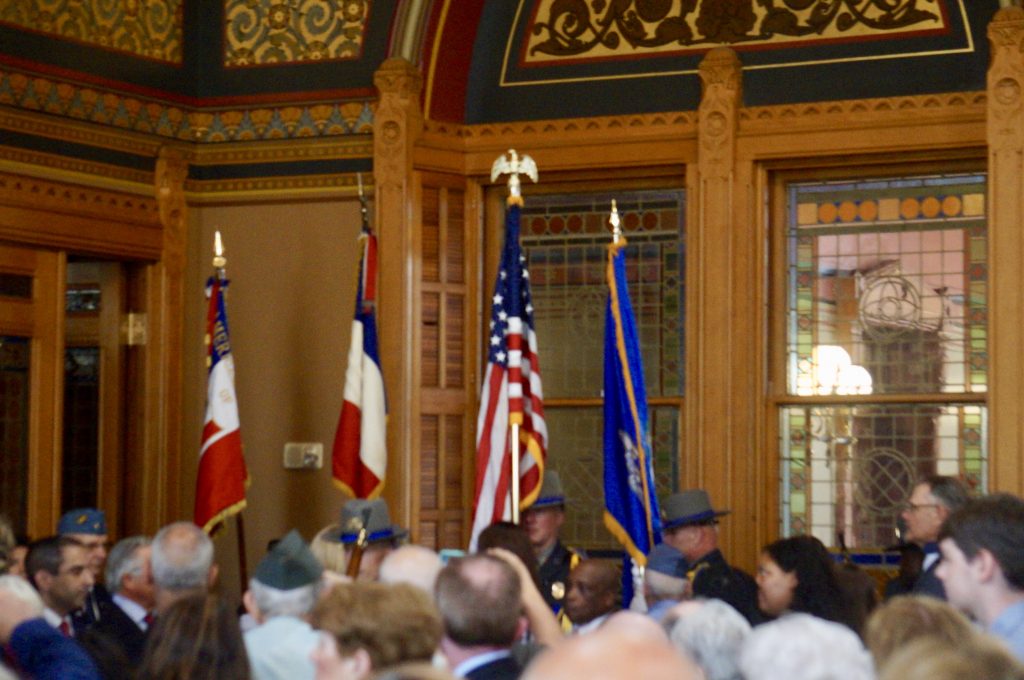 Flags of France, the Legion of Honor, the United States, and the State of Connecticut. Photo credit: Ronni Newton 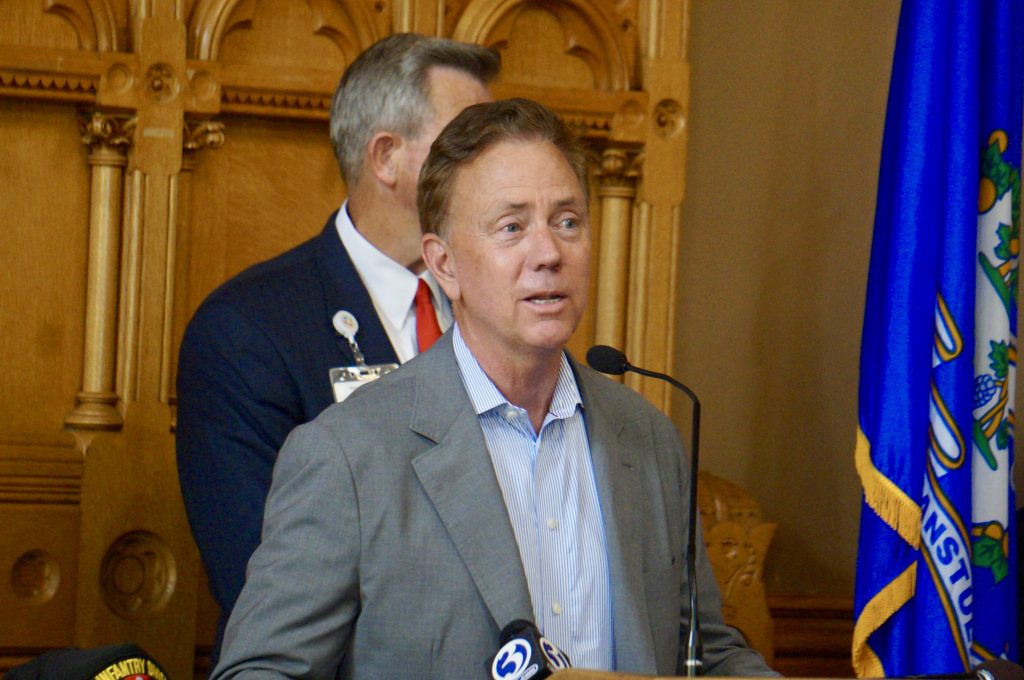 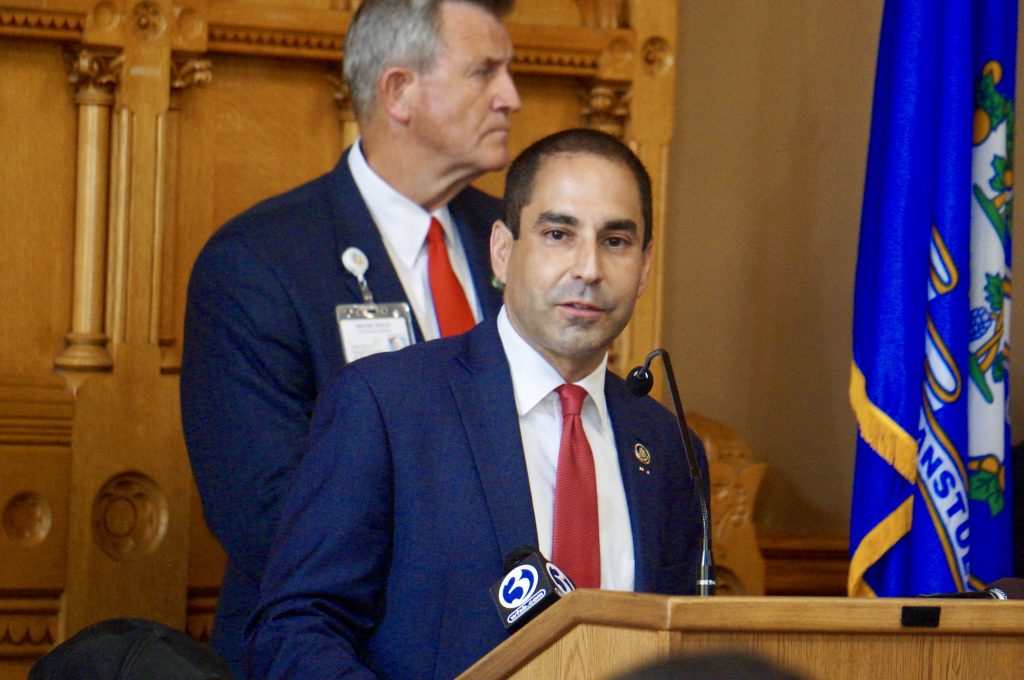 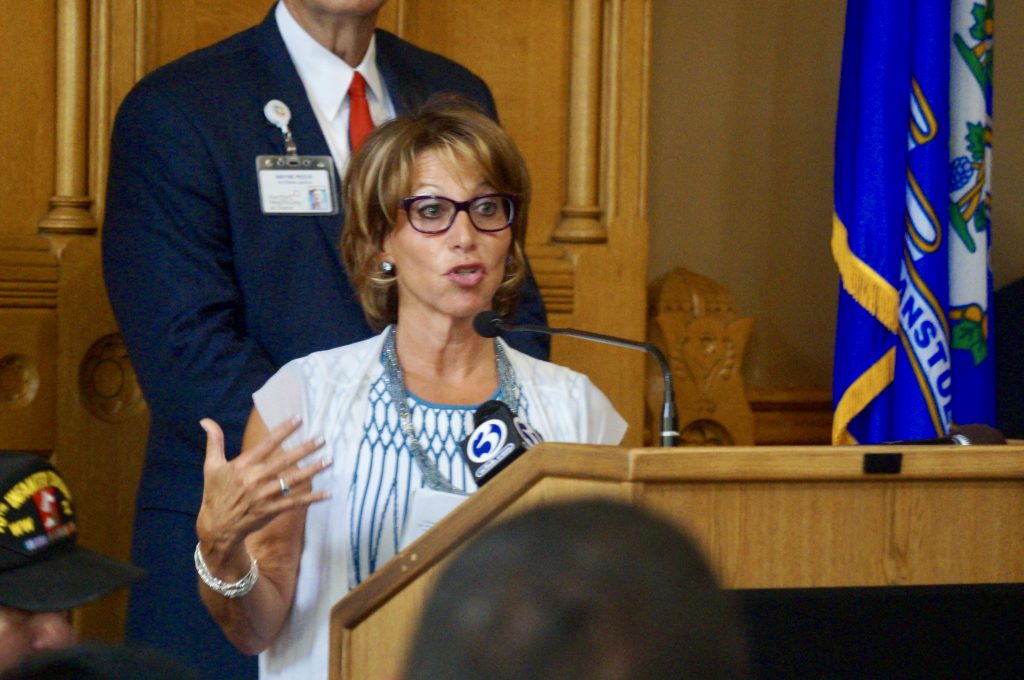 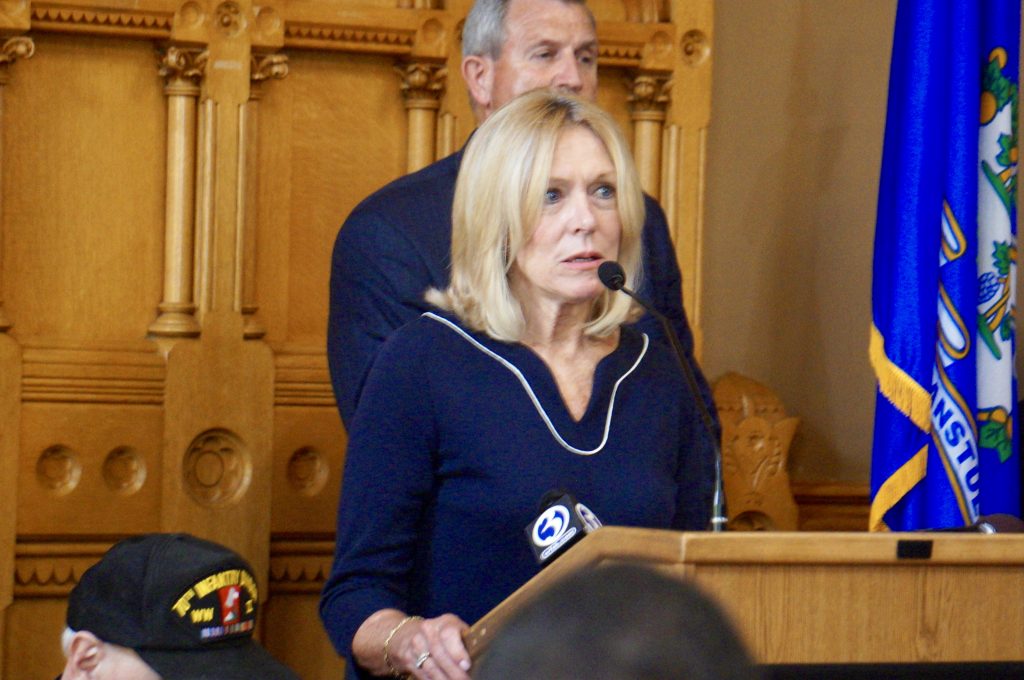 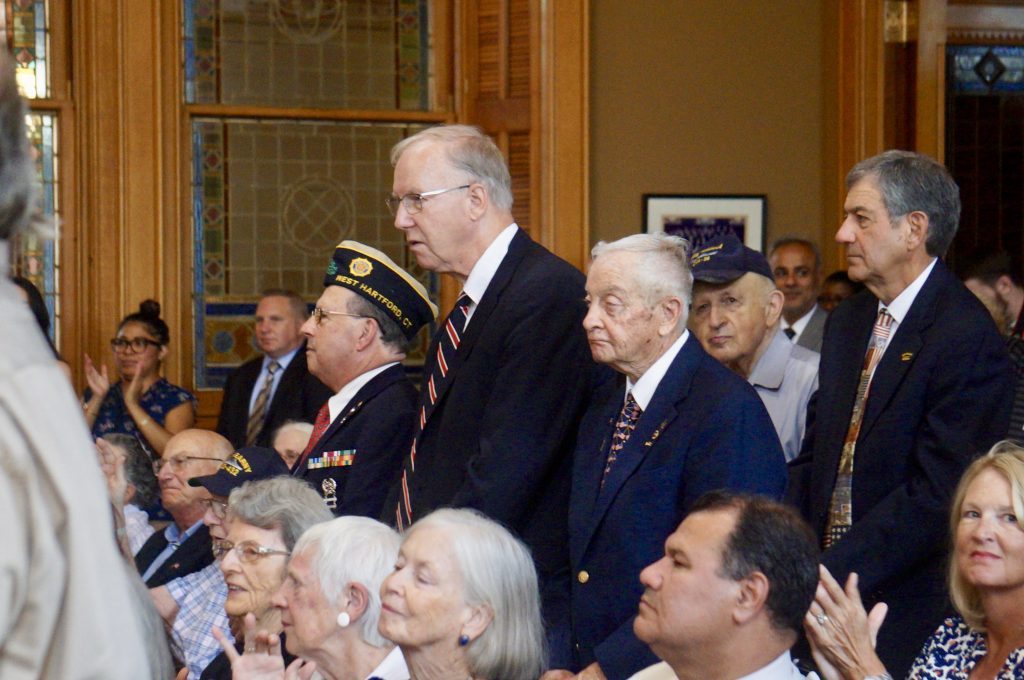 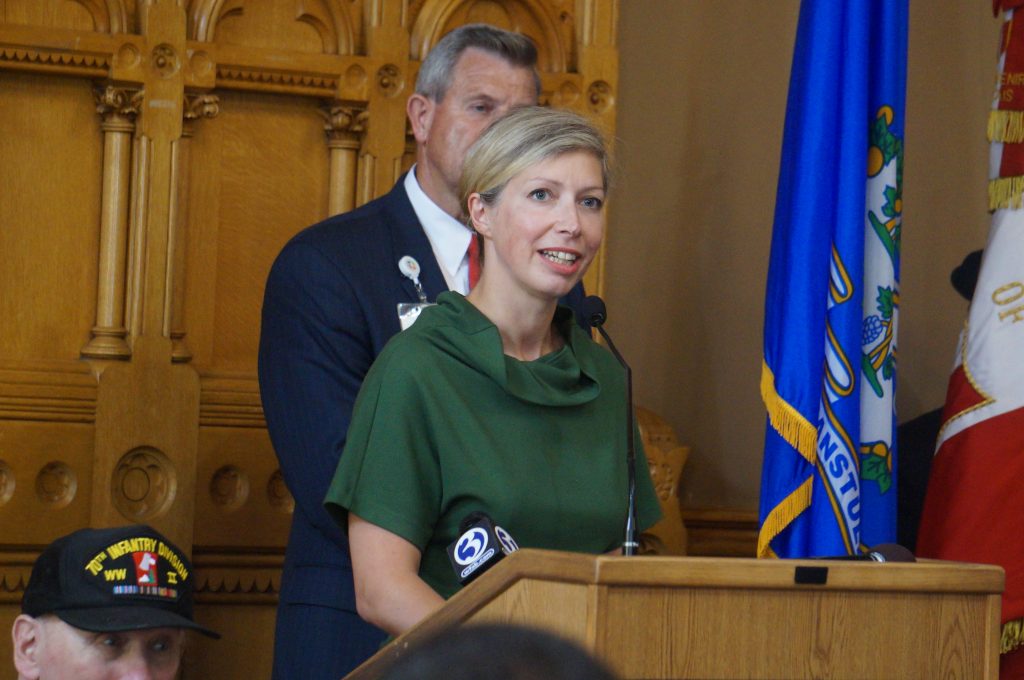 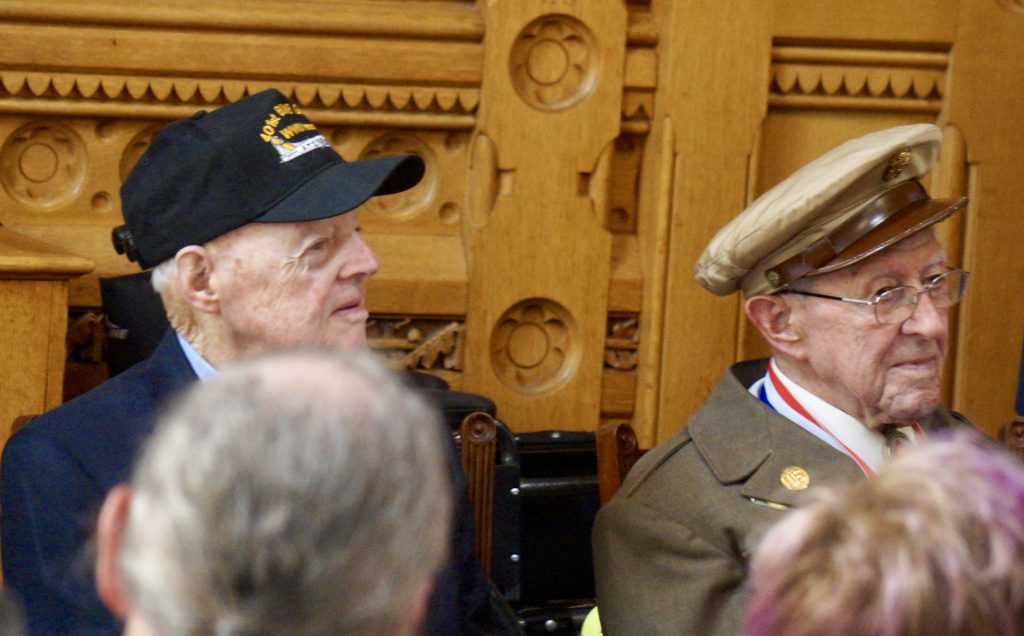 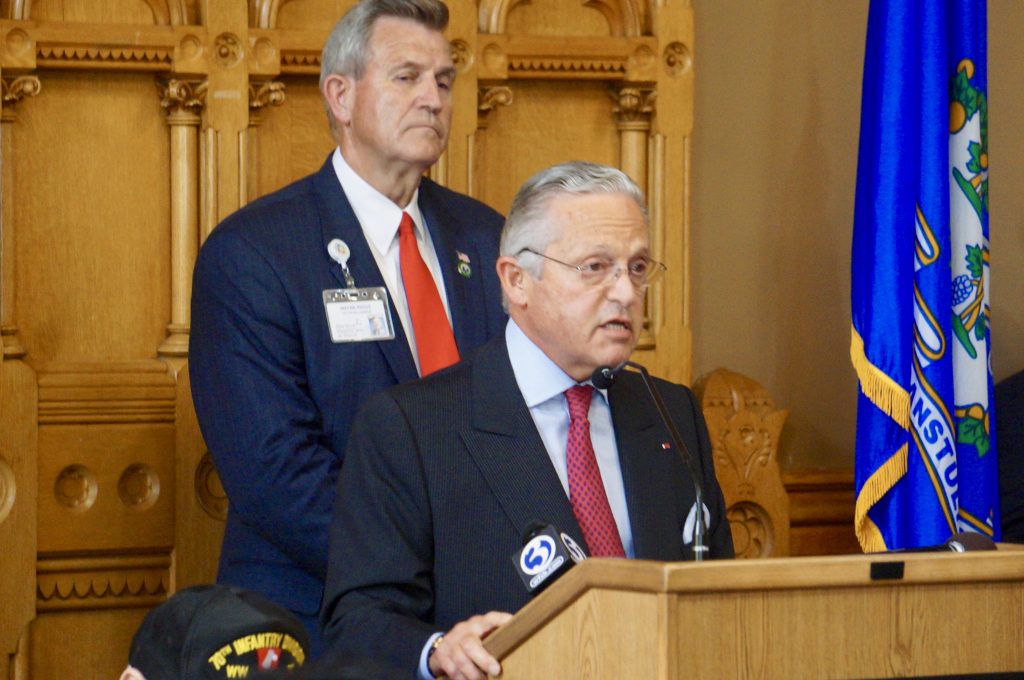 Guy Wildenstein, president of the American Society of the French Legion of Honor. Photo credit: RonniNewton 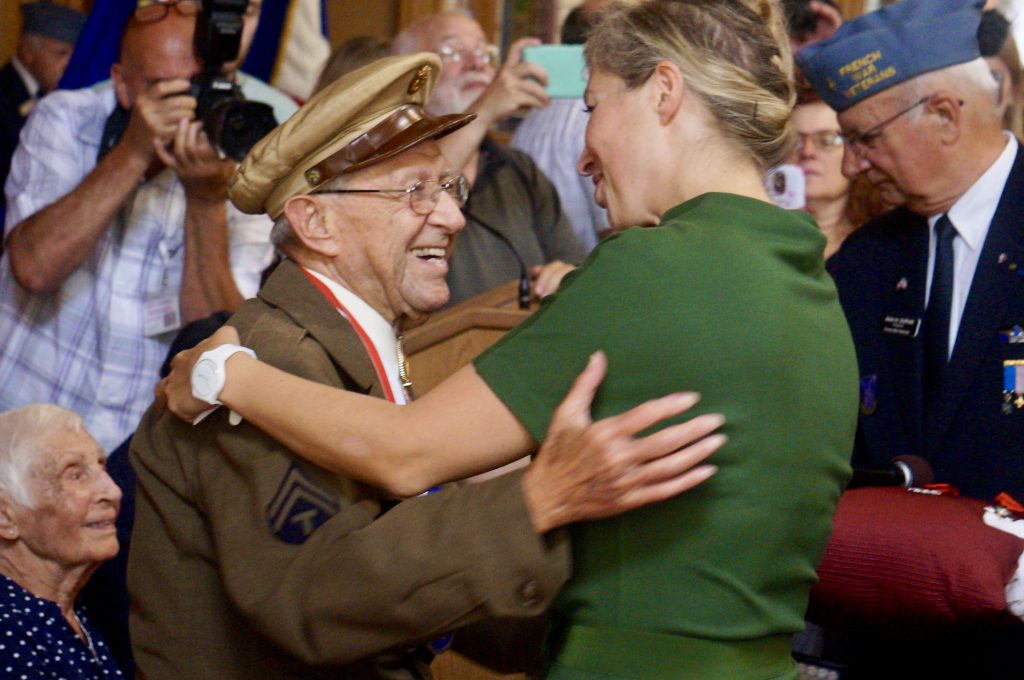