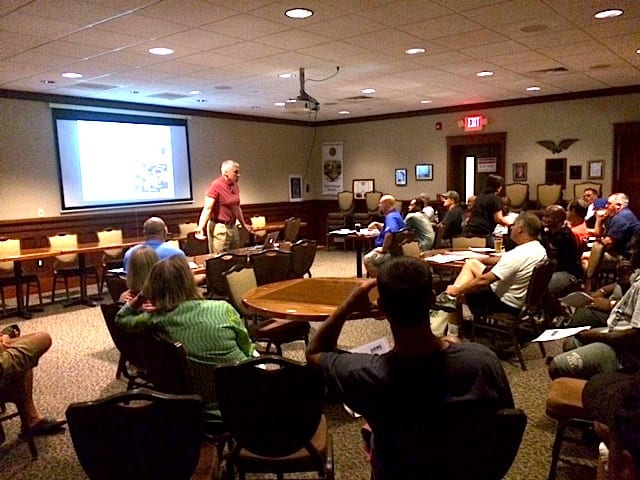 Prior to the start of the season, the West Hartford Youth Football League mandated several phases of safety-related training for its coaches.

The 2015 season for the West Hartford Youth Football League got underway on Aug. 30, but before coaches could officially set foot on the sidelines, they were required to undergo a safety plan focused on concussions and other potential football injuries.

Prior to the official beginning of the season, all coaches received notice of the required training from McConnell. “Deadline is game one if you want to coach. No kidding. The league will satisfy the Heads-Up requirements we’ve pledged to the parents and players,” McConnell wrote in an email.

A required training session for all tackle coaches, including assistants, was held on Aug. 18 at the American Legion on Raymond Road. It was organized by two parents, Dr. Peg O’Neill and Dr. Jenny Schwab, who are also both pediatricians. Dr. David Wang, a highly regarded sports physician and team doctor at Quinnipiac, led the presentation. Hall High School trainer Sabrena Lary, who also works with WHYFL, also contributed to the class.

“The training was terrific and enlightening,” said WHYFL President Ted Mancini. “It reinforced what we’ve been implementing and it also dispelled some rumors about the death of football. The dads – and moms – in this room love football because we know what is has done for us when we were growing up and what is does for our kids. Most football players play more then one sport, but the loyalty to this game has kept it thriving – even in West Hartford,” said Mancini.

Mancini is hopeful that the increased focus on training will not only make the game safer for the kids, but will also boost participation. “For the first time in years our numbers have risen from the year before. We actually lost more players over the last 15 years to soccer, fall baseball, and fall basketball then on account of concussions,” said Mancini.

The “Heads-Up” requirement to which McConnell referred in his email is a USA Football/NFL program. According to the program’s website, it’s a “comprehensive solution to help make the game better and safer. Rolled out as a pilot program in 2013, coaches and league administrators are being taught how to fit equipment, understand concussion awareness and teach tackling with players keeping their heads and eyes up.”

Part of being compliant with the Heads-Up program includes appointing a “player safety coach,” and Bruce Bourgoin has stepped into that role on behalf of WHYFL.

In addition to the concussion presentation, Bourgoin organized a coaching training session that took place at Sterling Field on Saturday, Aug. 22.

“The coaches in this league spend countless hours dedicated to leading these young kids and safety is emphasized in everything we do.  We are looking forward to another exciting and fun year,” Mancini said.