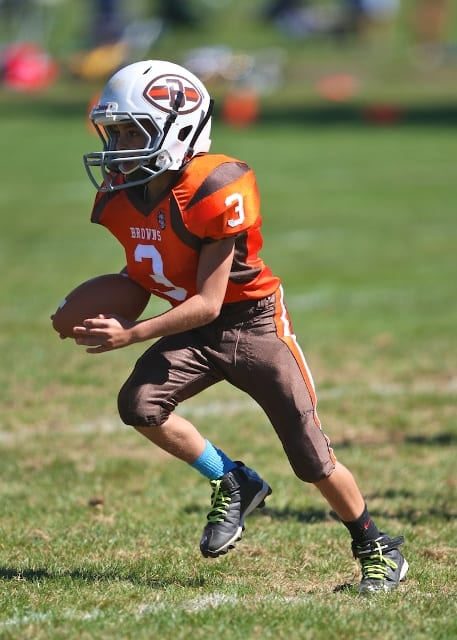 In addition, the league welcomed the return of cheerleading and an integrated schedule with the Farmington Valley Mudhogs and Southington Valley Midget Football League at all tackle division levels.

Special teams play on both sides was exceptional. The Jets’ Anthony McKeown had two long kick returns and a kickoff recovery which gave the Jets an extra procession. With some shifty moves and hard running, the Cowboys Ryan Gillis returned a kickoff for a touchdown, a play that shifted the momentum to the Cowboys.

The Jets were able to capitalized on McKeown’s long opening kick return when Isaac Ramsey put the first points of the day on the board by diving over the left pilon just beating the Cowboy defender to the goal line. The Jets ended up with the ball on the ensuing kickoff, and with tough running from QB Austin Bourgoin, they once again found the end-zone. Before the end of the first half, Isaac Ramsey scored what would be the Jets last touchdown. The Jets strong running game was the result of their exceptional offensive line, led by Caleb Ramsey, Aiden Baily and Mia Ficaro.

In the second half, the Cowboys responded with tough defense and forced two turnovers. Leading their defensive charge was Brady Cersosimo, Luke Jones, and Brayden Sohn. However, In the end it was the Jets’ stingy defense that prevailed. Lead by their Defensive Ends Bourgoin and Isaac Ramsey. Additionally, Luke Bouche, Maurice King, Khalil Shazel and Reynaldo “Rey Rey” Ruiz were pillars in the Jets Defense.

The Colts will move on to play Farmington Maroon (0-1), while the Patriots will lock horns with Farmington Blue (0-0).

The Panthers (1-0) are off this week, while the Southington Steelers will play the Watts Group Giants.

Farmington Blue (1-0) will move on to face the Northstar Wealth Management Raiders (0-1), while the Brewer Paving Eagles will play the Southington Patriots (1-0).