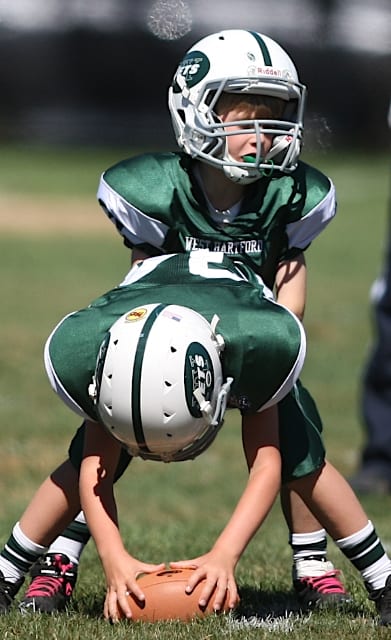 The West Hartford Youth Football League (WHYFL) kicked off Week 3 of its 61st season Sunday afternoon at Sterling Field in West Hartford, Farmington High School, and at Southington Recreation Park, with a full slate of games at the Flag (5, 6, and 7) Mighty Mite (7, 8 and 9 year olds), Pee Wee (10 and 11 year olds), and Pony (12, 13, and 14 year olds) divisions. In addition, the league welcomed the return of cheerleading and an integrated schedule with the Farmington Valley Mudhogs and Southington Valley Midget Football League at all tackle division levels.

After a back and forth first quarter, the Jets completed capped a long touchdown drive with an Isaac Ramsey score. The Jets received the second half kickoff and marched right down the field to score on an Anthony McKeown rush off tackle. Later in the fourth quarter, the Jets capped the scoring on another touchdown run by Isaac Ramsey up the middle.

Cole Cormier notched the Farmington Black score, dashing 40-yards to the end zone behind a solid blocking from his teammates. Stay strong Cole!

Despite the score, the Farmington Black defense was strong, and shut down the Jets’ air game, notching two interceptions. The Jets defense was also a tough matchup, with strong play from Austin Bourgoin, Reynaldo “Rey Rey” Ruiz, and Khalil Shazel.

The Jets (2-0) will return to Sterling Field next week to play the Watts Group Steelers (0-2), while Farmington Black (1-1) will play the Southington Lions (1-1).

The Bishop Photo Browns (2-1) move on to face the Fischman Orthodontics Cowboys (2-1), while the Dolphins (1-2) are off next week.

The Macca Plumbing Giants (2-1) will move on to face the West Hartford Health and Rehab Colts (2-1), while the Southington Panthers (2-1), will match up with the Dick’s Sporting Goods Patriots (0-2).

The Southington Steelers (2-1) will move on to face Farmington Maroon (0-3) while the West Hartford Health and Rehab Colts (2-1), will look to bounce back against the Macca Plumbing Giants (2-1).

Farmington Blue (2-0) has a bye next week, while Farmington Maroon (0-2), will lock horns with the Southington Steelers (2-1).

The Southington Patriots (3-0) will move on to play Farmington Blue (2-1), while the Northstar Wealth Partners Raiders (1-2) will match up with the Brewer Paving Eagles (1-2).

Farmington Blue (2-1) will move on to face the Southington Patriots (3-0), while Farmington Black will have a bye next week.

The Brewer Paving Eagles (1-2) will move on to face the Northstar Wealth Partner Raiders (1-2), while the Southington Chargers (0-2) will play the Park Tavern Chargers (1-1).