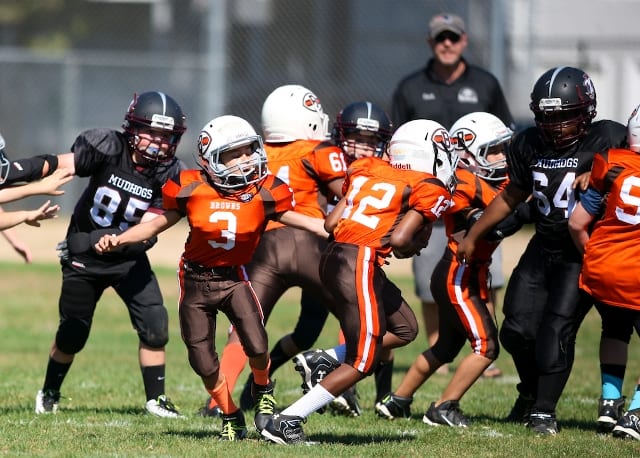 The West Hartford Youth Football League (WHYFL) kicked off Week 2 of its 61st season Sunday afternoon at Sterling Field in West Hartford, Farmington High School, and at Southington Recreation Park, with a full slate of games at the Flag (5,6, and 7) Mighty Mite (7, 8 and 9 year olds), Pee Wee (10 and 11 year olds), and Pony (12,13,14 year olds) divisions. In addition, the league welcomed the return of cheerleading and an integrated schedule with the Farmington Valley Mudhogs and Southington Valley Midget Football League at all tackle division levels.

Fischman Orthodontics Cowboys 21, Southington Dolphins 20 – The Fischman Orthodontics Cowboys fought their way back late in the 4th quarter to secure a victory over the Southington Dolphins Sunday at Sterling Field. Tyler Walsh, Ryan Gillis, and Eric Guzman each scored for the Cowboys. The Cowboys’ defense was led by Brady Cersosimo, Brayden Sohn, Noah Macko, Luke Jones and William Davis. Donovan Lampkin, Cameron Thomas, and Kurt Burkhart had key blocks throughout the game to help lead the team to victory.

Bye: The Beachland Tavern Jets (1-0) were off this week, and will return to action next weekend against Farmington Black (1-0).

The West Hartford Health & Rehab Colts leveraged a strong ground game and stingy defense on their way to a 26-0 victory over Farmington Maroon Sunday afternoon at Sterling Field.

The Southington Patriots (2-0) will move on to face the Northstar Wealth Partner Raiders (1-1), while the Brewer Paving Eagles (0-2) will play the Southington Chargers (0-1).

The Northstar Wealth Partners Raiders (1-1) will move on to face the Southington Patriots (2-0), while Farmington Blue (1-1) will lock Horns with Farmington Black (1-0).