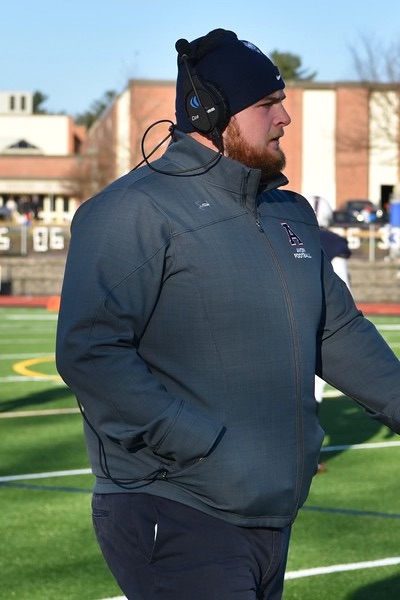 Avon High School did not have to look to far to find its next head football coach.

“When Jeff got the job at Avon in 2018, his son Matt called me and asked if I wanted to coach,” Smith said.

Smith and the younger Redman grew up as friends in West Hartford and both played football at Conard. After that, the duo enrolled at UConn where they worked side-by-side as team managers for the Huskies’ football program.

“I was very close with one of the coaches at UConn who taught me everything about coaching and football and I was a sponge for it,” Smith said.

A business teacher at Avon High School, Smith has been the offensive coordinator for Avon football the last four seasons, while Matt Redman was the defensive coordinator. As the new head coach, Smith is looking forward to continuing a winning tradition.

The team was 6-0 in conference play a season ago and lost a heartbreaking 7-6 playoff game to Branford. “Last year we had an incredible year capped off by a really great senior class that was responsible for re-starting the program over their 4 years. We have this base now to build upon as a program building off of that is really exciting,” the new coach said.

Luckily for Smith, Avon and Conard do not typically play against each other in football as Conard is in Class L and Avon is in Class M. But he did add that when Avon and Conard met on the baseball field, it “was like Hall-Conard as I knew everybody on the field.”

Taking over the Falcons job means following in the footsteps of someone that has been more than just a mentor to Smith. “It means so much to have this job. Jeff [Redman] to me is like a second father. He’s done so much for me and I see this as a chance to honor him and everything he has taught me.”

Smith said not a lot will change for his team, as he will continue to stress discipline, teamwork, and trust in each other. “Football in general as a sport is great because it teaches you so much about life, more than just the sport. You need 11 people to execute to be at your best.”

The job also means continuing to work with his lifelong friend Matt Redman, who will stay on as the defensive coordinator. “Matt and I have said we’re not going to do this without the other. It didn’t matter to either of us who is in charge. It has been both of us the whole time. Our friendship and working together has done great things for this program.”

Smith’s home debut will be the season opener when the Falcons host one of the state’s toughest teams in Bloomfield. The Warhawks’ only loss last season came in the Class S State Title Game against Cromwell/Portland.

Smith said he plans to continue his coaching duties with the Conard baseball team as well. They were 14-8 this past season, losing  in the second round of the Class LL Tournament  to eventual champion Fairfield-Warde.