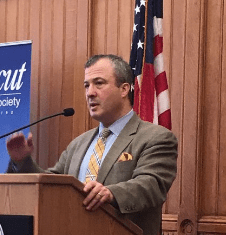 Jonathan Harris resigned Monday from his position as commissioner of the Department of Consumer Protection (DCP) Monday, with the official announcement from the office of Gov. Dannel P. Malloy indicating that Harris will “pursue other professional opportunities.”

Harris, 53, said Monday evening that he did not have any further announcements at this time. His name has recently surfaced on many lists of possible Democratic candidates for the 2018 governor’s race. Malloy announced last Thursday that he will not seek reelection in 2018.

Harris was asked about his plans following the governor’s announcement last week. According to the Hartford Courant, Harris said at the time that he had not made any final decisions about running, and “would not run if Lt. Gov. Nancy Wyman opts to enter the race,” according to the Courant adding, “I committed [that] to myself, to the governor, the lieutenant governor a long time ago.”

In an official statement, Harris said Monday, “I am grateful for the opportunity to serve the people and businesses of our great state as Commissioner of the Department of Consumer Protection. It has been extremely rewarding to work along-side so many dedicated and hardworking colleagues at DCP and our sister agencies. I’m confident that the good work we’ve accomplished together on behalf of Connecticut consumers and businesses will continue in the months and years ahead.”

Malloy, in a statement, thanked Harris for his advocacy on behalf of Connecticut residents and wished him good luck for the future. “During his time leading the Department of Consumer Protection, Jonathan has been diligent and effective protecting Connecticut consumers and businesses from unfair trade practices and unsafe products, while enforcing the federal and state laws that ensure a fair and regulated marketplace for all,” Malloy said.

Lt. Gov. Nancy Wyman also officially thanked Harris in a statement. “His leadership has helped us strengthen our response to the opioid epidemic, navigate the legalization of medical marijuana, and address crumbling foundations in eastern Connecticut. He’s been a strong and thoughtful advocate for residents, and a dedicated partner in service of the state.”

Harris has been commissioner of the Department of Consumer Protection since 2014, when he was appointed by Malloy. He also served as deputy treasurer under State Treasurer Denise Nappier, and as executive director of the Connecticut Democratic Party.

Harris, who has also practiced law in the private sector and operated a real estate and economic development company, previously served as State Senator in the 5th District, a position now occupied by Beth Bye. Before that he was mayor of West Hartford and a member of the Town Council.

DCP Deputy Commissioner Michelle H. Seagull will serve as acting commissioner, according to the announcement from the governor’s office.