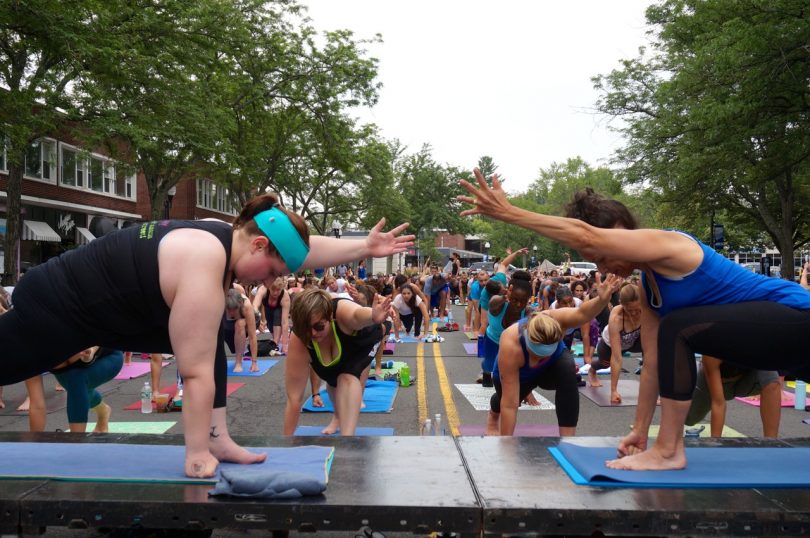 LaSalle Road in West Hartford Center will be closed to traffic Saturday morning, and temporarily renamed “Om Street,” as a crowd of all ages gathers for the free 75-minute yoga class that has become one of West Hartford’s signature summer activities.

When Om Street Yoga began in 2011, according to organizers from West Hartford Yoga the idea was to gather people from surrounding towns for a free outdoor yoga class. It has grown far beyond initial expectations, from a “whimsical outdoor class” to an event that includes yoga studios and other related businesses from throughout the region.

Last year there were more than 2,500 yogis stretched out on mats along LaSalle Road in West Hartford Center, filling the roadway from Farmington Avenue to Arapahoe, as they participated in the free outdoor practice and enjoyed the sprit of togetherness.

As one shop owner on LaSalle told West Hartford Yoga, “The good energy created by all those people doing yoga together has traveled and spread.”

West Hartford Yoga received the following feedback from one participant who attends every year: “Om Street has put yoga out there, right in the middle of the street … a free opportunity to try something new. Because yoga is for everybody, and there is a special energy created by bringing that many people together to intentionally move and breathe.”

Ruzansky will lead the class, which is appropriate for all levels. She will be assisted by other instructors from West Hartford Yoga, as well as instructors from more than 40 other studios and fitness centers who will be dispersed throughout the crowd to provide demonstrations and walking around to provide assistance.

Participants of all ages and abilities are welcome. In the past there have been many kids who have come with their parents – a great opportunity to be together.

Live music – on drums, gongs, and the didgeridoo – will be provided by Hands on Drumming.

There is no registration for the event, but participants should arrive at least 15 minutes ahead of time to secure a spot, and be sure to bring a yoga mat and water. Spaces near the front, the intersection of LaSalle Road and Farmington Avenue, fill up much earlier.

Parking is available in municipal lots.

ASL interpretation was offered for the first time last year, and will return this year for the benefit of deaf and hard-of-hearing yogis. A special section will be reserved near the interpreter.

“If you’re ready to bend, sweat, stretch, and smile on LaSalle Road, grab a mat, a towel, and some water and, “get your asana in the street,” Ruzansky said.

Count on “Namaste” being the word of the day on Saturday in West Hartford – and share your experience on social media with the official Hashtag: #omstreet.

The West Hartford Farmers Market will be open from 9 a.m. through 1 p.m. at the corner of LaSalle Road and Arapahoe, and yogis are encouraged to bring a reusable bag and stop after the practice for some fresh produce, flowers, or other local products. Other West Hartford Center businesses will welcome the influx of people as well.

Participating yoga studios, fitness centers, and associated businesses are being added daily. Visit the West Hartford Yoga website or email [email protected] for more information, and indicate your interest in attending on the Facebook event page.