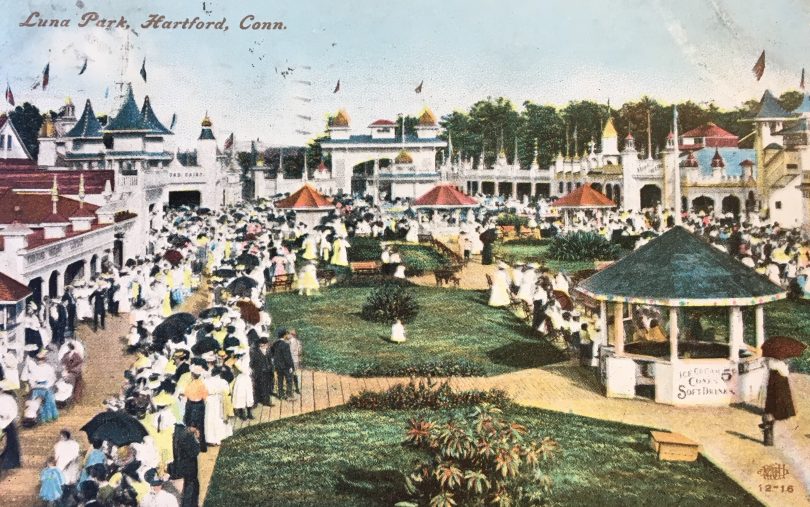 Would you believe that West Hartford once had its own amusement park?

Believe it or not, Luna Park once drew thousands of people to West Hartford every summer. Join the Noah Webster House & West Hartford Historical Society for this seasonally-appropriate lecture on Tuesday, Aug. 15, at 7 p.m., when historian Eugene E. Leach presents an especially amusing talk on the short and turbulent life of West Hartford’s Luna Park.

Dr. Leach will begin with the story of how and why amusement parks like Coney Island got started in the 1890s before describing in detail how, in 1906, West Hartford’s Luna Park appeared in a corner of the Charter Oak Racetrack grounds (roughly where Home Depot now stands on New Park Avenue).

Photographs and postcards will illustrate the mechanical rides, games, shows, contests, and concessions that drew many thousands to the park every summer – but never enough thousands to make the park profitable. A series of owners struggled to sell more tickets by remodeling the park from season to season, but respectable West Hartford-ites never welcomed this risqué venue in their midst and, finally, in 1910-1911, the hostility of town leaders contributed to shutting it down.

Leach taught U.S. history and American Studies at Trinity College until his retirement in 2012. He came to Trinity in 1975 with degrees from Harvard, Michigan, and Yale. He has served as director of American Studies, chair of the History Department, and director of the graduate programs in both fields. He is an officer, writer, and volunteer for a number of organizations devoted to Connecticut history and culture. When asked he lectures and gives short courses on topics in Connecticut history and national cultural history. Leach is currently at work on a study of Lincoln’s political philosophy.

This event is free to the public (suggested donation $5 per person), but seating is limited. Reservations are recommended. Visit noahwebster.yapsody.com to save your seat or call 860-521-5362 x 21.

The museum would like to thank the Hartford Foundation for Public Giving and the Greater Hartford Arts Council for their continued support.

The Noah Webster House & West Hartford Historical Society is a cultural destination where citizens can learn to understand and appreciate the past. The museum preserves the birthplace of Noah Webster, the founding father, educator, author, and lexicographer who taught generations of Americans what it means to be American. This National Historic Landmark is also a repository for West Hartford’s history, the community that molded Noah Webster’s future, and is still thriving over 250 years later. The historic house and exhibit spaces are open daily from 1 until 4 p.m. For information on the museum’s extensive school and public programs, please visit www.noahwebsterhouse.org or call (860) 521-5362.