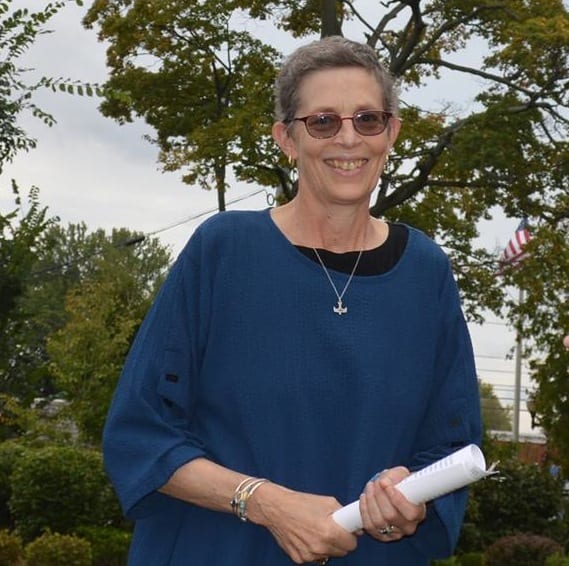 Tracey Wilson has combined all of her articles from West Hartford LIFE into a book. (we-ha.com file photo)

Tracey Wilson, West Hartford’s town historian and a retired social studies teacher, is turning her articles about the town into a book.

The line has been spoken so many times that it’s almost lost its meaning. And, to those who say it, there is also an air of arrogance attached to it. That, somehow, based on objective data a subjective conclusion can be reached that a town that now has more than 60,000 souls is a cut above the rest.

West Hartford is a special place.

It’s a line that has been uttered by politicians, businesspeople and mere lay folk, sometimes to an eye roll or two from the comment’s recipient.

And yet when Tracey Wilson, the retired Conard High teacher and longtime town historian, says it, one is inclined to believe her.

In addition to having taught a class in local history at Conard, Wilson documented West Hartford’s history in more than 140 articles that appeared in West Hartford LIFE monthly since 1999.

“I do believe West Hartford is a special place and I think the history helps people understand that,” Wilson said during an interview in her study in the Ridgewood Road home she shares with her wife, State Sen. Beth Bye. “It gives us a common language that brings people together.”

And Wilson’s latest project is an online book that compiles her work for LIFE in one place, “Life in West Hartford: A Connecticut Community’s History” (http://lifeinwesthartford.org), still in draft form that is accessible to anyone with an internet connection and just a little curiosity about West Hartford from the days of yore.

It’s a project borne out of personal crisis; Wilson was diagnosed with melanoma two years ago and was given five months to live.

Trying to find a way to help, Jack Dougherty, a professor with whom Wilson worked as an adjunct at her alma mater, Trinity College, approached her in the fall 2016 and told her he had a student who wanted to catalog all of her articles.

“He said, ‘I will help put this into an online book,’” Wilson said. “He has [an online book] called ‘On The Line,’ about suburbs and integration and segregation of schools and redlining.”

By January 2017, one of Dougherty’s students found and organized every article Wilson wrote for LIFE.

“At that time I was so sick I couldn’t look at it,” Wilson said. “I went to [the National Institute of Health] and had an immune transplant to try and address the melanoma with immunotherapy. That was a near-death experience. It didn’t work. I lost 25 pounds, l lost my appetite. … I just couldn’t do it. I didn’t think I could finish the project. I thought, ‘They could just do it without me.’”

By by November 2017, bolstered by a new treatment, Wilson had regained her energy and edited the articles. All that’s left is Wilson having to write two more articles – one of which is on Louise Duffy, the suffragette for whom an elementary school is named in town. And she is working with a staffer at the Noah Webster House to illustrate the online book.

She is nothing but grateful to be working on the project.

“I said to Jack, ‘I can’t believe you did this for me,’” she said. “He said, ‘Well when you were in such bad shape, I thought, what can I do to make you feel better?’ … It’s one of those things. How could I repay him? I don’t know. I guess it’s finishing the project,” Wilson said.

“I’m feeling really good. I’m on a new pill regimen. I’m holding on to every moment.”

Dismiss the history of West Hartford in front of Wilson at your own peril. Wilson said that a former state historian, Chris Collier, said, “You could teach U.S. history by teaching the history of Connecticut.”

She similarly believes that with the history of West Hartford.

If there is any common there in the dozens of articles that reveal West Hartford’s specialness, for lack of a better term, it’s the town’s sense of community, according to Wilson.

“Wherever you live here, you’re going to live pretty close to somebody. Whereas in Granby, some people live there because they don’t want anyone near them. They have 2-acre zoning. That can’t happen here. I do think there is a lot of community engagement – a vibrance. That really keeps public officials on their toes. That’s what democracy, with a small ‘d,’ is all about,” said Wilson.

One need only look at how the town names its schools — for local people, such as Bristow and Duffy, vital to the town’s history who might otherwise have been overlooked by other communities, Wilson said.

Yes, she has written about overarching themes, such as democracy in the 19th century, as well as seminal moments, like when William Hall traveled to Hartford to see Abraham Lincoln speak.

But where Wilson sees the true power of telling West Hartford’s history is in what might be considered smaller-scale stories. Her favorite is the story of Susan Gladstone, a West Hartford native and Pembroke student who traveled to Mississippi during the civil rights movement to get black people to register to vote. White college students were used for the civil rights movement to get press, Wilson said.

At the same time Gladstone was in Mississippi, her parents traveled to Washington, D.C., to help lobby the powers that be to pass the Civil Rights Act of 1964.

“They were a part of that,” Wilson said. After President Lyndon Johnson signed the bill into law, Gladstone stayed on in Mississippi and eventually enrolled at the University of Wisconsin and became a teacher. She met her future husband in Washington D.C., then moved to New Hampshire, Wilson said.

“[Susan] traveled in New Hampshire under a pseudonym talking to people in schools,” Wilson said. “She could not use her name due to the repercussions. I thought, ‘What a story.’ I found out she had papers at the University of Wisconsin about her work in the civil rights movement. There was a tape recording of her. Her sister got the recording and said she hadn’t heard her voice [in a long time]. It connected them. I spoke with her husband in New Hampshire. That was such a cool unraveling of a story that began [in West Hartford[ and it’s a national story.”

Further, Wilson said, it informs students “a sense of kids can do stuff.”

The story also encapsulates what Wilson did when she taught history: give a voice to people who otherwise might not have a voice during a pivotal moment in history.

“What a good historian does is they take story may be compelling, but they put it in the context of the time,” Wilson said. “There are some people who look at local history, and they sort of look down on it and say they’re antiquarians. So they’re just telling the story but they’re not connecting it to the larger story. They’re not contextualizing it. … I could place the story in the bigger story. On practical level, it builds community spirit.”

In addition to documenting the history of the town, Wilson also wrote the articles to make herself a better teacher.

“I always wanted to put myself in the position of my students,” Wilson says. “My students had deadlines and had to write stuff. I had a deadline every month. Sometimes I didn’t know what to write. So I had little tricks like ‘What happened 100 years ago today?’ 1905 in WeHa. Sometimes find a story and go with it. Or here is context going on 100 years ago. Sometimes I would have a story [right away] and a list of upcoming possibilities.”

The grand irony of Wilson’s work is that she has become the very thing she has spent her adult life documenting: a trailblazer and a vital, vibrant part of the town’s history.

Still, she brushes aside that notion when asked what she believed the online book says about her history.