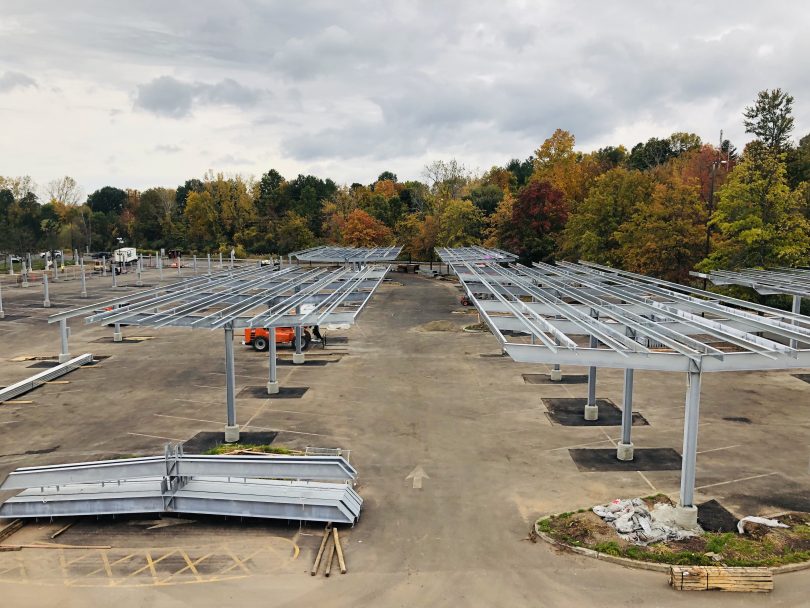 Installation of a ground-mount solar carport system is underway at Westfarms on the West Hartford/Farmington line. Courtesy photo

Solar panels in the process of being installed will generate 3.2 million kilowatt hours of power for the shopping center on the West Hartford/Farmington line. 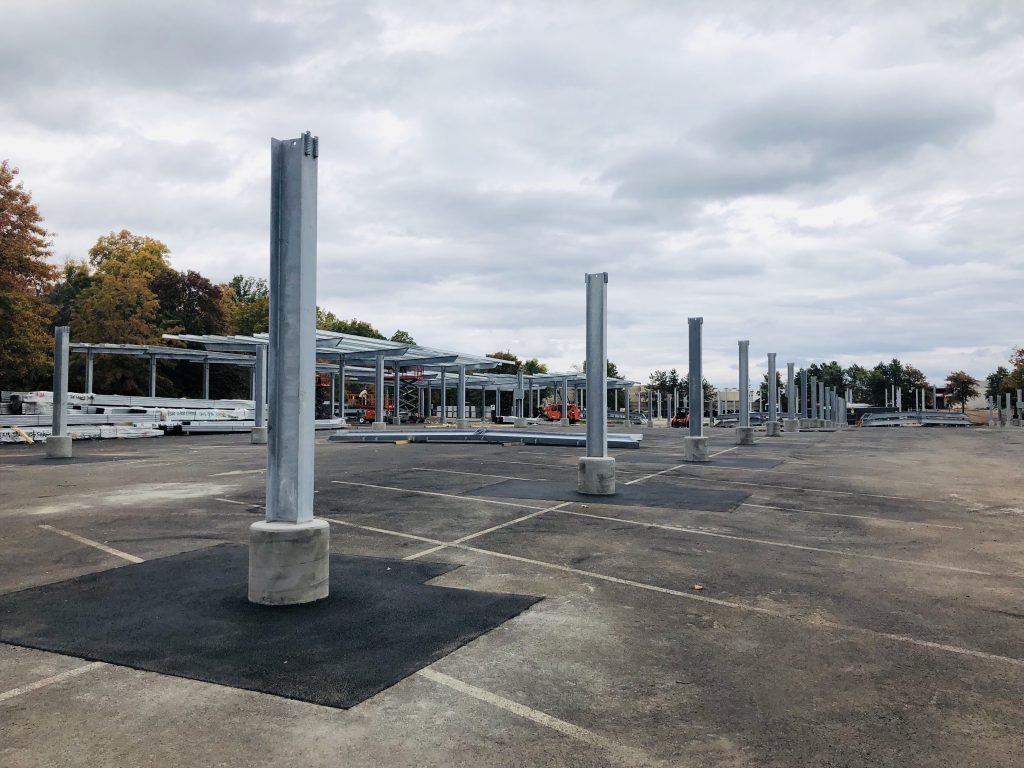 Installation of a ground-mount solar carport system is underway at Westfarms on the West Hartford/Farmington line. Courtesy photo

A Connecticut shopping center is further expanding what has already been an aggressive energy reduction plan with the announcement that a solar installation of 6,824 panels is under construction on the property which spans the West Hartford and Farmington town lines.

“This system will offset almost 100 percent of common area usage,” Steve Moore, director of facilities, energy and sustainability for Taubman Properties, the owner of Westfarms, said in a phone interview Thursday.

The solar installation includes a ground-mount carport system topped with solar panels, as well as panels that are being installed on the shopping center’s roof.

It is expected to be operational early in 2020, and to generate 3.2 million kilowatt hours of energy for the mall’s common areas.

“The clean, renewable energy generated from the state-of-the-art photovoltaic panels we’re installing will help us fulfill our commitment to sustainability,” Westfarms General Manager Kevin Keenan said in a statement. “The projected annual energy output of the system is 3.2-million kilowatt hours, enough to power 393 homes per year.”

“I am so pleased that Westfarms has begun the installation of nearly 7,000 solar panels on the shopping center’s roofs and parking fields,” West Hartford Mayor Shari Cantor said. “This is a well-planned and significant project that will have long lasting economic and environmental benefits.”

According to Moore, plans for the project have been under development for about two years, and formal plans were submitted about 18 months ago. This is the third solar installation that Taubman has undertaken, he said, with systems installed at Short Hills Mall in New Jersey and the Mall at Cherry Creek in Denver. Several more are in the works.

“It’s part of our overall sustainability plans and our goals,” Moore said, goals that include the reduction of energy and water usage as well as waste.

Westfarms spokesperson Amanda Sirica noted that 95 percent of the interior and exterior lighting at Westfarms has already been converted to LED, and 50 new parking light poles are being installed that will have LED fixtures.

Upgrades to replace 45 HVAC systems with energy-efficient units are underway, and a system that uses recycled rainwater stored in a pond on the southern edge of the property supplies enough water to irrigate more than 50 percent of the landscaping.

Over the past 10 years, Westfarms has reduced its energy usage by 41 percent according to management.

Sirica said many people in the community have been asking about the construction project and wondering if it was an extension to the mall. And while it’s not an expansion, everyone is really excited about it.

The ground-mount carport system – the first such system that Taubman has built – will be the first phase of the installation, Moore said.

The carport – a canopy of panels that will provide covered parking for shoppers and will not reduce the number of parking spaces – is being installed at one of the surface parking fields on the south side of Westfarms.

The roof-mounted solar panels will be installed as phase two of the project.

Since the boundary of West Hartford and Farmington runs right through Westfarms, Kristina Catterfield, facility director for Westfarms, has been involved in planning discussions about the solar installation with both local municipalities as well as state authorities and Eversource.

“So, we’ve been working closely with both municipalities and the state. Everyone recognizes the environmental and economic benefits and has been very supportive,” Catterfield said in a statement.

“The Town of West Hartford recognizes these benefits of solar energy and I commend Westfarms for their commitment to sustainability and thank the leadership team for their continued investment in the mall,” Cantor said.

“After years of analyzing the evolving efficiency and reliability of solar technology, we’re confident that the timing is right for us to move forward,” said Keenan. “Connecticut has been a leader in addressing sustainability, and we’re pleased to be able to contribute to the state’s continuing success.”

Moore said it’s possible the solar installation could generate enough power to feed back into the grid on occasion. Westfarms tenants, many of which have instituted their own energy saving programs, have not yet approached him about utilizing the solar power for their own purposes, but he said he would certainly discuss it.

There is also a possibility that Westfarms will expand its solar installation in the future.

“We definitely have thoughts of where we could expand, spending on the market, utility rates … and the ability to locate where it makes sense for everyone,” Moore said.

“It’s a great project. We’re really happy to have worked on it and we look forward to it being operational,” said Moore.