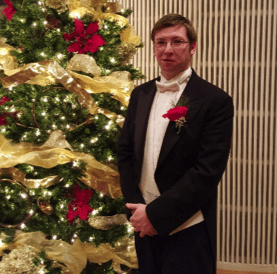 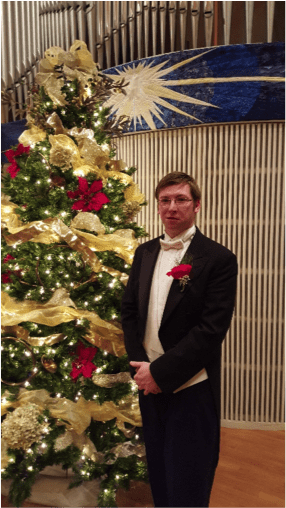 Westminster Presbyterian Church has hired Thomas Buckley as its new director of music. Buckley is an accomplished musician and singer with a background in secular and religious music. He will lead Westminster’s Christmas worship services on Dec. 24 at 5 p.m. and 9 p.m.

Since being appointed interim director in September, he has enlivened Westminster’s worship services with his talent, spirit and commitment to inspirational worship.

Buckley has versatile experience in opera and musical theater. During his career, he has been part of numerous performances, ranging from soloist parts in pieces such as Chichester Psalms, Mozart’s Requiem, and Messiah, to featured roles in regional productions such as Le Nozze di Figaro, A Chorus Line, and Chicago!. He made his European debut in Byrd’s Mass for Four Voices during a European concert tour of Italy. He has sung before the United Nations, President Barack Obama and Pope Francis.

Art Riihimaki, the clerk of the Session at Westminster, was part of the committee that interviewed Buckley for the interim position. “I was impressed with his musicality, his enthusiasm, and his energy,” he said. “As a member of the choir, I have seen him demonstrate those qualities. He inspires choir members to do our best, and his creativity has been evident during the short time he has been with us,” said Riihimaki.

Buckley’s background as a director includes work at Southern Connecticut State University, the Villagers Theatre, the Westport Country Playhouse, Stagedoor Manor, and numerous other theaters. He currently has a residency at Stagedoor Manor. He has a degree in Sacred Music/Piano and Voice from Westminster Choir College.

Westminster Presbyterian Church, founded in 1950, is located at 2080 Boulevard in West Hartford. Its regular schedule of worship at 8:30 a.m. and 10:30 a.m. on Sunday mornings. A member of Presbyterian Church USA or PC (USA), Westminster seeks to be a vital, engaging and inclusive family of faith that serves God by supporting each other on our spiritual journeys, sharing the gifts we have been given and demonstrating the love and justice of Christ in our community and world. For more information, visit www.westpresby.org.