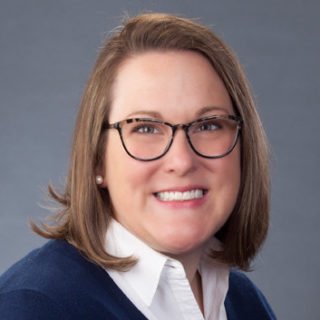 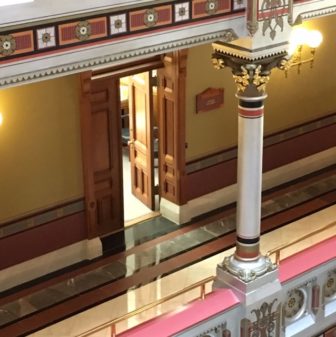 Door to the governor’s office. CTMirror.org

The invitation to the 4-year-old girl’s birthday party instructed guests to bring no gifts.

It was not an effort to impart a precocious lesson about materialism, but a nod to the state ethics code and the occupations of her parents: Colleen Flanagan Johnson, the senior adviser to Gov. Ned Lamont, and Michael Johnson, a lobbyist at Sullivan & LeShane.

Other lobbyists are in their social circle, and a gift from one of them would have violated state ethics rules barring gifts of more than $10 to a state official like Johnson Flanagan for other than a “life event,” such as a birth or wedding. Birthdays are not life events, not even for 4-year-olds who like unwrapping presents.

“Fear not,” Flanagan Johnson said, “the grandmas made up for it.”

Not every complication arising from the couple’s overlapping roles at the State Capitol will be so simply resolved. Connecticut’s ethics code has clear rules about gifts and direct financial gain, but less so about harder-to-value commodities so crucial to lobbyists, things like information, access to decision makers, and the perception of influence.

In consultation with the Office of State Ethics, the Lamont administration and Flanagan Johnson finalized their own rules this week: She will not meet with any of her husband’s two dozen clients, who include MGM Resorts International, a central player in the fight over casino expansion; and she and her husband will not talk about his clients and the issues on which he lobbies.

Further, she and Ryan Drajewicz, the governor’s chief of staff, will decide on a case by case basis if she needs to completely recuse herself from any issue “to avoid even the appearance of a potential conflict of interest.”

“I want to be on the far side of compliant,” said Drajewicz, who recruited Flanagan Johnson to the administration. “Wherever the line is, I want to be 10 to 15 yards north of it in every situation.”

Where that line is drawn is a matter of opinion, not law.

Under the ethics code, which is established by state laws that have not changed in decades, there is no legal bar to Flanagan Johnson acting on any issue of importance to her husband or his employer, Sullivan & LeShane.

One reason is that her husband is a salaried employee of Sullivan & LeShane, not an equity partner. The state’s ethics laws are narrow, focused on prohibiting public officials from using their state office to influence any state action for the direct financial benefit of themselves, their family members or any “business with which he is associated.”

Peter Lewandowski, the associate general counsel of the Office of State Ethnics, said in a letter to Flanagan Johnson that the rules she and Drajewicz have adopted “not just comply with the requirements of the Ethics Code, but go beyond these requirements.”

Lewandowski wrote that “in the event your husband becomes a partner of the lobbying firm and, as such, the business becomes a business with which you are associated, you will have to abstain from official action involving the firm and any of his clients if there is a reasonable likelihood that either the firm or your husband would derive financial benefit from your actions.”

Under state law, lobbying clients are prohibited from basing their fees on results. MGM is contracted this year to pay $150,000 to Sullivan & LeShane, one of at least three lobbying firms it has retained in the state.

“I think at this point, she has more of an optics issue,” Lewandowski said in an interview, adding that his office encourages public officials to think broadly about the appearance of conflicts, not just what is legal. “The higher you are in state government, the more exposed you are to public scrutiny.”

Flanagan Johnson, whose career has revolved around messaging and imaging in the worlds of politics, government and business, agreed.

“I was very clear that if I took this role I wanted to make sure that not only there wasn’t a conflict, but there wasn’t an appearance of a conflict with Mike and his clients,” she said. “I have been in politics long enough to see things that can appear to be conflicts, and I just wanted to take that off the table. It was important to me that we did it quickly and that we went above and beyond.”

She has provided Drajewicz and Robert Clark, the governor’s legal counsel, with the names of her husband’s clients, which also are a matter of public record at the Office of State Ethics.

“I trust her emphatically,” Drajewicz said. “And I know the governor does as well and trusts her judgment.”

Eight years ago, when Colleen Flanagan was the communications director for the first year of the administration of Gov. Dannel P. Malloy, her relationship with Michael Johnson was less problematic. The couple was not yet married, Flanagan was not in a policy making role in the governor’s office, and Johnson was then employed by Gallo & Robinson, a so-called “white hat” firm specializing in non-profit clients, including the ACLU and a gun-control group.

Johnson proposed in November 2011, the day after Flanagan left Malloy’s employ. He took her back to the Capitol, climbing to its dome to give her a diamond.They were were married a year later.

Now, Flanagan Johnson is the senior adviser to Lamont, sharing an office directly across from the governor with Paul Mounds, the administration’s chief operating officer. And Johnson, who says he already has had business conversations with the governor’s staff, has a client in the midst of the one of the most expensive lobbying battles in recent history – the fight over rights to casino expansion and, more recently, sports betting.

“First and foremost,” Johnson said, recalled his wife’s job offer from the administration, “we talked about staying in our respective lanes.”

MGM is fighting to block the Mashantucket Pequot and Mohegan tribal nations, the owners of the Foxwoods Resort Casino and Mohegan Sun in eastern Connecticut, from building a casino off I-91 in East Windsor to blunt the loss of market share to the casino MGM recently opened in nearby Springfield.

Andrew Doba, a spokesman for the tribes’ joint East Windsor project, said the tribes were untroubled by an MGM lobbyist being married to the governor’s senior adviser.

“In addition to being great people, Colleen and Mike are both total pros,” said Doba, himself a former spokesman for Malloy. “This is a non-issue for us.”

David Cappiello, one of the lobbyists for the tribes, said he can empathize with Flanagan Johnson and Johnson. Cappiello, a former state senator, is married to a lobbyist for the health insurer Anthem – a job his wife held while Cappiello still was in the Senate.

“For people who are professionals and who understand their individual roles, I don’t think it’s as difficult as people might think,” Cappiello said. “The more difficult part is you can’t control what others say. All you can do is control how you comport yourself.”

Reprinted with permission of The Connecticut Mirror. The authors can be reached at [email protected].