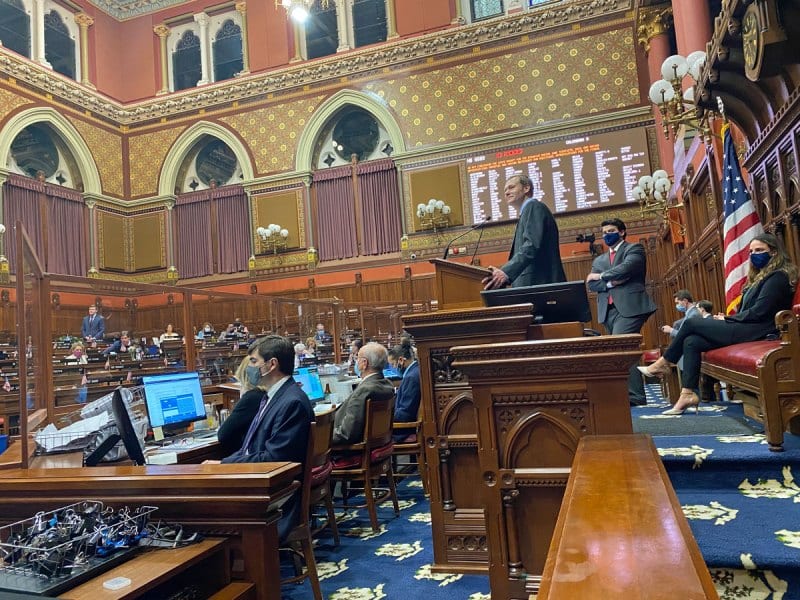 Speaker of the House Matt Ritter. Courtesy of CTNewsJunkie.com

On Friday the House was called back in for Special Session on June 16.

In some ways the 2021 session ended with a question mark: lawmakers are expected to reconvene in the coming weeks for a special session, leaving open the possibility that some formerly dead bills will be resurrected in an aircraft carrier budget implementer bill.

Most of the following bills are waiting to be acted upon by Gov. Ned Lamont, but some have already become law.

A wide-ranging attempt to curb an increase in traffic fatalities involving pedestrians and bicyclists made it through both chambers and is awaiting Lamont’s signature.

The bill removes a requirement for pedestrians to step into the road to signal their intent to use a crosswalk and require motorists to yield. Under the bill, they can wave from the side of the road. The legislation also allows towns and cities greater flexibility to set their own speed limits without seeking approval from the state.

Lawmakers passed the first update to Connecticut’s bottle return policy in four decades. Hoping to encourage residents to redeem their bottles and cans and reduce the burden on municipal recycling streams, the legislature doubled the bottle deposit fee to 10 cents. The change will go into effect in 2024. The new law also expanded the drinks that require a deposit to include hard ciders, hard seltzers, coffee drinks, sports drinks and energy drinks. That expansion begins in 2023.

“Based on what has happened in other states, this is going to result in a significant increase in redemption of these products throughout the state of Connecticut. It’s going to reduce trash and litter in our communities, it’s going to create jobs and it’s going to relieve some of the burden on municipalities,” Rep. Mike Demicco, D-Farmington, said.

Bills that automatically expunge criminal records for certain convictions and limit the length of time inmates can be put in solitary confinement passed the legislature this year.

Lawmakers passed another long-considered proposal which counts incarcerated people as members of the voting districts where they lived prior to imprisonment. Although the concept has come before the legislature for years, proponents had to pass the bill this year for it to have an impact on the once-a-decade redistricting process set to begin later in 2021.

There was also a proposal to make all phone calls to inmates free. Connecticut residents with loved ones in prison pay some of the highest rates in the country to stay in touch.

Sen. Gary Winfield, co-chair of the Judiciary Committee, said his work is not done.

Babies born in poverty will now have a program that guarantees when they reach the age of 18 and complete a financial education requirement, they will have financial help to further their education or purchase a home or even contribute toward their retirement.

“The passage of CT Baby Bonds in the Senate and the House of Representatives comes at a critical juncture in our state’s history: While Connecticut has the highest annual income per capita in the country, it also has one of the highest rates of income inequality in the nation and economic disparities, including the wealth gap have been widening over the past decade,” Treasurer Shawn Wooden said.

The two federally-recognized tribes and the CT Lottery Corporation will expand gambling in Connecticut as soon as they are able to get federal approval for revenue sharing with the state.

Under the proposal, the Connecticut Lottery also will be allowed to run online and sports betting, in addition to opening 15 retail locations, including one each in Hartford and Bridgeport.

The state of Connecticut will get a cut of those gambling revenues. iGaming will come with a 18% tax rate for the first five years and then increase to 20% for the remainder of the 10-year deal. The state will get 13.75% on gross gaming revenue from sports wagering.

A bill is headed to Lamont’s desk that would eliminate the June 30, 2022, expiration date of the Connecticut Foundation Solutions Indemnity Company, which manages funds to assist property owners whose foundations are afflicted by pyrrhotite, a mineral ruining concrete in some building foundations.

The problem has been especially acute in northeastern Connecticut where crumbling foundations have financially ruined some homeowners and impacted local property tax revenues.

For the first time in five years, lawmakers passed a bipartisan budget that doesn’t increase taxes.

Almost every tax increase included in the initial Democratic budget proposal was eliminated through negotiations. However, a controversial new fee that Lamont proposed on large commercial trucks was approved as a separate bill.

Nursing home residents who died at a higher rate from COVID-19 than the general population received some protections from lawmakers this year. Lawmakers passed a sweeping bill that requires nursing homes to maintain at least a two-month supply of personal protective equipment for their staff and certain staffing levels. It also requires better emergency planning.

“For over a year, nursing home residents, staff, family members, the Long-Term Care Ombudsman, and AARP Connecticut have advocated for many of the important reforms addressed in this bill, such as improved staffing levels, enhanced infection control measures, requiring stockpiles of personal protective equipment, and better emergency planning,” Nora Duncan, state director of the AARP, said.

It was a repeat performance this year for the public option, which was opposed by the insurance industry. A bill promoted by state Comptroller Kevin Lembo that would have allowed his office to create a state-run health insurance option for small businesses and nonprofits that would compete with plans currently offered by the industry. It died in May.

Lembo credited the health insurance industry for its lobbying and advertising efforts against the legislation as one of the reasons for its death.

“The people of Connecticut should find that unacceptable. They should also be very concerned that it worked,” Lembo said. Lawmakers blamed Lamont for not supporting it.

Lamont’s proposal to tax the industry $50 million to help pay for greater subsidies for the poor also failed to gain any traction.

Lawmakers declined to act on a controversial multistate cap-and-invest program backed by the governor, which would have required fuel suppliers to buy permits for the pollution that results from the fuel they sell. The plan was designed to reduce carbon emissions and was expected to result in fuel sellers passing extra costs to consumers at the pump. Lamont signed onto the program late last year, but needed approval from the legislature to implement it. He did not get it. Republicans and fuel suppliers launched an aggressive opposition campaign, arguing the program amounted to a gas tax.

“TCI is the most significant climate legislation before the General Assembly in a decade and is supported by a large majority of Connecticut’s residents. We know there are champions for TCI in both the House and Senate, so it’s been disappointing to see legislative leadership fail to take the action that’s urgently needed to address transportation pollution. TCI includes a commitment to prioritize investment in the urban and rural communities that need relief from air pollution and need better transportation access most,” Charles Rothenberger, a climate lawyer with the environmental advocacy group Save the Sound, said.

On Thursday, Lamont said he would urge lawmakers to take the matter up during the upcoming special session.

A bill to allow the direct-to-consumer sales of certain brands of all-electric vehicles, bypassing state dealership laws, died on the Senate calendar again this year.

“Passage of SB 127 would have permitted Connecticut consumers to purchase electric vehicles directly from manufacturers. This bill had great potential to advance economic recovery, while meeting the state’s climate and electric vehicle goals,” Rothenberger said. “We are disappointed that the bill was not able to overcome the opposition of the state’s legacy automobile dealerships.”

The session was a mixed bag for an aggressive agenda of voting policy changes. Lawmakers gave a bipartisan second approval to a resolution that will let voters decide next year whether to consider changing the constitution to allow for early voting.

Another resolution, which would allow voters to consider amending the constitution to remove restrictions on the use of absentee ballots also passed, but not by the wide margins proponents were hoping for. The vote count made a difference: 75% support from lawmakers in both chambers could have put the question on the ballot for next year’s election. As it stands now, the resolution will need to be approved by the legislature again after the next election. That means the soonest voters could weigh in would be 2024.

Meanwhile, an expansive update of Connecticut’s voting laws was passed by the Senate but never raised by the House. The bill would have restored voting rights to parolees, made permanent the absentee ballot drop boxes installed around the state during the pandemic, and expanded an automatic voter registration program.

House leaders said they were waiting on fixes from the Senate to address concerns from Freedom of Information advocates about provisions in the bill. The changes never came and the proposal died at adjournment. Leaders of both chambers say they plan to raise the concept again in the upcoming special session.

Secretary of the State Denise Merrill said it was a productive session.

“As other states like Florida, Georgia, and Texas have moved to restrict voting rights, Connecticut has led the way to increase voters’ access to the ballot box and to the electoral process. This legislative session, we took significant steps to make it easier for voters to cast their ballots and make their voices heard,” Merrill said.